China plans to come from behind to win the global battery recycling industry, thanks to new policies 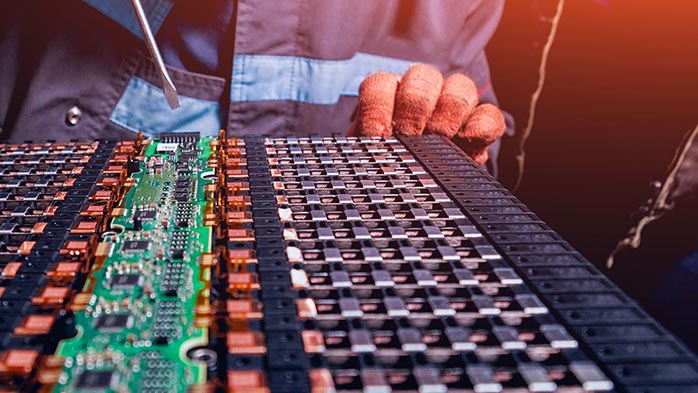 Lithium-ion battery (LIB) recycling is hardly new in the developed world, with notable industry players and well-established regulations in place to process the countless 3-cell batteries reaching the scrap-heap each day from portable electronics.


However, the lack of explicit regulations (EU excluded) and integral recycling networks for the nascent secondary market of electric vehicle (xEV) batteries means that the playing field has once again been levelled; and China is positioning itself to capitalize on the opportunity.

Are proper regulations in place in China?

China is the world’s largest consumer of xEVs1, representing 30% of global sales in 2018, and this share is expected to double by 2030. In a previous Insight2, CRU showed that a vast quantity of used LIB will enter the scrap pool during this timeframe, causing severe pollution if not treated properly. Against this backdrop, the Chinese government has begun to implement a series of regulations aimed at promoting construction of an end-of-life vehicle (ELV) battery recycling industry that is environmentally-friendly, resource-saving and economically-beneficial.

The first regulation3 mentioning ELV battery recycling was issued by the General Office of the State Council in 2012. The regulation requires the construction of a recycling system, clarifies the rights, roles and responsibilities of each party, and provides guidance on recycling and second-life options. More explicit and detailed regulations were issued in the following years, providing further detail and clarity on responsibilities. They also intended to show: how to trace xEV batteries through their life cycle; how to establish an efficient recycling system; and how to maximize utilization of the residual value of ELV batteries.

The table below provides some of the more recent regulations governing this sector: 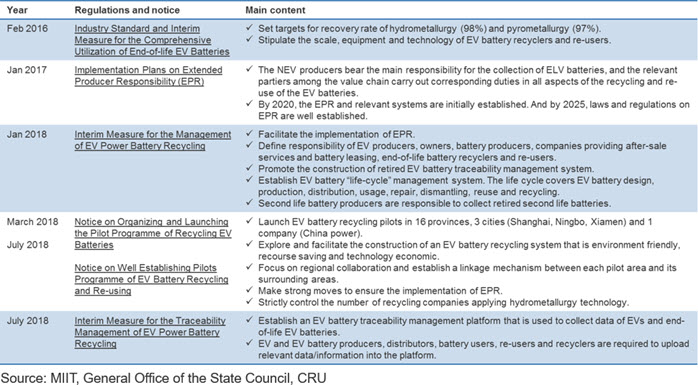 China’s Ministry of Industry and Information Technology (MIIT) is currently updating its regulations and standards on the acceptable levels of emissions and pollution from LIB recycling, which currently falls under general policies for solid waste. We expect tighter and more comprehensive regulations for this sector from MIIT going forward.

National standards, combined with regulations, are intended to support a breakthrough in the ELV battery recycling industry in China.

Pursuant to government stipulations, battery producers (such as CATL, JHD and BAK), recyclers/re-users (GEM, Brunp, Ganpower, Camel, Zhongtianhongli), battery metal miners and refineries (Huayou, Ganfeng) have each started to develop capacity for their mandated portions of the ELV battery recycling chain. Car manufacturers are actively seeking opportunities to collaborate with recyclers: example partnerships include Beijing Electric Vehicle with Huayou and Ganpower, BYD with GEM, and SAIC Motor with CATL.

China Power has been exploring second-life opportunities for ELV batteries in stationary storage since 2015. The company has established 200,000 base stations, and found a use for 2GWh of second-life batteries in the period 2015-2018. In addition, R&D companies such as Beijing Articore Battery and Xunchi are exploring ELV battery assessments and an integrated system containing battery traceability management, enterprise resource planning (ERP) and Manufacturing execution system (MES), to improve the efficiency of ELV battery recycling and second-life initatives. Current R&D is mainly focused on limiting emissions and pollution from the recycling/disintegration process, improving leaching efficiency, improving extracted metal purity, safety, and cost reduction. 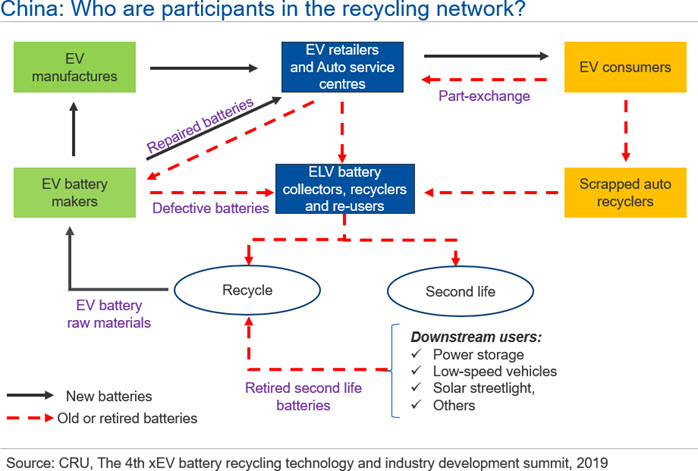 The European Union has regulations alongside a fairly comprehensive recycling network for retired EVs (e.g. ARN in the Netherlands, and CarTakeBack in the UK). The Regulation of Batteries Directive (2006) bans landfill disposal of ELV batteries and establish rules for their collection, recycling, treatment and disposal. Meanwhile, the Extended Producer Responsibility (EPR) assigned the responsibility of recycling ELV batteries to producers4. In Japan, automakers proactively participate in battery recycling. In South Korea, the battery association has collaborated with the National University to pioneer on ELV battery recycling.

In the United States and Australia, there are no regulations that specifically address ELV batteries, and as such the recycling system may still take time to develop. However, the US government has initiated a research centre called the ReCell Center to help the country grow a competitive recycling industry and reduce its reliance on foreign sources of battery materials; meanwhile, private company Lithium Australia has teamed up with Envirostream Australia and ANSTO Minerals to experiment on spent battery recycling, especially for LFPs.

Overall, there has not been an explicit, overarching framework of rules yet imposed for the second use of ELV batteries outside of China; but some car manufacturers have started to invest in facilities to reassemble ELV batteries for re-use in energy storage. Mercedes-Benz Energy has installed three such storage systems with a total energy of 40 MWh, powered by second-life batteries, and the company is currently cooperating with Beijing Electric Vehicles to build another system in China.

A clear summary of the regulatory field and major operators is provided below: 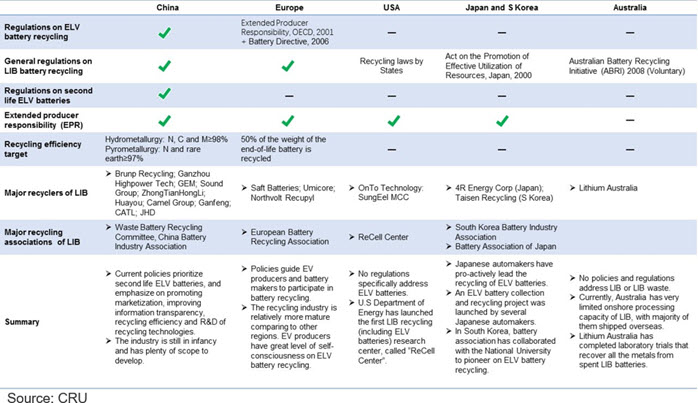 CRU expects these regulations to facilitate a sustainable and high-quality development of China’s ELV battery recycling industry, but the following challenges and bottlenecks may set upper bounds to the efficiency and integration of such systems in the country.

CRU is in the process of developing an ELV Battery Recycling Model that will quantify valuable metals that can be recovered globally over the long term. If you are interested in the model, please do not hesitate to contact us via the form below.