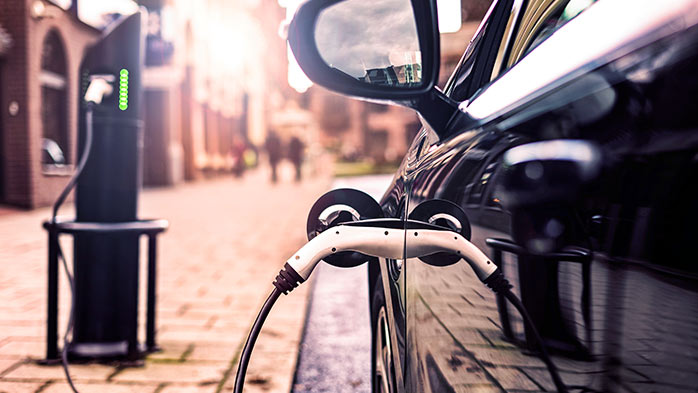 In China, the booming electric vehicle industry is now seeing the first trickles of a portentous wave of end-of-life vehicle (ELV) batteries, which in time is sure to reshape supply dynamics for lithium, cobalt and nickel salts.


An efficient recycling network, overseen by effective regulations, would help the country to both avoid pollution from hazardous substances (e.g. inefficient recycling of lead-acid battery) and decrease its reliance on battery raw material imports.

Purpose of recycling
Since 2016, the policy-backed electromobility revolution has tremendously stimulated growth of electric vehicle (xEV) sales. Globally, sales of light duty electric vehicles (LDV) doubled in the period 2015-2018, with China contributing 53% of the growth. By 2030, we expect global annual xEV sales to surpass 30 million units - meaning roughly 30% of the vehicles sold worldwide would be electric. With an estimated current battery life of 4-6 years in China, and 7-9 years in the US and EU, this surge in sales heralds a looming wave of ELV batteries that is just now beginning to trickle into circulation.

Barring damage or total failure, “end-of-life” can be contentious to define. Batteries in BEVs are generally considered to reach the end of their useful life when their capacity declines to <80% of their initial design, with the resultant impact on vehicle range. Thereupon, they join the scrap pool, and can be assessed to be either re-used (second life: applying ELV batteries in areas with lower requirement on energy density, such as grid storage) or recycled (recovering the valuable components from the batteries, such as the separators and cathode materials, for use as inputs into new battery production).

There are three key benefits of recycling ELV batteries:

1. Reduce exposure to hazardous substances: Used ELV batteries are a source of heavy metal pollutants (the cathode materials) and chemical hazards (the electrolyte, which is toxic, highly corrosive and can cause fluorine pollution). Separators are made out of non-degradable PP/PE; and when coated, their binders contain PVDF, VDP and EPD, which cause organic and fluorine pollution. Accordingly, governments across the world have issued policies to ban the simple disposal of ELV batteries; however, only few countries – such as China – have enacted regulations or national standards to target ELV battery recycling and re-use.

2. Improved cost of new batteries (NCM and NCA): Certain components, such as cathode materials, can be produced with recycled metals that theoretically are lower cost. For example, the business costs of using recycled ELV batteries to produce nickel sulphate, either through hydrometallurgy or pyrometallurgy, is conceivably about $7000/t; this is roughly equivalent to producing nickel sulphate from MHP/MSP based on laterite ores, and ~$4000/t lower than direct dissolution of nickel metal.

3. Alleviate material scarcity and interdependence: Recycling can help each nation to have its own source of battery materials supply and reduce reliance on imports. In China, nickel ore production in 2018 was 96 kt (Ni contained), whilst primary nickel consumption was 1167 kt, giving a self-sufficiency ratio of 8%: in other words, China had to import 92% to meet domestic demand. On cobalt, China’s self-sufficiency ratio is even lower, circa just 2% in 2018.

Recycle or second life?
Currently, NMC, NCA and LFP batteries are commonly used in xEVs, with NMC dominating the applications in LDV and HDV, and LFP commonly being adopted in buses. A number of factors determine whether the ELV batteries are feasible for recycling or second life, including 1) the battery’s residual cycle life, and 2) the economic feasibility of recycling raw materials.

LFP batteries are one of the cheapest battery chemistries, and can continue to have a long lifespan after retirement from EVs. LFPs with 80% of residual capacity can survive an additional 2000-6000 cycles before their residual capacity reduces to 20%. For the same effect, NCM and NCA batteries have a residual cycle life of 800-2000 cycles. This gives LFP a considerable advantage in the various proposed second life programs, such as stationary storage, low-speed electrical vehicles, and solar streetlights.

Meanwhile, we estimate the costs of recycling LFP batteries to be around 7 $/kWh, while the value from selling the recoverable materials – lithium – is only 5 $/kWh , making the activity a net loss at present, but noting R&D efforts to improve in this area. As it stands, the price of lithium carbonate would have to exceed $146,000/t for LFP recycling to be economically viable. In contrast, NCM and NCA batteries contain several high value metals – lithium, cobalt and nickel – and so have a relatively high economic feasibility of recycling.

The chart below shows a promising and efficient end-of-life activity framework that is under development: 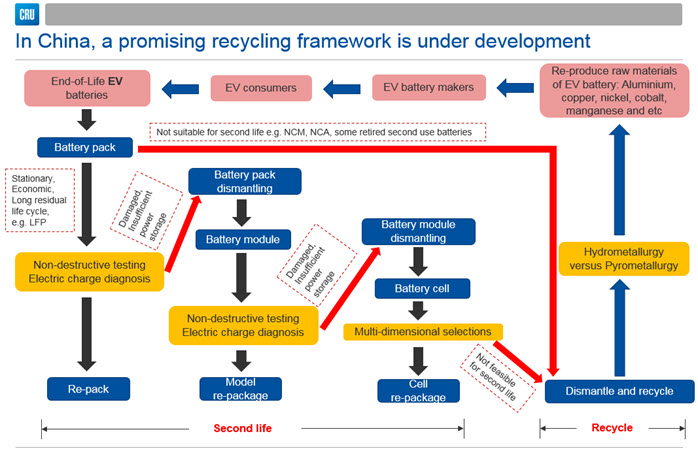 Metals generated from recycling
In the following analysis, CRU has roughly quantified the volumes passing through ELV activities in China over the 2018-2030 period, noting the following key assumptions:

Based on design capacity, we expect the pool of ELV batteries in China to grow at a CAGR of 34% 2019-2030, reaching 341 GWh by the end of the period. LFP batteries dominate the ELV pool at present, representing 87% of total ELV batteries in 2019. However, their share will quickly be seized by NMC and NCA batteries, which have exploded in popularity particularly for LDV use. By 2030, therefore, the share of LFP batteries in the ELV pool is expected to shrink to just 13%, while the share of NMC and NCA batteries reaching end-of-life will soar to 86% of the total, from only 2% in 2018.

By multiplying the headline figures by the intensity of material usage, we can obtain China’s secondary nickel and cobalt production from the xEV sector. We find that, under the assumptions noted above, secondary nickel production could reach 151 kt per annum by 2030, with cobalt touching 55 kt; and that these volumes would account for 35% and 42% of Chinese xEV battery demand, respectively. This would therefore greatly reduce the share coming from primary sources, although imports may still rise on an absolute basis. 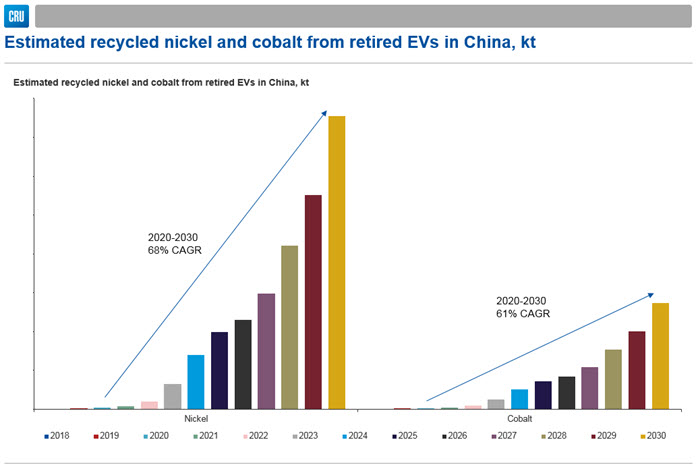 CRU is in the process of developing an ELV Battery Recycling Model that will quantify valuable metals that can be recovered globally over the long term. If you are interested in the model, please do not hesitate to contact us.