Expect India to rebound in 2020: less than 5% growth is not the new norm 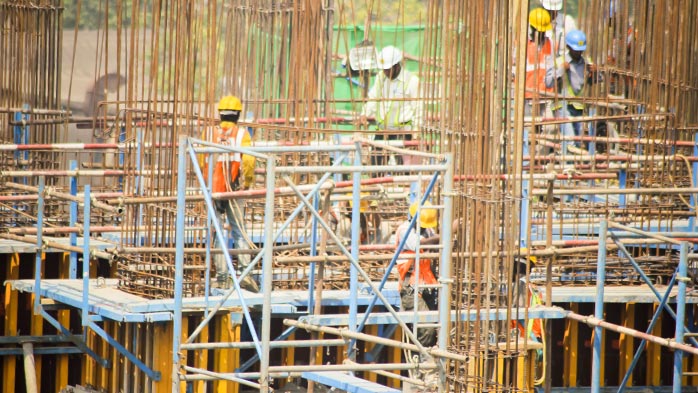 With Q3 GDP data coming in at 4.5%, concerns are rising about prospects for India. We are not worried.


Our narrative is for growth in 2019 to be the low point, explained by ongoing troubles in the financial sector, temporary uncertainty emanating from this year’s election and changes to auto market standards. We expect India to return to the growth fast lane, averaging ~7% over the next five years. Our forecast is based on assumptions that the government will act boldly to set the direction of future policy, and those policies to encourage consumers and companies to spend more. However, risks to growth lie to the downside, where the current weakness may drag its feet into 2020.

Indian growth hits a speed bump in 2019
In the words of Abhijit Banerjee, the 2019 Nobel Prize in Economics, “I do not know why India is growing, I know the reasons why it shouldn’t grow” (Watson Institute, Oct 16 2019). GDP growth for Q3 released today marks the sixth consecutive quarter of declining growth, at 4.5%. This was slightly lower than the 5% expected by us and other leading forecasters. Despite this downside surprise, CRU expects growth in India to average just under 5.5% y/y in 2019, rising to average 7.0% over the next 5 years.

Our view is that the weak growth in 2019, is a speed bump, due to systemic fragility in the financial sector and temporary uncertainty resulting from this year’s election and reforms in the auto market. We expect a recovery of growth in 2020, as policies take time to be effective. 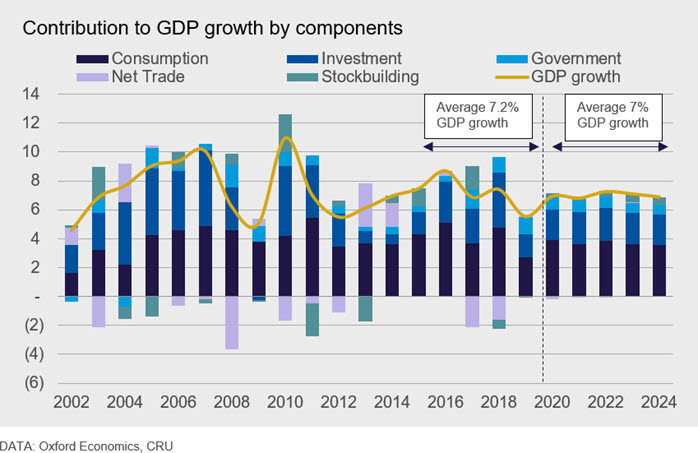 A weak 2019 explained by structural and temporary factors
2019 has been an unequivocally weak for growth. This year, the Indian economy is facing a collapse of investment and the weakest consumption in 14 years in terms of contribution to GDP growth (chart above). Exports are not growing. Overall the situation is concerning and this is notable in commodity end use sectors: the automotive industry is facing the worst slowdown in two decades with total automotive production dropping to -24.4% y/y in October. Latest data also show a contraction in factory output, reaching -4.3% y/y for Industrial Production and a negative growth for each of its three components (manufacturing, mining and utilities). Construction is also slowing. 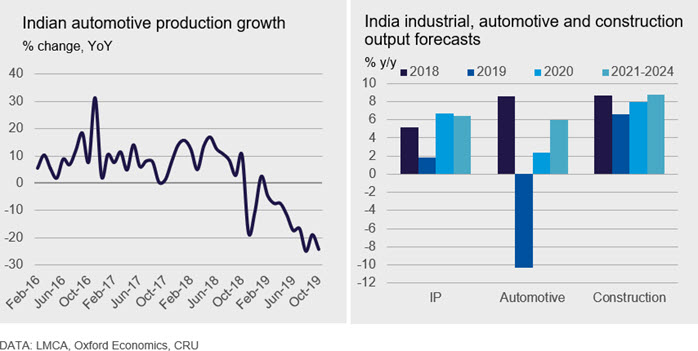 Our view is that the 2019 slowdown can be explained by a combination of temporary factors (2018 a cyclical high, elections, emission standards announcements) and structural factors (a fragile financial sector). These factors are detailed below.

Growth in 2018 reached a cyclical high - this was attributed to a recovery following two important structural changes – the introduction of the nationwide goods and services tax (GST) in 2017 and the withdrawal of large bank notes from circulation to curb fraud (demonetisation) in 2016. So, it was natural to expect some slowing of growth in 2019 (e.g. IMF article IV) from this cyclical high.

Elections led the wind of uncertainty to blow

The Indian general election was held between April and May 2019 creating significant uncertainty. Between December 2018 and March 2019, opinion polls from various agencies gauging voting intentions (Time Now-VMR, APB News among others) predicted no clear majority, with the possibility of a hung parliament. Therefore, the Indian economy suffered from what has been described by the media as policy paralysis for 6 months. To this extent, both the Business Expectation Index (BEI) and consumer’s expectations dropped throughout 2019 from 116 to 102 for the former and from 114 to 85 for the latter. Such weakness in sentiment has worked to put downward pressure on consumption and investment.

There have been several changes affecting the auto industry, which has created confusion and uncertainty. We feel this can explain a good part of the 2019 weakness. Firstly, the roadmap for the implementation of the Bharat stage emission standards (BSES) changed direction several times. In 2016 the authorities decided to skip a step (skip BS-V and move directly to BS-VI); and in 2018 they decided to bring forward the implementation in the National Capital region to 2019, from 2020. This created uncertainty amongst automotive suppliers and consumers, leading to delayed purchases. Second, the new axle load norms adopted in the end of 2018 reduced the necessity for additional vehicles. Third, the IRDAI (Insurance Regulatory and Development Authority) announced higher premium rates for third-party car liability insurance cover effective from June 2019. Finally, credit availability was restricted leading to weak demand and dropping production. 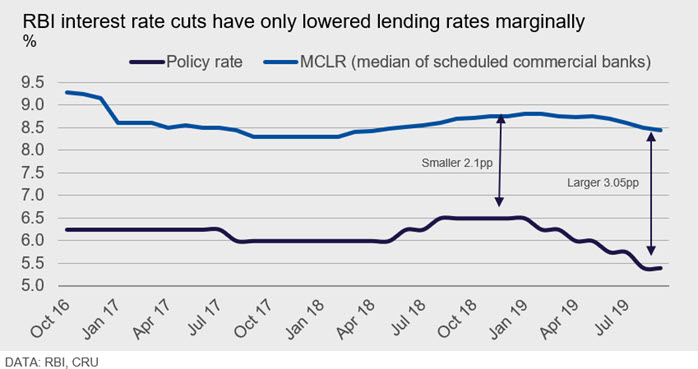 Banks and the non-bank financial corporations (NBFC) have been facing regulatory and funding challenges that have resulted in fewer loans being offered and at higher interest rates. For example, lending rates have remained at around 8.5% on average over the past year and have not been reduced by as much as the Reserve Bank of India has cut its interest rates this year. This growing differential between the central bank interest rate and the effective lending rate, is absorbed into bank profits, which is necessary for banks to address their rising non-performing loans (NPL) ratio, which reached more than 11% in 2018. 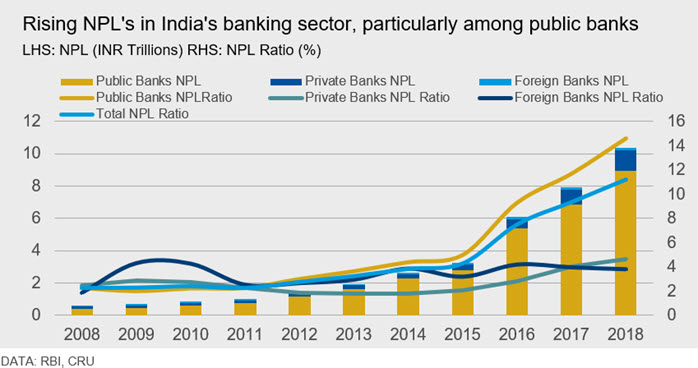 NBFCs have suffered from a critical lack of funding throughout the past 18 months. The default of IL&FS in September 2018 acted to undermine views on the sector’s resilience. And while NBFC credit availability is reported to have improved recently, overall, we judge that this is a priority for India to overcome its embedded credit issues and more broadly to improve its financial sector.

The Prime Minister Narendra Modi succeeded in gaining a BJP majority in the 2019 general elections. Along with the end of uncertainty, the government’s new reforms and policy direction will shape medium term economic growth:

Actions and monetary policy to deal with the credit issues

Several actions are being undertaken to minimise the credit issues in the short run and the overall weak financial sector in India. Each pain point as well as the specific measure to address it are highlighted in the table below. 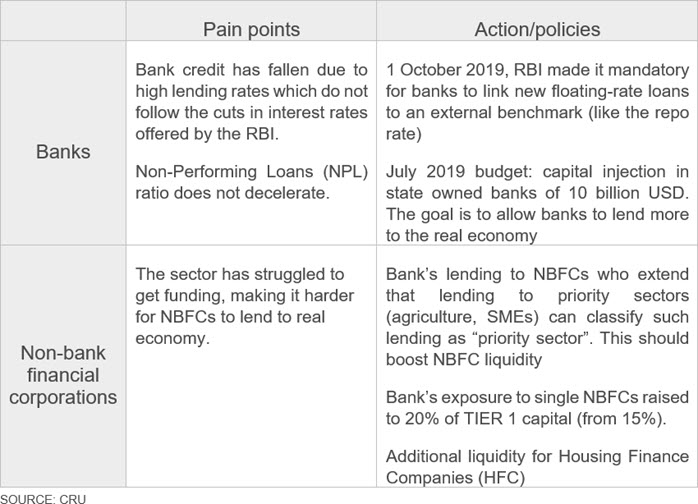 A more protracted growth weakness and a slower recovery could occur for three reasons.

Risks aside, CRU expects Indian growth to average 7% over the next 5 years. For this forecast to come true, we expect the government to take bold policy action that spurs domestic spending, thereby unleashing India’s growth potential in the fast lane.​