From V to U: a US recession would prolong industrial slowdown 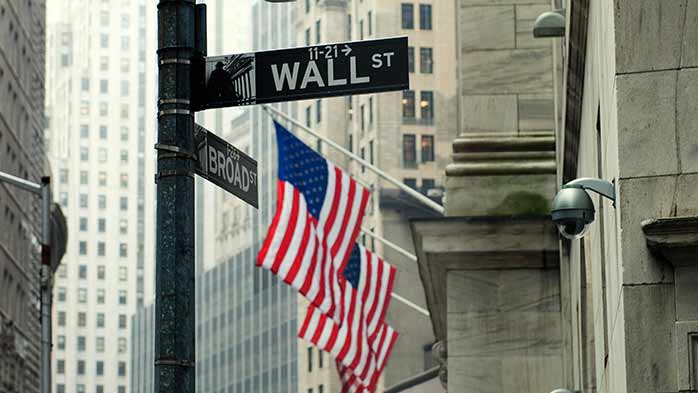 World industrial production growth halved in 2019H1 to 1.5% from 3% in 2018, suffering because of a slowdown in China, the widespread downturn in the automotive sector, and the unpredictable trade negotiations between the US and the rest of the world, particularly China.


In response, metals demand in major economies have contracted. CRU’s base case view is that IP will modestly recover in 2020 (rising to 2% y/y), but the risks to our IP forecast lie to the downside. CRU’s models suggest that the probability of a recession in the US and Germany is at ~40%, the highest it has been since the Global Financial Crisis. Recession in the US would prolong the global industrial slowdown by another 12-18 months making the recovery ‘u’ rather than v-shaped.

Metals demand usually falls during an industrial downturn
In ‘Slowdowns felt more acutely by metals industry’, Global Economic Outlook July 2019, we noted that the industrial sector tends to feel the pain (and gain) of the economic cycle more intensely than other sectors of the economy. When things are good in GDP terms, they are often better in terms of IP. Conversely, when world GDP deteriorates, the downturn in terms of IP is even worse.
Historically, metal consumption is highly correlated with world IP – when world IP falls, so too does metals consumption; although the sensitivity of metals consumption to a given change in IP has varied over time. Between 1960 and 1990 a 1% decline in IP was associated with a 2% fall in metals consumption. However, our analysis suggests the relationship is now less elastic and closer to 1:1. 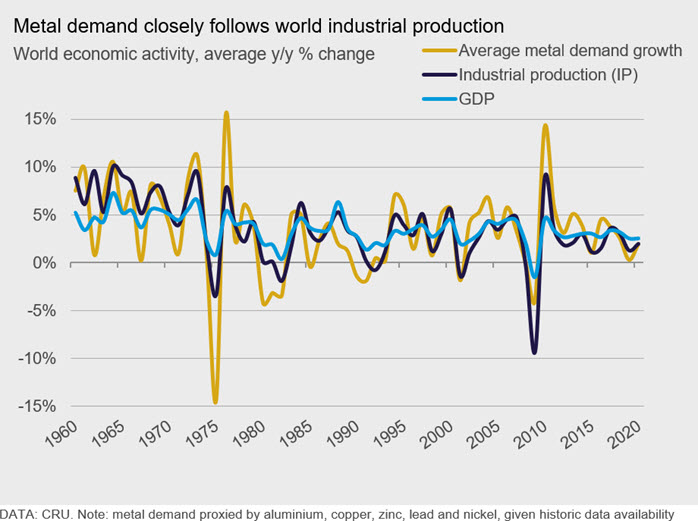 Recession fears are rising in the US and Germany
In Germany, the combination of a global industrial slowdown and challenges in adapting to new emissions standards in the auto industry are weighing on manufacturing sector exports. This has led Germany’s economy to contract in 2019 Q2.

In the US, worries that the longest expansion on record might end soon have been fuelled by slowing momentum in consumer sentiment and a protracted weakness in manufacturing. A US downturn is also a concern because – given it has been the largest economy in the world (since 1871) – the large trade and financial linkages that the US has with other economies have caused a US recession to often lead to a global downturn. “When the US sneezes the rest of the world catches a cold”, as Klemens von Metternich’s said.

Are we ready to call a recession in one the of biggest economies of the world?
Our models assess the probability of a US recession in 2020 at 40%. For over a year now, given the length of the current expansion, media reports have focused on indicators that could signal a recession such as the inversion of the yield curve. CRU has produced a model based on the slope of yield curve, which suggests that the probability of a recession occurring within the next four quarters, 2019 Q4 and 2020 Q3, is approximately 40% - the highest probability since the Global Financial Crisis (GFC). The ‘confidence interval’ around our estimate of 40% tells us that we can be 95% confident that the true probability of recession lies between 27% and 55%. 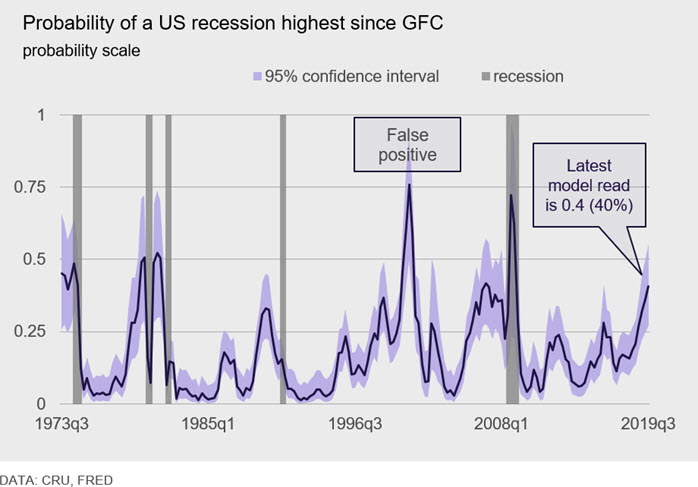 Does this mean a recession is imminent?
A perfectly accurate model would estimate a high probability of recession, just before the outbreak of a recession. That does happen, but not always. Up until the early 1990s, whenever the recession probability spiked above 30%, a recession occurred within the following four quarters. However, that relationship stopped holding as the model began to exhibit false positives – that is when the model produces a relatively high probability of a recession but no recession follows. The most notable example here is in the early-2000s episode. Indeed, some have pointed out that “the inversion of the yield curve has predicted 8 out of the past 5 recessions” (i.e. 3 false positives). 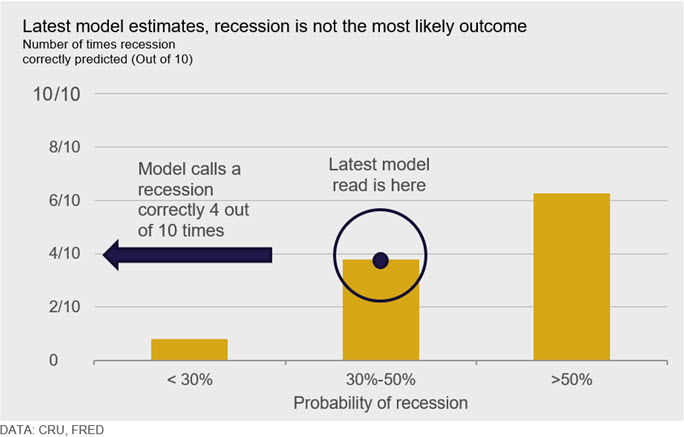 Trigger originates in corporate sector but quickly spreads to consumers
In ‘The sun is setting on the US expansion’, Special Feature, 22 October 2019, we noted that the household sector remains robust but the corporate sector is vulnerable given high levels of debt and stagnant profit growth. Corporate debt vulnerability was highlighted by Fed Chairman Powell in May; pressures on profits arose due to increasing wages and import costs (emanating from a tight labour market and higher trade war related tariffs), and because businesses were unable to pass on those higher costs to consumers in the form of higher prices. Reflecting these strains CEO confidence in Q3 fell to its weakest since 2009. All this means is a small deterioration in the macro/geopolitical picture could intensify the strain on corporates, leading them to sharply pull back on capital outlays and employment, thereby fuelling the downturn. 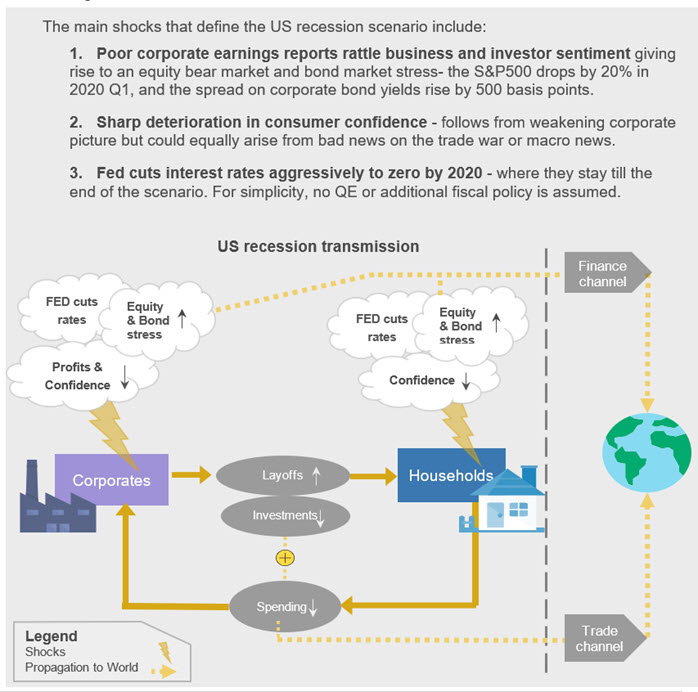 Impact of a US recession on the domestic economy
Negative economic news does not always lead to a recession. It depends on the resilience of an economy. When an economy is vulnerable, negative shocks can lead to negative feedback loops, get amplified and reverberate to other economies through international trade and financial markets.
A scenario where corporate weakness leads to vulnerable companies pulling back on investment and laying off workers would weaken household income, consumer confidence, and lead to falling consumption. In this scenario, the US economy would contract in the first the first three quarters of 2020: US GDP declining in 2020 by 0.2% y/y (compared to rising by 1.6% y/y in our base case), 2% lower than the base case in 2020 and 3% lower by 2021. 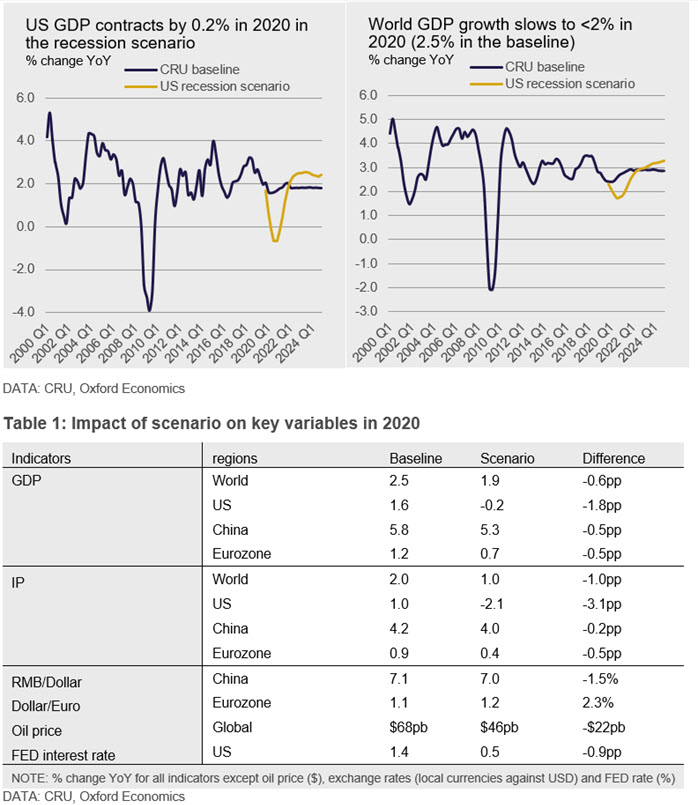 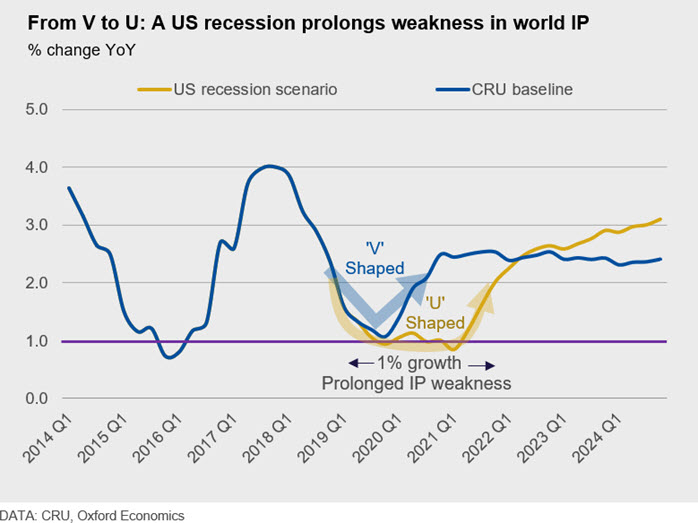 Major economies have more limited policy options to offset an industrial downturn
The IMF October economic update and the ECB September press statement warned that major central banks have less policy firepower now compared to before the GFC, and fiscal policy is also limited in some countries. Interest rates are typically much lower now than pre-GFC, and central bank balance sheets much larger - potentially limiting QE. Prospects for fiscal policy is also limited in economies with high debt levels. US debt-to-GDP ratio is above 100%. In Europe it is lower at 85%; which is why many have called for stimulus, particularly in Germany. CRU’s view is that China is unlikely to undertake GFC style large fiscal stimulus, as it now faces the costs of past stimulus (a build-up of debt and credit risk).

Downside risks to an industrial recovery
Our base case view remains for a mild recovery in IP in 2020, but the risks to this view are weighted to the downside as recession risks in advanced economies – particularly the US –now stand at their highest levels since the GFC. A US recession, should it take place, has the potential to prolong the industrial slowdown by another 12-18 months.

Explore this Topic with CRU
Want to read more? Register to continue reading and gain access to all CRU Insights
Economics
Top