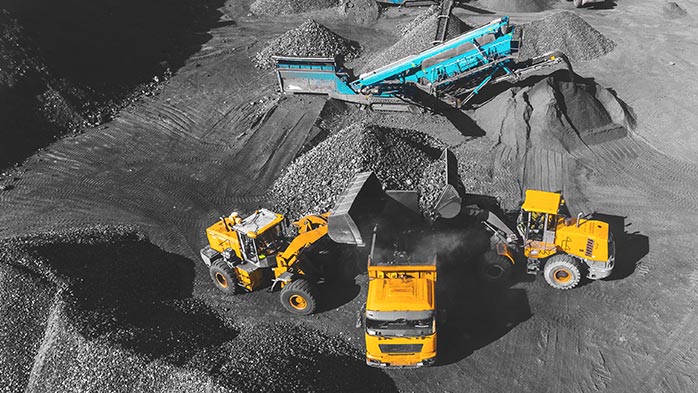 As with any commodity, valuing coal assets can be tricky due to the cyclical nature of the market. In this insight, we discuss how commodity cycles have created ‘winners’ and ‘losers’ in the last few years of M&A activity in the coal sector.


Since commodity prices tend to move in cycles, one of the biggest challenges that industry stakeholders face is determining the ‘fair value’ of assets (which is essentially derived from future cash-flows). In order to do this, we have noticed that the biggest hurdle lies in identifying the current position in the commodity cycle. Moreover, it appears that parties often place too heavy an emphasis on prevailing prices. This has led to companies either significantly under- or over-valuing coal assets in recent years.

Sellers are the industry ‘winners’ of 2018…
Historically, the coal industry has not been renowned for maintaining supply discipline and high margins have usually resulted in a push to ramp up supply, through both brownfield/greenfield expansions and M&A activity. Today, however, environmental concerns mean that new thermal coal investments are largely off the table, although the push towards increased supply in the metallurgical coal sector is still alive and kicking.

The benchmark Premium HCC spot price averaged $206 /t, FOB Australia in 2018, the highest annual average price since 2011, and margins for most seaborne metallurgical coal producers have been very strong. This has encouraged some to look to acquire more volume (e.g. Glencore), while other producers have divested coal assets as part of a strategic repositioning (e.g. Rio Tinto). Other companies that previously produced mostly thermal coal have also acquired metallurgical coal assets (e.g. Adaro). Meanwhile, mid-tier producers, such as Whitehaven Coal, have also acquired new assets as part of their growth strategies.

It is notable that the average value of deals completed in 2018 increased significantly compared with the previous two years. Furthermore, CRU’s modelled NPVs of the assets in question are, by and large, lower than the values implied in the deals that were completed―metallurgical coal prices are considerably above steady-state levels and we believe this is creating this trend.

For example, Rio Tinto sold its 82% interest in the Hail Creek mine last year to Glencore for $1.7 bn, which implies a valuation of $2.1 bn, but our DCF analysis suggests an NPV for the mine of ~$1.6 bn―we believe that Rio Tinto received a good price for this asset, with the timing of the divestment benefiting from the excellent prevailing market conditions.

…but buyers benefit more at downturns in the cycle
By contrast, at low points in the cycle, more assets become available as some producers are forced to offload mines that are losing money and this creates opportunities for others to create value through acquisition. An extreme example of this is the change in ownership of the Isaac Plains coal mine over the years.

In late-2011, at the height of the mining boom, Sumitomo Corporation bought Aquila Resources’ 50% stake in the Isaac Plains mine for A$430 M (the other 50% stake was held by Vale at the time), valuing the asset at A$860 M. Soon after, from mid-2012, prices fell and Sumitomo and Vale shuttered the mine and the investment was seen as just another ‘white elephant’. The mine was eventually sold for a notional A$1 to Stanmore Coal, who’s main obligation was to take responsibility for the A$32 M rehabilitation obligation associated with the mine. As it stands, after a very favourable last couple of years for coal producers, Isaac Plains’ production guidance for FY 2019 is 2.3 Mt and the company puts its full year EBITDA guidance at A$140–155 M. Thus, it could be said that Stanmore Coal has been the beneficiary of, what could be regarded as, one of the most lucrative coal deals in the last few years. This cash generation from Isaac Plains has already caught the attention of investors as Golden Investments made a takeover bid for Stanmore Coal for A$240 M in the last quarter. 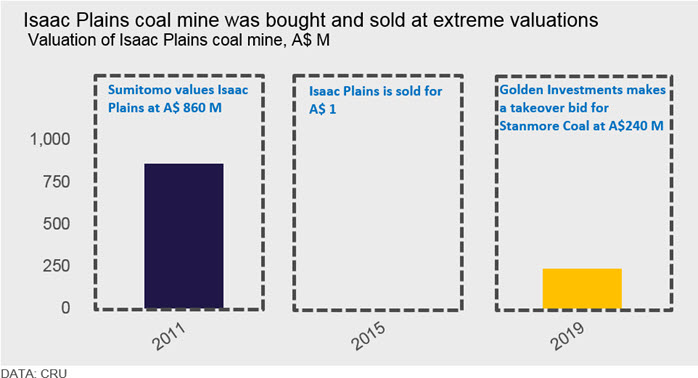 Understanding long-term steady-state prices is essential
Commodity cycles will continue to create ‘winners’ and ‘losers’ in M&A, just as they have done in the past, as companies are forced by predicament to overlook long-term, steady-state prices in an industry. This, in turn, will lead to over- or under-valuations. Coking coal assets are particularly susceptible to this because prices have been very volatile. History demonstrates that chasing volume growth during up cycles tends to lead to lower returns in the long-term. That is, CRU’s analysis of divestments/acquisitions shows that, when assets are sold during a spell when prices are greater than industry marginal costs, value is far more likely to be created for the seller.