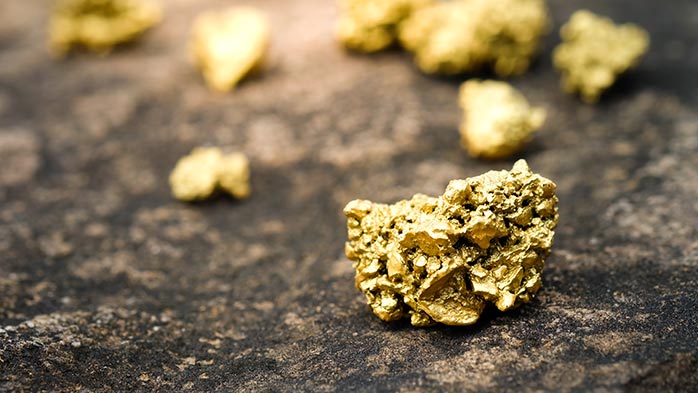 There is increased uncertainty surrounding Italian gold holdings, with the Italian government examining ways it could support its ailing economy.


In this Insight, we review how gold became central to the banking system, review historical actions and agreements between central banks and weigh what Italian gold sales would mean for the market.

Historical context
Gold was at the centre of the banking system, based on fractional reserve banking and banknote issuance, when it emerged in the 17th century. Merchants concerned about the physical safety of their growing wealth began to store their gold with the goldsmiths for a fee. Soon after, gold became a bedrock for a new monetary system known as ‘the gold standard’. By early 20th century, most developed nations linked their currency’s value directly to gold. Central banks were responsible for maintaining that link and managing bullion reserves on behalf of their respective nations.

The outbreak of the World War I marked the beginning of the end of the gold standard, which ceased to exist in 1971, and the era of fiat money began. The unshackled gold price initially rallied through to 1980, but then entered a 20-years long bear market. As a legacy of the gold standard, post-war period and Bretton Woods, a number of Western central banks and the IMF still have substantial holdings of gold as a proportion of their total reserves.

Central bank act to limit sales
Between the late 1980s and 2007, the official sector was an annual net seller of gold. Disposals, largely from European central banks, more than matched reserve additions from developing nations. These heavy sales played a major role in keeping the gold market subdued. In the late 1990’s, the downward pressure on the gold price was so severe that Western central banks debated the idea of the Central Bank Gold Agreement (CBGA) to put a limit on annual gold sales and prevent their own gold holdings from rapid devaluation. The first such agreement was signed in 1999 and covered the five-year period up to 26 September 2004, and limited sales to 400 tonnes in any single year.

The agreement was renewed three more times. Unlike in the previous versions, CBGA-4, covering the period between 2014 and 2019, did not contain a cap on sales. The signatories deemed it unnecessary considering that selling activity dropped dramatically following the credit crunch and financial crisis of 2008, with central banks as a group switching to become net purchasers for the first time in many years. 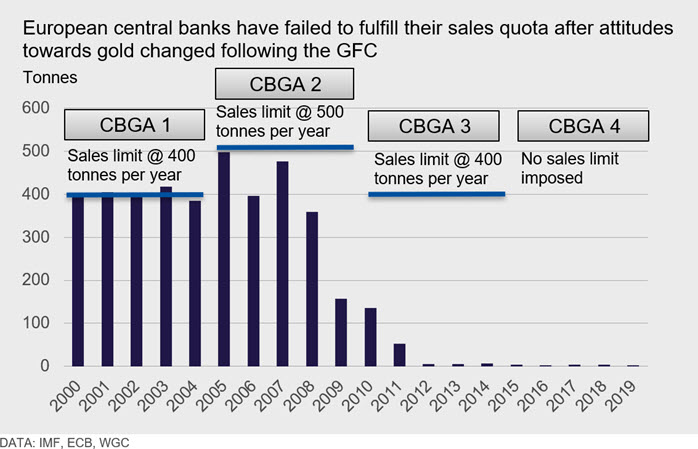 Current situation
On 26 July 2019, two months ahead of the expiration of the current agreement, the ECB announced that it has no intention to renew it. This decision gave out mixed signals. On one hand, the fact that annual gold sales by the signatories over the last ten years were very moderate – they cumulatively sold only 225 tonnes over the period – may suggest that there is, indeed, little practical sense in renewing the agreement.

On the other hand, this decision removes one of the key safeguards that could stop a flood of gold from the banks’ vaults should they wish to break the seal. History demonstrates that official sector activity can be a key variable in driving gold prices both up and down.

The rapidly developing situation around the Bank of Italy and its gold holdings has been a major cause of market discussion since late-2018. This topic resurfaced again at last week’s gold analysts meeting, hosted by the World Gold Council, which we attended. 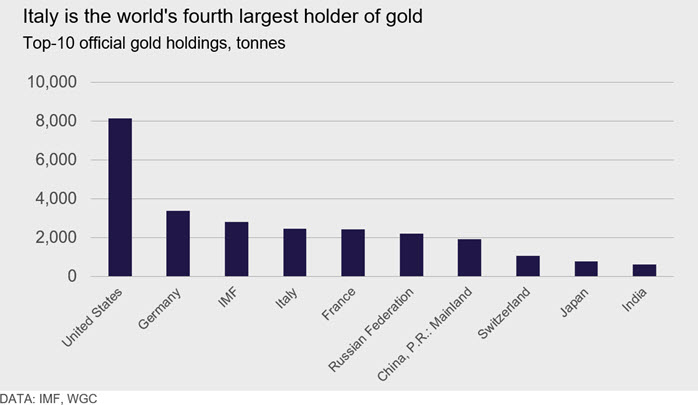 Italian dilemma
Despite its status as the 3rd largest economy in Europe, Italy’s economy has still not made up the ground it lost after the 2008 financial crisis. Its recovery was hindered by many problems including a widening budget deficit, a double-digit unemployment rate and an enormous size of public debt (the third largest in the world). To make things worse, the nation’s economy tipped into recession, albeit technical, at the end of last year after two consecutive quarters of negative growth.

Against this background, the country’s coalition government, the Lega, has been repeatedly clashing with the ECB over the question on gold ownership stored at the Bank of Italy. At nearly 2,500 tonnes, the country’s gold reserves are the fourth largest in the world behind only the US, Germany and the IMF. At current gold prices of $1,435/oz, the value of Italy’s bullion reserves is around $115 billion.

Selling gold would arguably be one of the easiest ways to alleviate the pressure on Italy’s economy; at current spending levels, the reserves could reduce the budget deficit to zero for a couple of years, giving the government some breathing space to find a more effective and long-term solution.

In late-June, the government claimed its first victory after the ECB agreed that the gold reserves belong to the state, and not the bank itself. However, that does not mean a sale of all or part of the gold reserves is imminent. EU treaties do not allow the transfer of gold reserves from the balance sheet of central bank to that of the state. As such, the dispute is far from over as we believe the Italian government will continue to desperately look for a quick way to shore up the ailing national economy.

Potential impact of the speculated sale of Italian gold reserves on market
Although the Italian government still needs to overcome substantial legal challenges before it can start offloading its gold, such a move may have a dramatic impact on the market sentiment, and the price of gold.

Recent history provides a good example of what could happen. In 2013, the news that Cyprus was seriously considering selling 10 tonnes of gold from its 14 tonnes gold reserves to raise cash and provide monetary financing to its government, stoked fears that other debt-laden European nations – including Italy (2,452 tonnes), Portugal (383 tonnes) and Spain (282 tonnes) – could follow suit. Even though the actual sale did not happen, the fact that one of the European central banks was placed under pressure to sell some of its gold holdings sent the gold price tumbling; the price of a troy ounce slumped by 9% shortly after the publication of a draft proposal by Cypriot government.

Italy’s gold reserves are substantially larger than those of Cyprus. Should this nation decide to monetise them, even if only a small part, this would have a ripple effect on the gold market, not only because such a move would push gold prices lower which would in turn diminish the value of the remaining reserves, but also because that would set a precedent for other troubled eurozone countries. With the CBGA no longer in place, there will be one less hurdle before the floodgates can open.