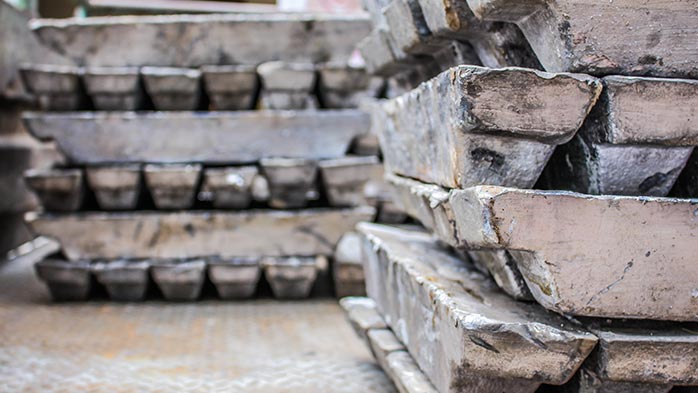 With refined lead production in excess of its consumption and no domestic mine output, the country is also a major player in international lead concentrate and refined lead trade. Furthermore, expansions in the secondary sector have also resulted in buyers competing aggressively for scrap, particularly in the USA but also in Europe and elsewhere in Asia. In this insight we review recent trends in trade of concentrates, refined lead, scrap and also new batteries and the key underlying factors.


Improved concentrates availability drives growth in primary
Concentrates imports into South Korea recovered year on year in 2018, lifting by 12.3% on rising global mine supply, but have slipped back slightly in 2019 due to disruptions at Newmont Goldcorp’s Peñasquito mine in Mexico, an important supplier. The rise in 2018 was driven chiefly by increased production in Australia, although since the final quarter of the year there has also been a rise in availability of US concentrates as some of the material formerly supplied to China has sought an alternative home following the imposition of the 5% duty from September 2018. An analysis of US exports data shows that exports to China dropped sharply in 2018, from 137,000t to 85,000t, with much of the fall occurring in the final quarter. Data for the first half of 2019 also indicate a y/y fall. These concentrates were picked up by South Korea, Canada and Europe. Drilling down into the US exports shows that most of the additional material imported into South Korea in 2018 came from Alaska (Teck’s Red Dog and Hecla’s Greens Creek), while in 2019 additional material has also come from New Orleans (Doe Run’s SE Missouri mines). 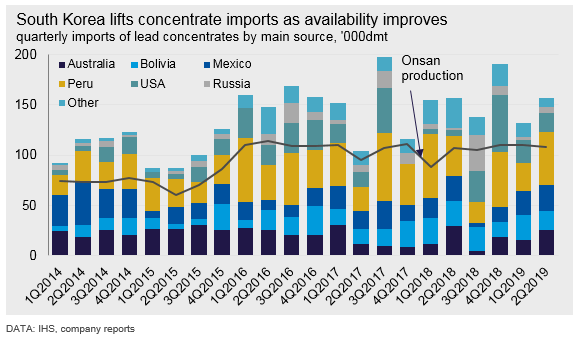 Improved concentrate availability has enabled Korea Zinc to lift primary lead output, which we estimate was up by 12% in 2018, although this was offset by lower throughput of secondary materials, and total refined lead production was actually down by 3.1% from the previous year. However, it should also be noted that extended maintenance was undertaken during the first quarter. Output has tracked higher in 2019, reaching its third highest on record in 1Q2019 and exceeding 110,000t only for the third time ever.

Higher primary output at Onsan over the last eighteen months reflects not only the increased availability of concentrates, but also a reduction in availability of the silver/lead residues from Nyrstar’s Budel smelter, more of which are being sent to Nyrstar’s Port Pirie smelter with the ramp up of the TSL. These residues are favoured by Korea Zinc over other secondary materials because of the high silver content. Meanwhile, we estimate that secondary production at other plants in South Korea is on the rise, resulting in overall growth in secondary production and total refined lead output. CRU is forecasting a rise in South Korean refined production of 1% in 2019 to 774,000t, with total secondary up by 3%. 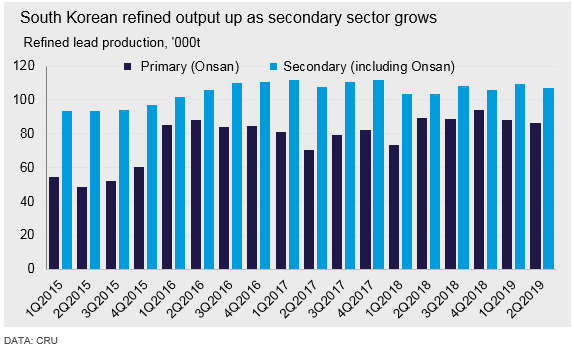 The pattern of exports has also changed, with a slight shift away from the USA and towards other Asian countries. In 2018, a tight metal market in China and an open SHFE/LME arb drew metal into China, with a corresponding fall in exports to the USA and a slight drop in shipments to India. This year has seen a further rise in exports to China and a recovery in exports to India, while those to the USA have continued to fall. Exports to the USA during the first six months of this year totalled 38,000t, down from the 49,000t exported a year ago. It is worth noting here that all of the exports to China have been of primary lead from Korea Zinc’s Onsan smelter. This is one of the few grades of lead that are acceptable to Chinese battery makers. 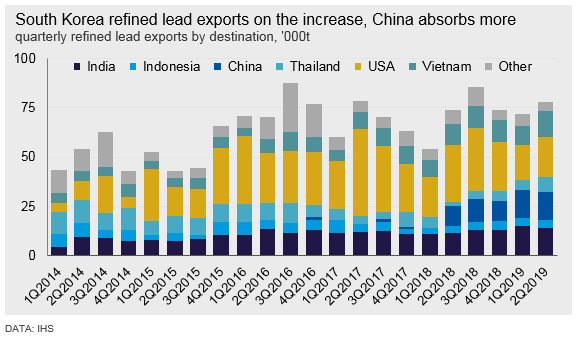 South Koreans compete aggressively for scrap
Increased secondary output clearly requires more scrap, and with the availability of domestic battery scrap relatively stable, South Korean secondaries have been looking abroad for the additional tonnages. Furthermore, they have seen a drop in the availability of scrap batteries from Japan due to restrictions imposed by Japanese authorities on the shipment of scrap to smelters that process the scrap in a way deemed to be unacceptable from an environmental standpoint. As a result, we keep hearing that traders sourcing scrap for South Korean smelters have been competing aggressively in North America, and to a lesser extent, in Europe. 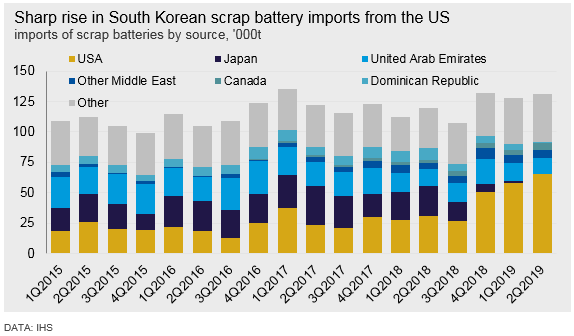 It is difficult to get comprehensive and reliable data on trade in lead scrap. We have analysed the data for South Korea under the harmonised codes classification 854810 (Waste and Scrap of Primary Cells, Primary Batteries and Electric Storage Batteries; Spent Primary Cells, Spent Primary and Electric Storage Batteries), which may also include some non lead- based batteries. However, the bulk of the trade will be in lead-based batteries, and so the data does provide a good indication of the trends in the trade. Three clear trends can be seen from the data in the chart below: the rise in overall imports, the drop in imports from Japan and the sharp rise in shipments from the USA. For many years, the top three suppliers of scrap batteries to South Korea have been Japan, the USA and the United Arab Emirates (UAE). However, from an annual level of around 90-100,000t/y, imports from Japan dropped sharply in the final quarter of 2018 to almost zero in 2019, leaving the South Korean secondary producers short of material. Imports from the UAE, a regional scrap hub for the Middle East, have also fallen sharply this year. Imports from the USA have risen significantly, more than doubling in the first six months of the year compared to a year ago.

One final topic to consider is the trade in new automotive and industrial lead-based batteries. The slowdown in new vehicle sales and the maturing of the domestic vehicle population has had implications for the domestic automotive battery market, which has also slowed. South Korean battery manufacturers are looking to export more units while imports have also fallen, and total net exports of automotive batteries have risen by 6.5% y/y in the first six months of the year, to 20.9M units. Shipments are up to Australia, other Asian, South American and African countries. 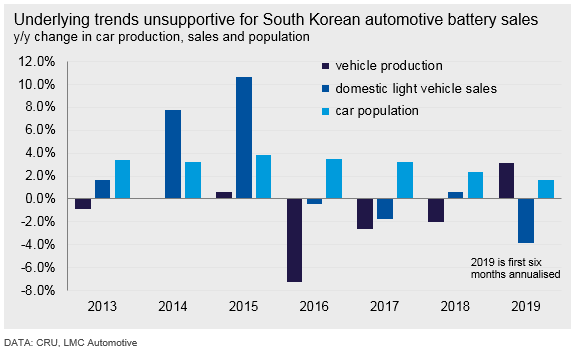