The twilight of British Steel? 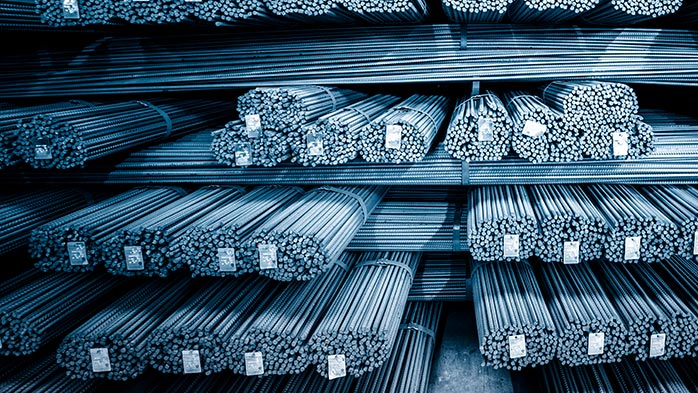 The UK steel industry has taken a blow this week, as the high court has placed British Steel into compulsory liquidation.


Around 5,000 company employees have been left with an uncertain future, and the prospects for the European steel long product markets are similarly unclear. In this Insight we will present the factors that led to this development, as well as the implications of possible outcomes.

British Steel suffers under market conditions
The long products arm of Tata Steel Europe was initially acquired by Greybull Capital in 2016 for a token £1. After an initial period of profitability the firm has apparently become more challenged. Several factors have contributed to this:

Carbon costs
One factor resulting from the failure to agree on a Brexit deal has been that the EU has not allocated free CO2 emission permits to UK companies in 2019. These would become forthcoming if a deal were agreed. British Steel earlier sold its credits, with the intention of buying them back when necessary and at lower prices.

The company was thus left without enough credits to cover its emissions and without the capital required to purchase more, especially considering the large rise in carbon credit prices this year. The UK government recently provided a loan of £120m to cover these purchases – sending the company further into debt.

Exports and weaker orderbooks from market downturn
The uncertainty around Brexit has heavily affected continental EU demand for UK steel. Not knowing how the UK leaving the EU would affect the logistics of steel shipments, EU consumers have preferred to buy elsewhere when possible. As British Steel is highly exposed to the export market, this has weighed substantially on demand for its products. Prices were cut to drive sales, though of course this margin reduction causes longer-term problems.

Compounding this, slowing demand in the EU markets will have decreased buyer interest further. Both automotive and construction demand have been sluggish over the last few months, and this has been enough to pull European prices down despite the protectionist measures in place on imports.

Other
In the UK the claimed high cost of business rates, energy and wages is regularly cited in the media, though form relatively minor parts of the overall steelmaking cost base. FX rate movements are also often cited as a challenge, though these have both positive and negative effects. Taken alone these would represent relatively minor obstacles to be overcome, but as part of the greater picture they lessen the opportunities for recovery.

Closure
If a buyer cannot be found the company will need to close. This is a real possibility, both because the asset is clearly high-risk and because there is recent precedent. SSI closed at Teesside in 2015.

British Steel is an important European supplier of rails and high carbon wire rod but less so for structurals.

While low carbon wire rod is used in construction, the higher value and more technically sophisticated high carbon wire rod is primarily for engineering applications like car manufacturing. Therefore, the prospect of taking such a prominent high carbon wire rod producer out of the market could lead to supply disruptions and potentially a tighter market for these products. However, given the currently weaker demand from the automotive sector and the engineering sector in general, potential market tightness is less likely in the short term.

British Steel is a key rail supplier with nearly 20% of European installed capacity. As well as fulfilling almost all UK domestic requirement British Steel also exports, mainly to Europe with Germany being the largest customer, but also further afield to the USA and Asia. Rail is also produced at Hayange in France. 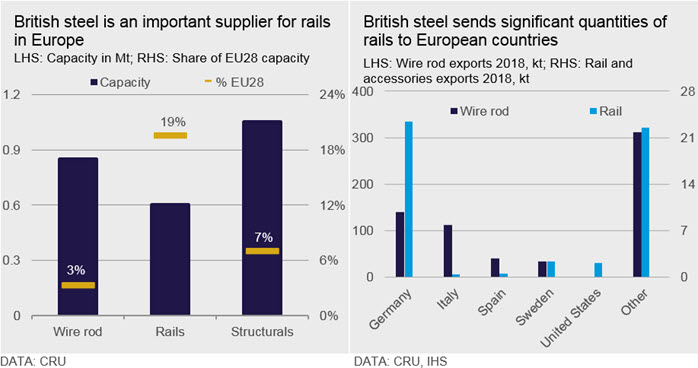 Sale
The integrated Scunthorpe plant represents most of the asset base of the company, in addition to subsidiary longs rolling assets in Teesside, France, and the Netherlands plus R&D and service centre assets. British Steel has also recently agreed to purchase the Ascoval steel plant in northern France, and this purchase will reportedly not be affected directly by the liquidation. It is therefore not clear whether this asset could be resold to make money back for the parent company.

As the primary asset, Scunthorpe will probably attract the most attention. The site could be sold as a single package, but the option exists to parcel it off into smaller parts instead. The precedent does exist; what is now known as Liberty Merchant Bar was previously Caparo – and before this part of Scunthorpe itself.

Any purchaser of the firm might want further incentives from the UK government, though these may not be forthcoming. While the government agreed to the commercial bridging loan to cover the shortfall on carbon credits, it has been unwilling to offer further financial assistance on any terms that would be considered illegal state aid. This means that any buyer may not count on this support should it be desired.

Liberty House would probably be high on the shortlist of anyone speculating about future owners. Other companies with an existing presence in some of British Steel’s niche businesses such as HC wire rod or rail might consider carving out those parts.

If Scunthorpe were to continue operating under new ownership it is possible that a different production model might apply. Currently it is a BF/BOF-based plant, which allows a high quality of liquid steel output. However, it is scaled for much larger volume operation than has been reality in recent years. The cost of carbon-intensive steelmaking is rising, as is public concern over emissions. There seems a potential business case for a different heavy end configuration, maybe based on EAF, though big questions over how to pay for any such transition.

Nationalisation
The nationalisation of the company would follow a long tradition of steel companies named “British Steel” being nationalised within the UK. The namesake of the company was nationalised and then privatised twice in the 20th century. While the government is unlikely to want to prop up the producer using tax revenues permanently, this could be done as a short-term measure as it was in the case of Ilva. Given that up to 20,000 jobs would reportedly be affected by the company shutting down through the supply chain, the government may prefer to keep the company afloat until a buyer can be found rather than allow for it to close.