Trump takes next battle in trade war to auto sector 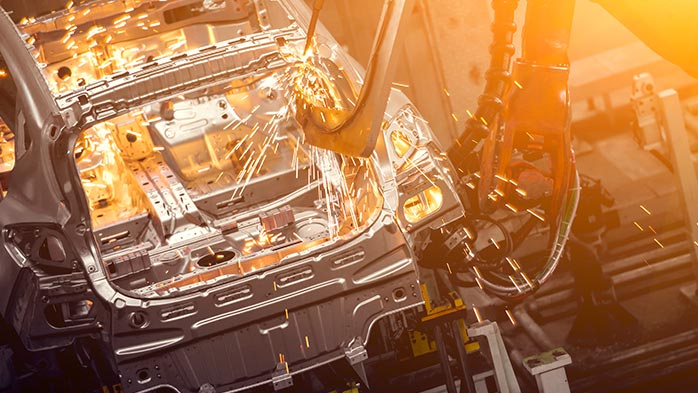 Trade wars pose a serious threat to the global economic outlook. We expect large car tariffs to hurt US consumers, reduce imports, and disrupt global car production and suppliers to the auto industry.


The countries most exposed to these tariffs include Mexico and Canada followed by Germany, Japan and South Korea. On 17 May a White House statement confirmed our expectation that the President is very likely to  impose higher tariffs on imports of cars and car parts at some point over the next twelve months.

In the first quarter of 2018, the US imposed tariffs on all imports of aluminium and steel. In the summer, a trade war between the US and China broke out and has since escalated. It is now confirmed that the US will impose higher tariffs on cars and car parts; details will unfold over the next six months. This Insight presents a framework we use to assess how car tariffs are likely to propagate through the US car industry.

The Section 232 auto investigation report concluded that automotive research and development is critical to US national security. It confirmed that foreign-owned car producers have a competitive edge over American-owned producers. The report concluded that to improve domestic competitiveness, imports of US cars and car parts must be reduced. The President has directed the US Trade Representative to negotiate agreements with trade partners, singling out the European Union, Japan suggesting that exemptions may be available for Canada, Mexico and South Korea.

The US relies heavily on imports to meet car demand
There has been a sizeable long-standing gap between the number of cars sold in the US and the number of domestically produced cars. This gap is filled by imported foreign cars and is a reflection of the fact that US car manufacturers cannot make cars profitably enough in the US to meet local consumer demand, which is why some US carmakers have moved production to Mexico. Apart from this, some US consumers simply prefer foreign car brands. In 2018, car sales stood at 17.2 million units, relative to domestic production of 11.8 million units. Given that some US produced cars are exported, we estimate that the US imported 6.4 million units of cars in 2018. 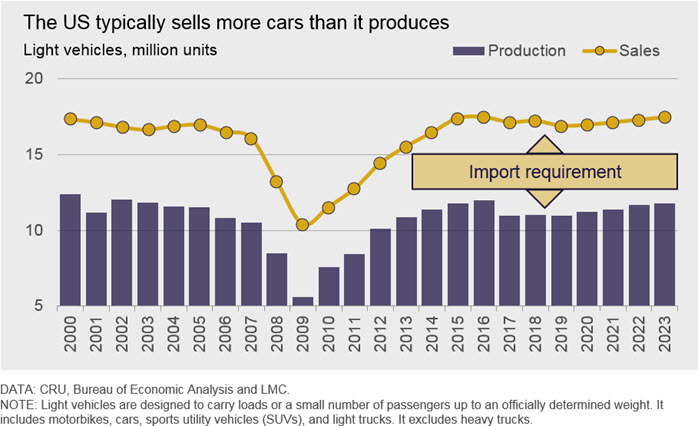 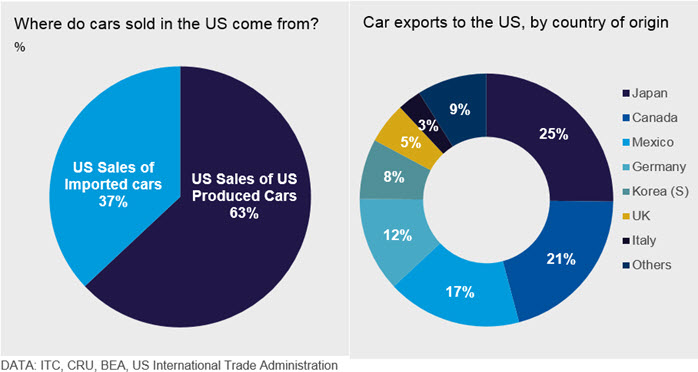 In 2018, the US spent $306bn importing cars and car parts and earned just $130bn from car exports. Car parts accounted for around one third of the import value. With the car industry importing around $300bn of cars and car parts, the exposure of this industry to potential tariffs is on par with the tariffs already applied by the US on China. 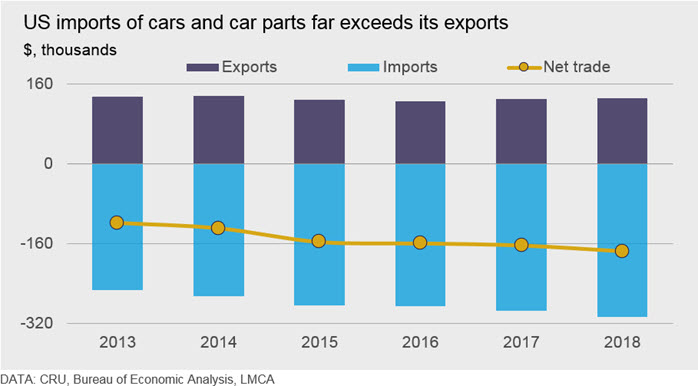 US car tariffs strike at the heart of EU and Asian economies
The US primarily imports smaller cars. In CRU’s June 2018 Industrial and Economic Outlook report, our Special Feature “Trumps vehicle tariffs take aim at the heart of the metals sector” set out that seven countries account for 90% of all car imports: Japan, Canada, Mexico, Germany, South Korea, UK and Italy. After that, Sweden, Finland and Slovakia make up another 4% - 5%. Canada and Mexico together account for nearly 38% of US imports, so an exemption for these countries will reduce the exposure and disruption significantly.

Car exports are an important part of the economies of Mexico, Canada and Germany. Canadian car exports represent about 1% of GDP, similar to that of Germany. Mexico’s vehicle output exported to the US accounts for 2% of Mexican GDP.

To help assess the impact of tariffs, we use a three-factor framework to assess how tariffs are likely to propagate through the US car industry.

Trade policy
The first consideration is the rate at which car tariffs might rise. It could be anything between 0% and 25%. In addition, tariff rates could be set on different terms with different countries. Close trading partners, such as Mexico and Canada, who are part of the new USMCA, could negotiate an exemption. This would reduce potential disruption as it would leave the cross-border supply chains in North America intact.

Tariff transmission on the US car market

Producer pricing response
Higher tariffs mean that foreign producers who export cars to the US will face higher costs in the form of taxes payable to the US government. These producers will need to decide how much of the tariff to pass on in the form of higher prices and how much to absorb in their profit margins. Tariff pass-through could be anywhere between 0% to 100%. In the long run tariff pass-through is full translating to a 25% higher price for consumers. Manufacturers who import several car models are likely to spread price rises across different car models—the prices of luxury cars may take a greater share than smaller cars, reflecting the price sensitivity of different buyers.

Consumer demand response
Faced with higher car prices, on average, US consumers will demand fewer imports. The reduction in imports will be determined by consumers’ sensitivity to price (or the “price elasticity of demand”). While that is the average response, it will be made up of individual decisions. For example, some consumers will continue to buy imports at the higher price, others will switch away from imports to domestic cars, while a final group will postpone car purchase to a later date. The individual decisions will be based on personal circumstances and their preferences for car make and model. The fall in demand for imports, in response to higher prices, tends to be smaller for luxury brands and large cars, but lower for smaller cars.

The switching of demand, from foreign cars to domestic cars, will push up the demand for domestic cars. If that increased demand cannot be met by current US production capacity, prices of US cars will likely rise. In 2019 Q1, the car industry was operating at 77% capacity, against a historic high of 95%, so there is some scope to raise domestic production.

Average car prices in the US will rise, because the price of both imported and domestically assembled cars will rise. The composition of the car market, and global supply chains is likely to change. If Mexico and Canada are exempt, we could see a diversion of bilateral car trade flows – away from Germany and Japan and towards Mexico and Canada.

Impact of tariff hike on US imports
How different tariff rates, price pass-through and consumer price elasticity of demand affect the demand for car imports is shown in the chart below. The three scenarios assume tariff rates of 10%, 20% and 25% tariff cases and under each tariff case the bars show different assumptions of the elasticity of demand between 0.5 to 3, which are sourced for the literature. 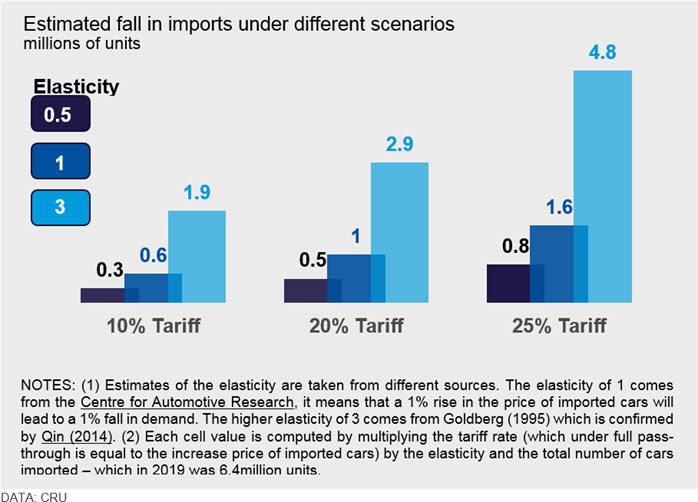 The impact of car tariffs on total US imports varies depending on the assumption made. A 10% tariff rise could lower imports by between 0.3 to 1.9 million units (or 2% - 14% of total car sales). Higher tariffs will lead to a larger fall in imports, as a larger fraction of consumers will be more likely to hit their affordability constraints. The above table provides no tariff exemption for Mexico and Canada, if there were exemptions the impact on reduced imports would be around 30% less.

Car tariff uncertainty will linger
The White House has  responded to the Section 232 auto investigation report on 17 May. We interpret this statement as  confirmation that higher tariffs of some form, and on some countries will be imposed on imported cars and car parts. US trade negotiators have 180 days to act, which takes us to 14 November 2019 and the run up to the US presidential elections in 2020. Car tariffs risk disrupting the US car industry and global car production. The extent of the disruption will depend on the size of the tariffs imposed, as well as how car producers and consumers respond.