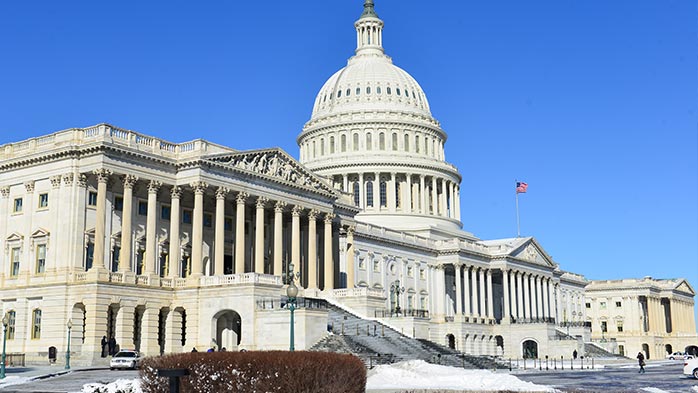 The partial US government shutdown which began on 22 December 2018 lasted 35 days and is the longest shutdown in US history. President Trump decided to re-open the government until 15 February to allow time for additional negotiations regarding the border security issues.

The Congressional Budget Office estimates that the recent shutdown will ultimately cost $3 billion as a direct result of the lack of provision of government services. Indirect effects are difficult to quantify and could be larger.


Why was there a US government shut down?

The partial US government shutdown was the 21st in US history and the longest running at 35 days. Shutdowns began in 1976 but the withholding of money for government services (the “funding gap”) did not emerge until the seventh shutdown in 1981. Up until the 21-day shutdown that took place in 1995/1996 (the second longest on record), government shutdowns typically lasted between two and four days.

The federal budget for FY 2019, which began on 1 October 2018, has already been agreed. However, Congress is required to pass “appropriations bills” designating how the funds will be divided among the various government agencies.

The most recent shutdown arose because the President and the Democrat-controlled House of Representatives could not agree on how to allocate the final 25% of the federal budget. President Trump vowed to veto any bill which did not provide money for “the wall” between the US and Mexico, which he believes is necessary to discourage illegal immigration. The Democrats oppose “the wall” and refused to draft a funding bill which includes this.

As a result of the shutdown, around 420,000 federal employees worked without pay (e.g. airport security, border agents, etc.) and another 380,000 were furloughed without pay (they kept their jobs, did not report to work and were not paid).

On 26 January, President Trump announced the federal government would re-open until 15th February, leaving about three weeks for a new deal to be agreed.

One silver lining in the shutdown is that there is now broad, bipartisan support to change the appropriations process so that the federal government keeps running at its current spending level until a final funding allocation is agreed (i.e. the “funding gap’ would be eliminated).

How did the shutdown affect the US economy?

The Congressional Budget Office (CBO) estimates that the direct losses from the shutdown will amount to around $3 billion, which equates to 0.02% of GDP – an extremely small amount. The reason the effect is so small is that, eventually, whatever expenditures that were not disbursed during the shutdown will need to be paid once the shutdown is over.

Since there is a possibility that another shutdown will occur, it is worth explaining how the effects of the shutdown are measured. The amount of funding in question, for a full year, amounts to $240 billion, which represents about 1.3% of 2018 GDP. Thus, for each calendar month that the shutdown lasts, we estimate that the direct effect from the shutdown will reduce US GDP by around 0.1%.

The indirect effects on growth are much harder to measure and the estimates vary widely. We have seen a figure quoting a loss of 0.2% of GDP for every calendar month the government is not running. That is about twice the “direct” effect we have estimated.

How did the shutdown affect policymaking?

Monetary policy
US Fed policy has been under close watch in recent months amid growing concerns about the health of both the US and global economies in 2019. In its policy statements, the Fed has said 2019 policy decisions will be “data dependent”. Although it also noted a reliance on incoming data during 2018, last year it was relatively clear that the Fed was primarily pursuing a course of policy normalisation, which occurred during a time of strong US economic growth.

Because of the shutdown, the Fed did not receive the full complement of data indicators normally available for its upcoming meeting on 29-30 January. In particular, the national accounts dataset was not produced, which is important because it includes data on consumer spending and investment outlays, as well as the Fed’s preferred measure of inflation, the PCE deflator. In addition, regular monthly data on housing starts, non-residential construction spending, orders/shipments and international trade were not released during the shutdown since the Department of Commerce was not operating.

However, the Fed was able to receive both labour market data and alternative inflation data produced by the Bureau of Labour Statistics, which is fully funded this fiscal year.

Based on its recent communications, we did not expect the Fed to take any action on interest raise rates after its January meeting. The shutdown reinforces our view on that front.

Trade Policy
Since the US Department of Commerce was not funded and its staff were not working, progress on the Section 232 investigation on vehicle imports was delayed and the processing of exclusions from the other tariffs already imposed by the Trump administration was on hold.

No money, no services

The bottom line is that, unless the appropriations process is changed to avoid this funding gap in the future, Congress and the President need to come to an agreement over the allocation of this last $240 billion in funds by 15 February. If that deal is not done, the government will shut down once again. Since President Trump made the first move in re-opening the government, it is likely that he will expect some concessions on border security, and perhaps “the wall”, from Congress in this next round of negotiations.

Estimates suggest that the cost of the recent shutdown, in terms of GDP lost, are not significant. What is more worrying is that key agencies of the federal government were not generating crucial economic data. This may have affected Fed policymaking and delayed decisions regarding tariffs. Moreover, US companies also lacked information needed to implement their investment and employment decisions.