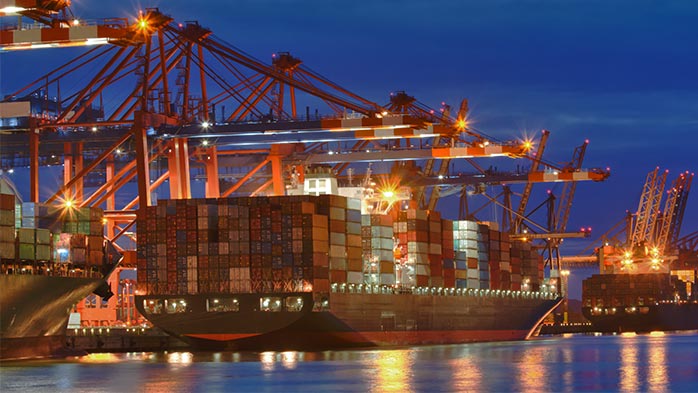 In response to events in Syria, US President Donald Trump has announced that the US tariffs on Turkish steel imports will be restored to 50%, after they had been revised down to 25% in May. What are the likely impacts of this decision?


Turkish exports remained subdued despite tariff rollback
In August 2018, the US President uniquely increased the Section 232 steel tariffs on Turkey from 25% to 50%. When placed on uneven footing with other international sellers, Turkish mills were uncompetitive in the US, and total monthly US steel imports from the country dropped almost 80% between the periods March 2018–August 2018 and August 2018–May 2019.

Despite this tariff being reverted to 25% in May, Turkish export activity to the US has not recovered since: 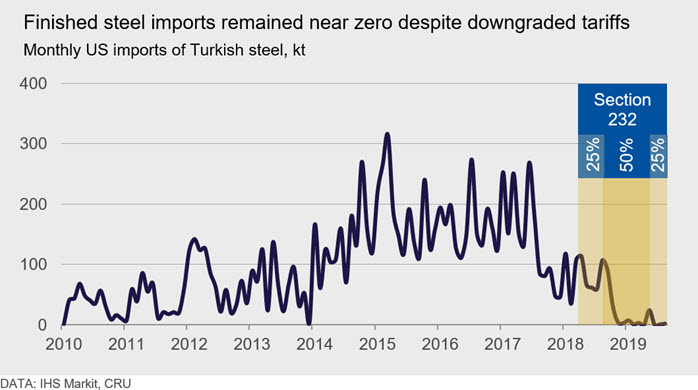 This lack of recovery is because the key factor in the competitiveness of Turkish steel has been its scrap costs. In September, the Turkish scrap price reached levels that would allow for rebar to be offered at prices both attractive to US buyers and profitable for Turkish sellers – though US consumers largely steered clear from Turkish material as they were concerned about possible US-Turkey trade actions – concerns now shown to be well-grounded.

Look beyond the headlines – the tariffs are not the story
As monthly Turkish exports to the US have remained near zero for the last year, this reversion to a 50% tariff will only perpetuate the absence of Turkish mills from the US market rather than cause any noticeable changes. It does, however, quash any opportunities that may have been afforded to Turkish exporters as a result of the recent falls in scrap prices.

While at first glance the increase in tariffs appears to be the most significant outcome of this newest round of sanctions for steel, it is probably the broader measures which will end up having the greatest impact. Turkey’s economy is currently going through a tentative recovery, and while we are sceptical of the recently announced official target of 5% GDP growth for 2020, we previously expected that the economy will see growth next year. These sanctions, and any governmental or corporate action which may follow, threatens to undermine this. Volkswagen has already announced it will be delaying its decision regarding a new plant in the country, and the US will be applying secondary sanctions on financial institutions that conduct transactions with sanctioned individuals and ministries. It remains to be seen whether the EU will take correspondingly firm action against Turkey but in the light of Turkey’s leverage in helping stem migration flows to Europe it is perhaps unlikely. Nevertheless, the geopolitical risk of buying steel from Turkey has certainly risen.

Turkish mills have recently preferred to cut semi-finished steel imports to sustain steel output as best possible – semis demand is down 21% y/y for 2019 to August, while production is down 10% y/y over the same period. Semis imports may not be cut further, so in the absence of an export offset, steel output would need to drop further. In the near-term Turkish mills may feel they have to drop prices to secure any orders they can.

Additionally, there is talk that a bottom has been reached for the US scrap market, though it depends on how the steel market there performs. We previously expected slightly weaker Turkish scrap import prices over the short term, but the latest developments have presented an additional downside risk. Weak steel and scrap markets in Europe – especially in the southern markets – and in the US will not provide much resistance to lower Turkish scrap bids. However, any price falls will probably be limited because scrap prices in the US and parts of Europe are near the level where supply has historically dried up quickly – indicating that the floor is near.