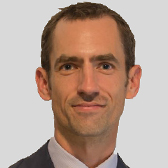 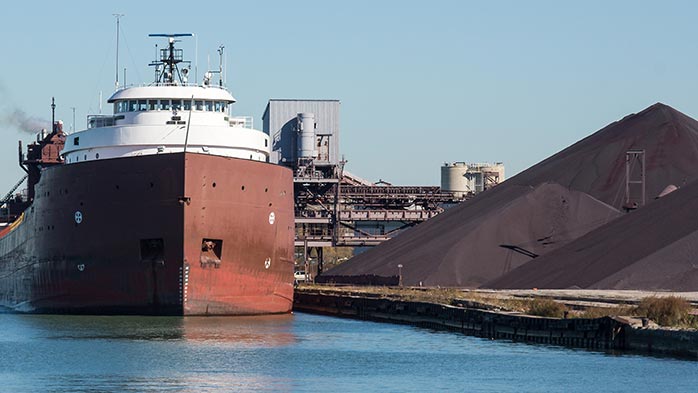 On 25 January 2019 it happened again. Just three years and two months after Samarco’s tailings dam failed, the world’s largest iron ore producer, Vale, saw one of its tailings dams collapse in Brazil. Administrative buildings and infrastructure were destroyed as 11.7 million m3 of mining waste from ore processing, also known as tailings, flooded the site. The death toll is expected to exceed 300, mostly Vale’s own employees. There are currently 165 people confirmed dead and a further 160 reported as missing.


CRU has closely monitored the situation and our analysis shows that the dam breach will have an immediate impact on iron ore supply, prices, quality and pellet premia. In the aftermath of the event, we expect the breach to have a major impact on the use of tailings dams in Brazil, with tighter restrictions on wet beneficiation and prolonged licensing processes as a result. In the medium and long term, we are expecting Brazilian iron ore to deteriorate in quality and production costs to increase, thus making the country less competitive in the global iron ore market. While this will result in higher margins for the other major iron ore producers in the near term, a supply response is expected to come from high-cost mines in China as well as new projects that can be brought online in the next few years. The shipping industry has been hit hard by the dam breach as iron ore transported from Brazil to Northeast Asia was becoming an increasingly important route for Capesize vessels. Freight rates from Brazil to China have fallen by 20% since mid-January.

Understanding Brazilian iron ore production
Brazil is the world’s second largest iron ore producing country behind Australia. ~70% of exports go to East Asia and ~15% of exports to Europe. Brazil’s iron ore is some of the highest quality to be found in the world. In 2018, the average Fe content of Brazilian iron ore exports was 64.5%. In comparison, the same figure for Australia was 59.5%.

A significant proportion of Brazil’s iron ore does not require much processing, especially in the Para state, home to Vale’s Northern System. However, most of the country’s iron ore is produced in the Minas Gerais, a state dominated by a type of ore called Itabirite that has an Fe content between 30–58%. Therefore, wet beneficiation processes are often used to get rid of waste rock and to raise the iron content to levels above 60%. Wet beneficiation, however, generates large volumes of tailings that typically have been stored in tailings dams.

Vale accounts for close to 90% of the country’s iron ore production. Around half of the production takes place in the Northern system where less wet beneficiation takes place and the company is currently ramping up production there at the new S11D mine. Vale is also the world’s largest pellet producer and most of the pellet feed production and pellet plants are located in or around Minas Gerais. 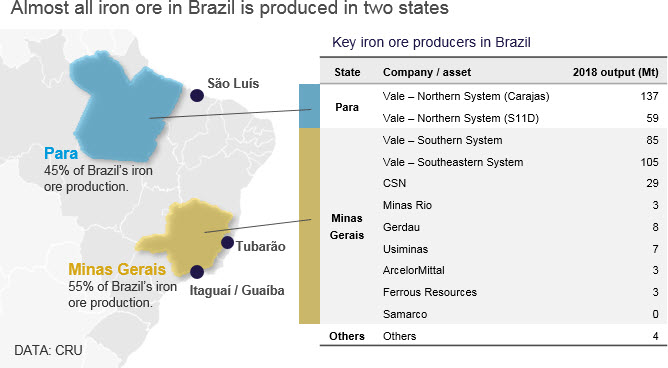 The Brumadinho dam breach – what happened?
Vale’s dam breach occurred near its Feijão mine in the company’s Southern System (SS). The tailings flooded the infrastructure used by both the Feijão and Jangada mine before destroying a canteen, where employees were having lunch, and administrative buildings. As the tailings flowed down the valley, two smaller dams, B4 and B4A were also breached and the railway bridge connecting the complex to the main rail line that brings the ore to the ports was washed away. 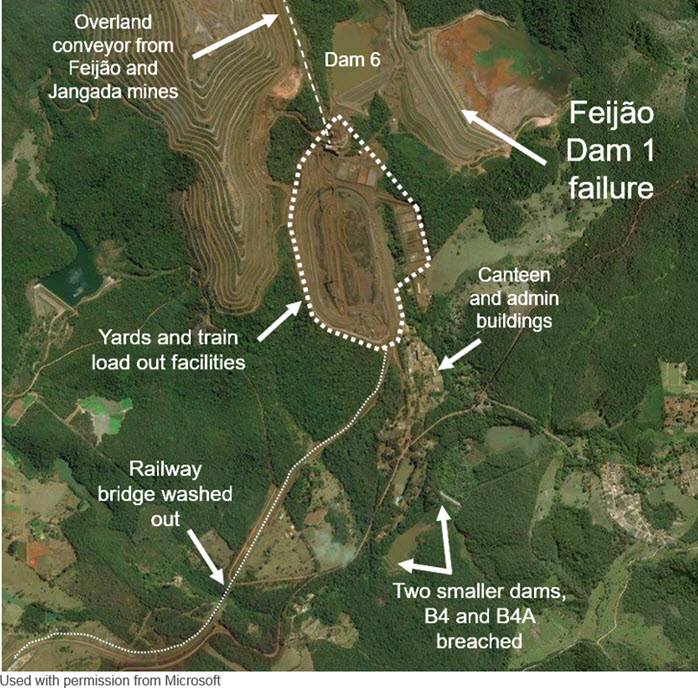 Upstream dams under review
The dam wall that contains the tailings can be constructed by different methods. Three of the most common designs are upstream, downstream and centreline, which describe the positioning of subsequent berms that are built to increase dam capacity. The upstream design is cheaper, but its stability is reliant on consolidated tailings supporting the berms. Because of this, the dam wall integrity can be affected by seismic movements, which contributed to the breaches of upstream dams in Chile in the 1960s and to the Samarco accident in 2015. The downstream and centre line construction methods are more expensive and generally use more construction material but they are not as reliant on tailings stability and provide greater dam capacity.

70 Mt/y of production suspended… for now
Vale has announced that nine sites have been idled in the SS, which will impact 40 Mt/y of output. Of this, 11 Mt/y is pellet produced at the Vargem Grande and Fábrica pellet plants. Vale has also confirmed that the entire Vargem Grande complex has been idled for the duration of dam decommissioning. This is not surprising, given the main conveyor line between the Vargem Grande processing facilities and the train loading facility runs along the dam wall of ‘Barragem Vargem Grande’, an upstream tailings dam of a similar size to Feijão Dam 1.

On 4 February, the state court in Minas Gerais ordered the suspension of operations at eight tailings dams, which has forced the idling of the Brucutu mine and beneficiation plant in Vale’s Southeastern System (SES). This triggered Vale to declare Force Majeure on some iron ore and pellet contracts. Subsequently, the State Secretary for Environment and Sustainable Development (SEMAD) has also cancelled the operating licence for the Laranjeiras tailings dam at the Brucutu complex and the tailings dam at Jangada mine, which was one of the other SS sites already idled by Vale.

In total, 70 Mt/y of production has been suspended to date. While we expect the 40 Mt/y loss in SS to remain for a considerable amount of time, the recent 30 Mt/y suspension in SES has some chance of returning to production at an earlier stage if Vale can reverse the court rulings.

On the day of the accident, the benchmark 62% Fe price was $74 /t. Since then, prices have jumped to over $90 /t and similar price moves have been observed for both the 65% and 58% indexes. Another effect of the accident is collapsing freight rates. Iron ore is a key commodity in the global dry bulk shipping market and an expected loss of trade on a key route like Brazil to China has resulted in freight rates falling by 20% since mid-January. 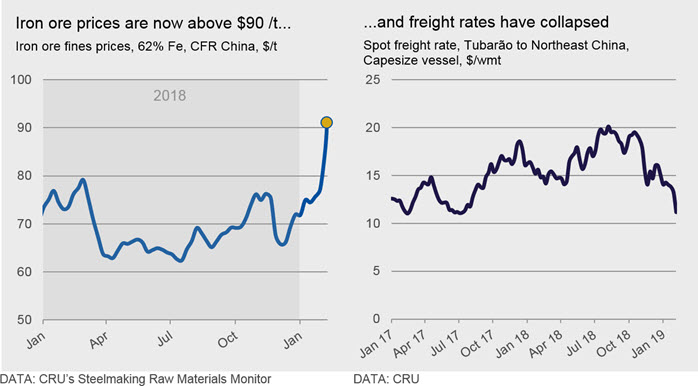 Higher benchmark prices and pellet premia to follow
There is still uncertainty regarding the net loss of supply and the duration of the supply fall. A supply response will follow, but that is likely to take time as restarts of idled mines do not happen overnight. As a result, we expect inventories to be an important source of buffer volume in the short run. The loss of supply in the market will push the cost of the marginal producer higher on the CRU Business Costs curve. Therefore, it is inevitable that iron ore prices will follow a higher trajectory in 2019 than previously forecast. Once other producers start reacting to this higher price environment, we are expecting to see new supply entering the market, particularly from high-cost producers such as Chinese mines, CIS producers and to some extent Australian juniors. The major producers with exceptionally low production costs were already incentivised by high margins to maximise production before the accident. Therefore, we do not expect any change in production targets from these companies in response to the accident. It is worth noting that Rio Tinto produced 338 Mt in 2018 and provided guidance of 338–350 Mt for 2019 prior to the accident, which could see them increase production by up to 12 Mt y/y if they achieve the top of their guidance.

Another implication of the accident will be tighter restriction on wet beneficiation in Brazil. Hence, we are expecting deteriorating quality of Brazilian iron ore going forward and earlier depletions of some mines in Minas Gerais, where wet beneficiation is common.

One type of product that will suffer particularly from a loss of wet beneficiation is pellet feed. This product typically has an Fe content around 66–68%, but with stricter regulation on tailings dams and the use of wet beneficiation, we expect weaker supply of pellet feed and therefore also pellet. This has already started happening as the suspension of the Laranjeiras dam has triggered Vale to declare Force Majeure on pellet contracts. The dam breach is also likely to postpone Samarco’s return to production. The market was anticipating a Samarco return in 2020, which we now see as highly unlikely.