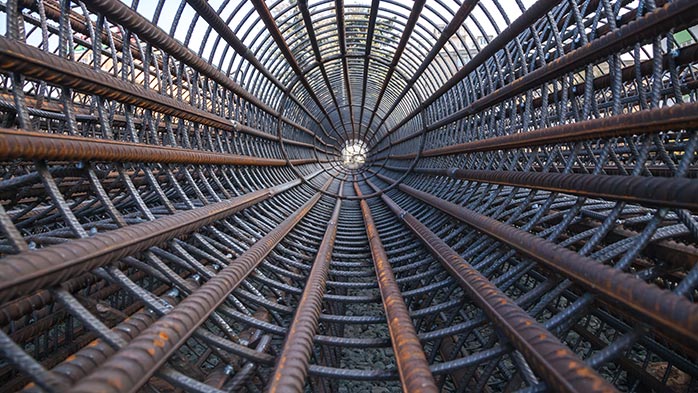 
Since reaching a peak in November 2018, European ferrovanadium (FeV) prices declined 35% in December 2018 as speculators began to unwind their positions and markets reacted to weaker than expected demand from steelmakers in China.

Uncharacteristically for the usually volatile vanadium market, European FeV prices have since settled in a narrow $70-80 /kg trading range throughout the first two months of Q1 2019, before sliding below this range in late March, creating the impression of relative price stability amid finely balanced competing market forces. Going further into 2019, price volatility will return if history is any guide.

This Insight from CRU – drawn from our recently published Vanadium Market and Cost Outlook to 2030 – examines how legislative changes and their implementation in China is affecting the market, what risks the market faces through the rest of the year and why price volatility will continue as the vanadium market faces a turbulent 2019 and beyond. 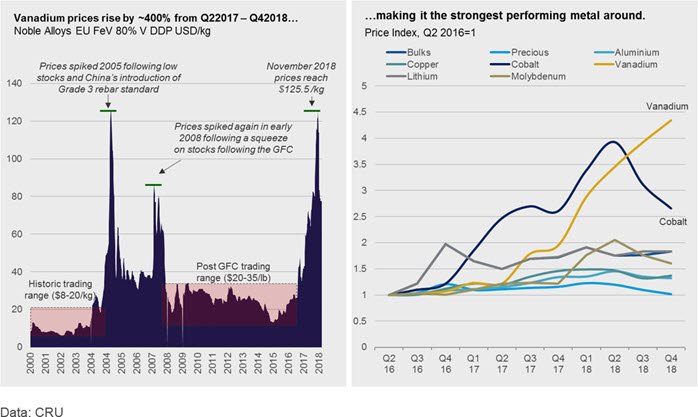 China regulation at heart of the market disruption.
Two regulatory issues in China have been at the heart of the market disruption in 2017 and 2018 – one affecting demand and one affecting supply. The demand side was impacted heavily by updates to the standards for construction rebar. When Chinese authorities announced new rebar regulations in January 2018, mandating sweeping changes to existing operational practises and future micro-alloying requirements (sharply driving up vanadium consumption per tonne of rebar), traders and producers flocked to the market to buy up any material ahead of the November 2018 deadline when the new rules would come into force.

The momentum of the updated rebar standard has been further reinforced by the lack of marginal swing capacity in the form of Chinese stone coal producers. During previous run-ups high-cost Chinese stone coal mines would come onto the market, helping address structural deficits in the market. However, due to changes in the approach to environmental standards most stone coal mines that were shuttered due to lowered prices from 2011-2016 have not been given operating permits. Those that have are for the most part producing small volumes. 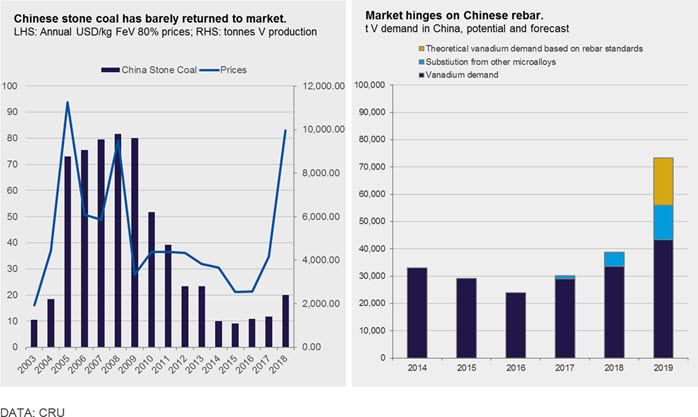 History tells us that apparent price stability in Q1 2019 will not last.
Myopic views of recent price stability should be cautioned for a couple of reasons. In February there were few transactions in large part due to the shutdown of production and consumption in China for the Chinese New Year. Liquidity for all CRU’s regional vanadium benchmarks has decreased due to the outsized role of China in vanadium markets. Liquidity is expected to increase in Q2 2019 and through the rest of the year as steelmakers return to the market, giving a better indication of activity.

History also tells us that price volatility is particularly high when stocks levels are low, such as today. Over the past 20 years, vanadium prices have spiked on three occasions (in 2005, 2008 and 2018), bridged by periods of relative lower prices and apparent price stability. Importantly, there is a non-linear relationship between changes in inventory and price movements. Stock movements above around 4 months’ worth of stock do not have a major bearing on prices while sensitivity increases significantly as inventories drop below around 2 months’ worth of stock. Crucially, the relationship between price volatility and inventory levels is similarly non-linear. When stocks are low, price volatility is high, such as in 2004-5, 2007-8 and 2017-8. By historic standards, and based on current stock levels, Q1 2019 has been an unusually quiet period for vanadium markets – shown in the bottom right chart charting price volatility against inventory levels. 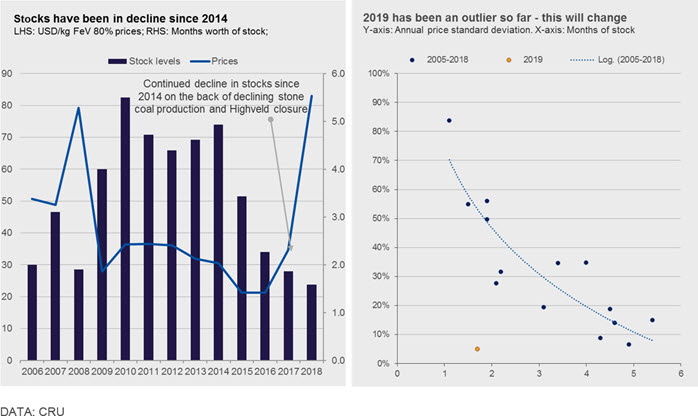 Moreover, there are several variables both with significant potential to affect balances over the next years and with significant uncertainty surrounding their outcome. Between the adoption of new rebar standards, substitution and the timing and scale of new supply, the potential for a mismatch in demand and supply is material.

Adoption of rebar standards: Recently implemented changes to rebar standards in China have had the largest impact on prices and market speculation. Potential new demand from these changes is estimated at ~30 kt V which equates to a 33% increase in global demand over 2017 levels, something the vanadium supply base is unable to achieve in a short timeframe. Since going into effect in November 2018, it has been reported that the enforcement has been carefully managed by regulators in China. This has helped to avoid greater supply chain shocks in the tightly balanced vanadium market, however as enforcement is strengthened throughout 2019 and 2020, the risk of temporary mismatches in supply and demand is significant.

Competing alloys: Another development that has coincided with growing vanadium shortages has been the inroads made by imported ferroniobium (FeNb) in China. FeNb can be used as a substitute for FeV in some applications and is competing in new end-uses. Chinese imports of FeNb increased by ~6-8,000 t in Q4 2018 alone, roughly equivalent to ~3-4,000 t of vanadium or around 5% of the global vanadium market. The supply of FeNb is highly consolidated, with a single Brazilian producer, CBMM, accounting for around 75-85% of global FeNb production. In January 2019, the company announced a $200m expansion from ~100 kt FeNb to ~150 kt FeNb by the end of 2020 which would further boost its market share. This reliance on one producer and project creates risks for buyers and the broader market. As does the fact that past capacity expansions during phases of growth have not stopped consumers of microalloying inputs from reversing their decision – especially in the highly competitive Chinese market. Between reliance on one dominant supplier, a major capacity expansion plan and a highly sensitive price-demand relationship in markets such as China, the impact on vanadium markets will likely be significant, and complex. 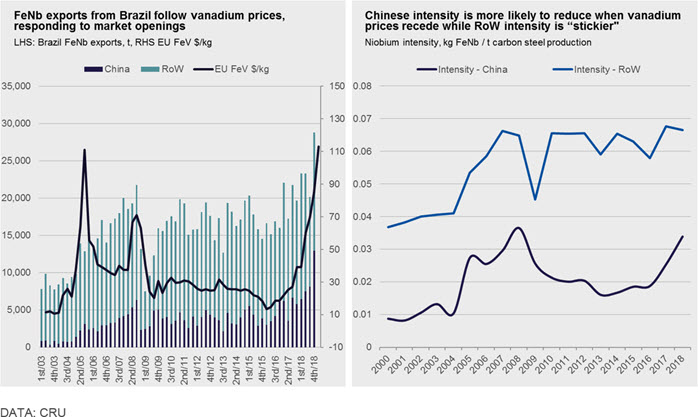 Project pipeline: There is also considerable uncertainty over the size and timing of new supply. Over the past year some smaller brownfield expansions have progressed with most already finished or nearing completion. These expansions of capacity have helped to bring the market back into near balance but have exhausted the “easy wins” for capacity expansion leaving large brownfield and greenfield projects as the primary path for expanded supply. This includes but is not limited to Blackrock Metals’ new Canadian operation, the potential expansion of Largo in Brazil, Bushveld’s Mokopane project in South Africa and the potential restart of Windimurra in Australia, along with restarts and new furnaces in China. Greenfield projects have been historically difficult to bring online in a timely manner. Financing is a significant challenge given vanadium price volatility and price risk, as well as the size of new projects. The pipeline is “lumpy” i.e. an average greenfield project will often account for 4-6% of global demand meaning that each expansion carries with it the potential to significantly affect balances and prices.

Watch out for the possibility of a new boom-bust cycle for vanadium prices.
Price volatility is starting to return after a period of relative stability in Q1 2019, and this will continue if history is any guide. With stock levels at historic lows price volatility will return. But which way will it go?

On the downside, demand side weakness in markets such as China is a key risk. Vanadium production growth in China must also not be discounted on the broader narrative of steel production curbs. Indeed, we believe that significant new co-product supply in China constitutes one of the largest risks for vanadium prices over the foreseeable future given the potential scale and ability to deliver growth quickly. As does more production from stone coal producers. Indeed, European FeV prices since 1 March have declined over 30%.

Going forward however, the price risk in the short term (rest of 2019) appears to be skewed to the upside, relative to today’s level of ~$50 /kg. New rebar standards in China will eat up new output in the foreseeable future, rebar production is expected to return to growth in Q2 and FeNb production is reaching nameplate capacity levels while expansion plans are progressing. Any disruption to vanadium supply in the form of e.g. environmental inspections in China, production shortfalls or force-majeure events would require demand side rationing and higher prices as an incentive – fuelling more investment in new projects and leading to a new boom-bust cycle. Certainly, all indicators suggest that apparent price stability over the past quarter does not last for long.