Brexit means UK and EU companies that trade with each other​ will incur significant additional costs in the form of extra paperwork and potential border delays.


A no-deal Brexit intensifies the pressure on UK steel and metal manufacturing industries, as some products will be subject to EU quotas and/or tariffs. No deal will severely affect the European car industry: not only will car exports face tariffs; the highly integrated supply chain will also come under threat. Any long-term changes to the UK car industry would have significant implications for global trade flows in the metal and mining industry.

After many missed deadlines, the UK and EU have still not reached an agreement on a trade deal to take effect when the Brexit transition period ends on midnight 31 December. Although negotiations are ongoing, both sides have acknowledged the high possibility that an agreement will not be reached.

The most contentious issues remaining are on fishing and a ‘level playing field’ on standards. Standards in the areas of environment, safety and product markets are currently closely aligned between the EU and UK. However, the EU is seeking to control the risk that future changes in standards could result in UK companies facing lower costs relative to their EU counterparts. In anticipation of that, the EU wants to agree a framework now on how those issues will be resolved. One potential solution is offsetting any cost advantage with tariffs, but agreeing a framework for such a system has proved very difficult.

A no-deal Brexit would have serious economic implications, for both the UK and the EU, for financial markets, and for certain sectors.

How will different sectors be affected by no deal?

Failure to agree a deal will mean the UK and EU will trade on WTO terms. This means tariffs at ‘Most Favoured Nation’ (MFN) rates will need to be applied by both sides on each other’s exports. These rates vary hugely between categories of goods, but the overall effect will be to increase costs and reduce trade.

There will also be an increase in non-tariff barriers, as the EU will impose customs controls on UK exports. As well as extra compliance costs for businesses, this could cause disruption and delays at ports. Although a no-deal scenario will probably be more disruptive, these controls will be imposed even if there is a deal.

A no-deal outcome will affect some sectors more than others. Table 1 highlights how a no-deal scenario would impact different sectors. 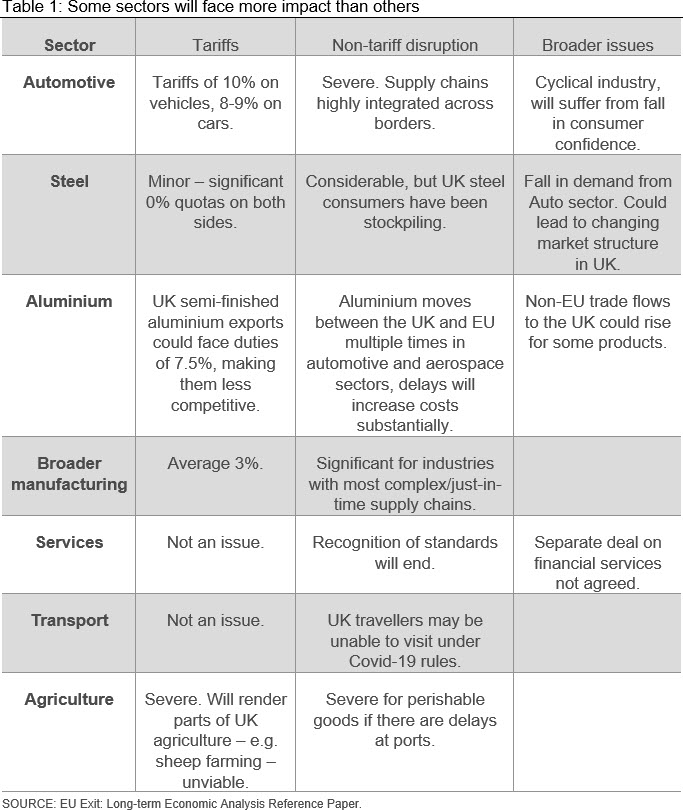 Generally, the impact will be more severe for industry and agriculture than for services. The automotive industry is a particularly important sector at risk. The auto sector has complex supply chains – components often cross the border several times – and is highly tradable, with 80% of UK production being exported. This makes it highly vulnerable to even modest tariffs, and to border disruption.

Although less directly affected by a no-deal scenario, the Steel (click here for more detail - CRU subscribers only) and Aluminium industries may face significant knock-on effects from the auto industry.

What will the impact be on the UK and EU economies?

Modelling by the UK government suggests that the long-run impact of a Brexit with a zero-tariff trade deal will be to reduce UK GDP by 6.7%, relative to continued membership of the customs union and single market. A no-deal Brexit would lead to an even greater negative impact of 9.3%. The impact in the short run could be larger if there is disruption at the border.

With the exception of Ireland, the economic impact for the EU as a whole will not be as large. However, if the breakdown undermines confidence in financial markets, this could magnify the impacts.

What will the impact be on financial markets?

Since the 2016 referendum, sterling has become a currency driven by political events. The recent weeks have been little different, with sterling falling late last week as prospects of a deal diminished, before recovering on Monday 14 December, as the deadline was postponed. If talks break down, sterling will undoubtedly fall against the Euro and US dollar. To a lesser extent, the Euro is likely to depreciate against the US dollar. A stronger dollar could put some downward pressure on commodities, as could any damage to confidence.

A deal covering financial services is being negotiated separately. Failure of a trade deal would bode poorly for the financial services deal. The Bank of England has warned of the risks of financial disruption in the event of a no-deal Brexit, and this could spill over to other sectors, particularly given the dominance of UK institutions in EU capital markets.

For now, both sides continue to negotiate. If a deal is found, tariffs will be avoided. However, a ‘deal’ scenario will still mean trade between the UK and EU will become more complicated. Firms will need to meet new paperwork requirements and this will increase costs – as well as potentially cause some disruption in the short term.

If no deal is found by 31 December, the transition period will end without a trade deal in place. As set out in this Insight, that will cause serious problems for a UK economy that is struggling to recover from the pandemic. It will be an economic blow for EU countries too, although to a lesser extent (with the exception of Ireland). It is quite likely that both sides will end up back at the negotiating table within months, if not weeks.