China will set out its major economic objectives and policy goals for 2020 at the National People’s Congress.


We expect fiscal stimulus of 5-8% of nominal GDP to be announced, half the size of the stimulus that followed the GFC. Most of this stimulus will come in the form of bond issuance (e.g. special treasury bonds and local government special bonds). The biggest beneficiary of this stimulus will be the transport and infrastructure sectors. On monetary policy, we do not expect aggressive interest rate cuts or QE; but efforts will continue to ensure financial markets remain liquid, through lending targets and RRR cuts.

Key macro policy meeting delayed due to Covid-19
China’s government will announce its major economic objectives and policy goals for 2020 at the annual legislative sessions starting on May 22. This meeting is often referred to as the National People’s Congress (NPC). It is usually held in early March but has been delayed this year due to Covid-19. It is an important meeting, as it is where announcements are made with respect to the government’s targets for growth and unemployment, supported by its spending plans – e.g. tax and spending plans for the central and local government.

Employment is primary concern for 2020
The government typically announces a range of macroeconomic targets at the NPC. Outside of China, the focus tends to be on the GDP growth target, as that is what drives trade and commodity demand. But inside of China, unemployment is what matters the most for social and political stability. This difference is magnified this year due to Covid-19. 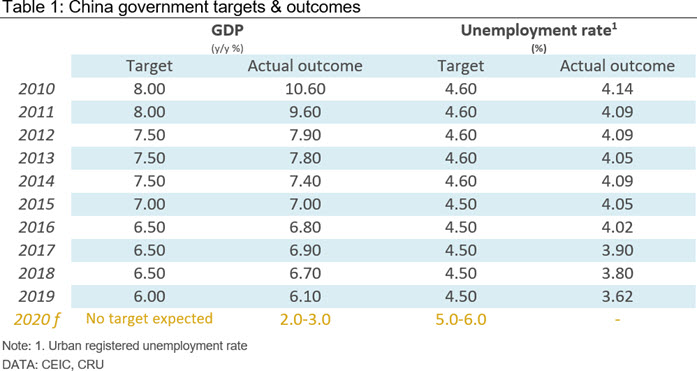 Table 1 shows that China’s GDP growth target has gradually declined since 2010. This is in line with a policy managed slowdown in China. Covid-19 has pushed China off that gradual path, giving rise to a sharp downturn. We expect the growth rate in 2020 to fall to 1.6% and rebound to 8.3% in 2021, as shown in Figure 1. With growth expected to be so low in 2020, the most likely outcome we think is that the government will not set a growth target for 2020.

Employment is the primary concern this year. The very sharp decline in labour demand has been felt by workers – the surveyed unemployment rate rose to 6.0% in April from 5.2% in December (the number is higher if unemployed migrant workers are included). The negative demand shock is exacerbated by a positive labour supply shock – a record number of graduates are expected to enter the labour market this September. Premier Li Keqiang has stressed that a central focus of their macroeconomic policy response will be employment. That is one reason why government support has been targeted at SMEs, which are by far China’s biggest employers. 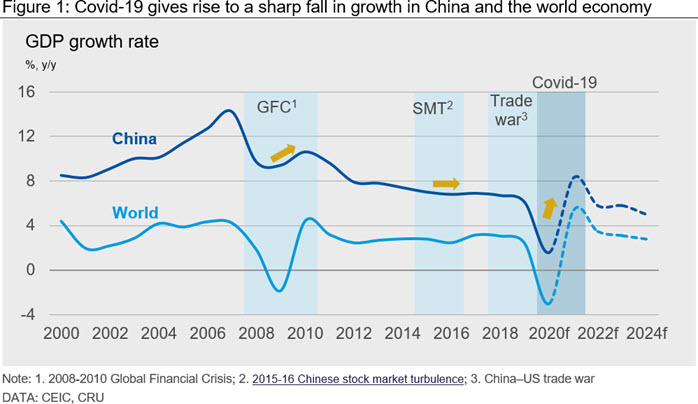 Bonds to play key role in China’s stimulus package
The 2020 fiscal stimulus package will be substantial. We expect it to be 5% - 8% of nominal GDP (this compares to Covid-19 related stimulus of 12% of GDP in the US and 4% in the Eurozone). That is equivalent to RMB 5tn to 8tn (USD 0.7tn - 1.1tn). The stimulus is expected to be larger than previous episodes in terms of monetary value (Figure 2). As a share of GDP, it will be larger than recent years, but smaller than the GFC. China has learnt the lessons that mega-stimulus often leads to a misallocation of resources, lower productivity, and overheated sectors of the economy, such as property.

Last year we explained that the type of stimulus (government spending versus tax cuts) matters. Earlier this year, the government announced a variety of tax reliefs that amount to RMB 1.6tn. That combined with the fall in economic activity has put government finances under pressure. Some, but not much of that, is expected to be relieved by a higher deficit ratio target of 3.5%, up from 2.8% in 2019. Much of it will also come from an increase in the quota for local government special bonds. The limit for 2019 was RMB 2.15tn (the actual issued amount is RMB 2.6tn), and we are expecting this to rise to RMB 4.5tn. That amounts to a stimulus of nearly RMB 2tn – so, large.

In addition, we expect a new form of stimulus this year. We expect the government to issue special treasury bonds. These bonds are issued for specific policies and projects and occur off balance sheet – in other words, they are not reflected in the fiscal deficit. They have only been issued twice before – in 1998 to recapitalise banks as the financial crisis pummelled Asia; and in 2007 to set up sovereign wealth fund China Investment Corp. and strengthen China’s foreign-exchange reserve management. 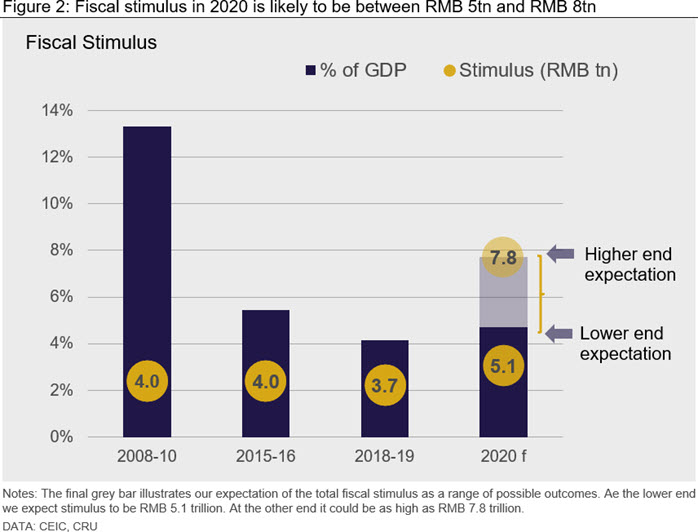 Issuing special treasury bonds will enable the central government to increase the transfer payments to local governments, helping the enterprises and areas hard hit by the virus outbreak pull through and reviving the local economy. There is a large degree of uncertainty about how large this issuance will be. We expect it to be between RMB 0.3tn to RMB 3tn. This range is indicated in Figures 2 and 3. If the outturn is at the lower end that would give stimulus at 5tn or 5% of nominal GDP. If instead the government announces that the special treasure bonds will at the top of our expectation, the total stimulus would amount to 7.75tn of stimulus or 8% of GDP.

Focus on liquidity rather than QE
Monetary stimulus will be used sparingly. We do not expect aggressive cuts in the Loan Prime Rate (LPR) – which has been the new policy rate since August 2019. The People’s Bank of China (PBoC) Governor Li Yang has also been clear that he would not undertake QE – despite a range of emerging markets turning to QE following Covid-19 (see Emerging markets launce QE too). That said, we expect the government to continue to ensure funds are made available for the real economy. These funds can be made available through bank lending requirements or additional cuts to the Reserve Requirement Ratio (RRR). 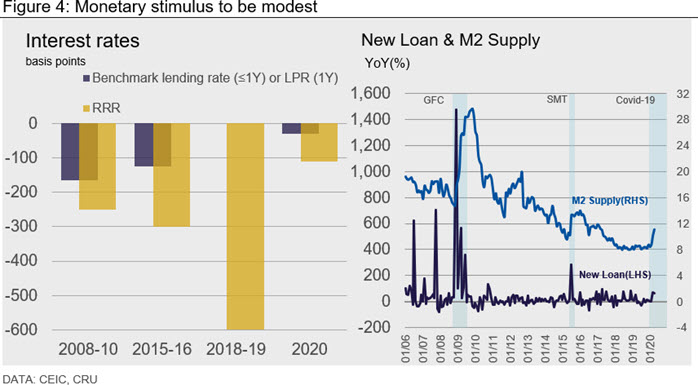 Key beneficiary is government’s “new infrastructure” scheme
We expect China will announce a substantial stimulus package to deal with the Covid-19 pandemic. How this stimulus is spent matters to the economy and commodity markets. We expect transport and the construction and infrastructure sectors to be the key beneficiaries.

The Chinese Politburo introduced a new investment scheme called “new infrastructure” at its meeting on March 27. This new infrastructure covers the physical and organisational structures and facilities, such as buildings, smart roads and power supplies, needed for a high-tech society. It will involve next generation IT – 5G networks, data centres and industrial internet services. This scheme also covers public sector labs – tech parks and R&D centres.

In addition to spending on new infrastructure, Chinese Politburo have stressed that existing traditional infrastructure projects will be accelerated. This includes shantytown renovation and the replace and refurbish of existing infrastructure and buildings. 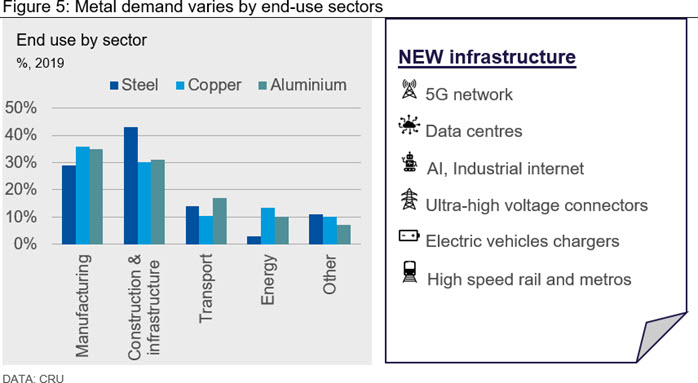 Beijing to deliver large but targeted stimulus
Covid-19 has been a large unexpected shock hitting China and the world economy. In response we expect China to announce a substantial stimulus package of 5%-8% of nominal GDP. Whether it is closer to 5% or 8%, depends on Beijing’s appetite to issue special treasury bonds – only used twice in the past. If they go all out, and issue special treasury bonds at the top end of our expectation, we will revise up our growth outlook for China in 2020. An 8% stimulus package would be good news for the economy, and even better news for commodity markets. 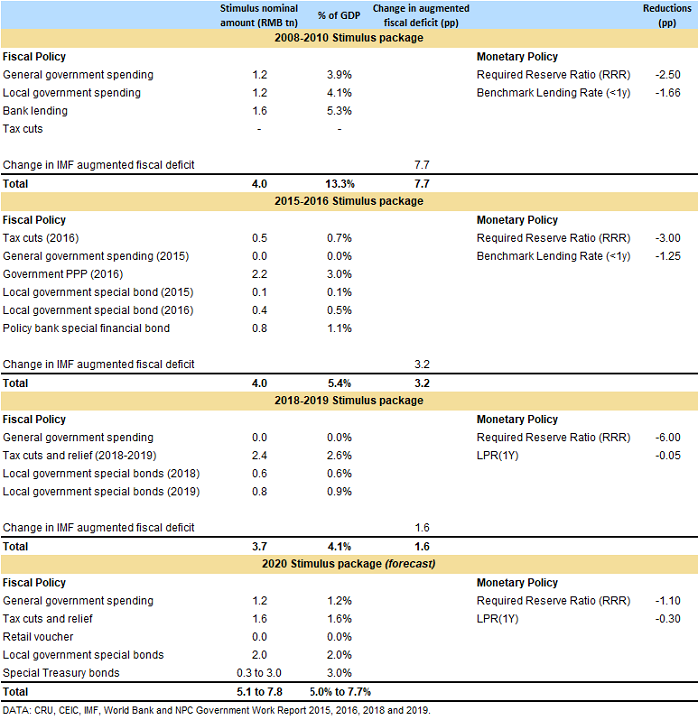 The EUA price will increase from the current ~€84 /tCO2 to €85–90 /tCO2 over the next four weeks.  A consensus is forming in the European Parliament (EP) on climate... 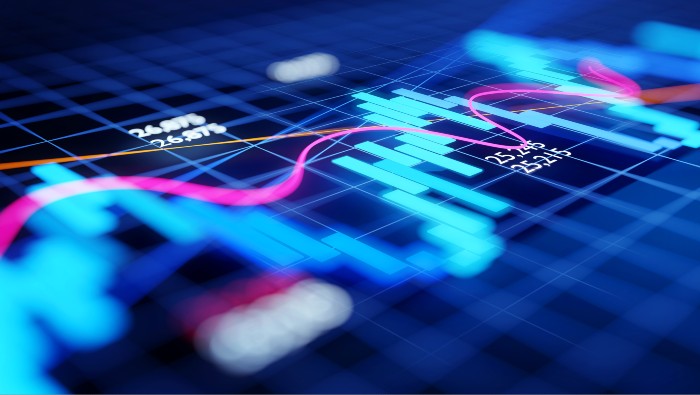