The global outbreak of coronavirus Covid-19 has killed more than 15,000 people and has put millions into isolation. Notwithstanding the human cost, the effect on markets has been pronounced.


The pandemic has hit the Chinese EV sector hard, and CRU believes that weak sales will last at least until early Q2 2020. Nonetheless, we continue to forecast Chinese EV sales growth in 2020 over 2019’s total.

EV sales in China dropped 75.2% y/y in February, with a decline of 79.1% for the whole Chinese auto industry. This was a far steeper fall than many expected but in line with our warnings in our previous analysis. 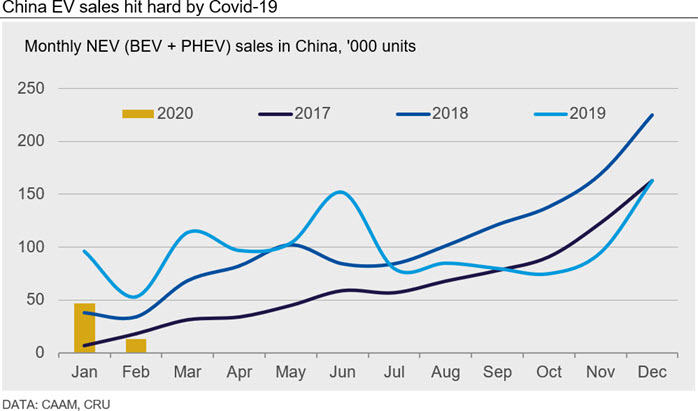 CRU expects the Chinese EV market will remain becalmed until at least April. This is based on our market calls, analysis of the epidemic timeline and the review of the necessary measures the Chinese government has taken to fight Covid-19. Despite the steady decline of case numbers in China, many consumers continue to be wary of visiting dealerships. However, it is worth noting that the subdued sales in January had little to do with the virus outbreak as it was not until January 23 that the government announced the lockdown of Wuhan city and the Chinese New Year holidays followed the next day.

Despite the disruptions to Q1 2020, we expect EV sales to grow slightly this year for the following reasons. 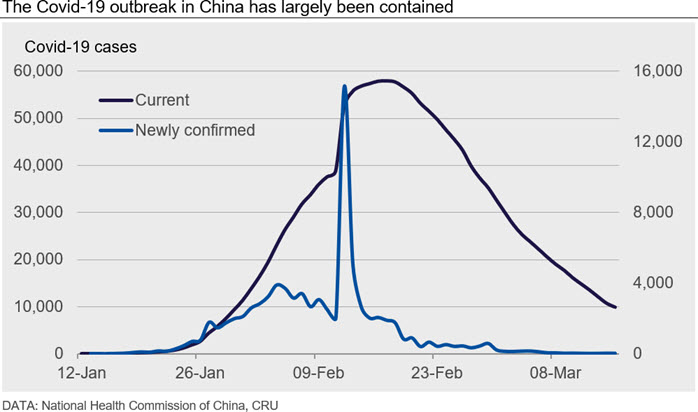 Our base case view is that Covid-19 will have only a relatively short-term impact on the Chinese EV sector, and we still believe that total sales in China can grow slightly this year. However, we will be monitoring developments and large risks remain, not least a marked global economic slowdown as countries outside of China enact measure to control the spread of Covid-19.