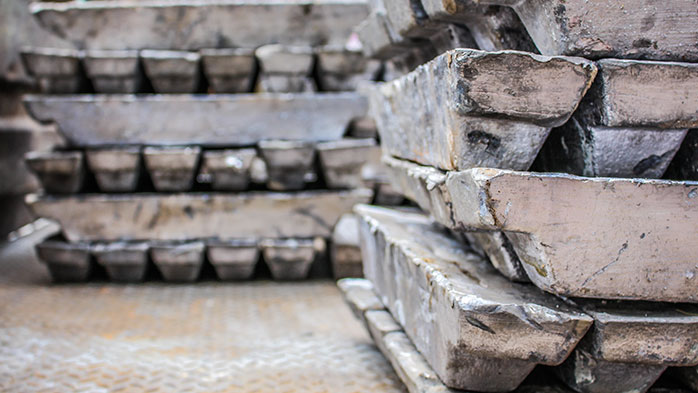 Rather than returning to work from 31 January, the New Year holiday pause this week in Chinese activity is being extended to varying degrees around the country in an attempt to contain the spread of the disease.


The government has extended the current holiday nationwide until 3 February, with longer extensions until 10 February in many other cities/provinces – including Shanghai, Tianjin, Changsha, Chongqing, Fujian, Yunnan, Jiangsu, Zhejiang, Henan, Shandong, Anhui, Jiangxi, Heilongjiang, Inner Mongolia and Guangdong. The outbreak source city of Wuhan is set to remain in lockdown indefinitely, while the surrounding province of Hubei has just announced that the post-holiday restart of any business has been postponed until 14 February. So, the seasonal dip in lead demand and production will be longer-lasting and more pronounced than around previous New Year holidays – the uncertainty revolves around exactly how much longer and how deep the dip will prove to be.

Battery makers extend downtime…
Regarding Chinese lead demand, over 90% of downstream consumers (mainly lead-based battery makers) were planning to be out of production in the last week of January, with some halting operations earlier this month in light of poor end-user demand and weak lead prices. Some smaller battery manufacturers were already planning to stay idle until mid-February, but larger-sized ones had been expected to reopen next week. Those located in the cities/provinces named above will have to delay resuming for at least another week. Further downstream, most battery distributors and retailers are also unlikely to return to work until 9 February at the earliest, depending on how the outbreak unfolds between now and then. 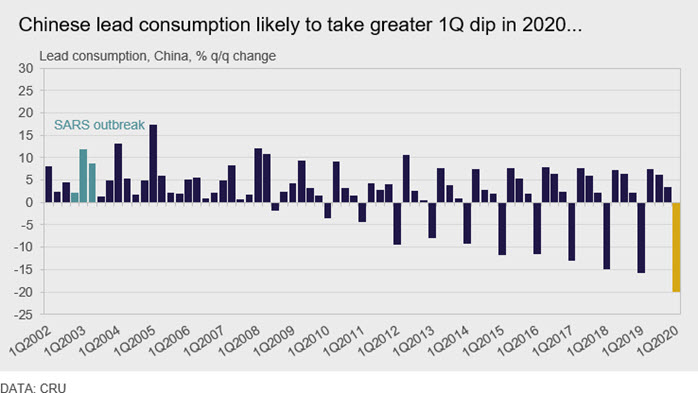 CRU reckons that Hubei, the outbreak source province, maybe accounts for around 10% of the country’s lead-based battery production. However, the disruption is clearly more widespread, so the short-term hit on Chinese lead consumption is going to be marked. Using the 2002-2003 SARS outbreak as a guide to the likely hit from 2019-nCoV on Chinese lead demand provides little help. Back in the early 2000s lead usage was growing rapidly at ‘double-digit’ pace amid the Chinese ‘boom’ years of largely unchecked economic and industrial expansion – SARS did not noticeably ‘check’ this growth. In the first quarter of the last five years, Chinese lead consumption has dropped on average by 13% quarter-on-quarter with each year also seeing a bigger fall than the one before. It seems highly likely that the 1Q2020 drop will surpass this average.

…and primary smelters may join already idled recyclers
Turning to the country’s supply side, many lead recyclers had already cut or halted production since early January. However, most that had planned to resume operations next week are delaying any return until the second week of February. Moreover, even when companies attempt to return to work, it remains unclear how much disruption there will be to the scrap feed supply chain to smelters, given the transport restrictions in place across the country. The same concerns apply to the flow of mined lead concentrates from domestic mines and imported material from ports to primary lead smelters. Just before the holidays began, the majority of primary smelters were planning to maintain relatively stable production through late January and into February. These plans could now change, with some perhaps taking some ‘unplanned maintenance’.

While Hubei has no known lead-producing mines or primary smelters, it is still a notable lead recycling base, accounting for approximately 10% of Chinese secondary lead production, if down from closer to 20% in the early 2010s. As for demand, the short-term ‘seasonal’ hit on Chinese lead production is going to be more marked than usual. Also, SARS provides little guidance as production, like demand, was growing at ‘double-digit’ pace in the early 2000s. However, it also seems highly likely that Chinese lead production in 1Q2020 will drop quarter-on-quarter by more than the average of 14% seen in the first quarter of the last five years. 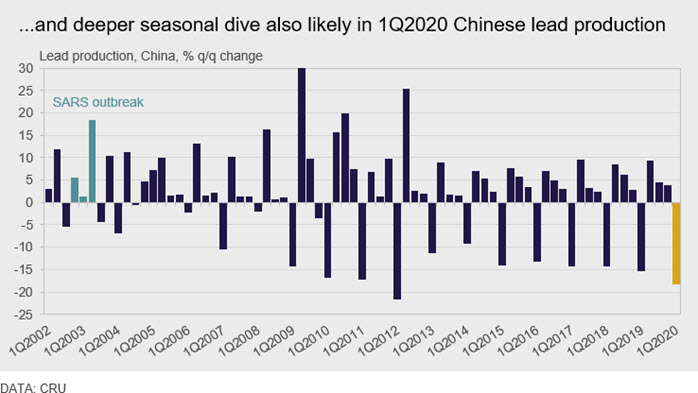 SHFE price to play catch-up
The scale of the detrimental impact on Chinese lead prices will be revealed on 3 February when the Shanghai Futures Exchange (SHFE) is set to resume trading, despite the broader holiday extension in Shanghai to 9 February. Just how many industry players return to participate in trading in Shanghai and elsewhere remains to be seen. Before trading ceased ahead of the holiday break, SHFE lead prices had already dipped below RMB15,000/t to touch lows last seen in September 2016. A big drop seems likely, as SHFE plays catch up to big falls already posted in LME lead prices that finally succumbed this week to the wider panic-selling in base metals. After briefly breaking above $2,000/t in mid-January, LME lead values retreated at one point earlier this week to test support at around $1,800/t, close to 2019 lows. 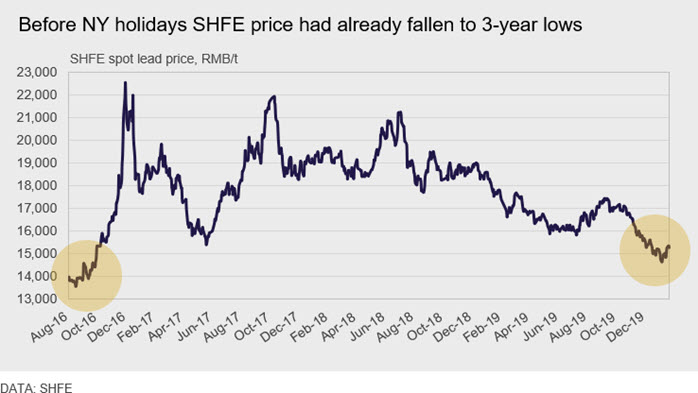 One final point is that the dominance of investors in lead trading will undoubtedly result in continued volatility in daily lead price movements, with SHFE set to follow the falls in the LME lead contract, as this story continues to unfold. Investors’ concerns are well-founded, given that China accounts for just over 40% of both global lead consumption and production.  Moving upstream from metals to mined concentrates, this country is also still a crucial importer of material from around the world. Any notable weakening in Chinese smelter demand would have a big impact on easing lead concentrate availability outside China and even the possibility of this happening should put upward pressure on annual smelter treatment terms currently being negotiated with miners. Chinese has always mattered. The novel coronavirus outbreak will tell us exactly how much in the weeks ahead. 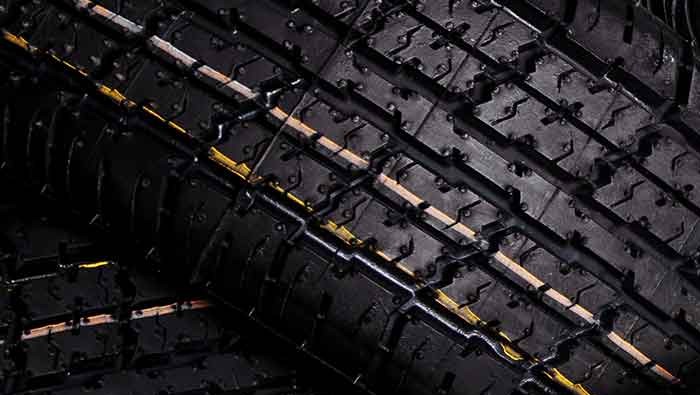