Given the importance of China to our industry, this Insight sets out the potential impact of the Wuhan coronavirus on commodity markets.


Using the SARS episode as a benchmark, the impact on Chinese GDP and industrial production could be as large as 1% – but that estimate comes with a large margin of error at this early stage, as we are still learning about the virus. The impact on global commodity prices was virtually zero during the SARS epidemic, but the commodity price and demand impact is likely to be much larger now, given that China consumes around half of the world’s commodities today.

Background
The first outbreak of the 2019-nCov was in Wuhan, in mid-December. The virus is a member of the family of coronaviruses and is 75-80% identical to the SARS virus, which the WHO dates to have started in November 2002 and continued into late 2003. In only 10 days from January 16, the number of infected people in China went from 45 to almost 3,000. On Tuesday January 28 the death toll reached 106, with confirmed cases reported in 12 other countries (including the US, Japan, France and Singapore). But the silver lining, according to the Chinese National Health Commission, is that 51 people have recovered from the virus, and therefore have been discharged from hospital.

More than 60 million people in 15 cities in China have been fully or partially locked down since the virus outbreak. On top of this, the Chinese government has extended the Chinese New Year public holidays, to delay the mass migration of people back to work.

In terms of geography, Wuhan is the capital of Hubei province with 60 million people. Its central location and proximity to the Yangtze River means it’s an important logistical hub for China. It is also an industrial centre and home to the second largest automaker – DFAC – with whom foreign automakers including Nissan, Honda and Renault have joint ventures. 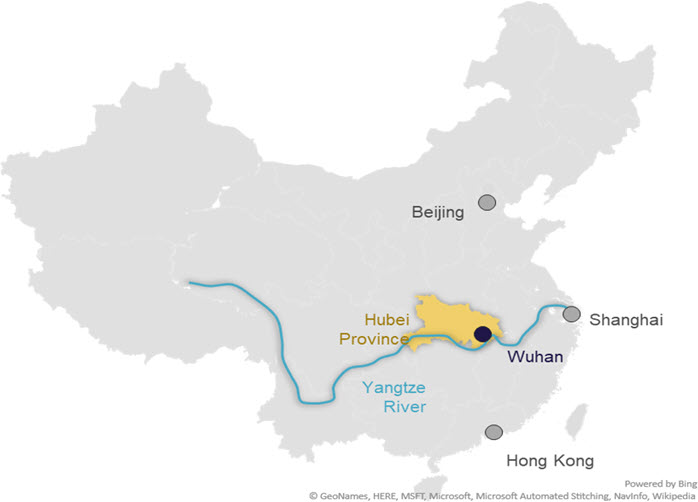 Sizing the Wuhan coronavirus: how bad was SARS?
A virus outbreak is a rare occurrence – economists refer to it as a ‘black swan’ event. It is hard to predict the economic impact of rare events, particularly when the story is still unfolding. We can size the potential impact of this virus, by looking at previous outbreaks. The most obvious reference point being the Severe Acute Respiratory Syndrome (SARS) outbreak in China. The start of the outbreak is dated as November 2002 by the WHO, it continued well into 2003.

The table below provides an assessment of the economic impact of SARS. A caveat here is that it is hard to isolate the SARS shock from all other factors that affected the data at that time. The global impact was estimated at $30–100bn. It led to an estimated 1% decrease in Chinese GDP, a 0.5% fall in GDP for Southeast Asia, and a negligible impact on global growth. The number of visitors to China fell dramatically shortly after the onset of SARS around November 2002. There was also an initial drop in retail sales. The reduction in industrial production and auto production came later, around the first half of 2003. Annual industrial production growth fell by 0.8%, auto production levels fell by 5%. 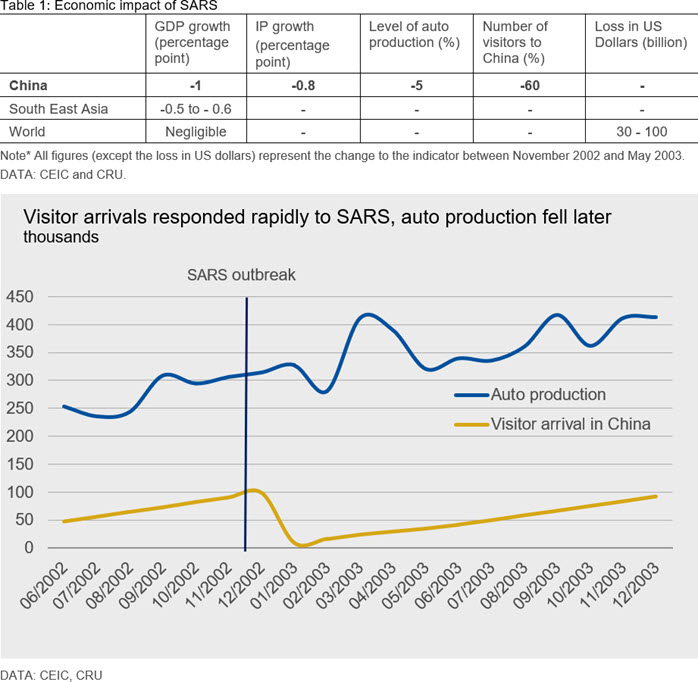 Within China, we can see the virus having an immediate impact on retail sales and tourism. Depending on the severity of the outbreak, it is likely to show up with a lag in other economic data such as car production, construction and industrial production. 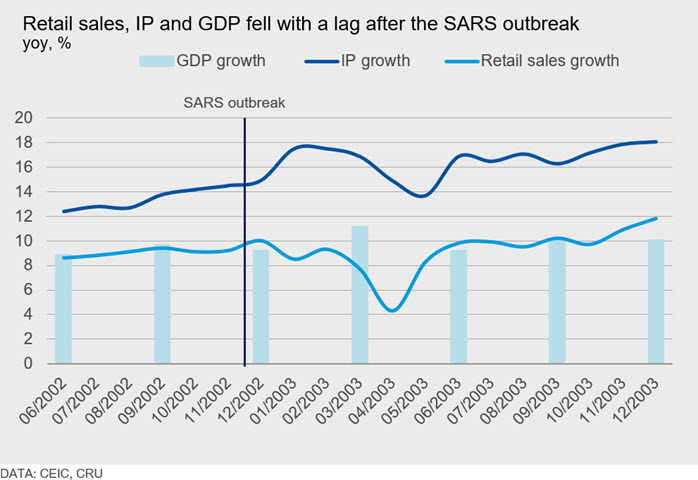 Hubei is the most populous province in Central China, accounting for nearly 5% of national retail sales. The virus has constrained the movement of people, leading to panic purchases of food, and petrol. But as the lockdown continues, there may be a more prolonged fall in the demand of petrol.

Hubei is also one of the largest automobile production regions in China, and home to WISCO (Wuhan Iron and Steel Corporation), a subsidiary of the steel producer Baowu. It also holds over 30% of China’s phosphate fertilizer capacity and has several phosphate rock mining regions. The lockdown and extended holiday period are likely to result in production outages.

China has acted much more quickly and efficiently in recent weeks relative to its response to SARS. Its prompt response has been praised by the World Health Organization (WHO). While taking severe measures to control the virus early on might lead to larger short-term effects, containing the virus is likely to reduce the overall longer-term impact.

Secondly, on medical grounds, the virus is different – it is spreading before symptoms are noticeable, but the fatality rates so far seem to be lower. And technology is much more advanced than in 2002, meaning a vaccination is likely to be ready more quickly.

Transmission to the rest of the world
Whatever the impact of the virus on China, its global impact is likely to be larger than SARS. That is because China is now the second largest economy in the world and more interconnected with other economies than it was fifteen years ago. China’s economy is 4.5 times larger than in 2002; and China’s exports 3 times more, now accounting for around 12% of global trade. Chinese nationals became the largest spender on tourism abroad in 2012 and currently spend ~$250bn abroad every year, compared to ~$150bn by the US.

When considering how a shock in China can transmit to the rest of the world, the following illustration is useful. Transmission typically occurs through linkages between China and the rest of the world through trade, financial and confidence channels. Typically, financial markets are the first to respond, and according to economic theory can overreact. Given concerns and uncertainty, the travel response can also be very rapid. 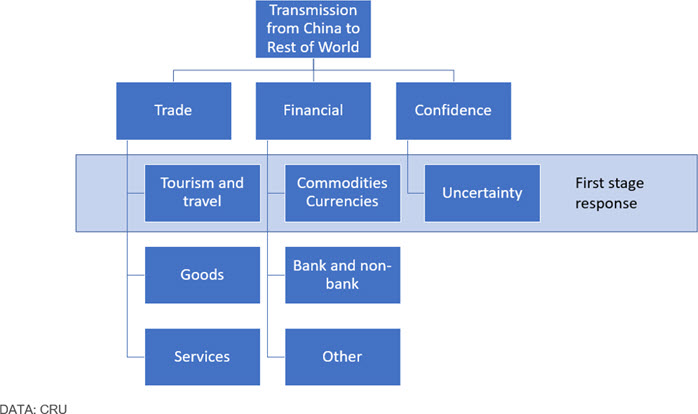 Commodity markets are letting their voices be heard
China currently consumes nearly half of the world’s commodities – it represents 50% of world copper and 60% of Iron ore consumptions. Commodity markets are letting their concerns be heard. Iron Ore, Copper, Brent crude prices all fell, following growing concerns about Chinese growth outlook. On the flip side, demand for safe-haven assets such as gold and 10-year US treasuries have strengthened since mid-January.

This commodities market response is as expected, given that it is well known that financial markets often are the first to respond to changes in economic sentiment. Within commodities, copper and oil prices, which are heavily traded in futures markets, play a special role as a bellwether for the global economy. Currency markets have so far been relatively calm, but should the assessment of the situation worsen we may see a depreciation of the RMB/$ exchange rate.

Global commodity prices hardly moved during the SARS epidemic. That is consistent with the much smaller role that China’s had in world commodity markets at that time – accounting for only 20% of world copper consumption and 25% of the world Iron ore consumption. 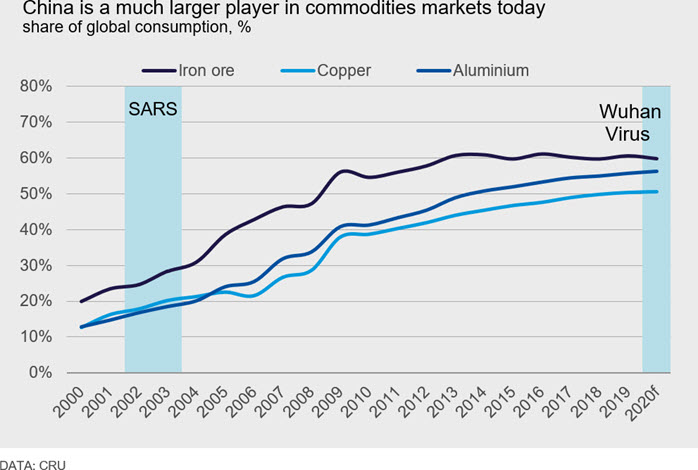 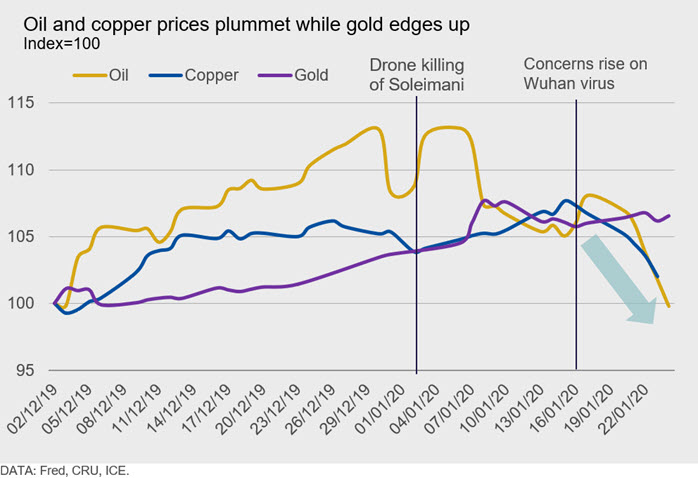 Stock markets also reacted negatively to the news, worried that the virus outbreak could hurt China’s growth. Unsurprisingly, since last Monday, the Shanghai Composite Index fell by almost 4% since the start of the year, relative to a mixed picture in other major equity indices.

Time will tell what the impact the Wuhan coronavirus will have on both the Chinese and global economies. In the near term, key uncertainties around economic impact of the virus include: (a) how successful the Chinese authorities will be in containing the virus (b) how consumer and business sentiment will respond (c) policy actions such as monetary and fiscal easing. But what is clear for now is that commodity markets are not waiting to find out.