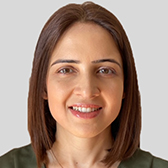 CRU published the latest version of the Technical Ammonium Nitrate (TAN) Market Outlook in October 2020. The report explores supply and demand fundamentals, describes major trade routes and the drivers behind them, and provides price forecasts for 2020-2024 for the opaque explosives grade nitrates market.

This insight provides an overview of how global demand is expected to recover in the wake of the Covid-19 pandemic, an update on regulations following the Beirut disaster, and summarises the medium-term fundamentals in the TAN market.

Global ammonium nitrate (AN) demand totals ~40 Mtpy and is split between technical (TAN) and fertilizer (FGAN) uses. TAN is an industrial explosive, used as a cost-effective measure in the removal of large volumes of rock. TAN and FGAN are produced within the same chemical process, using natural gas or ammonia as feedstock, with final products distinguished by density. However, the TAN market is distinct from the rest of the nitrogen industry in its end uses, with mining activity accounting for approximately 95% of global demand. TAN demand is driven by the performance of consumers in extractive industries such as coal, rather than the agricultural fundamentals that play a key role in the much larger nitrogen fertilizer market.

Global TAN demand is greatest in the mining/material extraction industries that require the removal of large volumes of material. Coal mining is the largest individual consumer, representing 35% of global demand. Other notable sectors that hold significant shares of demand include iron ore, copper, limestone and gold, each of which represent 10-13% of consumption.

The initial wave of Covid-19 sent global financial markets and commodity prices into a downwards spiral in H1 2020. The economic uncertainty and imposition of lockdowns around the world lowered CRU’s global industrial production index in Q2 2020 to its lowest level since Q3 2016. This slowdown in industrial production and collapse in power generation impacted global coal demand. TAN demand for coal extraction is forecast to decline by 12% year-on-year in 2020. Other sectors that require TAN demand such as metal extraction, limestone and construction have fared far better than coal consumption. 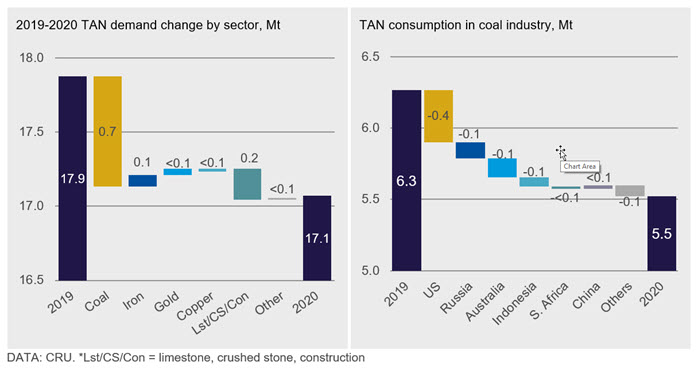 Global consumption is forecast to increase from 2021. This will be driven by a recovery in coal mining, which is forecast to be supported by a return to growth in power generation and industrial production rates. Significant risks remain towards our outlook for the global TAN market in 2021, especially if demand for power generation recovers slower than currently expected. If further measures are taken to slow the spread of Covid-19, such as local lockdowns, energy demand could slow again and prompt cutbacks in global coal production.

The potential for further reductions in limestone, crushed stone and construction demand must also be considered. However, CRU expects that the impact on these sectors would be less severe compared to coal, as countries are likely to be better prepared for a second wave of infections. The scenarios below consider two possible outcomes on global TAN demand for coal mining.

Scenario 1: IP rates and power demand come under pressure in Q4 2020 and Q1 2021 as countries struggle with tackling Covid-19 infection rates over the winter. TAN demand for coal extraction recovers to the base-case forecast by 2023.

Scenario 2: A prolonged downturn in power demand throughout 2021 that results in new thermal coal projects being delayed or even cancelled. This results in further acceleration towards renewable energy solutions, with TAN demand for coal not recovering to pre-pandemic levels until 2023. 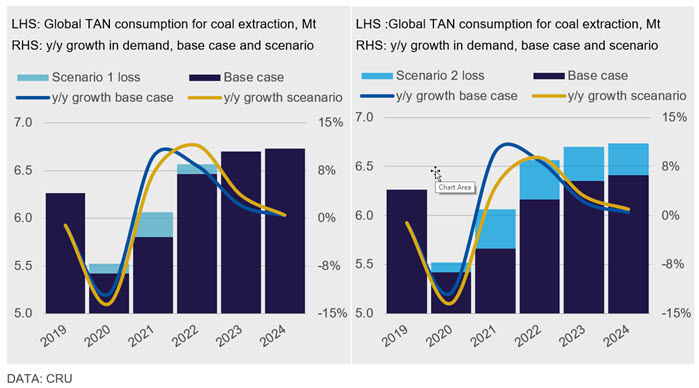 The uncertainty in TAN demand could soften the projected recovery in prices and result in lower exports from higher cost producers, especially those without the flexibility to switch to FGAN. Traded volumes could be lost from exporters that traditionally send product into markets where coal holds a large share of demand, such as Australia and India.

In August 2020, 2,750 t of AN exploded and devastated Lebanon’s capital city and main port. The disaster resulted in the deaths of at least 220 people. Concerns surrounding the safety, storage and handling of AN were understandably raised again in the wake of the incident.

AN regulations previously came to public attention in August 2015, following an explosion at Tianjin Port in China that resulted in the deaths of 165 people. The latest incident is not expected to have a marked impact on the global TAN market, as in the aftermath of both explosions it became apparent that the primary cause was incorrect handling or unsafe storage facilities.

China has implemented the most noteworthy safety procedures since the Beirut incident. Following the Beirut explosion, the Chinese government implemented three new rounds of safety inspections on hazardous chemicals. A nationwide inspection on hazardous chemicals was be carried out immediately, focusing on ports, wharves, warehouses, and chemical industrial zones. Many AN producers were forced to idle production, as high on-site inventory levels concerned officials. Chinese producers are now allowed to only store one-to-three days’ worth of production on-site, which may impact operating rates in the short-term until supply chains adjust to the new regulations.

Furthermore, TAN exports have been temporarily banned by the port authority at Lianyungang port since 5 August 2020 and by Qingdao port authority since 10 September 2020. It is unlikely that a complete ban on exports will be implemented, although the Chinese government and port authorities are expected to heighten supervision on TAN production, storage, logistics and exports in the aftermath of the explosions. 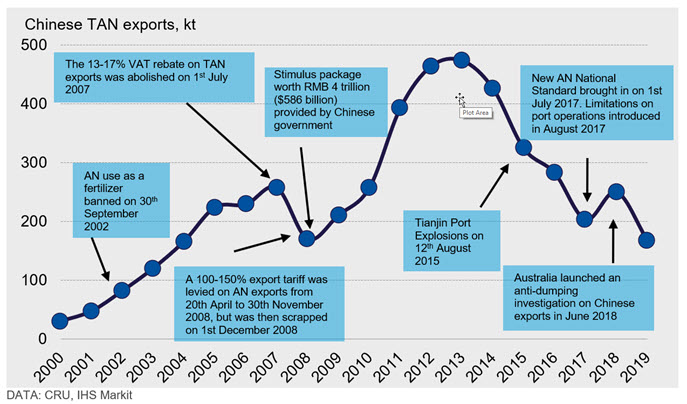 Incidents involving AN are often swiftly followed by a wave of stricter storage and handling regulations, with good reason in cases where AN has been mishandled or stored unsafely. However, an industry-wide overhaul in regulation is not deemed the best approach because several countries have a mature and efficient AN market.

We think it is highly likely that officials in Lebanon will introduce strict localised regulations on AN once the country comes to terms with the devastation in Beirut. Initial reporting suggests a clear failure in AN storage procedures at the port and authorities will launch a more detailed investigation once the initial state of emergency has been handled. The regulation is likely to focus almost entirely on port storage, given that Lebanon has no domestic consumption of AN. Other major international ports not typically used to dealing with AN may also choose to review or reinforce their hazardous chemical regulations.

The TAN market is tightening

Global TAN capacity additions have slowed considerably since a wave of investment between 2011 and 2017. China represented 30% of this global capacity growth, resulting in exports from China increasing and peaking at ~0.5 Mt in 2012 and 2013. Global utilisation rates declined from 2013 and bottomed out in 2017, as demand failed to keep up with the rapid growth in supply. 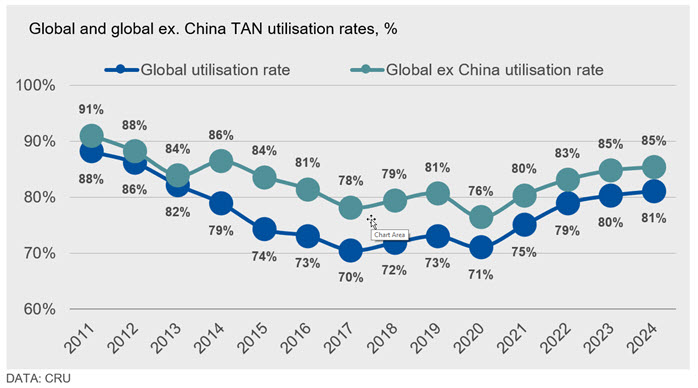 The decline in global utilisation rates resulted in a decline in prices from 2013 to 2017. However, during 2018 and 2019, prices recovered as the wave of additions slowed, along with capacity consolidation and increasing safety concerns in China. In the wake of a slowdown in capacity investment, demand growth in the next five years will be mostly met by higher utilisation rates at existing plants.

A market with opportunities and challenges

The TAN market has been hit by the Covid-19 driven slowdown in mining activity, most notably in the coal sector. The near-term outlook for the market will be contingent on the shape of the recovery from Covid-19, particularly the role that rebounding energy demand will play on coal for power generation.

The tragic AN explosion in Beirut in August 2020 reignited the debate over storage and handling regulations and standards in the industry. The overwhelming majority of AN trade continues to take place without incident, although some localised tightening of restrictions in countries such as China could disrupt trade flows in the near-term. While there are several challenges in the outlook for TAN, there will also be many opportunities ahead for existing market participants and adjacent industries alike.

CRU’s Technical Ammonium Nitrate Market Outlook explores the topics outlined in this insight in more detail. Other important market drivers such as Australian anti-dumping duties, global trade flows, key producer updates and future capacity additions. In addition to the report, the Technical Ammonium Nitrate Market Outlook includes databases covering the demand split by end-user sector, production, imports and exports on a country-by-country basis, and global capacity by plant for the 2011 to 2024 period. Please get in touch with via the button below to find out more.