When we last looked at the IMO 2020 MARPOL Annex VI policy back in 2018 Q4, there were many sources of ambiguity in terms of the outlook.


These included scrubber uptake, fuel options and availability, freight rates and the expectations on policy enforcement. As we approach the 1 January 2020 deadline for the policy, we have greater clarity on the likely impact of the policy on fuel prices. CRU’s view is that the IMO 2020 regulation is likely to raise freight rates by around 10-20%.

Scrubber uptake has been more prevalent than anticipated
From our discussions with Maritime Strategies International (MSI) and other active participants in the freight market, we now expect a higher uptake of scrubbers. We estimate that 20-25% of the larger Capesize vessels will have scrubbers fitted by end 2020. For the mid-size Panamax vessels, the uptake is lower at 5%. The smaller Handymax vessels are unlikely to install scrubbers at all. Considering the share of each type of vessel we calculate that in 2020, 10%-15% of total ocean-going freight capacity will employ scrubbers, rising to ~20% by 2025. More Capesize capacity will be fitted with scrubbers because the vessel size and the typical length of voyage mean a larger volume of fuel is burned making the capital investment and the pay-off period much more attractive. In addition, Capesize vessels generally travel on fixed routes between very large ports (e.g. Brazil or Australia to China), where the likelihood of the high sulphur fuel oil (IFO180) being available is greater than that of a small port.

We have revised our process for calculating the optimal time period over which the investment in a scrubber is expected to be paid off. We now consider only the difference in freight rates as the variable that will determine the optimal pay-off period. As a result, the pay-off period is now expected to be 12-18 months, on average. Of course, we expect this to vary between different shipowners for a variety of reasons.

Of the vessels fitted and due to be fitted with scrubbers, most have opted for the open loop option (where the exhaust gases are washed with sea water and discharged into the sea). This comes as a surprise as closed-loop scrubbers initially were considered to be more environmentally friendly as the ‘waste’ was instead disposed of after treatment at ports. However, since some studies have concluded that there is no notable negative environmental impact to using open loop vessels, many companies fitting scrubbers are willing to take the risk; they are assuming that there will not be a subsequent policy to remove open-loop scrubbers from operations any time soon. Open loop scrubbers cut down on installation and running costs, along with the logistics of carrying and disposing of the waste. There are some regions (Singapore and Fujairah) where an open loop scrubber is not allowed to operate, but until we see such controls at major ports such as Rotterdam, Qingdao and Newcastle the movement of bulk vessels will be largely unaffected.

Fuel blending will achieve compliance
Bunker fuel is a residual fuel of the oil refining process, it is cheap, has high sulphur content and has been the standard fuel used by the shipping industry. The most common types of bunker fuels are IFO 380 and IFO 180, in our work we have focussed on IFO 180. The IMO regulation will limit sulphur emissions and therefore requires shipowners to consider the options available to comply. Fuel blending will be key to achieving compliance. The extent to which fuel type needs to be changed depends on the extent to which emissions need to be cut. Prior to the implementation of IMO 2020, the sulphur emission limit outside the emission control areas (ECAs) was 3.5% m/m. However, after talking with the IMO, we feel that 2.5% m/m is a more accurate figure for actual emissions.

Going forward, and based on our view of scrubber uptake, we judge that the remaining ships will meet the new emission requirements by using a blend of fuels – essentially by mixing IFO 180 with the low sulphur content marine gas oil (or MGO). MGO (essentially equivalent to diesel) has a very low sulphur content. In comparison to bunker fuel, diesel is a middle distillate and is more expensive. Therefore, refiners will blend fuels to produce a low sulphur fuel oil of 0.5% m/m sulphur content to meet the new regulatory limit. While we appreciate the refining process is more complex, we have used a ratio of 5/7th MGO and 2/7th IFO 180 to model the price of low sulphur fuel oil needed for vessels to be compliant. We have termed this fuel effective bunker fuel (also referred to as Very Low Sulphur Fuel Oil or VLSFO). When we consider the requirement for significantly more diesel fuel for the blending process, given the proportion of vessels committed to using bunker fuel with a scrubber, we expect 2Mbbl/d of the 5Mbbl/d bunker market (3.2Mbbl/d - IFO 180/380, 1.25Mbbl/d – MGO, 0.55Mbbl/d - others) to move from IFO 180 to MGO fuel. Put another way, 60% of the existing demand for IFO 180 in the shipping industry will disappear thanks to the new IMO regulations.

A refiner’s headache
The IMO 2020 regulation has caused significant impact to the freight market. As is often the case with policy changes however, there are consequences for other sectors and, in this instance, the refining industry will bear a large brunt of the adjustment in the near term.

Historically the average price of the lower quality IFO 180 has been around 80% of the price of a barrel of crude oil. If the IFO 180 is no longer needed by the shipping industry, the refining industry must find a way to deal with this by-product and make 2Mbbl/d of MGO available to blend for the IMO compliant fuel. Some refineries have invested in secondary refining equipment and cokers, allowing them to reduce the output of residual fuels and, instead, produce more middle distillates like MGO. Companies that have not invested in secondary refining processes could purchase sweeter crudes in a bid to produce low sulphur distillates. If the demand for sweeter crude increases by enough, this could increase the spread between the prices of sweet and sour crudes. Finally, as the blending process becomes consolidated and stability and compatibility issues get ironed out, we may see vessel owners opting for diesel fuel, which could put further upward pressure on diesel prices.

Fuel price forecast
Based upon our current Brent crude price forecast and considering the change in both the supply and demand fundamentals for both MGO and IFO180, we forecast the price of low sulphur marine gas oil (MGO) to average $680/t in 2020 before falling to $600/t in 2021. We forecast IFO 180 prices to drop significantly to $350/t in 2020 as demand falls substantially. Our effective bunker fuel (or VLSFO) reaches $588/t as the regulation comes into effect before falling slightly to $530/t in 2021 as the market normalises. 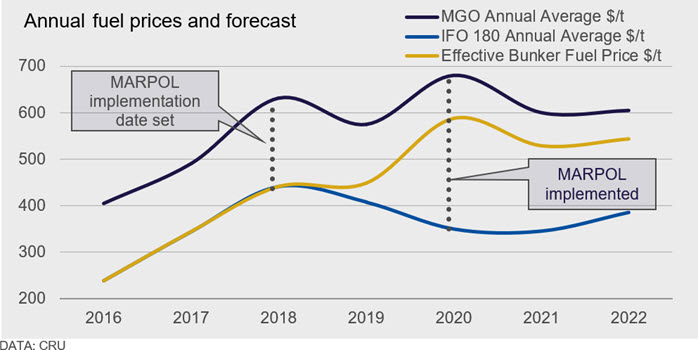 IMO 2020 is likely to raise freight rates by around 10-20% for given routes
Using CRU’s proprietary freight rate model, we have run scenarios to compare the cost of transporting bauxite, via a Capesize vessel, on a ‘short route’ from Australia to China and a ‘long route’ from West Africa to China. We compare the 2019 freight rates for each as well as a ‘scrubber’ and ‘no scrubber’ option.

The results of the long route (W. Africa to China) are quite different and are shown in the table above. While the ‘scrubber option’ again is cheaper than the ‘no scrubber option’, the saving is significantly more in value, but as a percentage it is the same at ~15%. Similarly, those with scrubber fitted vessels will charge the rates of the no scrubber, but in this case the pay off period is lower, at <1 year, than that of a vessel travelling a shorter distance.

Based on our freight model analysis, the incentive to fit a scrubber exists for those travelling long routes consistently. It is important to note that neither of our examples consider opportunity costs, the demand for fitting or closed loop options.

Adherence to be monitored at ports
When a vessel enters a Port State (a country where the vessel enters and with whose laws the vessel must comply) then those States can apply the IMO principle of ‘no more favourable treatment’ which allows for compliance checks even if the ship is under the flag of a non-ratified nation. All findings from these inspections would then be published by regional port state control authorities. As such, all inspector teams would be alerted to the non-compliant vessel so it would be likely to face more scrutiny in its future travel. Therefore, its value for offering time charters would be reduced as demand for flagged vessels in the system would clearly be significantly lower. Thus, the system should be self-enforcing given that the financial repercussions would impact the demand of the vessel directly.

The Marine Environment Protection Committee (MEPC) instructed the Secretariat to update the existing tabs in the Global Integrated Shipping Information System (GISIS) for better functionality, including: updating the types of fuels and sulphur contents that are listed; allowing for multiple ports to be entered in a single entry; allowing searching by port or compliant fuel (adding a port list could assist with this); aligning with the Fuel Oil Non-availability Reports (FONAR); adding check-boxes on fuel oil quality; and improving the selection of regulations.

Economic picture in 2020
Global GDP growth in 2020 is expected to be 2.5%, the same as in 2019. Thus, oil demand is likely to grow only modestly and, combined with plentiful supply, we expect oil prices to be stable in the range of $60-$65/bbl. We expect the dollar to continue to be strong, potentially constraining the demand for commodities from net importers due to their weaker currencies and lower purchasing power. But there is downside risk to our growth forecast. Should these materialise, it will lower global trade and the demand for freight thus pushing down on freight rates. In other words, the weaker demand picture can offset some of the increased costs of freight rates that follow from the implementation of the IMO regulation.

Sulphur emissions are just a drop in the ocean— CO2 will make a much bigger splash
The implementation of the IMO 2020 regulation will be felt by multiple industries throughout many supply chains, including freight, oil refining, metals, mining and fertilisers. Targeting sulphur emissions is just the start of a much longer-term process towards making the shipping industry more environmentally responsible. The IMO is looking to carbon emissions next, with a target of reducing CO2 from shipping by more than 50% by 2050 compared to 2008 levels. We should expect more policies to come that will change the cost structure of the metals, mining and fertiliser industries, much like the IMO 2020 regulation has done.