Impact of the novel coronavirus on the optical fibre industry 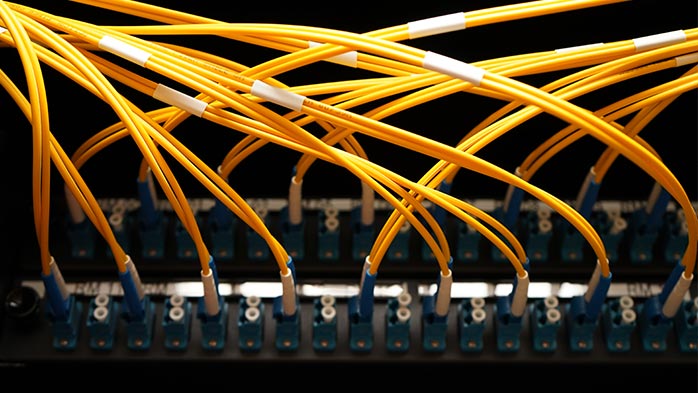 The novel coronavirus (2019-nCov) outbreak in Wuhan, Hubei, has led to Chinese New Year holidays being extended and transportation restrictions introduced in order to contain the spread of the virus.


Demand is usually weak during this period, but production usually continues, albeit at reduced levels. With Wuhan alone accounting for over 20% of Chinese preform capacity, any significant and ongoing disruptions could make a discernible impact to domestic and indeed global supply. Furthermore, any impact on other dominant fibre and cable manufacturing provinces such as nearby Jiangsu would compound the issue, but all assessments remain highly speculative at this early stage.

Background: what is 2019-nCov and what is the latest response from provincial governments?
In only 13 days from 16 January, the number of people infected with the coronavirus in China went from 45 to almost 6,000, plus over 9,000 suspected cases. On Wednesday 28 January, the death toll reached 132, with confirmed cases reported in 12 other countries, including the US, Japan, France and Singapore.

More than 60 million people in 15 cities in China have been fully or partially locked down since the virus outbreak. On top of this, the Chinese government has extended the Chinese New Year public holidays, to delay the mass migration of people back to work. In Shanghai and nearby Suzhou in Jiangsu province, the holiday period has been extended further, until 9 February. Meanwhile, the Hubei Provincial Government have determined a further extension, suggesting the resumption of work across all industries will not take place before midnight on 13 February.

Where is Wuhan and Hubei and is it important to the fibre optic industry?

What does this mean to the fibre optic industry?
In terms of geography, Wuhan is the capital of Hubei province with 60 million people. Its central location and proximity to the Yangtze River means it’s an important logistical hub for China. With regards to Wuhan and wider Hubei’s importance in the domestic and indeed global fibre optic industry, it cannot be understated. Although any assessment of the likely impact of the virus on the Chinese optical fibre industry remains highly speculative currently.

Out of the ‘Big 5’ Chinese producers, two of them, YOFC and Fiberhome, have a significant presence within the province of Hubei. YOFC’s wholly owned preform factory in Wuhan, with an annual capacity of 64M F-Km is one of the biggest preform manufacturing facilities in the world. YOFC also have two JV operations with Shin-Etsu with a combined capacity of 64M F-Km also located in Qianjiang, Hubei. Meanwhile, Fiberhome’s JV with Fujikura is located in Wuhan and has an estimated capacity of 33M F-Km.

Wuhan alone (Fiberhome’s JV and YOFC’s wholly owned facility) accounts for 21.0%, or 99M F-Km of China’s domestic preform capacity of 460M F-Km in 2020. This is a significant share, although if we include YOFC’s JV’s with Shin Etsu in wider-Hubei, this share rises significantly, to 35.0% of domestic Chinese preform capacity—equivalent to 20.3% globally.

The impact to the wider Chinese fibre optic industry beyond the limits of Hubei also need to be considered. For example, YOFC’s preform plants supply fibre drawing and cabling operations around the country as well as internationally. Disruptions to supply routes such as this will likely have a much wider reaching impact.

Regarding cable production, again it is both YOFC and Fiberhome’s integrated plants that are under the spotlight. In our latest Telecom Cables Market Outlook report and before the outbreak of 2019-nCov, CRU estimated annual cable production in 2020 for both facilities to be in the region of 46M F-Km. Whilst Wuhan’s importance in the cable market is less compared to preform, it still accounts for around 18.5% of domestic and 9.7% of global output. If we include the approximate 6-7M F-Km CRU were anticipating for Kaile, located in Jingzhou City, Hubei Province, these percentage shares rise to 20.9% and 11.0%.

Any potential impact would have been heightened just a few years ago
Whilst any prolonged closures and reduced output of preform, fibre or cable from Hubei will no doubt be felt within the domestic market, following a series of expansions and new factory construction outside of Wuhan and Hubei, any potential impact has now been lessened. If we take a look at Hubei’s share of domestic preform capacity over just the last few years, we can see from the chart below that in 2018 it actually accounted for almost 42% of China’s capacity. Diversification and new factories set up in provinces elsewhere, such as Jiangsu, Shandong and Zhegiang have ultimately reduced China’s dependence on Wuhan’s Optical Valley and the wider Hubei area, which could serve to shelter it somewhat from any long-lasting closures in response to 2019-nCov. 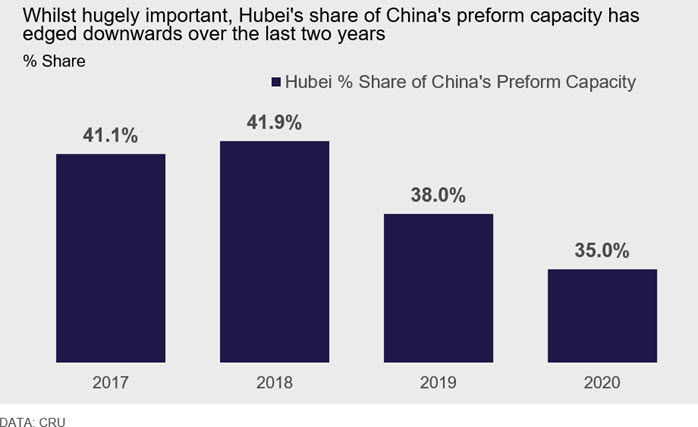 Wuhan: a key strategic base for preform, fibre and cable – what is the impact to international markets?
As mentioned above, the province of Hubei and indeed the city of Wuhan are strategically positioned and act as key conduits for trade of near-countless commodities including fibre. This relates to both internal transfers, preforms for drawing elsewhere, or indeed exports to international markets. Indeed, if we look at Chinese bare fibre exports by port location, we can clearly see the importance of Wuhan, and indeed nearby Shanghai on international trade. If any notable and prolonged closures of Hubei’s key factories are enforced, we could see restricted export volumes and disruption to the entire domestic fibre optic industry.

However, given the low average utilisation levels currently in China, it is likely that the numerous other fully integrated producers elsewhere could ramp up production to offset any potential declines in output from Hubei. Furthermore, consumers could look to utilise overhanging inventories as a supply source. 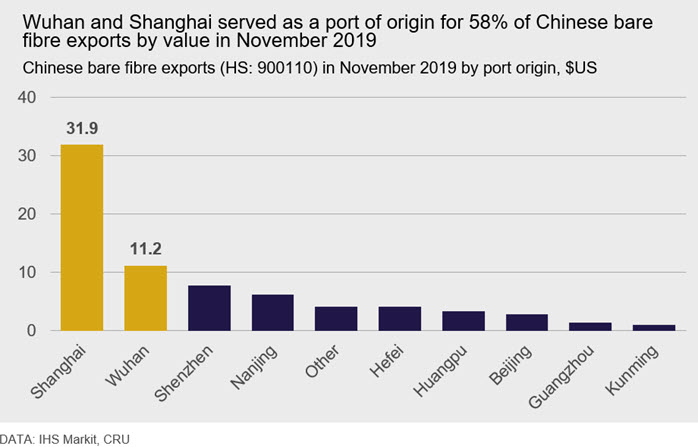 Can outages bring the domestic market back into balance?
This certainly could be the case. As we have previously discussed, extended closures of operations in Hubei will likely lead to at least a temporary lull in provincial output, although it is worth remembering reduced operating levels are normal over the Chinese New Year period. With that in mind, even just an unplanned two-week closure of preform factories in Hubei could remove up to 1.3% of China’s annual preform production based on average weekly output over 2019.

From a bare fibre perspective, CRU retain the view that overhanging inventory within the domestic market has reached 24M F-Km. In order to rebalance, and assuming no changes to other factories output and demand, closures of almost 8 weeks across Fiberhome and YOFC’s factories would be required.

When will activity improve?
The question that remains uncertain at the moment is when the measures to reduce the spread of the virus will end. We are currently looking at activity improving when people outside Shanghai and Suzhou return to work next week, alongside the scheduled return to work of employees in Hubei on 13 February. However, the spread of the virus is still accelerating, so some level of restrictions may well continue further into February and there is some evidence that this is now happening. Whilst there is little certainty currently, it is just worth remembering how important Wuhan and the wider Hubei province is with regards to the optical fibre industry.

There are many unknowns around the likely extent of the virus’ spread, the Chinese government’s response, further transport restrictions, and any impact on logistics. CRU will be tracking developments closely over the coming month and endeavour to update subscribers as and when the situation becomes clearer. In the meantime, please do not hesitate to reach out if you would like to discuss this issue in more depth.