The European Commission (EC) has completed its review of the safeguard measures and published the new safeguard regulations on the 29 June 2020. In this CRU Insight, we explain proposed changes, and our expectations for how this may affect the markets.


The declared purpose of the safeguard measures is to protect against a threat of serious injury to the Union industry resulting from an increase in redirected import volumes, in part a consequence of the US Section 232 measures. At the same time, the EU is taking into consideration the interests of its steel-consuming industries and aims to strike a balance in its management of import flows.

The move toward more managed trade is a key trend which is being evidenced across multiple regions. Other than the EU safeguard system, the USA is a clear exponent of such an approach—for example with a network of AD/CVD tariffs as well as the Section 232 and 301 trade barriers. There are several other examples of this including ongoing developments, with a recent eye-catching example being bilateral meetings held between the Chinese and South Korean steel sectors regarding the desirability or otherwise of a recent upswing in volumes going into China.

The EC has changed its management of major quotas

Safeguard volumes will not be reduced
Contrary to the expectations of many market participants, the quota volumes have not been reduced despite the fall in demand realised as a result of the Covid-19 pandemic. The total volumes for each product group will be increased by the standard 3% established in an earlier revision for the quota period between 1 July 2020 and 31 June 2021.

This increase will ensure that the European market will stay well supplied with import material, especially as demand has been weakened by the pandemic.

This means that countries will no longer have access to their entire quota at the start of the quota period, and we can expect to see more staggered imports over the year. Ostensibly this is to help mitigate any potential supply tightness at the end of the quota period. Certain country and product combinations, such as Chinese metallic coated sheet, previously exhibited behaviour whereby the entire annual quota was filled almost immediately upon opening, in this case within a single day. There would appear to be no barrier to this simply happening four times per year in future, rather than once.

It should be noted that the amended safeguards allow quarterly carry-over of unused quota volumes of major exporters as already in place for the “Other countries”, residual quotas.

Hot rolled coil will be receiving country-specific quotas, likely to reduce total import supply
The EC states that the underutilisation of this quota over the past year means that there is little risk of a shortfall of supply, and so has decided to revoke the special treatment of this quota.

The countries to receive their own quotas will be Russia, Turkey, India, South Korea and Serbia. There will also be an “Other countries” quota for the product, which will retain the 30% cap on usage by any single country in the final quarter of the quota period. Aside from South Korea, all of these countries have historically exported more HR coil to the EU than these quotas would have allowed in at least one quarter over the last year. This means that they will not be able to maintain these exports at their current levels, and EU buyers will have to diversify their sourcing to compensate. Turkey will be most affected, as HR coil exports to the EU reached over three times what the quota would have allowed in Q1 2019 if it had been in place at the time. The “Other countries” quota appears to be heavily inflated compared to historical trade figures, as non-major exporters only made up a small percentage of total EU HR coil imports in 2019. 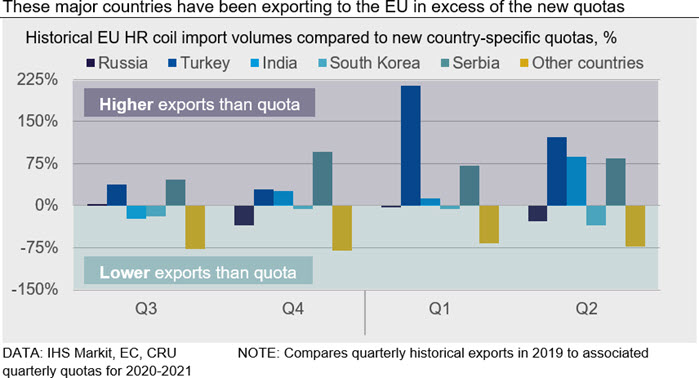 Carbon HR coil import volumes are likely to reduce as major export origins will mostly receive quarterly quotas that are below their recent volumes into the EU. When combined with other trade barriers already in place it is not clear that the tail of “other countries” could entirely fill the gap. See also a recent Insight on the launch of an antidumping investigation against Turkish HR coil (CRU Subscribers only).

Other quotas have also been tweaked

Stainless HR coil will receive a global quota
The EC noted that almost all major exporters of this product are already covered by AD/CVD measures and are therefore less able to utilise their quotas. To avoid a possible supply shortfall, a global quota will be established for this product instead.

This will offer exporters more freedom as they will able to access much larger quota volumes than before. This will support Indonesian HR exports in particular, as these previously had a small available quota. CRU is of the view that, despite HR AD/CVD measures, imported material into Europe will still be competitive.

The first quota will be global, as the current large welded tubes quota already is. The second quota will be country specific, like the quotas for other product groups.

There will be new limitations on access to the residual quotas
The proposal sets out three complex regimes, where almost every product group falls under one of these regimes. The new guidelines will restrict how a major exporter with its own, exhausted quota can access the “Other countries” quota for a certain product. Currently, a country which has exhausted its own quota can freely access the “Other countries” volumes in the last quarter of the quota period (i.e. calendar Q2)—with a few product specific exceptions. Under the new regimes, certain product groups will have the access to the “Other countries” quota limited, based on the “degree of crowding out” observed by the Commission.

The changes to the European safeguards will make it more difficult for importers to reliably time their shipments, as the new quarterly structure means that it will be easier to accidentally exceed the quota. On the other hand, the move from annual to quarterly quotas will avoid the filling of a quota early in the year—spreading out imports over the year instead of concentrating them around July.

In addition to this, while individual quota volumes were not reduced, the changes to the hot rolled coil quotes will significantly restrict imports from certain countries compared to historical levels.