Despite the niche size of the global potassium sulphate (SOP) market, prospective producers in both Eastern Africa and Australia have successfully attracted external funding.


Two projects in the latter are now entering the final stages of construction, meaning Australia will become the industry’s newest supplier next year. High and stable SOP pricing, low production costs and a reasonably small initial capital outlay have all aided the success of some prospective producers in their capital raising efforts. However, capacity overinvestment in the large Chinese domestic market during the mid-2010s demonstrated SOP prices are not impervious to supply pressure. With many large, low-cost, export-orientated projects under development, SOP prices outside East Asia could face similar pressures longer term. This Insight explores the question of wider overcapacity in the industry, a topic covered in more detail in CRU’s upcoming Potassium Sulphates and Potassium Nitrate Market Outlook, published in January 2021.

CRU tracks more than 50 projects worldwide (excluding those within China) with plans to produce SOP, either from natural resources (primary) or through chemical conversion of MOP (secondary). These range from those at early-stage prospecting all the way to final construction.

Although we are aware of at least one SOP project on every inhabited continent, development has centred on two key regions: the Danakil Depression straddling Ethiopia and Eritrea, and Western Australia. Prospective producers intend to extract SOP (in addition to other potassium salts) from primary hard rock or natural brine resources.

Projects in both regions have successfully attracted external capital. In Western Australia, Kalium Lakes and Salt Lake Potash are now in the latter phases of construction at their respective Beyondie and Lake Way projects, with first production expected next year. In Eritrea, Danakali has raised most of the required development capital for its Colluli project.

However, global SOP demand – in terms of absolute sales – accounts for less than 10% total potash consumption. It remains a reasonably niche sector of the wider potash industry. Yet, of all the potash projects CRU monitors, around a third plan on producing SOP.

SOP: What is the attraction?

Among the reasons prospective producers – and financial backers – may seem disproportionately interested in SOP, two stand out: SOP’s wide and stable price premium over MOP, and the industry’s two-tiered cost structure.

Most potash consumers use MOP for their requirements as it contains the highest concentration of potassium (60-62% K2O) and is the most abundant and widely traded form. It is also by far the cheapest source of K2O. However, its high levels of chloride make it unsuitable for application on certain crop types or in arid climatic conditions.

In these instances, a low chloride form of potash (or potash-bearing) fertilizer is usually preferred by the consumer. SOP is the most popular form of low chloride potash largely due to its high 50-52% K2O content.

SOP suppliers charge a significant premium over MOP – given the more specialised nature of its demand, but also due to higher production costs. At the time of writing, standard grade SOP export prices (on an FCA basis) commanded an absolute premium of around $230 /t over import prices of granular grade MOP (on a CIF basis) in Western Europe.

Moreover, this premium has endured for much of the last decade. Since late October 2013, SOP prices in NW Europe have remained (on average) more than $200 /t above those of MOP. This longevity has drawn the attention of many prospective producers. 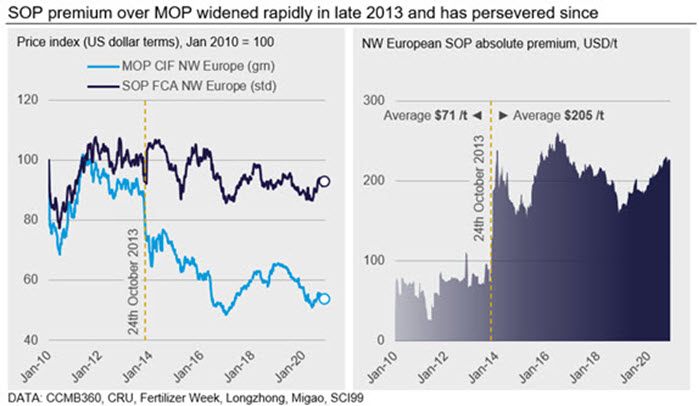 In addition to consistently high and stable pricing, the SOP industry’s cost structure has played an equally important role in attracting prospective producers. This is particularly true for those looking to develop primary resources.

In 2020, SOP produced from such sources supplies around half of global demand. Secondary producers – most of whom use the “Mannheim” process to chemically convert MOP to SOP through the addition of sulphuric acid at high temperature – supply the remainder.

In most instances primary producers incur significantly lower costs than their secondary counterparts. Crucially, the higher costs of secondary production maintain SOP prices – meaning Mannheim-route producers act as the marginal suppliers to the market. Secondary production will remain a feature of SOP supply over the long term. Primary sources of SOP are reasonably rare and secondary production also offers some benefits over primary routes, such as the ability to produce SOP with enhanced solubility. 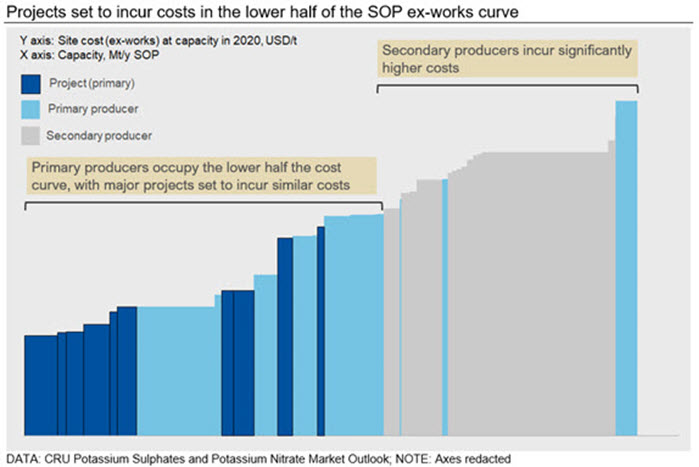 The combination of sustained elevated prices and high marginal costs has driven prospective producers to develop new deposits. East Africa and Western Australia are the epicentres of this activity.

It has also influenced decision-making amongst capital providers. Those providing funding for new SOP projects have deemed the risk of potential price erosion from increased supply to be acceptable given how high marginal costs sit.

The smaller scale of primary SOP projects has also proven beneficial in attracting external financing. Development capital is usually in the hundreds of millions of US dollars, rather than the more typical billions for a greenfield potassium chloride mine. Numerous prospective producers of MOP have also adopted this approach, focusing on the development of smaller-scale units to reduce the initial capital burden. 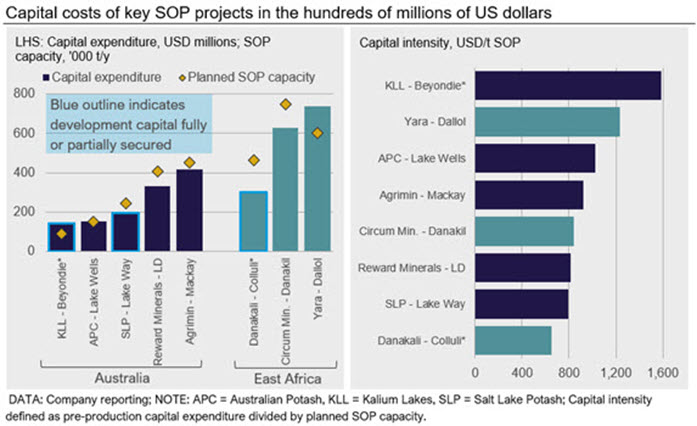 An additional factor which emboldened lenders was the resilience of SOP prices in many downstream markets despite a sharp rise in Chinese exports in 2019. This followed the country’s decision to abolish self-imposed export tariffs at the start of last year. Chinese SOP subsequently trebled and remain high in 2020, but price erosion has been limited outside East Asia.

Potash viewed as “green” by miners and lenders

Mining companies and capital lenders to the extractive industries are facing increasing pressure to decarbonise their portfolios. A number have identified the potash sector as one potential route to address this. Most potash production processes emit significantly less carbon than those used to make metallic products or other (nitrogen and ammoniated phosphate) fertilizers.

Small-scale, primary SOP projects are currently of little interest to large, diversified miners or major capital providers to the extractive industries. Nevertheless, the “greener” image of potash production has certainly aided prospective producers in their capital raising efforts. This is particularly the case in Western Australia, with many of the state’s key mined commodities – such as iron ore – facing intensifying environmental scrutiny.

What impact will new supply have on the SOP market?

CRU currently projects the SOP market to remain reasonably balanced over the next five years with demand growth broadly expected to match capacity additions. However, with many projects still vying for financing – some of which are of a considerably larger scale than those currently included in our base case – further investment in new capacity appears probable. The prospect of oversupply beyond the medium term is very real and is important to consider.

One major SOP market has already witnessed the impacts of overinvestment in SOP capacity: China. Since 2008, the country’s domestic capacity has more than trebled, reaching just under 7 Mt/y in 2020.

After an initial expansion in 2009, high SOP prices during the mid-2010s encouraged another wave of investment in largely Mannheim-based capacity. However, in Q4 2015, domestic Chinese SOP prices collapsed with consumption no longer able to keep pace with supply growth. In the six months between Q3 2015 and Q1 2016, domestic prices fell by more than $160 /t, shedding around a third of their value. SOP’s premium over MOP within China has averaged less than $90 /t since. Despite the resilience of SOP prices in many markets outside China, under enough supply pressure they too will buckle. 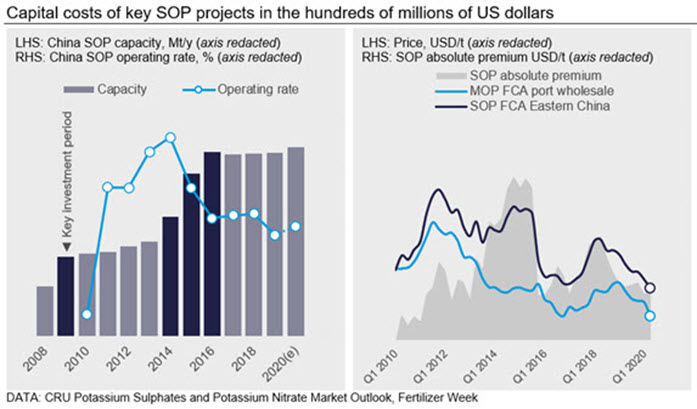 Additionally, SOP prices across different downstream markets currently vary widely. Amongst the four major SOP price benchmarks for which CRU assesses (FCA Eastern China, FCA NW Europe, FOB Utah and FOB Taiwan, China), in 2019 there was a spread of $150 /t on an annualised basis. This is largely as a result of the currently limited trade in SOP – less than a third of global production is currently exported.

Yet much of the new SOP supply under development is heavily export orientated. As the traded SOP market grows, the disparity between different regional price points is likely to narrow. Moreover, higher priced benchmarks will tend to those occupying the lower end of the range.

A number of prospective SOP producers have undeniably overcome major hurdles in attracting funding and starting construction. Yet for those most advanced projects, their greatest obstacles still lie ahead once deliveries to consumers begin. With so much interest in developing new SOP capacity, it will be a challenge for the industry outside China to avoid the oversupply which occurred within the country.

SOP suppliers – both incumbent and prospective – and external lenders will need to be cautious of the risks of oversupply and overinvestment in what remains a niche, and often opaque, industry. CRU’s latest Potassium Sulphates and Potassium Nitrates Market Outlook offers a comprehensive view of SOP supply, demand, trade, costs and pricing, with all metrics forecast to 2025. It also includes further analysis on topics such as project competitiveness, evolving downstream product quality preferences and Chinese export behaviour to fully equip subscribers with the necessary information and knowledge for their decision-making.