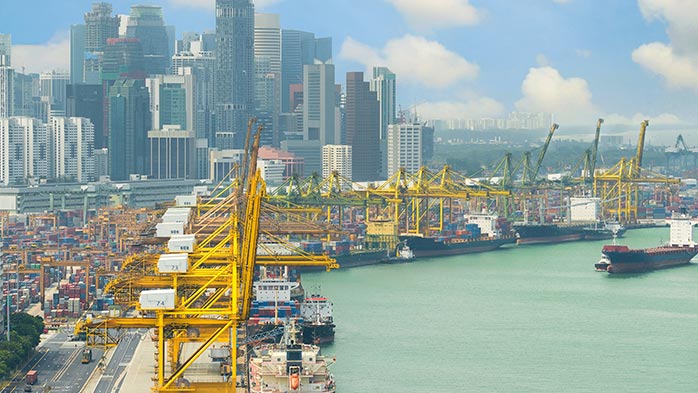 On 15 November, 15 countries signed the Regional Comprehensive Economic Partnership (RCEP). This trade and investment agreement will cover around 30% of the world by both GDP and population. Over time, it should lead to deeper integration of regional supply chains and economies in East and South East Asia, boosting trade and productivity.


RCEP extends and links a number of existing trade agreements into a multi-lateral partnership covering most of the major economies in the Asia-Pacific region. It includes all the members of the Association of South East Asian Nations (ASEAN) (Indonesia, Thailand, Malaysia, Singapore, the Philippines, Vietnam, Myanmar, Cambodia, Laos and Brunei), plus China, Japan, South Korea, Australia, and New Zealand. Notably, it does not currently include India. 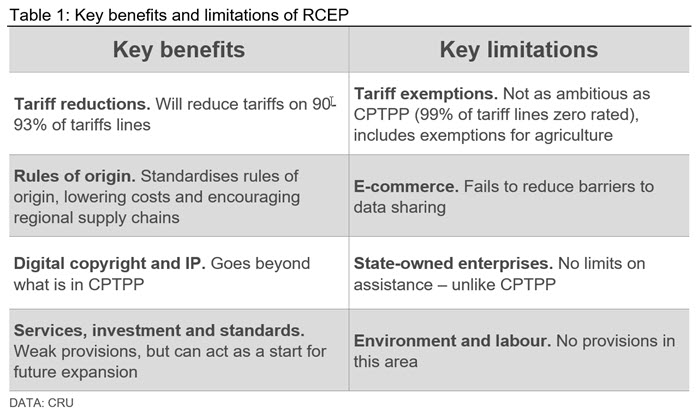 In some areas – tariff reduction, e-commerce, and state-owned enterprises – RCEP is not as ‘deep’ an agreement as the Comprehensive and Progressive Trans-Pacific Partnership (CPTPP), which includes a number of common countries with RCEP (Japan, Australia, New Zealand, Malaysia, Vietnam, Singapore and Brunei). However, RCEP could act as a platform for future agreements that go further.

Although signed, RCEP may take months if not years to come into effect – it must be ratified by at least six ASEAN countries and three non-ASEAN countries before coming into force. However, its long-term impact could be significant for a number of reasons.

RCEP covers a huge – and growing – share of the world economy

The 15 signatory countries to RCEP constitute almost 30% world GDP, a similar share to the US-Mexico-Canada Agreement (USMCA, which replaced NAFTA) and significantly larger than the EU (see Figure 1). What is more, this share is likely to increase over time, as RCEP includes many faster growing economies – such as China, Vietnam and Indonesia. RCEP represents an even larger share of the world’s population – over 30%, compared to around 6% for each of the USMCA and the EU. 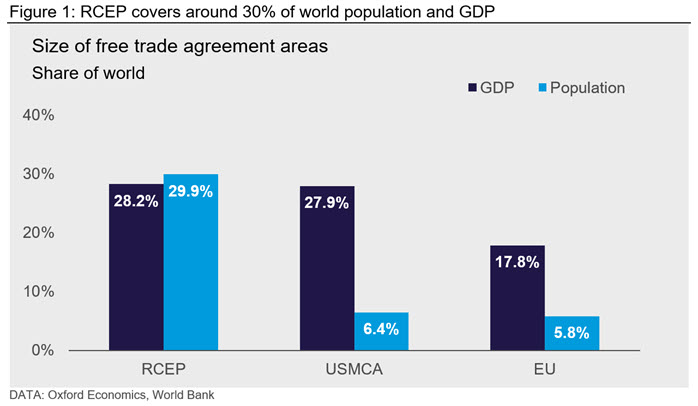 Trend towards regionalisation of trade continues

The last twenty years have seen world trade grow faster than world GDP. As well as the integration of China into the global economy, the growth in intra-regional trade has helped drive this increase in total world trade. Deeper economic integration has led to increasingly complex supply chains of intermediate goods within regional trading blocs, supported by cross-border investment. We have seen this integration within the EU, within North America and within East and South East Asia. Concerns about securing medical supplies during the early stages of the pandemic may also accelerate the trend towards trade regionalisation.

RCEP is an indication that regionalisation of trade remains an important trend. RCEP will promote trade within the bloc – for example, analysis by PIIE suggests RCEP will boost Chinese exports to Japan and South Korea by nearly $100bn by 2030, and to other RCEP countries by over $50bn. Deeper economic integration will also promote productivity and cost efficiencies within the bloc, and so lead to more trade between RCEP and other trading blocs. For example, the same PIIE analysis suggests Chinese exports to non-RCEP countries will also increase by around $100bn by 2030.

As well as boosting its intra- and extra-regional trade, RCEP is a welcome diplomatic and political victory for China, giving it more leverage in future negotiations with the US and the EU. It also signals that China remains outward looking, with the “external circulation” part of the “Dual Circulation” strategy remaining vital.

India had been involved in the RCEP negotiations, but decided against joining. India was concerned that China, by far the largest economy in RCEP, would come to dominate it and use the bloc as a tool to extend Chinese influence.

Although there is a potential route to future membership, this is a missed opportunity for India. The Indian manufacturing sector risks being left out of regional supply chains. Although RCEP is currently much less ambitious in the area of services trade – a specialism of India – it may serve as a platform for future developments in this area. Having a ‘seat at the table’ could have served India’s interests as a service exporter.

Signing of RCEP is a positive for world trade

The signing of RCEP is a positive development for world trade, following several years in which globalisation appeared to be under attack. The extent of its impact will depend on how much it serves as a platform for even greater integration, but it is positive for world output, trade and therefore metals demand. The sheer size of the RCEP trade area will also force other major players in the global economy – the US, the EU and particularly India – to consider how best to interact with the bloc.