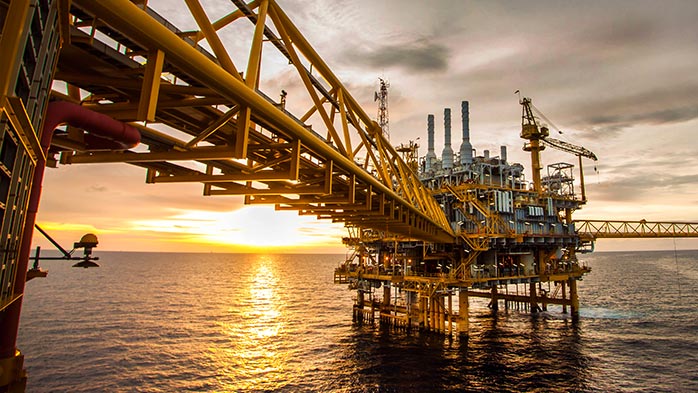 The oil market is currently facing a large degree of uncertainty. Oil prices could feasibly remain around $40/bbl for a significant period of time.


Three key judgements will determine CRU’s oil price forecast for 2020: (I) the extent to which Covid-19 will be successfully contained, which would secure a mild recovery of oil demand; (II) how long can the two antagonists of the oil price war – Saudi Arabia and Russia – hold out; and (III) the resilience of the heavily indebted US shale industry.

Brent crude prices fell by 30% over the weekend – the largest one-day loss since the start of the first gulf war in 1991. When trading opened in Asia on 9 March prices were at $33.90/bbl. Both the Dow Jones and FTSE 100 closed that day around 8% lower. This was accompanied by investor flight to safe-haven assets, causing yields on 10-year US Treasury to go below 1% for the first time ever. 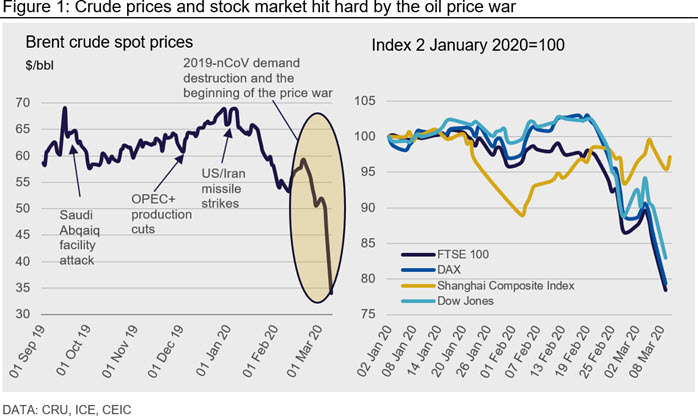 Since the turn of the year global oil demand has been destroyed by the impact of the Covid-19 virus. Supply chain disruptions, travel restrictions, quarantined areas in China and now Europe have resulted in multiple downward revisions in global oil demand. The most recent IEA demand forecast is 99.9Mbbl/day in 2020 – 1Mbbl/day lower than their previous forecast. Oil demand is now expected to contract for the first time since the GFC.

In early March all eyes were on OPEC+ to lower production in line with the lower demand driven by Covid-19. In our February Global Economic Outlook (GEO) we stated “OPEC+ will need to cut supply further if it is to balance the oil market…This is essential if it is to get prices back to the desired range of $60-$65/bbl”. Instead, Russia refused to cut production until the full extent of the demand impacts are known, it has been argued that they wanted to test the fragility of the US shale industry. In response Saudi Arabia decided to start a price war with Russia. From 1 April Saudi Arabia plans to significantly discount their official selling prices (OSP’s) and increase production to as much as 12Mbbl/d– up from an average of 9.8Mbbl/day in 2019 and close to their total production capacity. Other OPEC members will have no option but to also cut the OSP’s to make sure they maintain market share.

What does it mean for Saudi Arabia?
Saudi Arabia is currently trying to diversify its economy, through a series of reforms in an attempt to move away from its reliance on oil. To achieve this, and social stability in the region, ironically, they need a high oil price, around the $80/bbl mark. From a simple cost perspective however, Saudi Arabia can sell oil at ~$20/bbl to meet total productions costs - their breakeven price. But in doing so it would be sacrificing its longer- term economic reform agenda.

What does it mean for Russia?
In 2019, Russia produced on average 11.5Mbbl/day. Their breakeven price is ~$40/bbl and much like Saudi Arabia its economic budget is driven by oil prices. Because it is so reliant on oil exports for economic growth – its exchange rate is closely tied to oil prices. The Russian rouble has depreciated by 20% since the turn of the year driven by the oil demand destruction from Covid-19 and now by the new oil price war. To avoid large currency fluctuations, any revenue made from oil prices above $40/bbl are directed to the National Wealth Fund.

Compared with the last oil crisis in 2014 the rouble is significantly weaker against the dollar, making a drop like the one experienced between H2 2014 and H1 2016 unlikely. Moreover, the recent accumulation of reserves means that Russia has room to intervene in currency markets to stabilize the rouble. Russia’s finance ministry said on 9 March that it would draw from their $150bn national wealth fund to boost budgetary spending, while oil prices remained low. 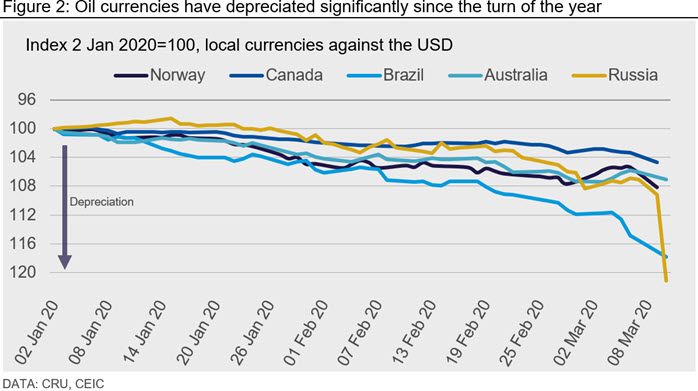 The downward pressure on an oil currency caused by a fall in oil prices helps boost the economies’ non-oil exports, however it is unlikely to fully offset the revenue loss from lower oil prices. The bigger the share of the country’s oil-exports, the more muted this offset will be. Against this backdrop, the Norwegian and Russian economies can be expected to suffer more than the Canadian economy, as the latter’s total exports are more diversified. Moreover, a weaker currency means imports become more expensive. This pushes up on inflation and hurts households’ purchasing power.

What does it mean for the US?
US crude production has been growing since the shale boom of 2014. The EIA forecasts US crude oil production to average 13.2Mbbl/day in 2020. While production has boomed, so has the debt levels of shale producing companies. US shale needs crude oil price to be ~$50/bbl crude price to break even. Companies that have not hedged their revenue against lower oil prices may see investors leave and their companies ultimately go out of business. Those that have hedged their output will be safe for now but if the price war continues for a prolonged period, they could follow suit. Some US shale companies have seen their share prices drop by more than a third following the decline in oil prices. Speculation is that this is Russia’s aim – to squeeze the US shale companies and push the marginal suppliers to shut down.

The battle of attrition begins
Saudi Arabia is best positioned to come out the winner of this war, simply because their breakeven price is much lower than the rest of the world. And while short term this might be tolerable given their large foreign exchange reserves, in the long-term it would mean sacrificing some economic reform. Russia could hold out if their national wealth fund is deep enough, and the US could maintain its recently acquired oil market share if the majority have successfully hedged their output and/or the government steps in to help them (possibly in the form of targeted fiscal stimulus or WTI contract purchases).

A fall in oil prices greatly benefits energy intensive producers such as aluminium, steel and nitrogen fertilisers at a cost level. Below we can see the direct effect of an annual average Brent Crude price scenario at $30/bbl on the global aluminium smelter cost curve. As energy makes up a large proportion of primary aluminium costs, some producers would experience a cost saving of >$100 /tonne of product. 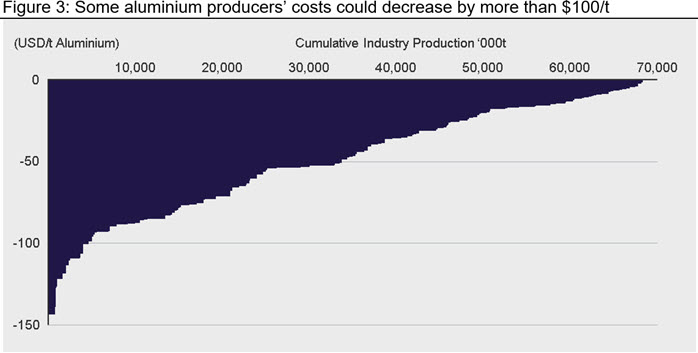 Where might oil prices settle by the end of this year
The current situation is of course incredibly uncertain. At CRU we see three key drivers determining where oil prices will average in 2020. I) The extent at which the virus is contained, as well as how the economic measures implemented improve economic growth in H2 and as a result oil demand. II) The extent to which Russia and Saudi Arabia can absorb the impact of low oil prices on their economies. III) How US shale will be able to respond to low oil prices given the high debt levels in the industry. The table below highlights variations to these key drivers and what they could do to oil prices throughout 2020. 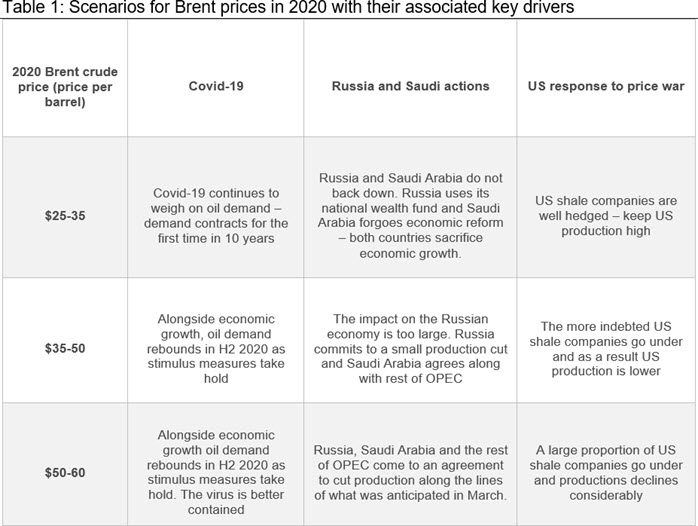 For more detail on the scenarios outlined in this insight please get in touch. The oil market will no doubt evolve rapidly in the coming days and weeks and we continue to monitor the impact on the commodity markets closely. We will revise our Brent crude forecast to reflect these latest developments in our March Global Economic Outlook.