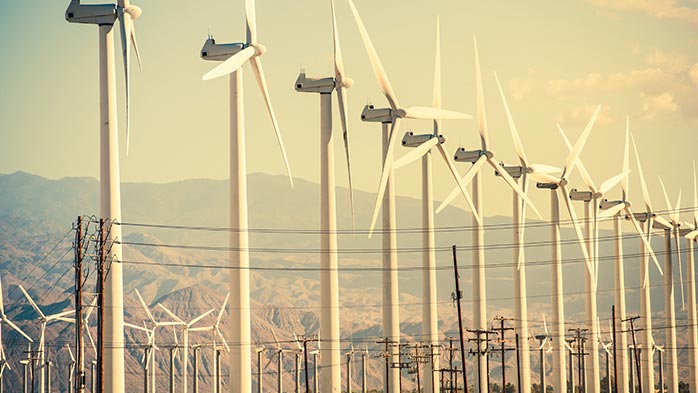 The transition to a green economy represents a major opportunity for rare earths demand in the coming decades, with so-called ‘magnet rare earths’ – especially neodymium (Nd) and praseodymium (Pr) – found in a wide range of green applications: from offshore wind turbines, to electric vehicle powertrains.


But as a bundle of some seventeen rare earths naturally occur together in fairly fixed proportions within their orebodies, miners will inevitably create surging oversupply of several other elements in their race to ratchet up production of Nd and Pr. Careful consideration must therefore be given to the varying demand prospects of each of these elements when evaluating the economic feasibility of each mining project, as not all rare earths are likely to benefit from the shift to a sustainable world economy.

An introduction to the ‘basket problem’

Imagine you are the strategic manager of a hypothetical mining operation exploiting an orebody that comprises of two fictional minerals – say, phostlite and cavorite – in equal quantities. The mine is the only one of its kind in the world and supplies the entire world’s demand for both minerals. Then, by some miracle, a new type of commercial fusion technology is invented which relies heavily on cavorite, massively increasing demand for the element; but by contrast, demand for phostlite remains constant.

As a miner you cannot preferentially mine cavorite – the two minerals are fused together within the orebody. So, do you choose to increase mining throughput in order to meet demand for cavorite, while simultaneously pushing the market for phostlite into massive oversupply and crashing the price? Or do you keep mining output steady to preserve prices for phostlite, thereby creating a huge deficit of cavorite? How do you balance these two effects?

This is the essence of the “basket problem”, an issue which has plagued the rare earth mining sector in recent years. The rare earth elements (REE) consist of the 15 lanthanide elements, with atomic numbers 57 to 71, with the addition of yttrium and in some cases scandium, for a grand total of 17 elements. They are considered as a group because they are found, mined and processed together, up to the stage of a rare earth oxide (REO) concentrate. Then, due to their similar physical and chemical properties, they must be painstakingly and expensively separated via multi-stage solvent extraction into the individual elements for their different end uses. 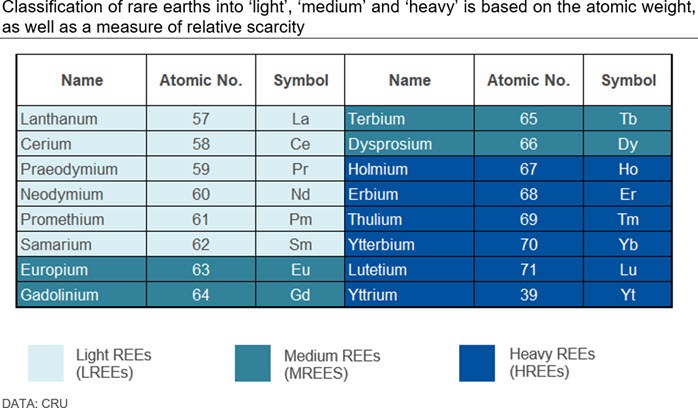 Different rare earth elements are used in a wide range of applications across almost every major industrial and technological sector. Because of their varied end use profiles, the individual rare earth elements can have very differing demand growth rates. However, they are nonetheless supplied in fixed proportions dependent on the composition of the main orebodies, which can cause strong fluctuations in market balance for different elements.

While there is some variation from mine to mine in terms of which of the 17 rare earths are produced and in what quantities, most orebodies comprise of a very large proportion (60-75% by final product volume) of “industrial rare earths” – specifically cerium and lanthanum (Ce and La); followed by a moderate proportion (typically 15-30%, with exceptions) of “magnetic rare earths” (Nd and Pr); and then a small fraction of “medium/heavy rare earths” such as dysprosium, samarium, europium, terbium, and so on (although this can be much higher in some exotic orebodies and for specific elements, such as yttrium).

When discussing the economic feasibility of projects, most focus is put on the markets for cerium, lanthanum, neodymium and praseodymium, as these elements make up ~94% of the production volume and 90% of the revenue of an “average” orebody. 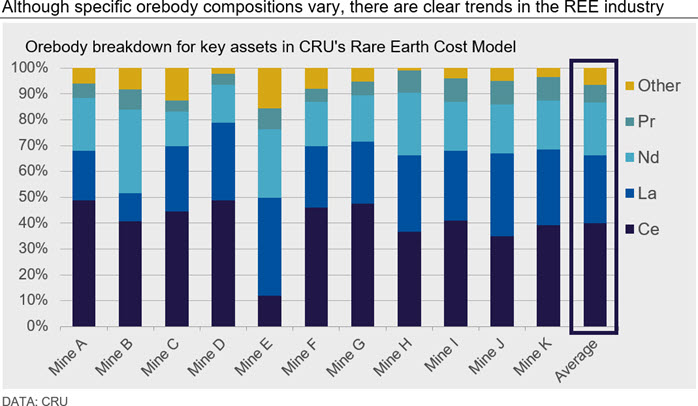 Although the balance problem impacts the entire suite of rare earths to some degree, given their importance to the product mix and ultimately revenue of most assets, nowhere is it more crucial than in the parallel markets for Ce/La and Nd/Pr. These two pairs of elements are driven by very different markets: the former “industrial” REEs are widely used in polishing powders, steelmaking, alloy manufacture and as a support bed for catalysts; conversely, the latter fall more naturally into the “tech metals” camp, given their usage in high-powered permanent magnets (typically “NdFeB”) that are found in wind turbines, electric vehicles (EVs), portable electronics and many other applications. Consequently, demand growth for these elements has diverged in recent years: CRU estimates that NdFeB magnet demand has grown at a 2012-2020 CAGR of 5.6% in response to widespread installation of wind turbines and prodigious growth in EV sales; whereas for the same period, Ce/La demand growth was only 1.1%. 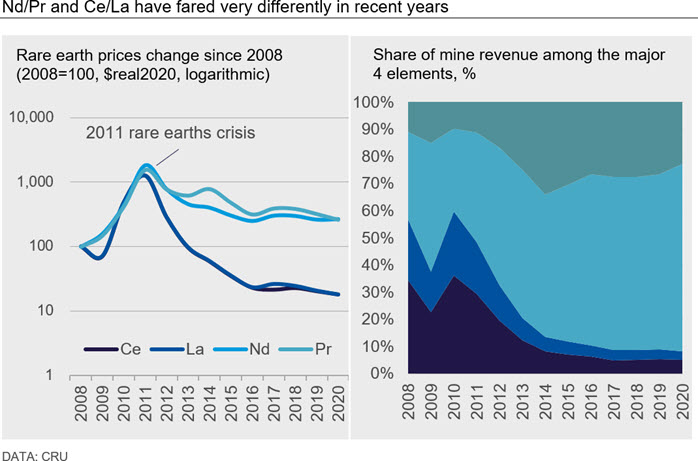 This has had a marked impact on the prices and revenue splits for these four elements, as shown above. Following on from the 2010 Senkaku Boat Collision Incident and the ensuing rare earths shortage in 2011, Nd and Pr prices have settled at a level around 250-300% higher in real terms than they were in 2008; conversely, Ce and La prices have seen a sharp decline, falling to around 20% of their 2008 levels. This has resulted in a large change to the revenue breakdowns of REE mining operations. La and Ce used to make up around half of total revenue from mining operations, but this has since fallen to just 10% in recent years.

The ‘basket problem’ will get harder for miners to manage

Looking ahead, these trends are expected to exacerbate, and CRU anticipates that the wildly different growth prospects for Ce/La versus Nd/Pr will cause the basket problem to intensify over the coming decades. Our demand forecast for the former is driven by a wide range of factors that includes our long-term steelmaking and alloy forecasts, as well long-term regional GDP growth and industrial production estimates from our internal economics team. When factoring in all of these drivers, we expect the market for cerium and lanthanum to grow in size by approximately 50% between 2020 and 2038.

When forecasting Nd/Pr, the main two markets of importance are the wind energy and EV sectors. While these are clearly enormous opportunities for growth, consideration must be given to varying NdFeB magnet intensities by end use, ongoing efforts at thrifting in magnet formulations, and the potential for NdFeB recycling to contribute more supply in the future. Nevertheless, with all of these effects factored in, CRU estimates that the market for Nd/Pr will grow in size by approximately 350% between 2020 and 2038 – meaning growth of roughly seven times that of Ce/La. 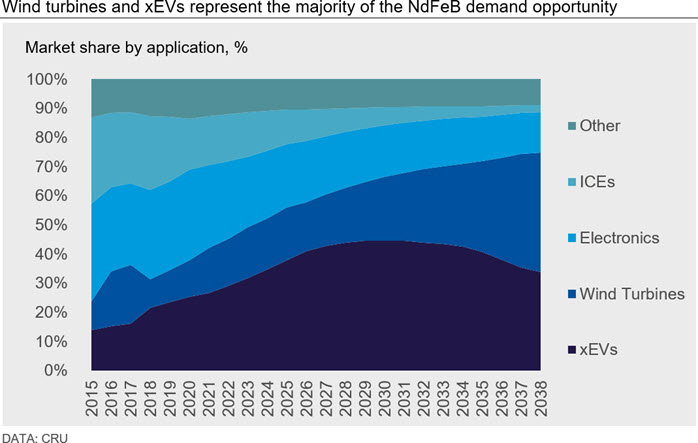 Several key observations can be made from this disparity in demand prospects:

Rare earths remain important strategic elements, as well as being crucial to the transition to a greener global economy. But although we expect demand for most REEs to grow in the future, the inflexibility of their supply (as illustrated by the basket problem) means that the individual elemental markets will not all fare the same in the coming years. When evaluating the economic feasibility of REE projects, miners and investors alike cannot simply assume that basket prices and achievable margins will follow historic trends, and need to consider the wider market structure. In other commodity groupings – oil and gas, steelmaking raw materials, base metals, battery metals, and so on – there is some degree of correlation in terms of pricing and demand; but while these groups may follow the familiar adage that “a rising tide lifts all boats”, the very opposite is likely to be the case for rare earths.

Talk to CRU – our experts are waiting to hear from you

When it comes to rare earths, CRU is one of the world’s leading research and consultancy firms in the market. We have dedicated a wealth of resources to analysing and tracking these markets in recent years, including the development of long-term automotive and renewable demand modelling, supply cost modelling and price forecasting across a range of rare earth elements. We have worked closely with a wide range of industry participants that includes established miners, aspiring projects, investors and regulators in order to improve market understanding of these elements and in turn refine our own knowledge and modelling capabilities. In addition to this, our dedicated teams of analysts and consultants in Shanghai and Beijing give us strong insight into the rare earths market which is unavailable elsewhere. If you would like to discuss any of the issues raised within this Insight with a CRU Analyst, contact us via the button below.

Explore this topic with CRU
Want to read more? Register to continue reading and gain access to all CRU Insights
Rare Earths
Top 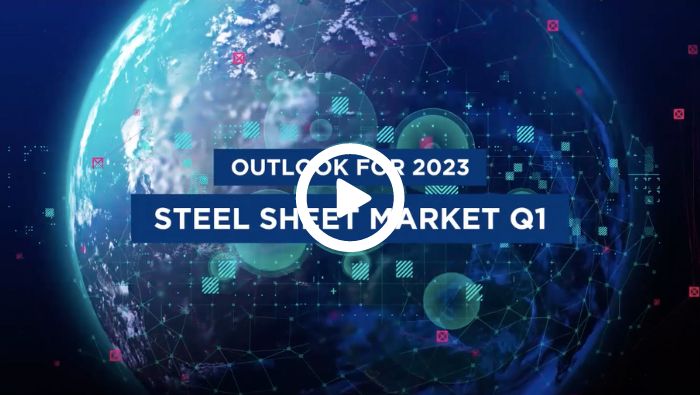 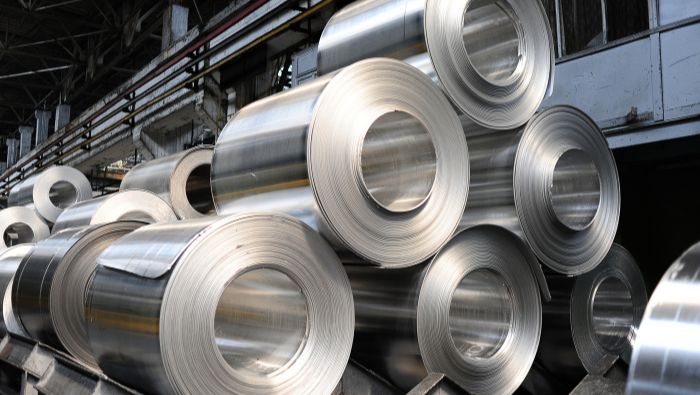