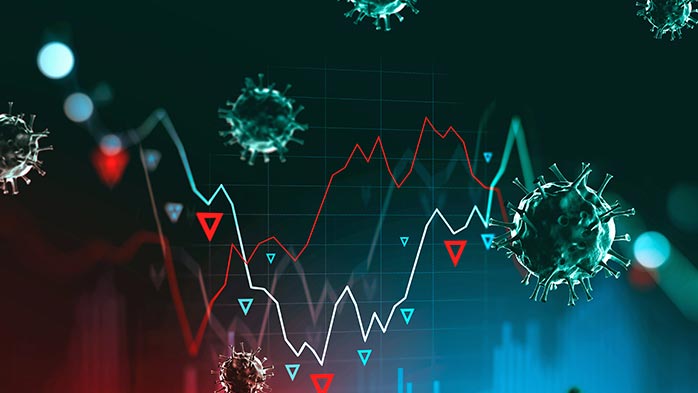 In the short-run, Covid-19 caused a huge blow to global economic activity. In this insight we set out our long-term outlook by comparing the pace at which different regions recover from the Covid-19 downturn. Asian economies are projected to progress the most in the next 30 years, while European economies decline in relative size. Covid-19 delays India’s journey to becoming the third largest economy, but it does not hold back Indonesia.

How Covid-19 alters the race

Producing long-run forecasts out to 2050 allows for interesting cross-country comparisons. Specifically, looking at how the size of various economies evolves over time gives an indication of who the “growth winners” in the next decades will be.

China overtakes the USA as the world’s largest economy in 2031, unchanged from last year’s predictions. Although Covid-19 has detracted more from US growth than from China, the difference in growth is not big enough to substantially shorten the closing speed. 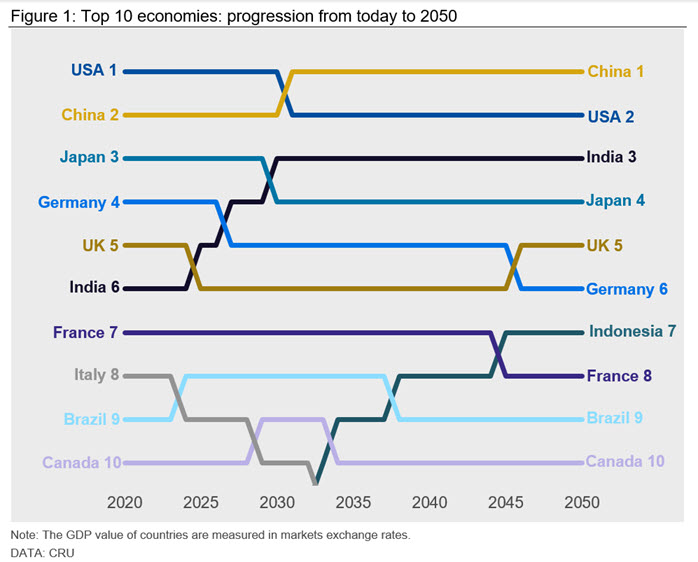 India becomes the third largest economy in the world in 2030, up from its current position of six. In doing so, India surpasses the UK, Germany and Japan. While this will undoubtedly be a big achievement, it is worth noting that India’s path to third largest economy has been delayed by two years because of the Covid-19 downturn.

Indonesia is the only “new entrant” in the top ten rankings by 2050. The main drivers of its strong growth performance are favourable population dynamics and healthy productivity gains. In 2020 Indonesia is the 15th largest economy in the world, in 2033 it enters the “top ten club” by displacing Italy and by 2045 it reaches seventh place, overtaking Canada, Brazil and France.

Covid-19 damage in the short and long runs

Covid-19 has caused an unprecedented economic downturn in virtually every country of the world. However, some have been more affected than others. Similarly, how long countries take to recover varies significantly. Figure 2 shows that in the short-term Covid-19 has led to a 2% loss of GDP in Western Europe and North America. It is smaller for China but much larger for India and Indonesia, similar to the IMF’s latest predictions. This scarring dissipates to less than 0.5% by 2050 for most economies suggesting small long-term scarring apart from in Brazil and Europe.

In the short-run, the pattern that is emerging is one in which advanced economies (AE) recover faster than emerging ones (EM) – with the notable exception of China. Indeed, the average deviation from the previous GDP levels forecast up to 2025 is larger for India, Indonesia, and Brazil than it is for North America and Western Europe. In our view, this is because AE governments were more willing to use the policy tools at their disposal than their EM counterparts. In turn, this is likely due to the fact that many EM policymakers feared that excessive fiscal/monetary stimulus could undermine their access to capital markets. 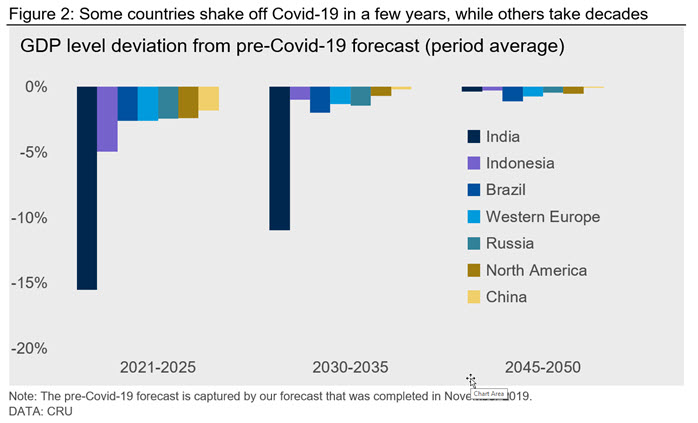 We believe the impact of Covid-19 on economies by 2050 will be very modest. The Indian outlook is a good example of the thought process we went through to determine the effect of Covid-19 at different stages of the forecast horizon. The depth of the 2020 downturn and its contribution to amplifying some pre-existing hurdles to growth mean that we now think India will take longer to recover. However, our longer-run view has not changed. What this means is that compared to last year’s forecasts, a bigger chunk of India’s growth will come in the last 10-15 years to 2050.

Employment and productivity are the key growth drivers

Beyond the next five years, it is not possible to predict the timing or duration of economic cycles, largely because cycles are often caused by events that are, inherently, unpredictable. Instead, long-term forecasts focus on the structural elements that determine the underlying trend level of economic growth. Ultimately, these are employment and productivity.

Based on these drivers India and Indonesia have the highest demographic dividend between 2025 and 2050, followed by the US. In all of these three economies population growth is accompanied by an increasing participation rate (this latter dynamic is less potent for the US). In China the opposite is true: an ageing population means that employment levels will be falling. This in turn acts as a drag on Chinese future economic growth.

The rate of productivity growth reflects the level of technological advancement. This will be determined by a variety of factors such as an economy’s potential for further urbanisation, the prominence of the service sector, and the sophistication of the manufacturing industry. Broadly speaking, countries with a low level of productivity have greater scope for rapid growth as they catch up with more advanced countries, adopting their technology and increasing their capital stock.

Figure 3 shows that we think the force for stronger economic growth via productivity gains will be higher in countries like India and Indonesia. However, such advancement is not guaranteed, and depends on emerging economies having the right institutional framework to support it.

Covid-19 has created a large dent in short-term economic activity. It has disrupted employment and reduced average corporate investment. That means that even five years out, economic activity is likely to be lower than it otherwise would have been, absent Covid-19. Over time, those scars start to heal, but the pace of recovery varies by region. Asian economies are projected to progress the most in the next 30 years, while European economies decline in relative size. Covid-19 delays India’s journey to becoming the third largest economy, but it does not hold back Indonesia.