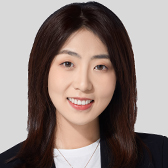 In recent weeks, China has been experiencing the worst power shortages in decades. Various industries in twenty provinces have been affected and even residential customers had power cuts in the extreme cases.


Increasing electricity demand, coal supply shortage, and the decarbonisation drive are the three primary causes of the power shortage. What’s the impact of higher electricity prices in China? When will domestic coal prices in China decline? And for how long will power cuts continue?

Why are there power cuts in China?

While shortage of coal has been the main reason behind the recent power cuts in China, it has not been the only one. Negative margins of coal power plants due to caps on electricity prices and stricter implementation of ‘Dual Control policy’ by provincial governments have also contributed to severe power cuts across the country.

At the same time, China’s coal output has not increased enough to meet rapidly rising demand. From January to August, total raw coal production grew by only 4.4% y/y.

During the 13th Five-Year Plan (FYP), China closed over 5,000 coal mines with a total capacity of 1 billion tons. Many of these mines were undocumented and unlicensed coal mines, which previously used to increase production in response to high prices and thus helped to balance the market. Coal production in China has been slower to respond due to the closure of those mines, as well as stricter environmental and safety regulations.

In May this year, the State Council started releasing coal reserves to increase the inventory at power plants. The National Development and Reform Commission (NDRC) has been taking various steps to encourage coal production growth since Q2 this year; including allowing previously closed capacities to restart and by encouraging expansions at existing mines in Inner Mongolia, Shanxi, and Shaanxi provinces.

These three major coal-producing provinces account for 70% of total coal production in China. In Inner Mongolia, a total of 138 Mt of additional annual capacity has restarted, according to the provincial energy bureau, while 63 Mt of annual capacity has been added in Shanxi, accounting for 11% and 7% of the provincial coal production, respectively. Nevertheless, increased output from these mines has so far failed to reduce spot prices.

To ensure the residential power supply and heating, coal mines are now required to sign long-term contracts with coal-fired power plants to cover 100% of their coal demand. As a result, this extra production output has been going directly to the utilities under contracts and very little has been available for the spot market.

Since July, coal stocks at Bohai Rim Ports, the major coal port hub in China, started to decrease dramatically to multi-year lows. While domestic raw coal production in China increased by 7% m/m in August and has continued to increase in September and October, it has not been enough to meet demand from buyers looking to restock ahead of the winter months.

Demand for domestic coal in China was further supported by buyers who normally purchase in the seaborne markets but have recently been unable to secure enough due to supply constraints from key exporters, such as Indonesia, Russia and South Africa, as well as due to port bottlenecks.

Additionally, many buyers were expecting prices to fall in September and therefore delayed their purchases in preceding weeks, but when prices continued to rise in September, more buyers came to the market as they could no longer delay restocking, thus leading to further price increases.

As a result, Chinese domestic thermal coal prices have been skyrocketing through September and October, reaching RMB2,000 /t, FOB Qinhuangdao for 5,500 kcal/kg coal by the middle of October. 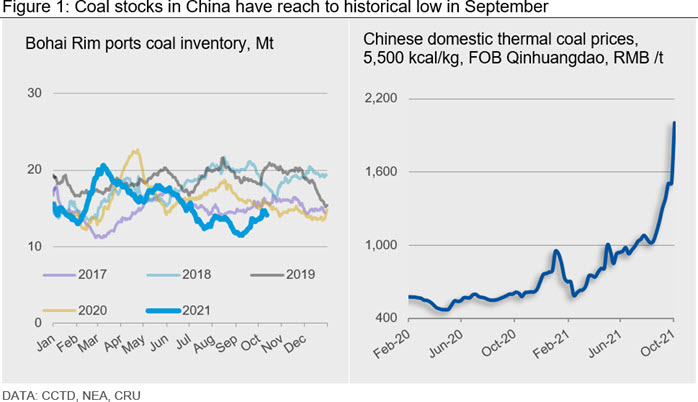 While coal prices have risen to historical highs this year, electricity prices in China have been capped, resulting in large losses for some coal power plants and thus limiting further electricity generation growth.

Lack of coal and insufficient power generation have resulted in provinces restricting power supply from July. Starting in Yunnan province, China’s main base metals producer, the provincial government has required the smelters to reduce 25% of the electricity consumption and increase production during the night. In September, the power restriction policies spread to twenty provinces across the country, including key industrial production areas such as Guangdong and Jiangsu provinces.

In addition to shortage of coal, ‘Dual-Control policy’ from the NDRC has been another significant factor behind power cuts. As part of China’s long-term decarbonisation target, this policy has imposed quantitative reduction targets on both total energy consumption and energy intensity per unit of GDP for different provinces and applies oversight and checks over the performance of local governments at all levels.

While this policy has been in place for several years, regulation has become much stricter recently with China announcing its decarbonisation goals. In August, NDRC started pressuring provinces that have been lagging in meeting their annual target for reducing energy intensity and total energy consumption. Nine provinces, shown in the table below, received first-level warning following a review of 2021 H1, and thus they have had to reduce electricity consumption in the energy-intensive sectors.

On 8 October, NDRC lifted the 10% cap on electricity price increases for energy-intensive industries, shifting the costs from power plants to the industry. This will result in the improved profitability of coal power plants and will lead to them increasing electricity generation if they have sufficient supply of coal. At the same time, higher electricity prices will lead to rising costs for the energy intensive industries in China and could reduce their cost competitiveness.

The production and consumption of coal is of great concern under net-zero emissions goals. China is currently facing a dilemma of balancing its ambitious climate goals with its rising energy needs. Lifting the cap on electricity prices sends a signal that China is unlikely to compromise on achieving its climate goals. In the short-term, higher electricity price aims to alleviate the losses from coal power plants, and in the long-term, the government is pushing all industries to purchase electricity at market prices and raising on-grid electricity price for renewable energy sources.

Additionally, China continues with its strong rollout of renewables capacity. At the 15th UN Biodiversity Conference (COP15) in Kunming in China, President Xi Jinping announced the start of construction of the first phase a massive renewables energy project. That phase will comprise 100 GW of solar and wind capacity.

As China enters winter heating season and coal inventories at both ports and power plants are at low levels, demand for coal will remain high in the coming months. At the same time, the seaborne market has been very tight due to strong demand for coal in the rest of the world and insufficient growth in domestic production. As a result, we expect China's domestic coal market to remain tight through the winter with thermal coal prices remaining at very high levels until the end of the heating season in March. Following that, we expect thermal coal prices to fall sharply in 2022 Q2.

Firstly, demand slows down seasonally in the spring due to milder weather. Secondly, we forecast a substantial slowdown in total thermal coal demand growth in 2022 to just 0.5% from 7.2% in 2021. This will be primarily driven by the deceleration in the Chinese economic activity and thus smaller growth in electricity consumption, which will grow by 5% next year compared to 10% in 2021.

Thirdly, the recent drive by the government to increase domestic coal production is expected to lead to 3% growth in China’s coal output next year.

Overall, we forecast total thermal coal demand to increase by 16 Mt next year, while production is expected to rise by 99 Mt y/y. We expect this to lead to an improvement in market balance in China and thus to substantially lower domestic thermal coal prices. 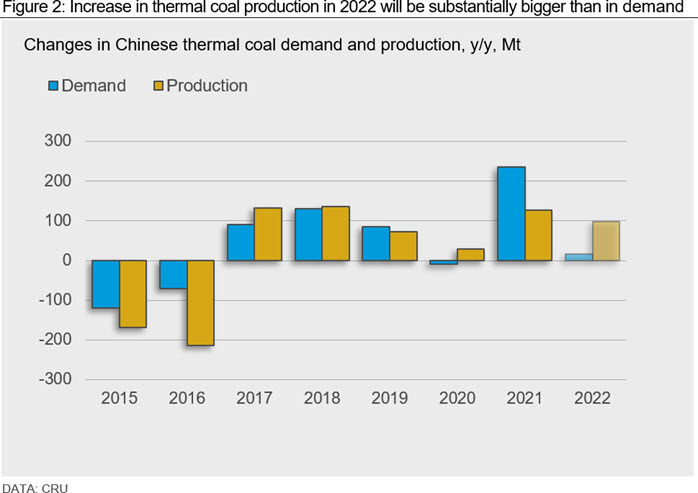 Power cuts will continue through to 2022 Q1

Because thermal coal market is expected to remain very tight in China during winter months, it is likely that severe power cuts will continue through 2021 Q4 and substantial part of 2022 Q1. The extent of power cuts in early-2022 will also depend on NDRC’s review of provincial energy intensity reduction during 2021 H1. If provinces are substantially lagging behind their targets again, this could cause them to continue with power rationing for energy intensive industries.

In the long-term, while the situation with thermal coal supply is expected to improve from next year, we believe power cuts in China are likely to continue to a certain degree because of ‘Dual Control policy’. With improved coal supply, power cuts in the longer-term will be less severe as they have been in past weeks but the attempts by provincial governments to meet their ‘Dual Control policy’ targets could lead to power cuts occurring on an ongoing basis.