Although Chinese factory activity and retail sales were surprisingly robust in October as the power crunch issue eased, further weakness in the property sector underscored concerns for the economic outlook for China.


Retail sales and industrial production rose by 4.9% and 3.5% y/y, respectively, in October, while fixed asset investment grew by 6.1% y/y in the first ten months of 2021. We expect a moderate improvement of credit to both developers and households, as well as further marginal easing by the central bank and local government. (Green) infrastructure investments are expected to play an important role in supporting economic stability in 2022.

Fixed asset investment (FAI) in October contracted by 5.1% y/y, down from a 3.2% fall in September to post a growth of 6.1% y/y in the January – October period in 2021. The slowdown is mainly as property investment continued suffering from tightened financing for developers amid the property market deleveraging that began with ‘houses for living in, not speculation’ campaign in 2017. FAI in real estate rebounded significantly by 15% in 2021 H1 as developers accumulated funds by taking advantage of strong sales growth and running up accounts payable with contractors. However, the Evergrande liquidity crisis and China’s insistence on deleveraging quickly tamed the investment in real estate market in H2 (top of Figure 1). 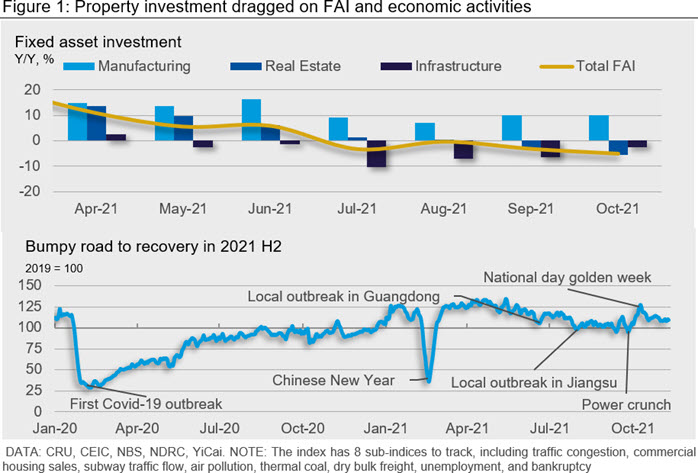 Industrial production (IP) has expanded by 3.5% y/y in October, up from 3.1% in September. IP had cooled in September amid widespread power shortages, though the energy crisis seems to have eased by the latter half of October amid a variety of government measures to boost coal production and lower prices. Power production ramped up by 3% y/y in October. Factory demand was consistently buoyed by robust overseas demand: China reported earlier this month that exports jumped 27% y/y in October and manufacturing production recovered to 2.5% y/y in October. Though automotive production remained sluggish relative to last year (declining by 8.8% y/y in October), it has greatly improved on recent months as Southeast Asian countries recover from the Delta outbreak, easing supply chain disruption. Strong government promotion of new energy vehicles (NEV) has also stimulated demand for NEVs (Figure 2).

Buyers wait for home prices to bottom out and clear policy

The average house price across 70 major cities dropped 0.3% m/m in October, down from 0.08% decline in September and the biggest monthly drop since 2015. Fifty-two out of the seventy cities saw new homes prices slide. Following the historical pattern in 2015, we expect this round of home price correction to persist through 2022 Q2 due to bearish market sentiment and the looming introduction of a property tax (LHS of Figure 3).

As we discussed last month (available to CRU subscribers), strict regulations on property developers’ financing and mortgage tightening continued to weigh on the real estate sector. The collapse of market confidence in major developers such as Evergrande, coupled with the uncertainties about the timeline of the property tax, caused more people to hold off on buying houses, hence cutting developers’ main source of funding for new projects. Faltering sales and tightening financial constraints are forcing property developers to scale back all construction activities in October: sales of properties fell by 21.7% y/y in floor space terms, starts of properties contracted for the seventh consecutive month, falling by 33.1% y/y and completions of properties declined by 20.6% y/y (RHS of Figure 3).

In a sign of a growing pivot on the ‘three red lines’ policy, in the past two months, central regulators started to fine-tune the country’s property policies. They have convened meetings with property developers, implemented a soft loosening of mortgage loans for homebuyers, and offered development loans for qualified developers. Notwithstanding marginal relaxation on mortgage lending and property-development loans, we expect the outlook for real estate to get worse in Q4 and in 2022 as developers grapple with poor housing demand and ongoing efforts to deleverage. 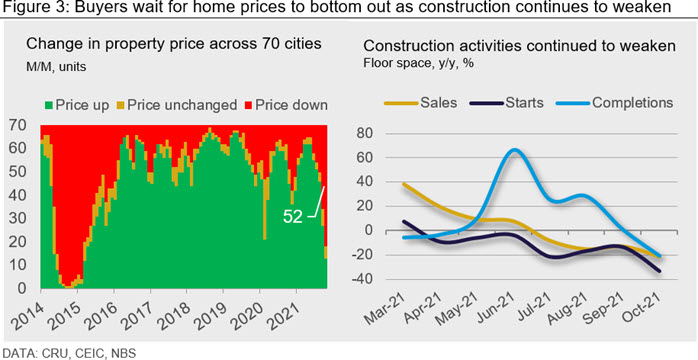 In the following months, China’s central bank (PBoC) could become more accommodative towards supporting economic growth, as new data showed that mortgage lending and the level of local government bonds issued rose last month. Total social financing, an indicator that measures the country’s overall funding for the real economy, was RMB 1.59 tn in October – growing by 10% y/y. Meanwhile, the growth of M2, the broad measure of money supply, grew 8.7% y/y in October, 0.4% higher than a month earlier. Looking ahead, we expect credit growth to stabilise at the current level of 10-10.5% to broadly match nominal GDP growth. PBoC is also expected to use a variety of tools to ensure reasonably ample liquidity, while improving its structural monetary policies to help key areas and weak links and to ensure that growth occurs in a reasonable range.

In addition, PBoC will maintain liquidity in the market in support of potentially more issuances of special-purpose bonds, which are instruments used by local governments to raise funds, particularly for construction projects. The Ministry of Finance latest data showed that, in October, local government bond issuance was RMB 369.7 bn higher than it had been a year prior – reaching RMB 6.49 tn (Figure 4).

Looking ahead, we also expect more loosening as the central bank announced a new loan for qualified carbon reduction projects, offering a one-year lending facility at 1.75% rate to subsidise funding costs for low-carbon emission projects. So far, Chinese lenders have handed out RMB18.9 tn of ‘green loans’ by end of September, according to PBoC’s data (LHS of Figure 5).

To end the current turmoil in Chinese property market, we expect that more fine-tuning social reforms need to be done at local government level: 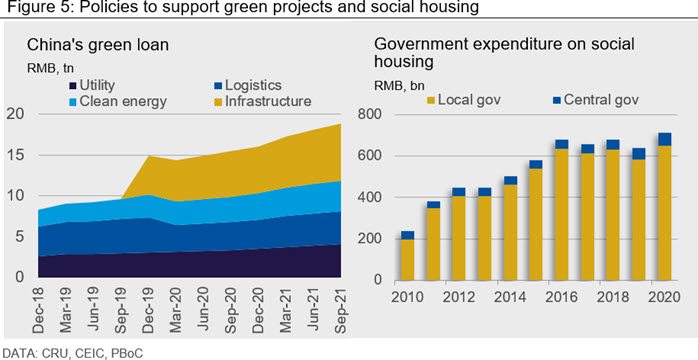