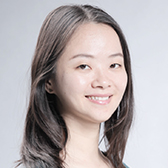 The city of Tangshan, two hours east of Beijing, plays an extremely important role in the global steel market. It is the largest steelmaking hub in the world and accounts for 14% of China’s crude steel production, equal to 8% of global production.


In recent years, we have seen frequent measures taken to curb the city’s crude steel production, often with the aim to reduce pollution both locally and in neighbouring cities.

Such measures will have a significant impact on the market for steel and raw materials, both in China and in other parts of the world. In order to better understand how the markets are impacted, we need to take a closer look at how the steel industry in Tangshan is structured.

Tangshan – a long history of steelmaking

Tangshan (唐山) is located in the eastern parts of Hebei province, ~150 km east of Beijing. It was one of the first industrialised cities in the country and its location holds many strategic advantages that helped to build the city’s heavy industries. Tangshan is located close to large population centres and is logistically well-connected to railways and several large ports, including Tianjin. In addition, there is a large number of iron ore and coal mines nearby, although the region has become increasingly dependent on raw materials sourced from other places. Iron ore is typically imported through the two large ports Caofeidian and Jingtang whereas metallurgical coal and coke are often brought over by truck from Shanxi province, China’s largest coal-producing province. Hebei still produces large amounts of iron ore and coal, but the supply has not kept up with rising demand and today serves as a complement to the material brought into the province. 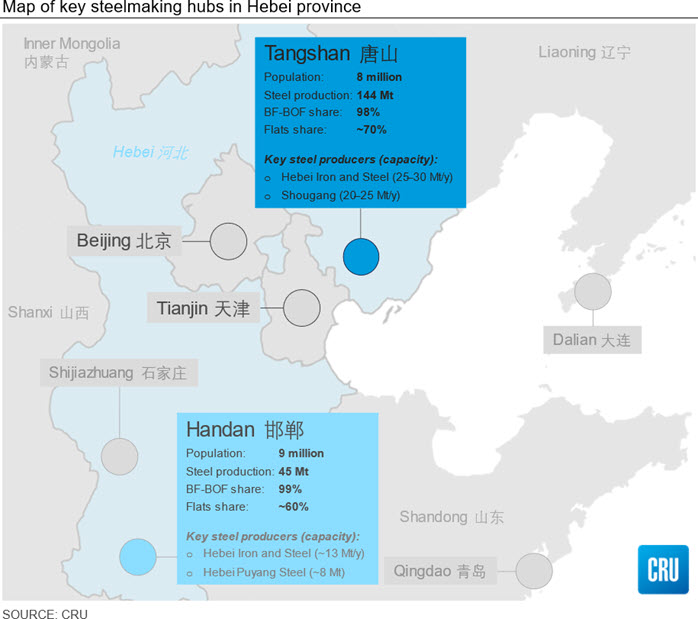 In 2020, Tangshan recorded 144 Mt of crude steel production according to China’s National Bureau of Statistics (NBS). This accounts for 57% of the province’s output and the city alone produced far more steel than both India and Japan, as well as the combined output of USA, Germany and Brazil.

One thing that stands out about the city is that flat products make up a very high proportion of total steel output. Although it is difficult to estimate the exact proportion, our sources in the city suggest that flat products make up nearly 70% of the city’s total steel output, much higher than the 40% average for China as a whole. It also means that, while Tangshan accounts for 14% of China’s total crude steel production, the city’s share of China’s flats production is even higher at 25%. In other words, the flats market will be disproportionally affected when the city takes measures to reduce steel output. This partly explains why HRC margins are much higher than for other steel products in China. 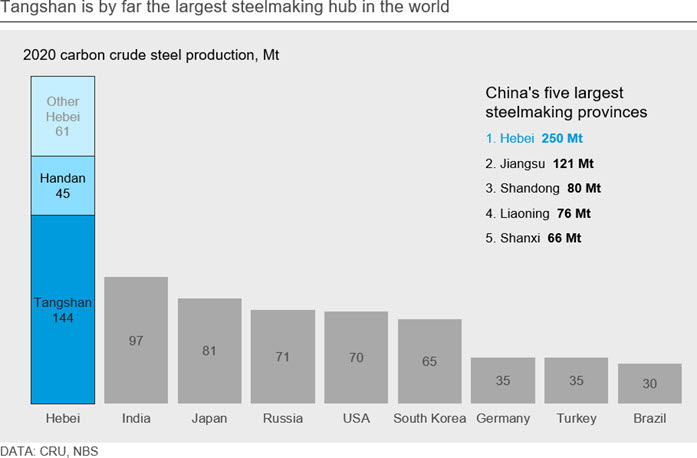 Who are the major steel producers in Tangshan?

Tangshan is home to many large steelmakers and we estimate that there are 35 mills actively producing steel in the city. There is currently very little EAF production taking place in Tangshan, our sources indicate that there is around 4 Mt/y of total EAF capacity. This means that almost all the steel is produced through the BF-BOF process.

About 25–30 Mt/y of the city’s crude steel capacity belongs to the Hebei Iron and Steel Group (HBIS), which is a merger of many steel mills primarily in Hebei, including Tangshan Iron and Steel and Handan Steel Group. Another important steelmaker is Shougang, formerly known as Capital Steel. The company is originally from Beijing, but shut its production facilities in the capital prior to the 2008 Olympic Games and instead built new facilities in Tangshan, other northern provinces and Guizhou in the south. CRU estimates that Shougang’s facilities in Tangshan amount to 20–25 Mt/y of crude steel capacity.

Besides HBIS and Shougang, a considerable number of mills are privately owned, among which Jinxi Group, Hebei Donghai Special Steel and Jiujiang Wire are the largest ones with each having over 5 Mt/y of capacity and play an important role in the city’s steel industry.

What about raw materials supply?

CRU estimates that Tangshan produced just over 140 Mt of hot metal in 2020, slightly higher than official data which recorded 133 Mt of output. This means the city consumed ~210 Mt of iron ore and ~70 Mt of coke (produced from ~95 Mt of coking coal) during 2020.

Our analysis shows that the city is highly dependent on Australian iron ore. The country accounted for over 70% of shipments arriving at the ports near Tangshan during 2020, higher than the 60% for China as a whole. Trade data also reveals that lump as a proportion of imports is slightly higher than the national average while pellet imports do not differ much from other places. However, CRU still estimates that pellet rates in Tangshan are relatively high for China as there are many domestic iron ore producers near the city and many steelmakers have installed pelletising capacity. CRU has identified ~62 Mt of pelletising capacity around Tangshan, which accounts for ~28% of total operating pelletising capacity in China.

For metallurgical coal and coke, the city relies on supply from other provinces, mainly Shanxi. Tangshan consumed ~70 Mt of coke in 2020, but the city only had capacity to produce 43 Mt according to CRU’s coke plant database, making the city highly dependent on coke supply from merchant producers in other provinces. Around 70% of the coke and coking coal supply is transported to the city by truck, mainly from merchant coke plants and coal mines in Shanxi, located as far as 900 km away. Today, only 30% of the coke and coal supply is transported to the city by rail, but the Chinese government is aiming to increase this share significantly in the coming years.

Another steelmaking hub in Hebei is Handan, located in the southern part of the province. According to the city’s official statistics, Handan produced 45 Mt of crude steel and 63 Mt of finished steel in 2020. It is an important destination for semi-finished products as the city has extensive primary re-rolling capacity. Handan is also targeted by the central government’s goal to reduce overcapacity and consolidate the steel industry. The number of steel companies in the city has fallen from 35 to 17 in the past ten years due to both closures and mergers. According to the city’s Five-Year plan to 2025, it aims to consolidate further and reduce this number to less than eight, while still increasing its capacity of high-end steelmaking.

On 21 April, the city released its environmental control policies for 2021 Q2, which is affecting all the city’s major industries. The policies focus on monitoring pollutant emissions and small BFs that are less than 1,000 m3 and BOFs below 100 t of size are under strict monitoring. However, about 30–40% of steel capacity in Handan comes from furnaces below 1,000 m3 and 100 t and our analysis shows that the environmental control will affect 20% of the steel capacity in the city. Currently, the capacity utilisation rate in the city is about 87%, lower than the 61% in Tangshan, according to Mysteel. This means that the actual impact from Handan’s own production curtailments may not be as significant as in Tangshan.

How production curtailments impact the market

With 11% of global crude steel production, Tangshan and Handan together produce twice as much steel as the second largest steel-producing country in the world, India. Production curtailments will undoubtedly have an impact on the global steel and steelmaking raw materials market. Let us take a closer look at some of the impacts we can expect to see when steel output in the two cities fall.

In a recent insight, China’s production cuts are tightening the steel market, we have outlined and quantified the extension of the recent production cuts in Tangshan. This insight is only available to CRU subscribers. If you would like to access this or discuss the topics raised in this Insight, please contact us via the button below.