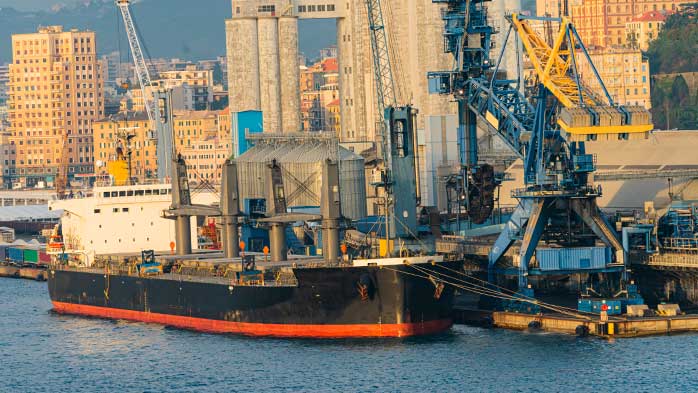 Dry bulk freight rates have risen sharply in recent weeks, catching charterers and owners off-guard by the speed and strength of the rally.


The rate hikes are attributed to a range of factors with most operators in agreement that freight prices will remain at an elevated level through the rest of Q1, and possibly into Q2.

Higher freight rates will certainly affect delivered CFR prices and FOB returns for fertilizer producers in the weeks to come, alongside potential difficulties in sourcing vessels in the short term. 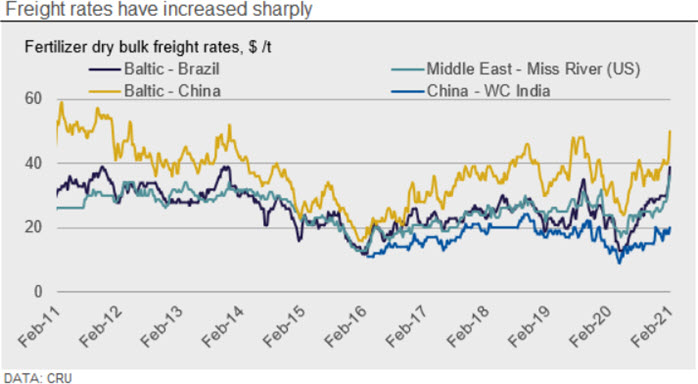 A significant concern for vessel owners and operators is a handful of localised bottlenecks in tonnage supply creating a tight freight market.

One of these bottlenecks is a Chinese embargo on Australian coal which has removed scores of Panamax ships from circulation. They currently sit off the Chinese coast awaiting discharge. Some coal carriers have been stranded at Chinese anchorages since June last year.

More than 60 vessels are thought to be unable to discharge their Australian-coal cargoes, and as such undertake much-needed crew changes, according to the International Transport Workers’ Federation (ITF).

This backlog of vessels awaiting discharge in China has meant a lack of inward cargoes or open ships available in the Middle East and West Coast India.

Given reduced Panamax availability, owners and traders alike have entered the freight market to secure smaller-size vessels to transport coal for other destinations, further squeezing global vessel supply. There is usually some crossover on the cargoes between various vessel classes, and if Capesize and Panamax rates start to rise, Supramaxes and Handysize often follow shortly after, but given all vessels are currently in high demand securing a vessel is made that bit more expensive.

Vessel swapping is not that straight forward either. Vessels transporting ‘dirty tonnage’ such as coal can be in theory be prepared to carry ‘clean tonnage’ with cargo holds clean enough to lift fertilizers or grains, but this is often impractical. Often owners and charterers prefer to keep vessels in either their ‘clean’ or ‘dirty’ niche which means that although a vessel may be available, it is not necessarily appropriate for the cargo. This is especially the case in Southeast Asia for Australian grains.

The vessel shortage has been further compounded by seasonal factors. Severe ice conditions at Baltic Sea ports such as St Petersburg and Ust Luga and at Russian Pacific ports such as Vanino have restricted movement of regular ships, creating long wait times for voyages and a heavy reliance on a small fleet of ice-class vessels.

In Latin America, a very strong grains season has emerged with high demand for vessels just as the US Gulf has been hit by port closures due to the big freeze in Texas. Demand is so strong in this region that freight offers have sometimes proved out of date even before the ink has dried.

The Western Mediterranean also has a very high level of requirements from operators’ cargoes booked in Q4 2020 and ships there are scarce. Q1 is usually a quiet period for vessel operators who often book forward at this time to ensure their fleets and cargo books are busy during what is typically a lean period. This phenomenon has further tightened vessel availability this year.

Added to all this, is an extremely low order book for new vessels or newbuildings. Even if this current vessel shortage spurs a flurry of new orders, it will be around two or three years before they hit the water.

Charterers will have no choice but to pay up for now, with the freight market described as frenzied and the craziest it has been since 2007.

Handysize and Supramax market freight rates are recovering strongly with rates up on average 250% since May 2020 and Handysize rates at a 10-year high, one shipowner told CRU.

Bunker prices, which have been climbing steadily over the past few months and now exceed $500/t on average at Gibraltar are also being incorporated into the sharp rise in daily hire rates, especially for longer voyages.

Given a handful of factors, vessel supply is expected to remain tight for another few months at least. Strong demand for commodities is feeding into this sentiment leading some in the shipping industry to predict that freight rates are not going to fall significantly any time soon.