Evergrande: no longer so grand 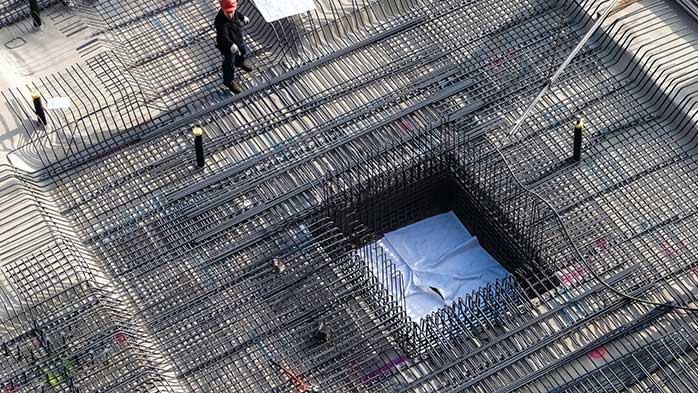 Since China rolled out the “three red lines” policies, China's second-largest developer China Evergrande (EG) has grown to be the most indebted with more than RMB1.97 tn ($305 bn) of liabilities.

Market investors are concerned that Evergrande will collapse and default on part of its debts. As the Chinese real estate sector is a huge consumer of steel, copper and aluminum, this poses risks to metal markets. In this Insight, we examine the development of the crisis, the risks that will emerge if default occurs, and possible scenarios.


What happened in the past year?

Evergrande has expanded rapidly since 1996 due to its aggressive leverage strategy. However, its business strategy is fast unravelling, especially since the rollout of China's "three red lines" policy – a trio of metrics that policymakers have used to encourage the property industry to deleverage (Figure 1). Failure to meet these metrics means no access to new bank loans, and Evergrande is currently short on almost all of them.

Fundamentally, Evergrande has landed in trouble because of the combination of its very high levels of leverage, slower cash inflows due to a slowing property market, and the government’s programme to push the sector to deleverage (Figure 2). 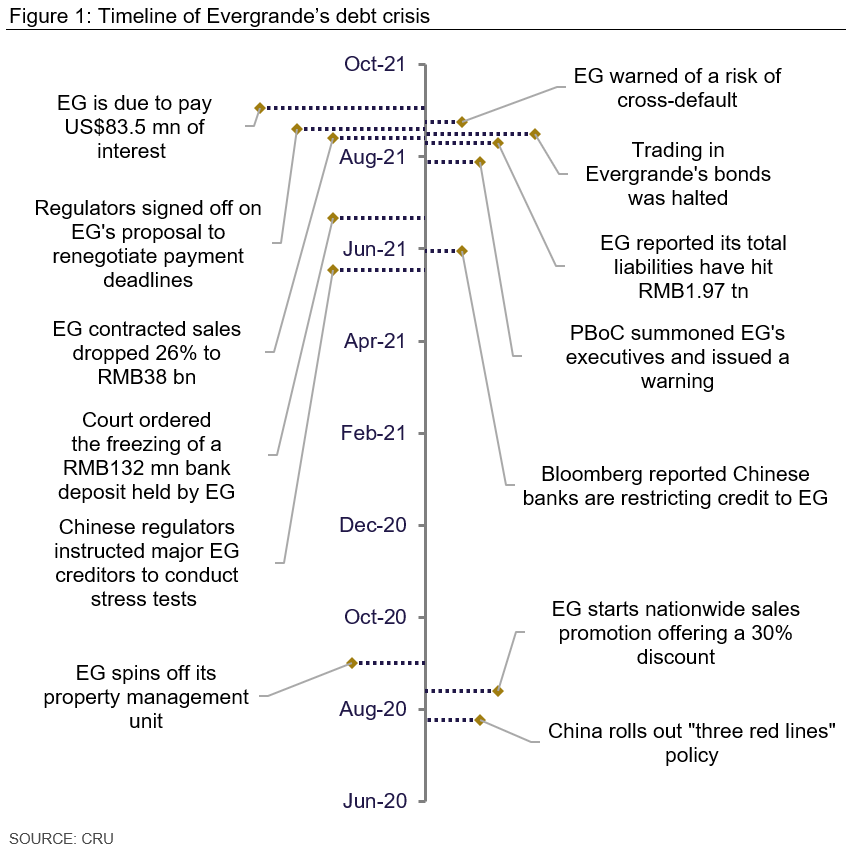 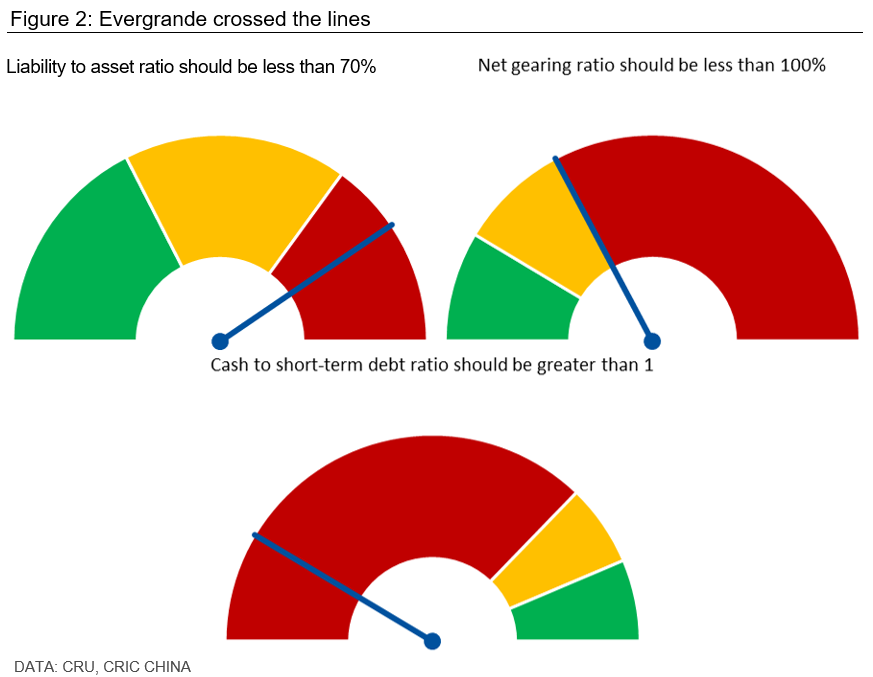 Evergrande has accumulated an enormous debt pile to fund its breakneck growth. This has come from several sources (Figure 3):

Bank loans from traditional large state-owned banks (approx. 20%). These liabilities will give the government substantial leverage over how any collapse is resolved.

Bonds issued through the Hong Kong corporate bond market (approx. 9%), which have plunged in value since June 2021. Many of these bonds are held by other development companies, which have in turn seen their shares and bonds fall in value. Some of these companies have announced capital issuances or redemptions of debt to reassure capital markets.

Wealth Management Products (WMP) (approx. 2%) which were marketed to retail investors. Although a small share of total liabilities, these are politically sensitive as the investors are ordinary citizens who often have few other assets.

Short-term finance in the form of commercial bills and payables to contractors and suppliers (approx. 34%). The government will want to limit the pain felt by suppliers, particularly where they are SMEs.

In total, this huge debt pile and the lack of cash on its balance sheet means Evergrande has been in breach of all three of the regulatory red lines. This means it can’t access fresh funding from the banking sector, and so its financial situation has become increasingly desperate. Starved of cash, it has struggled to complete projects to generate revenue, and so has faced a vicious circle. At the same time, it has been hit by a slowing property market. 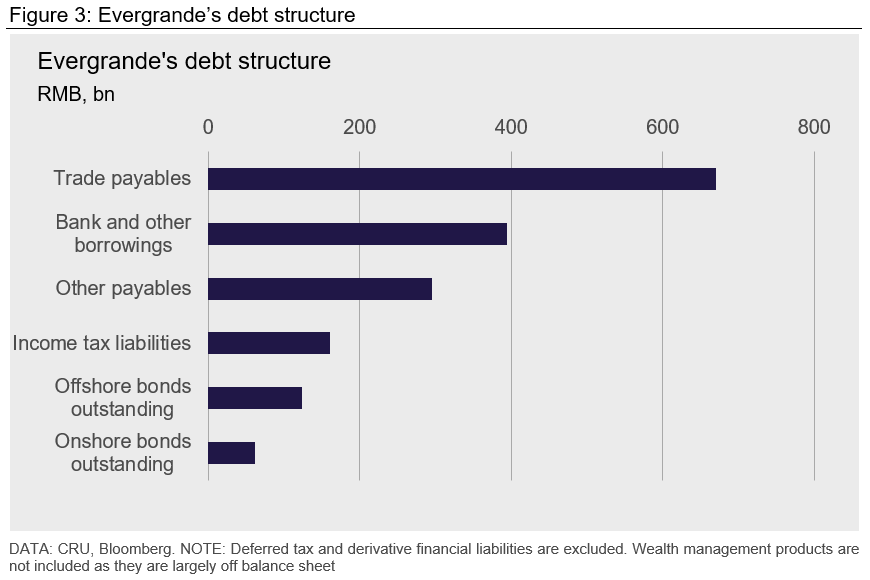 Construction. Work on existing projects could stop, hitting real estate activity (and demand for end-of-pipeline commodities, like Alu). However, the government will be keen to get other developers to take over these projects, although this may require some financial incentives to do so.

Contagion. Most of Evergrande’s debts are to bondholders, who are likely to see big losses. The government wants this to happen so investors learn more discipline (these companies should not be treated as risk-free). However, there are heavy cross-holdings of assets within the construction sector, so other firms will be hit with losses. This could lead to a ‘domino effect’ that reduces construction activity.

Confidence. A messy collapse could hit broader confidence in the (already slowing) real estate sector, leading to a sharper decline in prices and activity, and so hitting other developers. This could also spill over to consumer spending; August retail sales were weak, which may not be entirely explained by Delta.

There are three scenarios discussed in the market:

Full bailout. We judge this to be very unlikely. The government wants developers and their investors to learn the lesson that they are exposed to risk, and do not want to abandon their efforts to ‘clean up’ the real estate sector. Evergrande is not too big to fail.

Complete collapse. In this scenario the government ‘washes its hands’ of the situation. Work on most Evergrande projects ceases, with knock-on effect through the supply chain. This is also unlikely – the state will want at minimum to keep control of how pain is shared among the different stakeholders.

Co-ordinated resolution. The government allows bond holders and some other creditors to suffer significant losses, but uses state-owned banks (which are well capitalised) to protect politically sensitive stakeholders. Crucially, existing Evergrande projects are transferred to other developers, with financial incentives where necessary. We judge the third option to be the most likely.

In terms of the impact on commodity markets, the bailout scenario would have little if any impact. If anything, developers could be emboldened in future, perceiving a government guarantee for the sector. A complete collapse would be most serious for metal demand. Impacts of a coordinated resolution scenario should be manageable, but the devil will be in the detail. And the confidence impacts on the wider market are difficult to estimate at this stage.

In sum, we do not expect the Chinese government to take actions to fully bail out Evergrande. Since a government bailout would taint the year-long deleveraging campaign in the property market, a government bailout will only occur if contagion causes other major developers to collapse. We expect the Chinese authorities to handle Evergrande’s situation via an orderly debt restructuring process by selling its substantial assets, land and completed properties. In addition, the government may support Evergrande in its negotiations with its creditors to extend payment deadline and ensure the sales proceeds will go to contractors and at least some of the investors.

We believe these measures would remain largely aligned with the policymaker’s preference for market-based resolutions of distress situation. On the one hand, this would uphold the Chinese authorities’ message for financial discipline in the property sector to minimise moral hazard. On the other hand, the restructuring process will help transfer the land plots originally held by Evergrande to other developers who have the capacity to initiate projects without over-leveraging their balance sheets. The government will support the distressed company only if it learns the lesson. Policymakers are unlikely to lose their grip on developer financing restrictions despite Evergrande’s recent liquidity crisis (Figure 4).