In this Insight, we examine a number of factors which could be inflationary over the next few years. While these should not be dismissed as risks, we believe fears of high inflation are premature. Furthermore, the response by central banks, as well as the underlying source of the inflation, will be crucial in determining what the implications are for the global economy.

Inflation in many major economies decelerated sharply during the Covid-19 crisis. Inflation has begun to recover in the US and Europe (Figure 1). It is likely to increase further in the short-term as base effects from energy price movements unwind.

Despite headline rates below 2% targets, there has been a much sharper increase in expectations of future US inflation, as measured by the difference between yields on inflation-protected and nominal government bonds (so-called ‘breakeven’ rates). 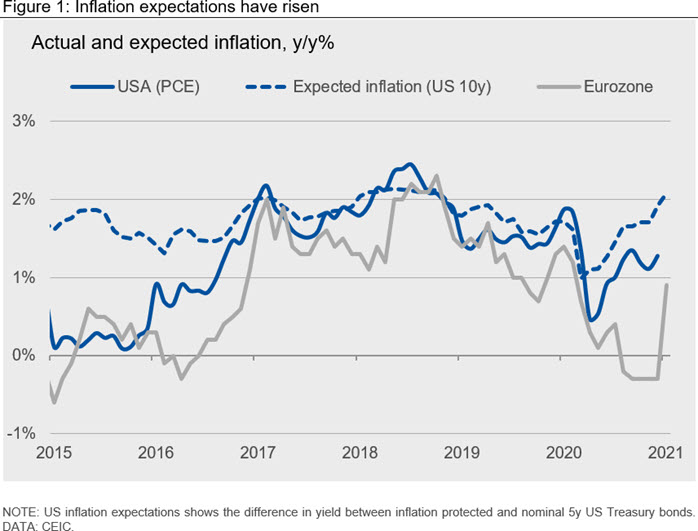 This increase in breakeven rates is symptomatic of a broader concern amongst many economists and analysts in financial markets. There are a number of reasons why inflation could rise, covering both demand and supply factors (Table 1). 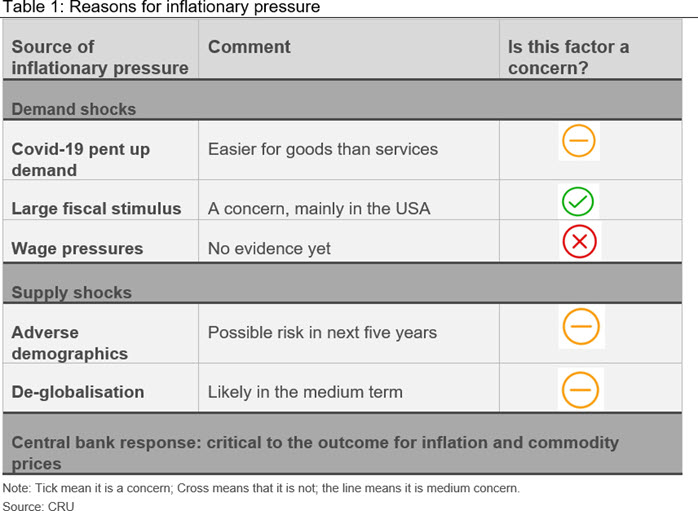 What would a rise in inflation mean for the global economy? This depends on two things:

Figure 2 summarises how different combinations of demand/supply and central bank response could translate into outcomes for inflation, growth, and interest rates. 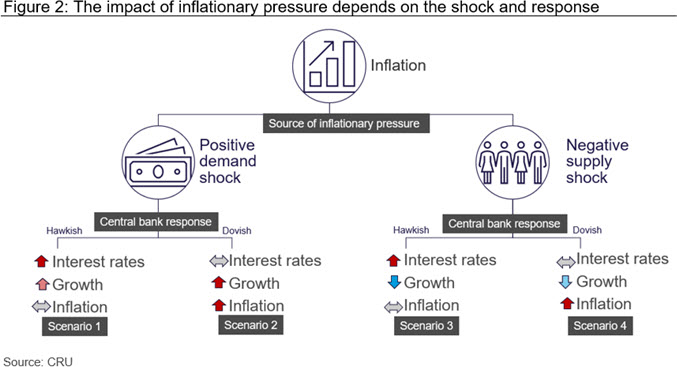 We now expand on the factors set out in Table 1 which could drive inflation higher.

Pent up demand could supercharge the recovery

Lockdowns and social distancing have resulted in ‘forced saving’. Households still in work (or whose income is fixed, or protected by fiscal support) have been unable to spend on hospitality, leisure and other services. This has led to households – in aggregate – increasing their saving substantially. 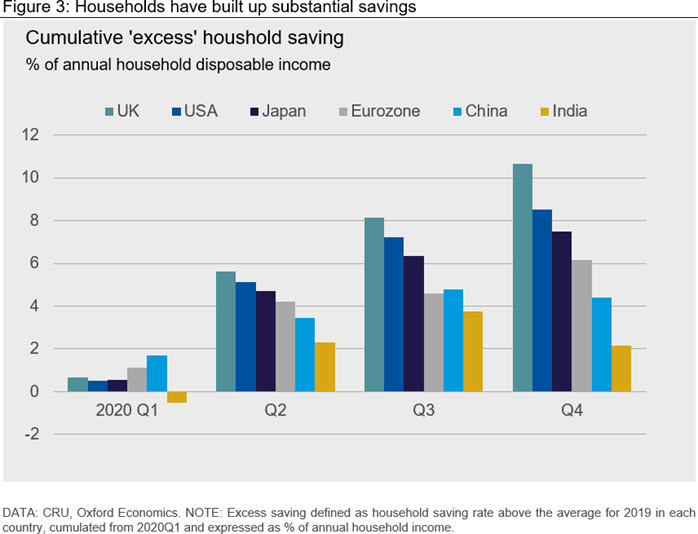 If a substantial part of these savings are spent as Covid-19 restrictions are lifted, this could mean that instead of ‘catching-up’, demand ‘overshoots’. In turn, this could fuel inflation, particularly if service sectors face some supply constraints as they re-open (for example, limits on capacity in restaurants and bars).

However, demand for services may not ‘overshoot’ in the same way as demand for durable goods can. Will people really take double the normal number of holidays, or eat out twice as much, to make up for lost time? Furthermore, the opposite effect is possible. Having experienced the most dramatic economic shock in decades, which has stretched many balance sheets, households and firms may be more cautious, and seek to build up larger safety buffers. This would be a headwind for demand for some time, so our view here is that the risks are two-sided.

Fiscal stimulus has been used to support most major economies as they continue to deal with the economic losses from Covid-19. The USA stands out because Congress is currently debating a third large stimulus package – Biden’s $1.9 tn American Rescue Plan (ARP). Cumulatively US fiscal stimulus could be as large as $5 tn or 25% of GDP. That is a large amount of stimulus, albeit spent over three years, 2020 to 2022.

The sheer size of the US stimulus is a key reason why inflation concerns in markets have been elevated. It has worried prominent economists, such as Larry Summers, who are normally not worried about inflation. 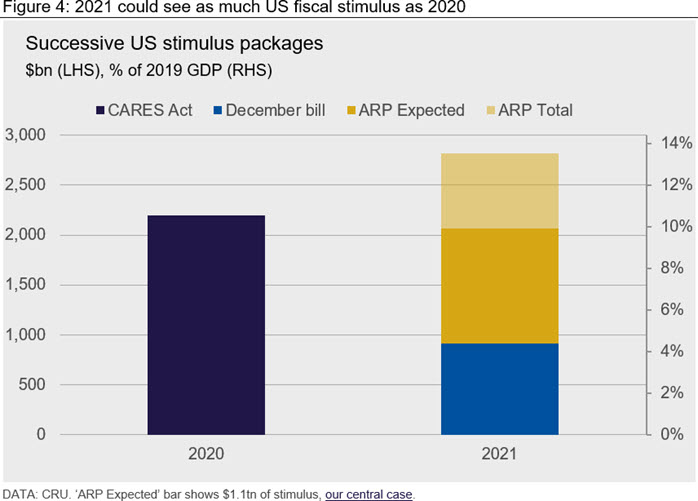 Fiscal stimulus packages have been much smaller outside the USA. In China it was 6.1% of GDP in 2020; more is expected in 2021 as part of China’s 14th Five Year Plan. The EU undertook fiscal stimulus of around 4% of GDP in 2020, and the Next Generation Fund will deliver a further 4% over the period 2021-26. Even though fiscal packages outside the USA have been smaller, when several countries stimulate together it gives rise to a larger impact on global demand growth.

Our view is that the scale of fiscal stimulus poses valid upside risks to inflation.

Demographic change could shift the balance between demand and supply

Longer term factors could also push up inflation. Economists Charles Goodhart and Manoj Pradhan have drawn attention to how important demographic change could be for the global economy. Apart from India, most major economies will see the working age population shrink over the next five years, and beyond (Figure 5). Meanwhile, the number of people of retirement age will continue to grow at relatively fast rates.

This has negative implications for growth in many regions, which we have explored in our Long Run Macro Report (available to CRU subscribers). Goodhart and Manoj argue that it could also be inflationary because it means the ratio of consumers to workers will rise.

However, the Goodhart-Manoj thesis is not supported by the experience of Japan. Over the last twenty years the working age population has shrunk by around 14%, while the retirement-age population has grown by almost two-thirds. This has not led to inflation; if anything, the opposite. Japan has experienced low or negative inflation for most of this period.

While important for growth, we do not see demographics as a major inflationary concern. 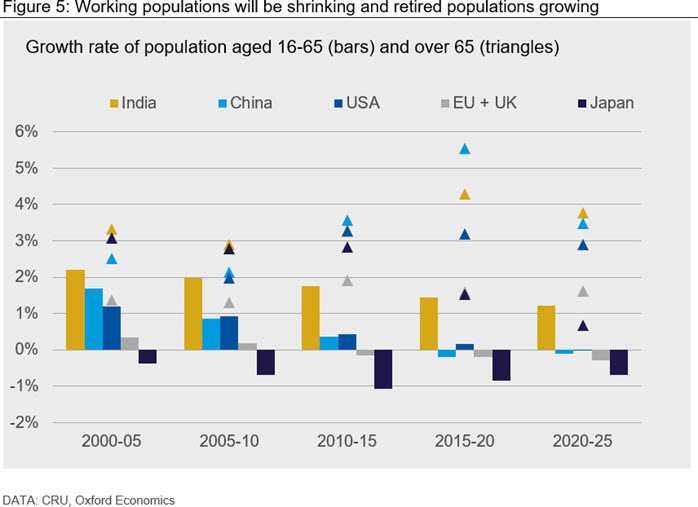 Deflationary headwinds from globalisation could fade

Over the past two decades advanced economies have benefitted from globalisation in the form of cheap imports from China, and other Asian economies. However, those deflationary tailwinds are reducing, and may even reverse. 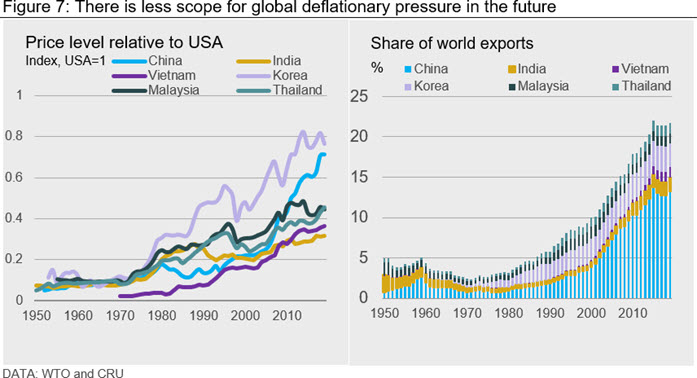 When China joined the WTO in 2000, the average price of its goods and services was only 20% of the average price level in the USA. Imports from China were cheap. As the share of imports from China and other low-cost economies grew, it put downward pressure on advanced economy inflation. The IMF estimated that these deflationary forces could be large enough to reduce advanced economy inflation rates by around 1 percentage point. That is significant in relation to inflation targets of 2 percent.

Figure 7 shows that by 2019 average prices in China had increased to 70% of US prices – so no longer so cheap. Chinese exports to the rest of the world have also plateaued. This is evidence that the deflationary forces are waning. Sentiment against globalisation has also hardened, epitomised by the US-China trade war. Many now predict further de-globalisation.

Our view is that deflationary tailwinds are likely to fade over the next decade and gradually push up on inflation. However, this is unlikely to contribute to a sharp rise in inflation in the next five years. 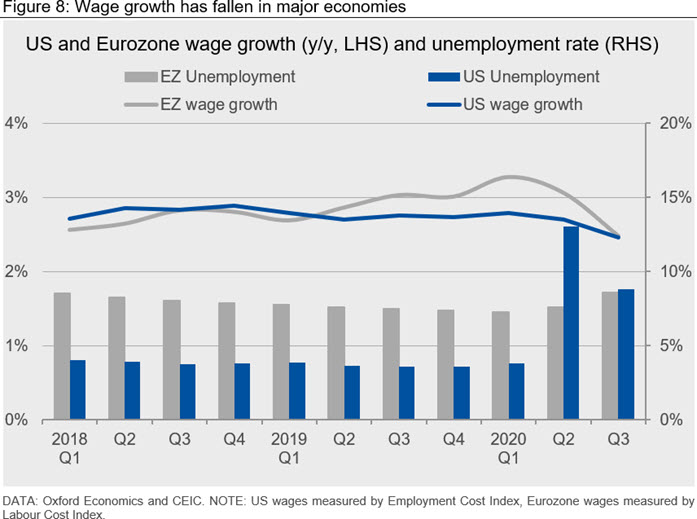 Wages make are the largest component of costs in the economy, and so a sustained rise in inflation will only come about with a sustained rise in wage growth. At the moment, there is little evidence that this is an area of concern. Wage growth has decelerated in both the US and Eurozone (Figure 8). Unemployment remains elevated and would be even higher in Europe without extensive government support. Although a recovery in GDP will boost labour demand, it may take time for unemployment to return to 2019 levels. Furthermore, 2019 saw wage growth of 2-3% in the USA and Europe, broadly consistent with inflation targets. Higher rates of wage growth would probably be needed to push inflation persistently above target.

For these reasons, we do not see a clear and present danger to inflation from wage growth.

Whether the factors above translate into actual inflation depends on how central banks respond. Currently, monetary policy in advanced economies is exceptionally loose. However, this is in response to years of disappointing growth and modest inflation – and of course the pandemic. If the inflationary pressures outlined above appear likely to push inflation above central bank targets, the likely outcome will be tighter policy – or a quicker end to QE. 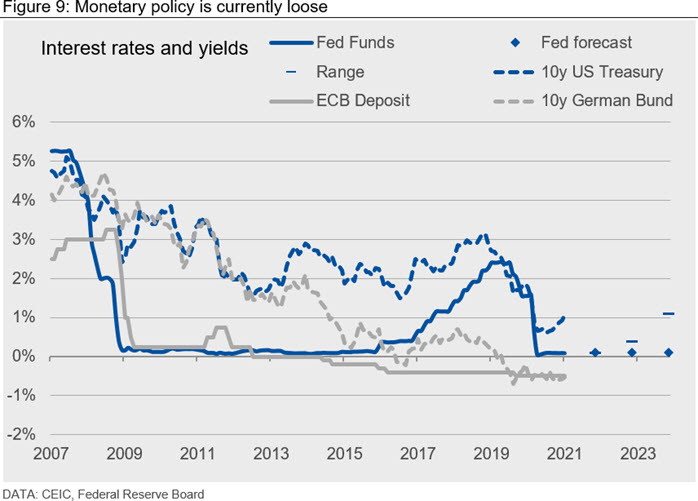 Some economists have argued that, with high debt burdens in the private and public sector, central banks will face political pressure to keep interest rates low, even in the face of rising inflation. The Fed have adjusted their policy framework to allow for some overshooting – provided the 2% target is met on average. However, we view a more wholesale loss of independence as a low probability (although high impact) event.

A more likely possibility is that central banks make a policy error. For example, central banks may perceive the risk of higher inflation too late, at which point broader inflation expectations have already risen. The process of bringing inflation down then becomes more painful and requires a larger tightening in policy.

The 70s are not the future, but the present won’t last forever

Although there are a number of factors that could push up inflation, we think warnings that inflation is about to take its revenge in the next five years are premature, and in some cases misplaced. However, if the recovery does proceed at pace, central banks may need to address inflationary risks. That would mean the end of the current regime of super-loose monetary policy.