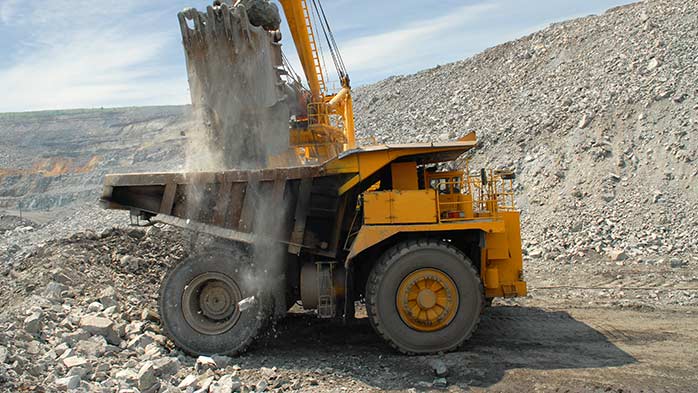 In the past six months, commodity prices have risen sharply on positive vaccine news and government stimulus across the world. Steel and iron ore are two of the top-performing commodities, mainly caused by a rapid demand recovery and a slower supply-side response.


This has resulted in exceptionally high margins for these commodities, and current price levels are well above the costs of the marginal producers. What makes the iron ore price rally of 88% over the past six months even more impressive is that prices have risen from an already high level in November 2020. We find that while supply is constrained relative to strong demand, there is little to support prices at current levels for an extended period. 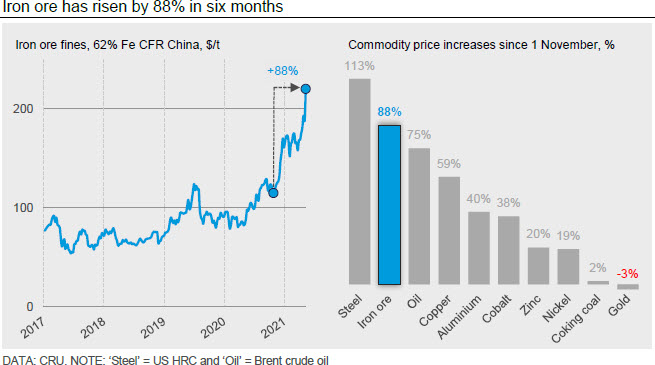 Iron ore prices had already started rising in 2019 following the tragic dam accident in Brazil, which resulted in Vale’s production dropping from a planned 400 Mt/y to just around 300 Mt in both 2019 and 2020. The company has lost its position as the largest iron ore producer in the world to Rio Tinto, which has managed to produce and export around 330 Mt/y in the past two years. At the same time, we have seen strong performance from BHP, FMG and Roy Hill, three companies that have reached or even exceeded nominal capacity. As a result, Australia has increased its dominance on the supply of iron ore and reached a seaborne supply market share of nearly 60%.

In the coming years, we only see modest supply increases from these companies, simply because there is not enough spare capacity in their systems. There are some new mines that have recently started producing or will deliver the first ore in the coming year, including South Flank (BHP), Gudai-Darri (Rio Tinto) and Eliwana (FMG). All these projects are replacement projects and will not result in increased production from the majors. The only planned addition is FMG’s Iron Bridge, a 22 Mt/y project that we expect to come to the market in 2023. In addition, the recent price rally has resulted in a few small, high-cost miners with a capacity below 2 Mt/y entering the market to take advantage of the high prices. 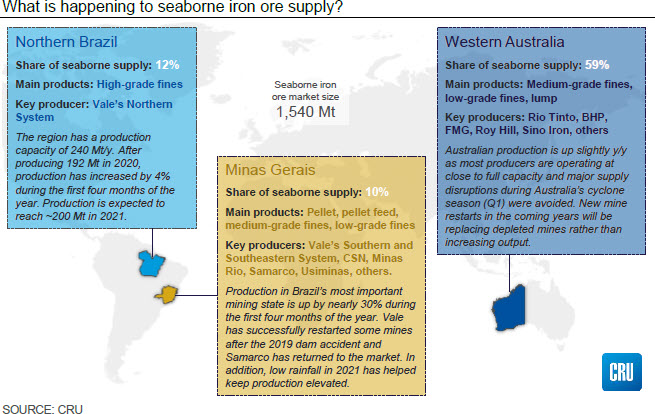 In the other parts of the world, we see few opportunities for the supply side to respond to the higher prices. Countries that have increased exports in recent years, including Russia, Ukraine and India, will reduce exports slightly as they will give priority to steelmakers on the domestic market. Just like in Australia, we see smaller producers entering the market in other parts of the world, including West Africa, the USA and Brazil. This volume will be limited and the major supply addition from 2021 onwards will be Vale in its efforts to increase production from the ~300 Mt produced in recent years back to 400 Mt/y. However, this will require a successful restart of many mines, which will go through several complex licensing processes. Therefore, the journey back to 400 Mt/y will take time and we expect the resumption of pellet feed production to be particularly slow.

This rally is mainly demand-driven

Seaborne supply has been improving in 2021 with a strong performance by Australian producers and increasing volumes coming out of Brazil. So how can prices double in one year while supply is also increasing?

Looking at the demand side, we can see that Chinese demand for iron ore has been exceptionally strong after the Covid-19 outbreak in early-2020. Steel production has been elevated due to sharply rising steel demand caused by stimulus measures boosting infrastructure investments and strong demand for steel-containing goods, both in China and on the export market. Importantly, almost all of the increases are coming from the iron ore-based BF-BOF route while scrap availability has limited the ability to increase EAF production.

Steel production in China was very strong in Q1 this year, particularly when compared with 2020 Q1 when output was hampered by China’s Covid-19 outbreak. Since then, there have been production cuts announced in the city of Tangshan, the world’s largest steelmaking hub. Similar measures have been implemented in Handan, another steelmaking centre in the southern parts of Hebei province. Despite evidence of smaller BFs shutting down in these regions, Chinese steel production has continued to rise as larger producers are increasing output as much as they can while we are also seeing signs that scrap supply has improved and EAF production has increased in recent months. In addition, we are hearing from several sources in the market that many BF-BOF producers are also taking measures to raise production in anticipation of further production cuts in other key steelmaking regions such as Jiangsu and Shandong. Such measures include postponing maintenance and charging higher-grade ore to the burden to boost productivity. This is one reason why the premium for high-grade ore (i.e. 65% Fe and higher) has risen in recent months. 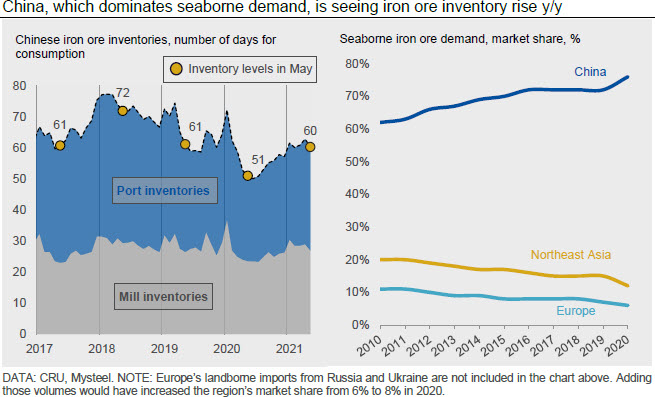 Demand in other iron ore-importing regions is also on the rise and we see a similar pattern as in China with rising production levels and a need to build up inventories in the supply chain. Europe and Northeast Asia (ex. China) currently account for less than 20% of seaborne demand, while China’s market share rose above 75% in 2020. This means China’s dominance over the iron ore demand side is higher than ever and factors such as restocking needs or expectations of demand changes have a significant impact on the sentiment in the iron ore industry. This has played a particularly important role in the past months as investors are taking positions on the futures market based on expectations of stimulus measures or steel production cuts in various parts of the country. When futures prices rise, it increases the perception of a tight physical market, which gives iron ore traders more leverage to ask for price increases in negotiations with mills.

Where do we go from here?

Our analysis show that the recent price rally cannot be explained by the supply and demand dynamics in the physical market. Seaborne supply has improved from last year and we are heading into a seasonally stronger supply period with the Australian cyclone season behind us and an end to the rain season in northern Brazil around the corner. The combination of an improved inventory situation in China and slightly higher demand in the rest of the world suggest the market is about as tight as this time last year when iron ore was trading at just over $100 /dmt. The cost profile of the industry has risen somewhat since then with small-high-cost producers entering the market as marginal players while other costs such as oil and freight have increased. Prices over $200 /dmt are still well above the costs of even the highest-cost producer in the market and the lowest-cost suppliers are enjoying margins as high as 90% at the moment. 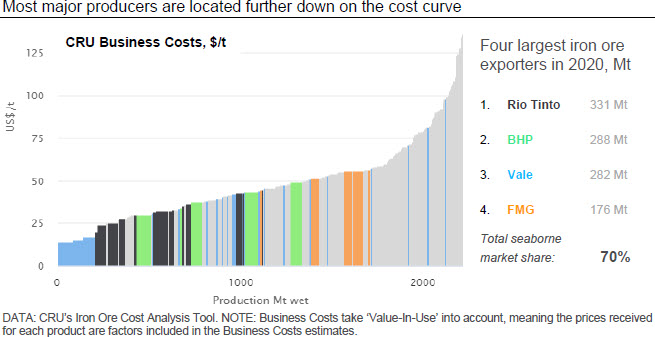 Because we do not see extreme tightness in the iron ore market, now or in the future, we see little support for the iron ore price rising this high above the costs of the marginal producer in the market. We expect the price to decline as dynamics in the physical market start taking over at some point, although the timing and magnitude of the fall is challenging to predict. That said, we highlight two risks that could delay the correction and keep prices high going into the second half of the year: