Score at half-time: will the strong recovery continue? 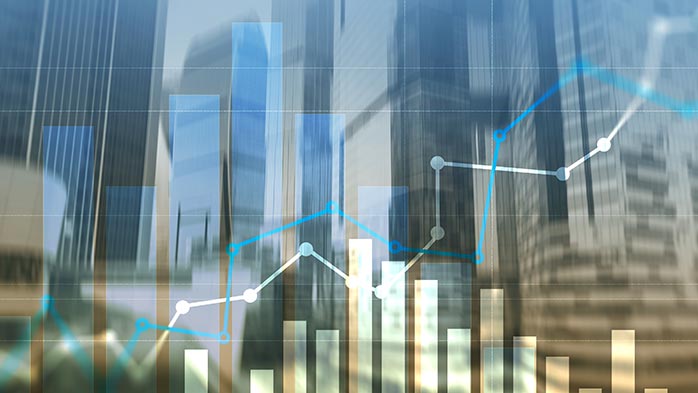 In this mid-year update to our global economic outlook, we look back at our expectations at the beginning of the year, and those of our surveyed clients (CRU subscribers only), and compare them with actual outcomes over the past six months.


Overall, the global economy is in vastly better shape at the start of the second half of 2021 than was expected six months ago, thanks to a powerful combination of mass vaccination rollouts and massive stimulus. Five key points are discussed in this outlook: the global recovery, inflationary pressure, vaccination rollouts, auto production and the outlook for China. 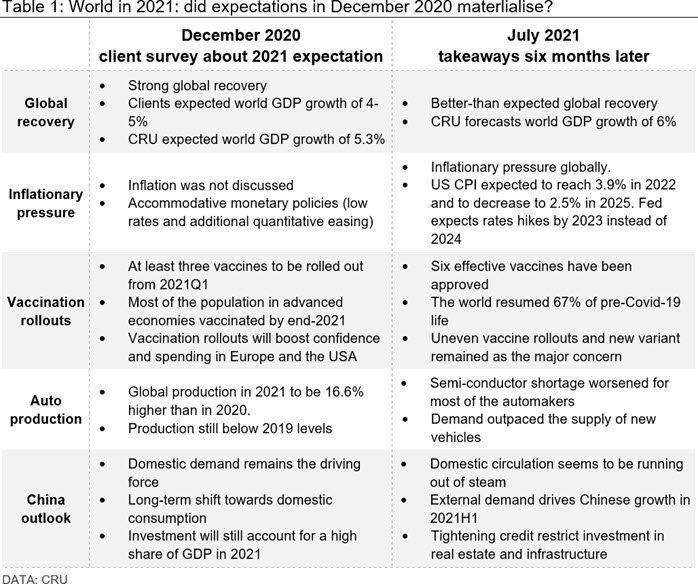 The global economy recovered faster than expected in 2021. CRU now forecasts global growth of 6% in 2021, compared to a forecast of 5.3% six months ago. Most of our clients were expecting 2021 GDP growth of 4-5% in January. This better-than-expected recovery mainly reflects the success of vaccine distribution in the USA, Europe and China and large fiscal support. This allowed activity to pick up, boosting private consumption and especially demand for durable goods. International institutions, such as the IMF, have raised their 2021 GDP growth for all major regions in the last six months (Figure 1), this supports our view that recovery will continue to be robust, and that the worst is behind us.

Major risks to global growth are the slow pace of vaccination in emerging markets and the spread of vaccine-resistant new variants. The rise of new cases could lead to more social distancing rules and delay further the complete recovery in the services and hospitality sectors. 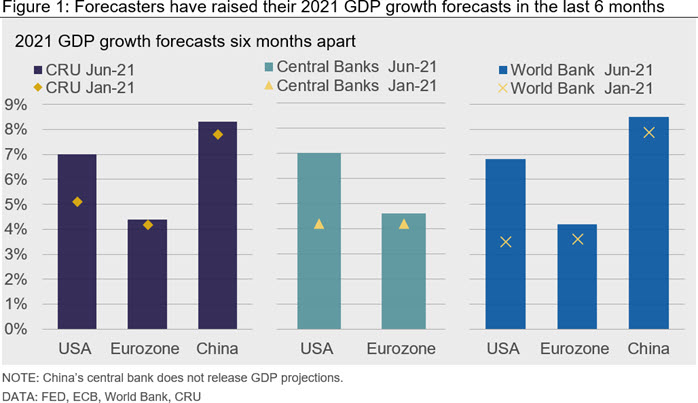 Inflation expected to be only transitory

In the last few months, the USA, China and the Eurozone all suffered inflationary pressures. These arose from the demand side of the economy, via strong consumer demand especially for durable goods, and the supply side of the economy, via rising costs and supply chain disruptions. On the demand side, countries that saw falls in unemployment in the last six months and received large fiscal stimulus, mainly in the form of direct support to households, are generally facing higher inflation (Figure 2).

In response, the Fed in June brought forward the date when it expects rates hikes. Most FOMC members now expect rates to begin rising by 2023, and not 2024 as expected in March.

We believe high inflation will be only transitory and should ease in 2022 once the recovery slows down later this year. However, risks remain, such as a tightening labour market in the USA. These could prolong high inflation. 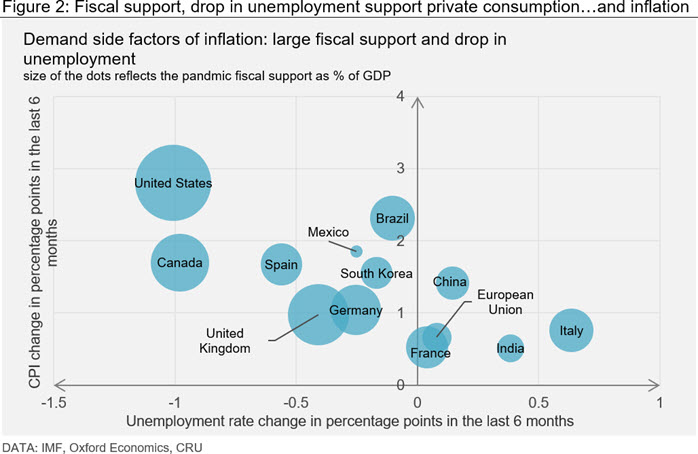 Vaccination rollouts were faster than expected in 2021. At the beginning of the year, CRU expected at least three effective vaccines would begin to be rolled out during 2021 Q1. As of July, the WHO has listed 6 effective vaccines for emergency use and 27.5% of the world’s population had received at least one dose of Covid-19 vaccine, compared to less than 1% six months ago. The number of vaccine doses administered around the world now stands around 4 billion.

A key near-term uncertainty is whether the spread of the Delta coronavirus variant will trigger another global surge in Covid-19 cases, prompting delays or the reimposition of restrictions. Notably, cases are on the rise in highly vaccinated economies, such as the UK and Israel, where the Delta variant is now the dominant strain. However, vaccines have significantly softened the link between cases and hospitalisations, which implies that the surge in cases is less of a worry than in the past (Figure 3). 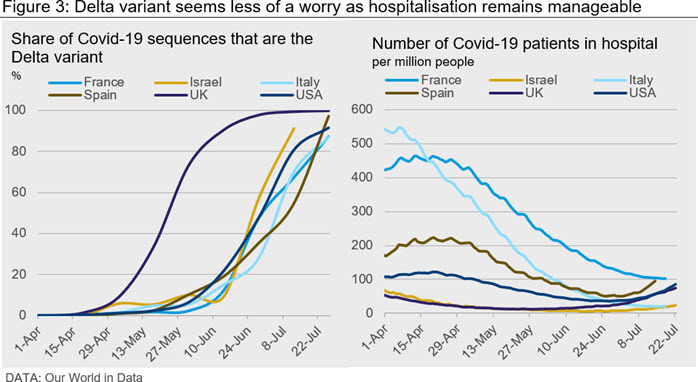 Vaccine inequity is still the world’s biggest obstacle to ending the pandemic and recovering from Covid-19. While vaccination rates are progressing well in many advanced economies, poorer and emerging market countries are being left behind (Figure 4). The problem of uneven vaccine roll-out has caused extending lockdowns in several Asian countries such as Indonesia and Vietnam and further disrupted the global supply chain.

Looking ahead, there will still be a high degree of uncertainty in 2021 H2, especially regarding possible renewed virus waves and the mutation of new variants. We expect the central theme for 2021 will continue to be effective vaccination programmes that will sustain economic recovery. 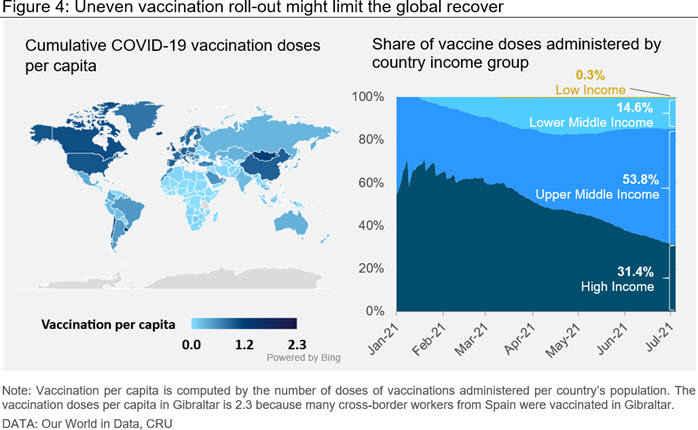 In our earlier forecast, CRU expected automotive output recovers from Covid-19, but remain below 2019 level. When word of a semiconductor shortage began to circulate at the end of last year, there were many unknowns. As we move beyond the six-month mark, shortages of semiconductor have been hurting manufacturers of automotive in 2021 H1.

To reflect the impact of the shortage and supply chain disruptions, we lowered the forecast of 2021 global auto production by 3 percentage points to 13.4% in June 2021 from 16.6% six months earlier. By comparing CRU’s forecast of automotive output for 2021 conducted before the Covid-19 outbreak (i.e., December 2019) to the ones conducted before and after the semiconductor shortages hit the automotive output (i.e., November 2020 and June 2021), we roughly estimate the impacts of Covid-19 and semiconductor shortages on the automotive output in 2021 by country. This enables us to identify the countries that performed relatively well, despite the difficulties, and those that have done badly (Figure 5).

China has experienced rapid recovery since late 2020. CRU has revised up its forecast of China’s 2021 GDP growth to 8.3%, from 7.9% six months ago. The revision is mainly due to strong external demand for durable goods, as the China trade juggernaut gathered pace. Nevertheless, the tightening conditions in the property sector and rising commodity prices have put pressures on investment and consumption (Figure 6).

To address the concerns about the impact of rising costs on small and medium-sized enterprises (SMEs), PBoC announced to cut reserve requirement ratio (RRR) by 50 bps in early July. This move has stoked debate about whether a new policy easing cycle is beginning. We think the cut in RRR is neither a rush attempt to stimulate faltering recovery, nor a technical adjustment with no policy implications, but a shift to a pre-emptive ‘cross-cyclical’ adjustment. The term ‘cross-cyclical adjustment’, a new phrase appeared several times in the State Council’s statements since July 2020. It was meant to contrast traditional counter-cyclical policies that support short-term growth by ramping up long-term financial risks. Cross-cyclical adjustments focus on long-term stability in economy to deal with short-term cyclical risks.

Looking ahead, we expected China to consolidate its economic recovery in the second half of the year. As industrial production and investment stabilise, export ease and retail sales recover, the most likely policy outlook is that the central bank will leave its policy rates remain unchanged until 2022. However, the State Council’s recent statement did signal that the authorities could be more dovish than previously believed. Given this surprise and the PBoC’s preference to fine-tune rates with small increments, we cannot rule out a small, 5 bps, cut in policy rates in 2021 H2. 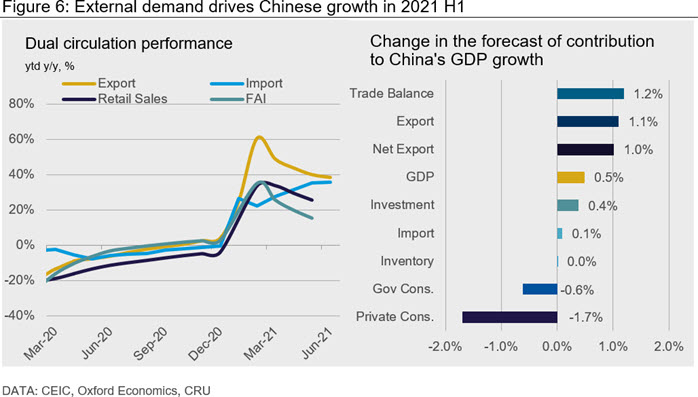