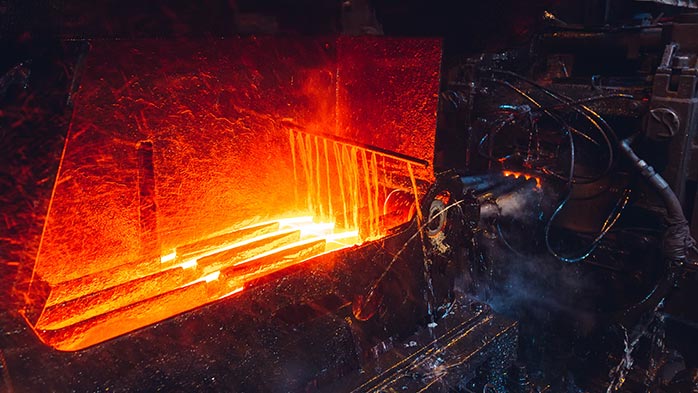 The surge in European electricity prices is now affecting European steel producers’ costs. With data derived from the CRU Steel Cost Model, this Insight demonstrates how the impact varies by steelmaking technology used and by country.


EAF-based producers are affected more than BF-BOF producers. The UK is affected more than other countries. Affected producers will see their competitiveness reduced if high costs persist. In some cases, mills are already facing intra-day electricity prices that have pushed costs to more than double the steel price. Such producers have no option but to switch off.

The rise in electricity prices in Europe is now affecting European steel producers’ costs. We have used the CRU Steel Cost Model to show the impact varies depending on the steelmaking technology and country.

Although steelmakers around Europe are affected, the UK is affected most. Current electricity prices make UK producers less competitive compared to German producers.

UK electricity costs are already higher at steady state and are more exposed to the gas price than Germany where coal is used more as a power source. 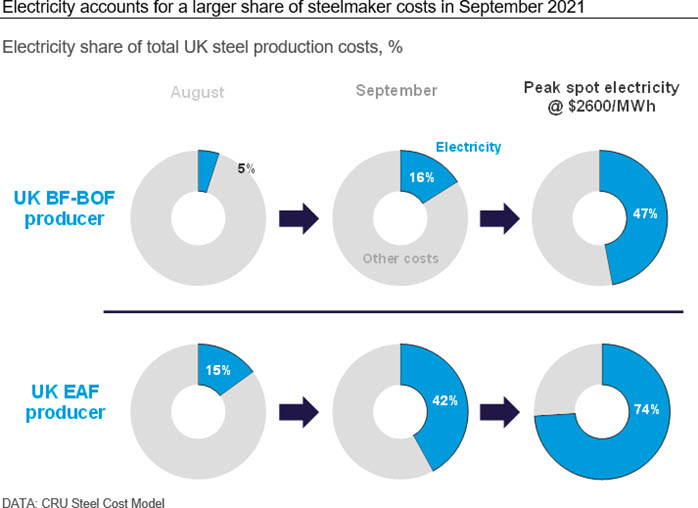 Most BF producers profitable, but there are some struggles

For BF-BOF based flat product producers exposed to the spot electricity market, costs have increased but generally producers remain profitable.

The effect is not uniform. While costs in September 2021 have increased by $30 /t m/m in Germany, UK producers are hit harder with costs rising by $100 /t compared to the situation only a month ago. In both cases, producers remain highly profitable, supported by record high prices for sheet steel products in the region.

Further extreme peak rates have been reported in the UK. A peak spot electricity price of $2,600 /MWh would render UK BF-BOF producers unprofitable at those times of the day: in this scenario, HR coil production costs would increase by over $600 /t compared to the average.

Production is likely to be reduced at peak times, particularly for downstream operations that are not located alongside steelmaking. Depending on individual site energy balance it could be more profitable for mills to sell on-site power from off gases back to the grid than to power rolling mills. 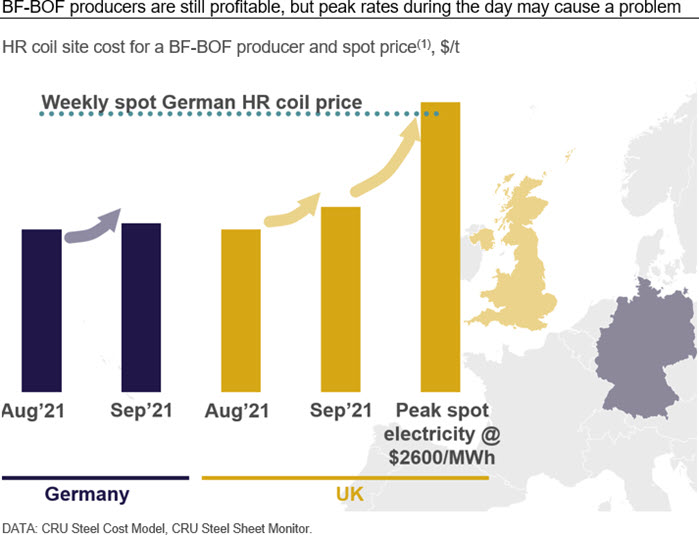 EAF producers have been hit most by high electricity prices

EAF producers have been affected more than BF-BOF producers and some are now loss making.

In Europe, nearly all EAF producers serve the long products market. Although high, long products prices have not increased to the same level as sheet products this year. This combination means margins are under more pressure for EAF-based rebar producers. For some, they have turned lossmaking. 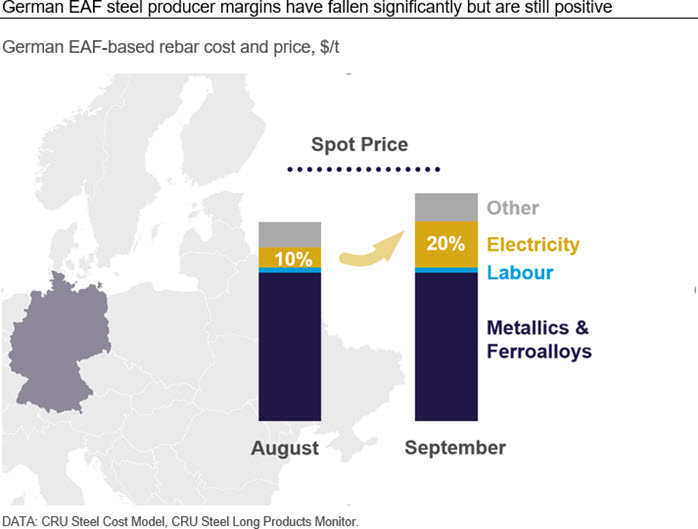 For German EAF-based producers, production costs have increased by around $100 /t m/m. For rebar production, electricity is now 20% of total product cost but margins are still positive.

UK EAF-based producers have a much bigger problem. Costs have increased by over $360 /t and electricity now accounts for over 40% of total cost. 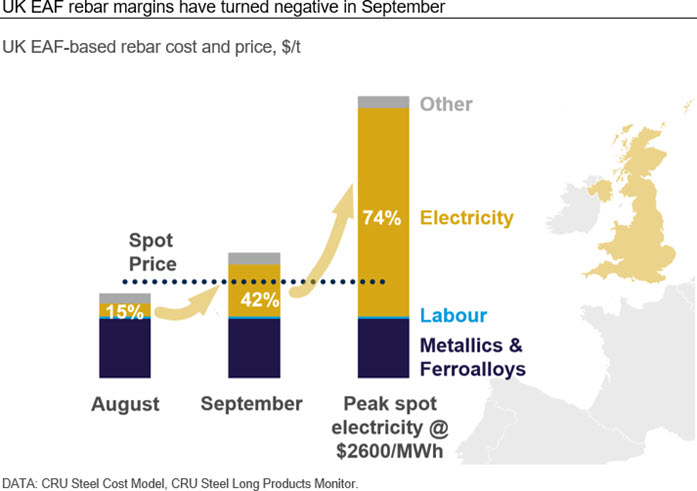 This is enough to turn margins negative and is reported in the press to be affecting production output already. The impact of the peak intra-day energy rates is stark. At a rate of $2,600 /MWh, the cost of rebar production is over double the current spot price. Producers have no option but to switch off.

While other countries - like the US - have yet to see surging energy prices, similar analysis using the [CRU] steel cost model can help producers prepare for the likely increase.

Please contact us below for more information on this subject or to understand how the CRU Steel Cost Model can help your business.