The missing pieces in the battery puzzle - Part 1


2020 was the ignition point for the EV transition as new energy vehicle (NEV) sales reached 3.3 M units, rising 36% y/y. 2021 is on track to grow even faster with sales expected to exceed 6 M units. By 2025, annual sales are likely to reach around 15% of the total automotive market, from 7% currently.

The EV share is rising for several reasons, including improving cost competitiveness, supportive policy and extended vehicle range. Model variety and availability is important in appealing to a wide spectrum of consumers and this has improved dramatically in the last couple of years, which has helped in driving widespread sales growth.

Asia has traditionally been the hub of Li-ion battery production. In 2016, the region accounted for around 93% of global battery production capacity, with 69% in China alone. By 2020, China’s share had strengthened further to 77% but the combined share of the two other largest automotive markets, Europe and North America, had risen to 18%. 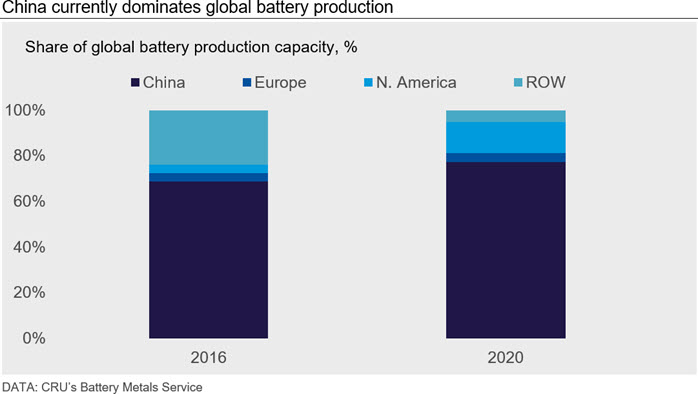 This rising trend outside of China is continuing. Automotive OEMs are committing to fleet electrification and there are very few major companies that have not set a target for either a partial or full transition to EVs in the next 5-10 years. At the same time, many OEMs are also committing to build out substantial battery manufacturing capacity to support the production of EVs at scale – this is particularly the case in Europe and North America. It is important for production to be close to EV assembly primarily due to the weight of batteries and freight cost considerations, as well as some safety concerns.

In recent weeks, we have seen Stellantis and LG Energy Solutions agree to a joint venture for new capacity in North America, a commitment of $11.4 bn by Ford and SK innovation for three battery plants and an EV assembly plant, and Mercedes taking a 33% stake in Automotive Cell Company (ACC), the battery cell manufacturer (Stellantis also have a 33% stake). ACC have three battery projects, the most progressed of which could start in northern France in 2023. 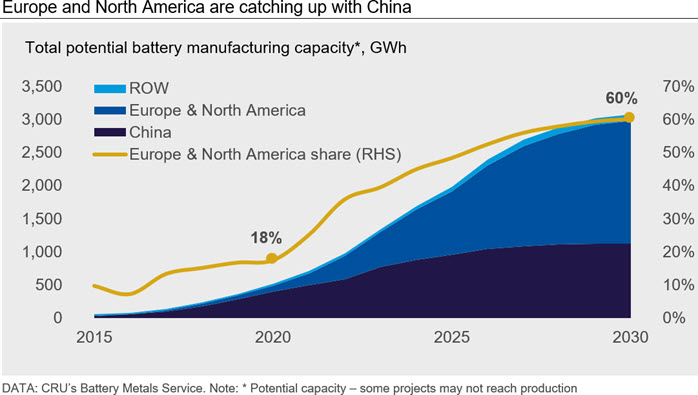 A large proportion, however, is still in the relatively early stages (‘Other’ in the chart below) and plans will need further development, including proposed scales, timelines and securing funding. This is particularly the case from the late 2020s onwards where the proportion of more speculative capacity starts to rise, given the many new potential battery plants that have been announced in the last 12 months. 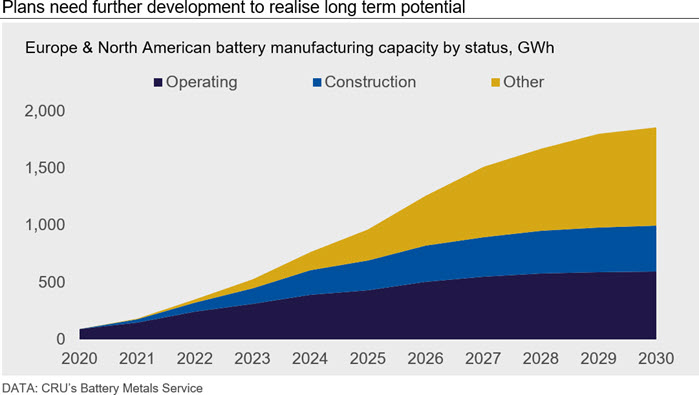 By the mid-2020s, NEV sales in Europe and North America are expected to exceed 7 M units per year, a more than four-fold increase from 2020 and account for close to half of global sales. Based on the expected pace of the EV transition, the regionalised battery build out is justified, but there is still a piece missing in this puzzle. And it lies not in electric vehicle or battery capacity, but the critical raw materials in the batteries themselves.

Similarly to battery capacity, China is the dominant force in battery chemical, precursor and cathode production. 72% and 64% of cobalt and lithium refining, respectively, was in China in 2020 (using data from CRU’s Cobalt and Lithium Market Outlooks). For precursors and cathodes the picture is similar with 69% in China in 2020 and 25% in Japan and South Korea combined. Currently, the battery supply chain is heavily reliant on Asia, and predominantly China, particularly for battery raw materials, precursors and cathodes. This is the next piece of the puzzle that will need to be resolved.

Regionalisation of the electric vehicle battery supply chain is becoming more critical for the EV transition to occur at scale. North American and European OEMs are heavily reliant on Asia in the downstream (precursors-cathodes-batteries) and a select number of countries further upstream, such as the Democratic Republic of Congo and China for cobalt, and Chile, Australia and China for lithium. A number of drivers, including diversification of suppliers, ESG concerns around convoluted supply chains, and the importance of batteries being close to EV production (for freight cost and safety reasons), will drive a continued trend in regionalisation of battery supply chains.

As a result, we expect to see continued investment in both Europe and North America to reduce reliance on Asia, while also simplifying and improving the efficiency of supply chains. However, there are still several questions outstanding:

We will discuss these topics further in this Insight Series, looking at the cobalt and lithium markets in more detail and exploring market-specific supply chain risks. Part two in this series, focusing on cobalt, will be published soon.