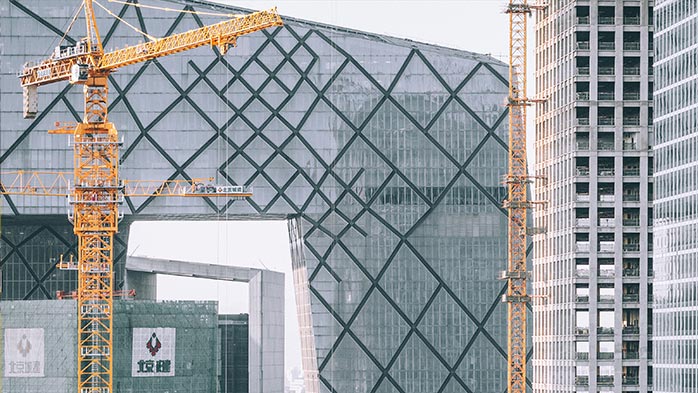 The real estate sector faces growing risk as Evergrande failed to discharge their repayment obligations. Elevated commodity prices pushed China’s PPI inflation to 13-year high. Local governments are poised to pick up spending on infrastructure projects, but this will not come through until 2022. The Chinese government is always balancing economic growth with other goals – over the next year they may need to lean more towards supporting the economy.

Fixed asset investment (FAI) in August contracted by 0.4% y/y, up from a 3.3% fall in July to post a growth of 8.9% y/y in the first eight months of 2021. Although floods and sporadic local outbreaks of the Covid-19 Delta variant have affected investment, FAI growth fell in the infrastructure, mining, and utilities sectors, slowing in manufacturing sector (left chart of Figure 1). 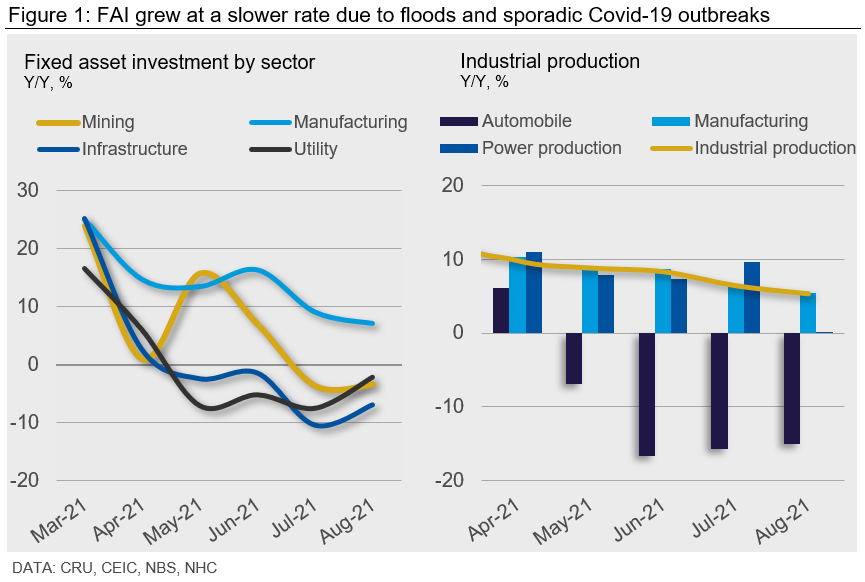 China’s manufacturing PMI dropped to 50.1 in August, the lowest value since last February. Industrial production grew 5.3% y/y in August after 6.4% in July. The power sector explains a large part of this slowdown, with growth decelerating sharply from 9.6% y/y in July to almost zero in August as the hydropower output declined by 4.7%. Although the manufacturing sector continued to face headwinds from rising producer prices and global supply chain disruptions, external demand from developed economies remained strong as retailers globally begin to restock their inventories ahead of the holiday season in Q4. Therefore, manufacturing output continued to grow at a resilient pace of 5.5% y/y in August from 6.2% in July (Figure 1, right-hand side).

Supply chain problems continued to roil China’s automobile in August, with output dropping by 15% y/y, almost as bad as July’s figure. China’s automobile sector has been mainly affected by the pandemic-induced bottlenecks in Malaysia and Vietnam (Figure 2, left-hand side). Whereas Chinese automakers, in particular electric vehicles producers, are more resilient to the semiconductor shortage because of flexible sourcing ability and relatively stable supply chains. China exported about 1.6mn automobiles in the first seven months of the year, up 112% from 2020. (Figure 2, right-hand side). Looking ahead, we believe export growth will ease in coming months due to a high base effect from 2020 H2. 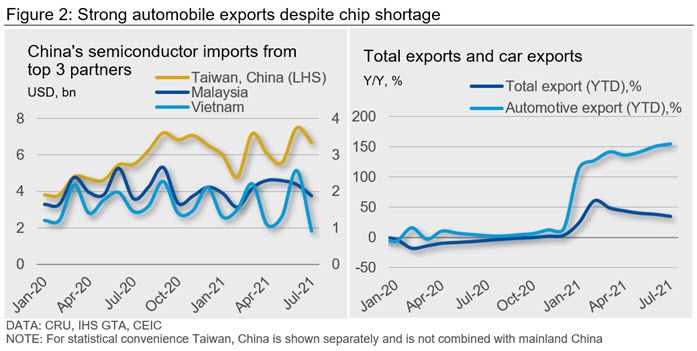 The real estate sector continued its downturn, as sales of properties plummeted by 15.5% y/y in August in floor space terms. Faltering sales and tightening financial constraints are forcing property developers to scale back new starts. Floor space starts of properties contracted for the 5th consecutive month, falling by 16.8% y/y in August. As our previous analysis has explored, the regulatory squeeze led to a temporary surge in completions but is reducing sales and starts. Floor space completions of properties rebounded by 28.4% y/y in August. That said, policymakers are unlikely to lose the grip on developer financing restrictions despite Evergrande’s recent liquidity crisis.

Producer price index (PPI) inflation again picked up slightly to 9.5% y/y in August, from 9.0% in July, as the partial port shutdown pushed up freight costs. The regulatory squeeze on carbon emissions has also curbed metal production, resulting in higher metal prices. Despite strong power demand driven by the economic recovery, tightening safety and environmental regulations have reduced thermal coal production in China amid the ban on Australian coal. These have all led to elevated PPI inflation (Figure 4). Looking ahead, we do not think the current surging thermal coal prices are sustainable; there should be a seasonal lull in demand, and domestic coal production should pick up. 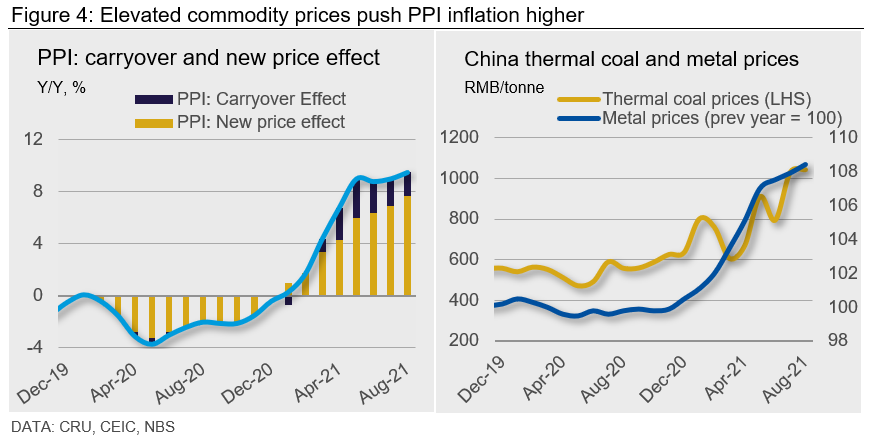 Retail sales, a key measurement of consumer spending in the world’s most populous nation, grew by a mere 2.5% y/y in August, down from the 8.5% increase in July. The recent resurgence of the highly contagious Covid-19 Delta variant has caused infections to rise in several Chinese cities. China will continue the zero-Covid approach for future outbreaks, e.g. tightening traveling measures due to the outbreak in Fujian province, which will likely dampen consumer confidence and travel appetite in the coming holidays. As such, the consumer price index (CPI) fell to 0.8% y/y in August, from 1% in July (Figure 5). 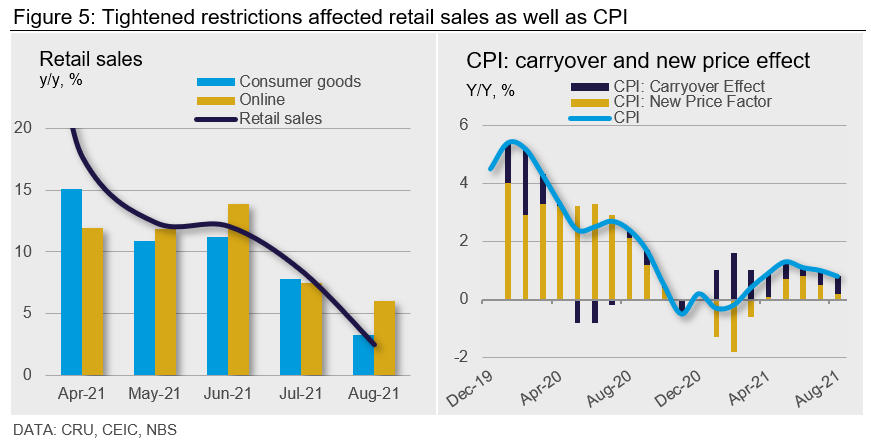 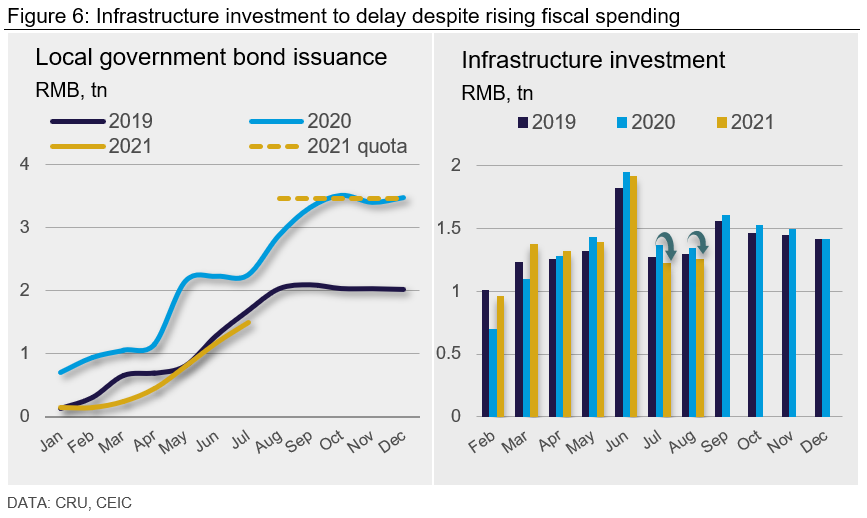 In 2021 H1, Chinese authorities have taken advantage of the economy’s rebound to tackle various economic risks, such as increasing controls on the property sector and property prices, strengthening technology sector regulation, pushing local governments to reduce both on and off-balance sheet debt, addressing climate change and energy transition, and pursuing Common Prosperity by reducing inequality and injustice. However, slowing construction activity, along with the faltering consumer recovery, will drag on earnings of SMEs and eventually weigh on manufacturing investment. With downside risks increasing, it is possible that PBoC will pre-emptively ease at the margin by cutting 5 bps RRR again or 5-10 bps policy rate before the end of the year.