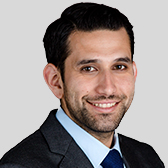 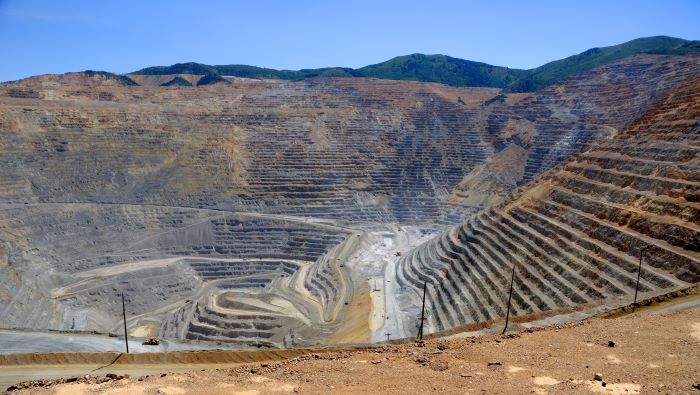 After more than a year since the initial Mining Royalty reform was introduced at the House of Representatives in March 2021, a proposal by the Executive branch presents a new tax structure for the industry, as part of the Tax Reform designed by the new administration.

CRU Consulting estimated the average effective tax rate for the large private mining industry at 59% for the 2024 – 2040 period, under the proposed scheme. This represents a significant increase from the current structure and from the latest proposal, which could reduce the industry value by 27%, measured by the net value of the free cash flow in the 2024 – 2040 period, compared to the current tax regime.

This could have an impact on the investment portfolios of mining companies and in new projects. Furthermore, the extended discussion period of the royalty legislative process could add uncertainty to the copper market, which requires investment decisions on new capacity to close the 5.1 million tonnes gap of primary copper that, according to CRU estimates, are required by 2030.

The new proposal structure has two tax components: i) ad valorem (over sales) component for producers of over 50 kt of copper per year, in a progressive scale dependent on copper price, and two tranches depending on the production level (50 and 200 kt); ii) a new component over the Adjusted Mining Operational Taxable Rent (RIOMA, its acronym in Spanish), which also varies according to the copper price and applies to producers of over 50 kt of fine copper per year. The proposal also repeals the existing Special Mining Tax.

What is the impact for the copper industry?

We evaluated and modelled the new tax structure on each mining operation in the large copper mining industry in Chile, excluding those operated by the state-owned Codelco, to analyse the impact the new law would have, which could partially come into force in 2024 (as the current tax stability agreements expire).

This analysis considers the diversity of the industry and how it could evolve, through a detailed analysis of production, costs, cash flow and life of mine. The operations included in this report represent ~4 million tonnes, or 71% of the total Chilean fine copper production as 2021.

We forecast the average industry would have a 50% effective tax rate in 2024 (calculated as total tax payments over EBIT), which would exceed 70% towards 2040, as higher production costs and lower productivity start to creep in on the industry, as shown in the figure below. We estimate an average effective tax rate of 59% for the 2024 – 2040 period. This compares with 43% of the previous proposal and 37% in the case of the current tax regime.

What is the new RIOMA component? It is a progressive tax over taxable rent, although it does not consider asset depreciation nor the recorded losses of previous periods, among other considerations. The rate is progressive depending on copper price and can reach up to 36% for copper prices above US$/lb 6.0, for producers of over 50 kt of copper equivalent. We see from our analysis that this component would be the most relevant for the industry, even exceeding the Frist Category Tax, and it would represent an average 48% of the total tax payment of mining companies in the said period. 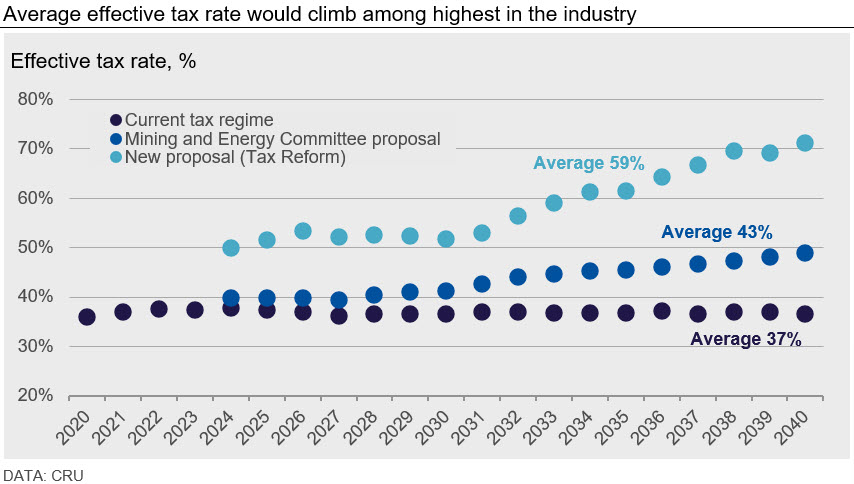 An additional way of estimating the impact is through the valuation of the mining industry, measured as the present value of the free cash flows from the different producers. On aggregate, we estimate this value would reduce by up to 27% with the new royalty proposal, while the reduction would be 3% with the proposal previously approved by the Mining and Energy Senate Committee. This means the assets would reduce their value, thus making the investment decisions more complex to make. Particularly, new projects could see a significant impact on their rate of return, which could lead to investment decisions such as life of mine extensions, cost reductions, efficiency improvements and, above all, new production capacity (both brownfield and greenfield) to be delayed, cancelled or reassessed. 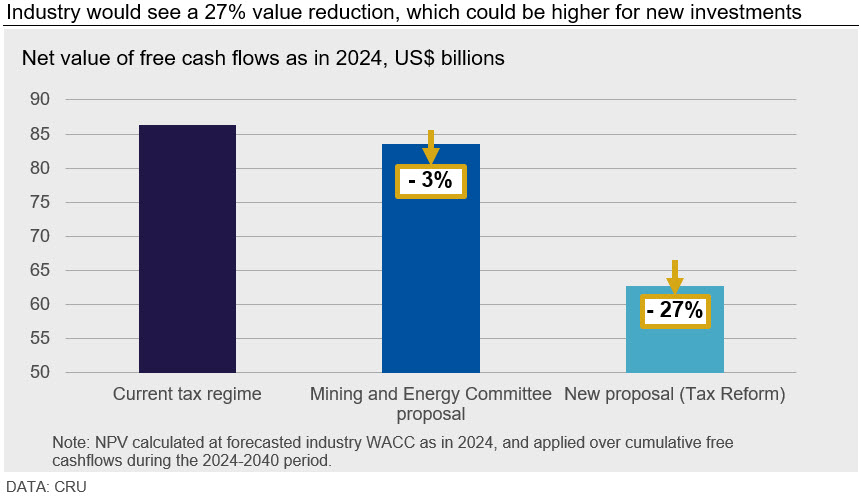