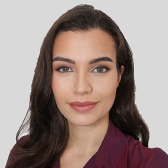 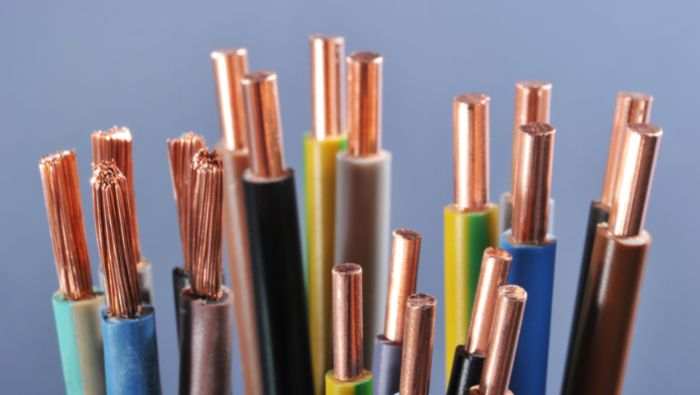 The following report is comprised of excerpts from a recent UK Country Profile, a feature of CRU’s Wire and Cable Market Outlook service.

Please note that a more detailed version is available to subscribers of CRU’s services.
For more information, please contact aisling.hubert@crugroup.com 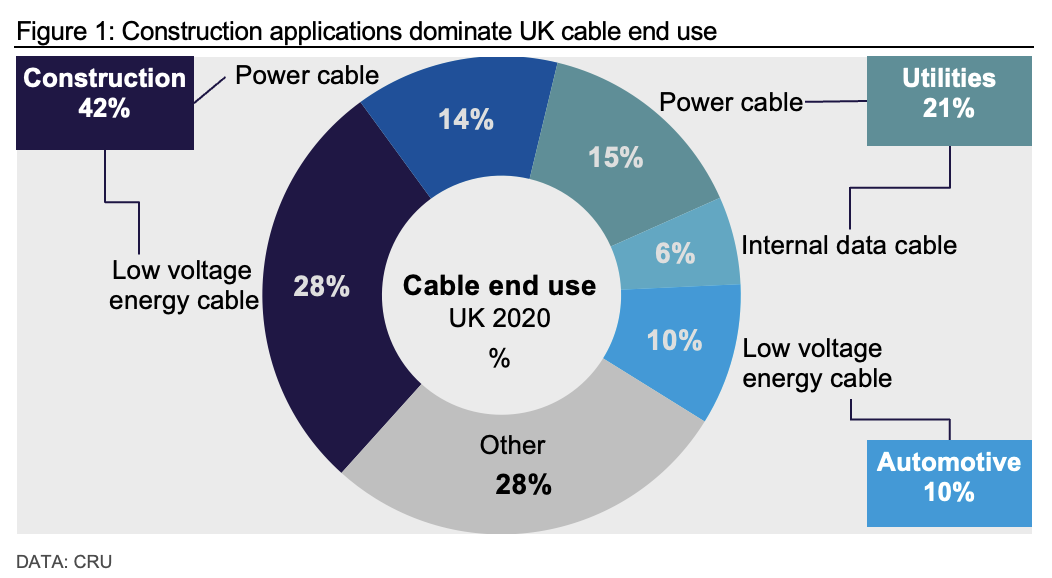 Major driving factors of wire and cable consumption within the UK include high levels of residential construction, large national infrastructure projects, as well as power network upgrades to accommodate a growing population and increased electrification due to the green energy transition.

UK wire and cable demand has rebounded strongly after the Covid-19 pandemic. As of 2020, annual demand had fallen by roughly 10%. 2021 saw this demand recover to near pre-pandemic levels.

Construction output in the UK is more than £110 billion per annum and contributes 7% of GDP. Approximately 60% of construction output is new build, while 40% is refurbishment and maintenance. This sector is made up of three key areas:

2022 Q1 saw construction project starts decline by 24% y/y and 8% down versus 2021 Q4. This was even higher for residential work which was down 32% y/y. This drop has been attributed to the ongoing raw material and energy cost crises as well as persistently disrupted supply chains due to lingering effects of the Covid-19 pandemic and the war in Ukraine, as well as unprecedented demand in 2021 Q1 due to demand rebound.

Though output in 2022 Q1 was up 4% overall, construction starts have declined dramatically. This is indicative of a long-term pessimistic sentiment in the sector as old projects are completed despite little pledging of new projects due to expected future supply chain difficulties.

Overall, LVE cable demand within the UK is expected to experience a growth rate of 4% y/y in 2022. This comparatively strong growth is forecast to slow to an average CAGR of 2% y/y for the period 2023–2026. Should pessimism surrounding construction sector strength prove correct, it is likely that this forecast will experience a revision to the downside.

Infrastructure, which accounts for 18% of UK construction, is traditionally less affected by immediate economic conditions. Large projects such as HS2, Thames Tideway and Hinkley Point C – combined with the five-year spending plans in regulated sectors such as rail, road, and power generation – help to sustain some positive growth in this sector.

Power cable accounts for 31% of the UK’s total wire and cable demand as of 2021. Of this, 65% is copper power cable, and 35% is aluminium power cable. This ratio of power cable types is relatively stable and minimal substitution of aluminium for copper is forecast within the UK. 46% of UK power cable is used in utilities, with most of the remainder incorporated into construction projects.

The UK national grid network covers the majority of Great Britain and several of the surrounding islands. It does not cover Northern Ireland, which is part of a single electricity market with the Republic of Ireland.

The national grid invests around £1.3 bn each year to develop its transmissions network. It is expected that total electricity demand could double by 2050.

At present, many new renewable developers are facing waits between six to ten years to connect to region distribution networks due to constraints on the National Grid’s network. As part of the UK’s Energy Security Strategy unveiled in April 2022, the government has pledged to “reduce timelines for delivering strategic onshore transmission network infrastructure by around three years” – roughly halving average processing times. The National Grid says it has historically had 40–50 applications for connections in a year, but that this has risen to about 400 as renewables suppliers have proliferated.

As part of the UK’s drive to reach 100% clean energy by 2035, the UK has a number of plans to expand its interconnectors. Existing interconnectors with France, Belgium, and Norway already supply roughly 10% of the UK’s electricity – a figure that could double by 2026, with multiple others under construction or in development. 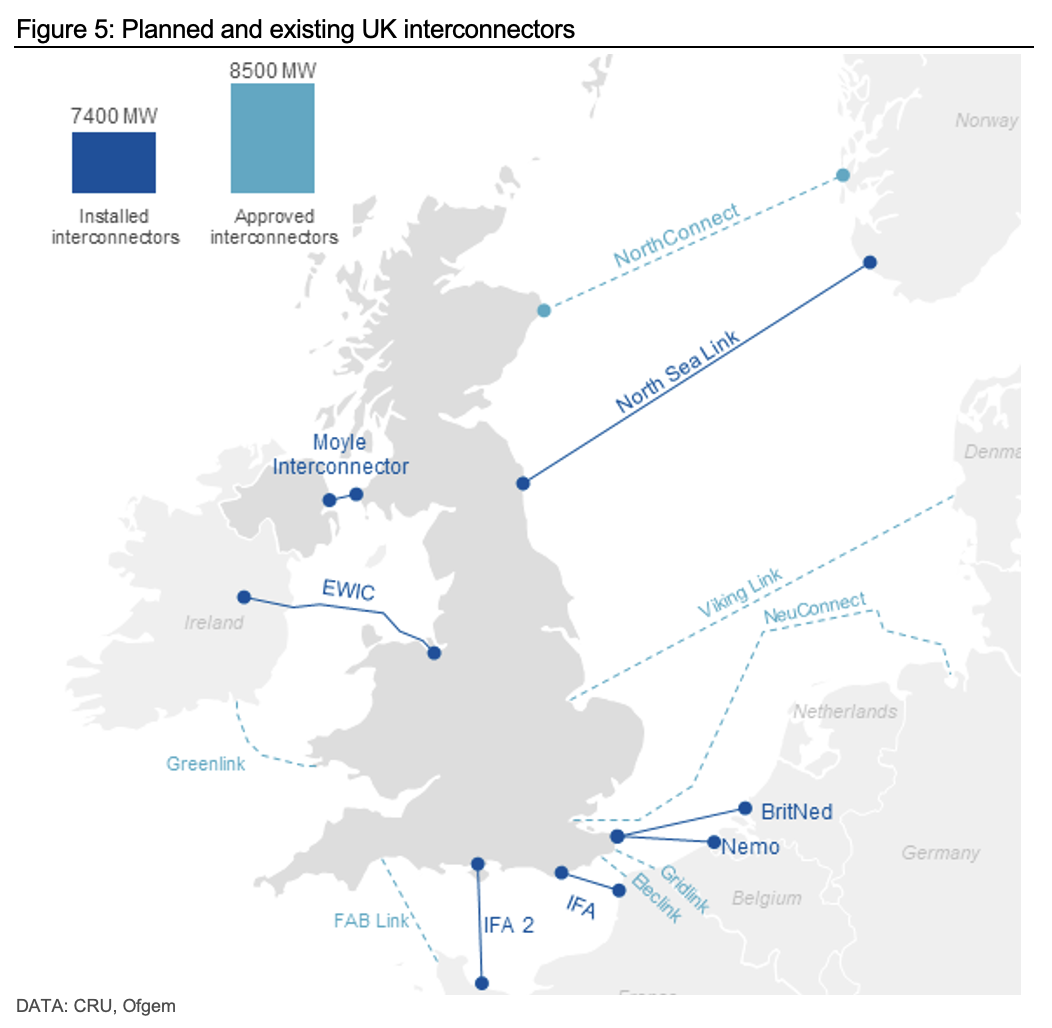 The UK hopes to realise at least 18 GW of total interconnector capacity by 2023. This will require an additional 4,100 MW of interconnectors on top of existing and approved projects.

At present, roughly 41% of the UK’s generated energy is derived from fossil fuels, 25% is derived from renewables (hydropower, solar PV and wind), 25% from nuclear, with the remaining 9% shortfall derived from imports via interconnectors.

Wire and cable is used extensively in all the major renewable technologies and as a result, the ongoing energy transition is key to our medium and long-term forecasts. Indeed, CRU estimates that offshore wind consumes over nine times as much wire and cable compared to that of natural gas per gigawatt capacity installed. Although less intensive, solar PV and onshore wind also consume significantly more cable compared to traditional energy sources.

Of the UK’s renewable energy, roughly 80% is wind. The UK is considered a world leader in the implementation of wind power, with the largest global offshore wind capacity as well as the sixth largest total wind power capacity (onshore & offshore). As of March 2022, the UK had over 11,000 wind turbines producing a total capacity of over 24 GW, 14 GW of onshore capacity and 10 GW of offshore capacity. Roughly 20% of the UK’s power generation currently comes from wind power.

As part of the country’s Energy Security Strategy, the UK has pledged that by 2030 it will have a total installed capacity of 90 GW wind power (50 GW offshore, 5 GW floating offshore, 35 GW onshore). This will represent an additional wire and cable demand of roughly 3,000 kt conductor over the period 2022–2030. 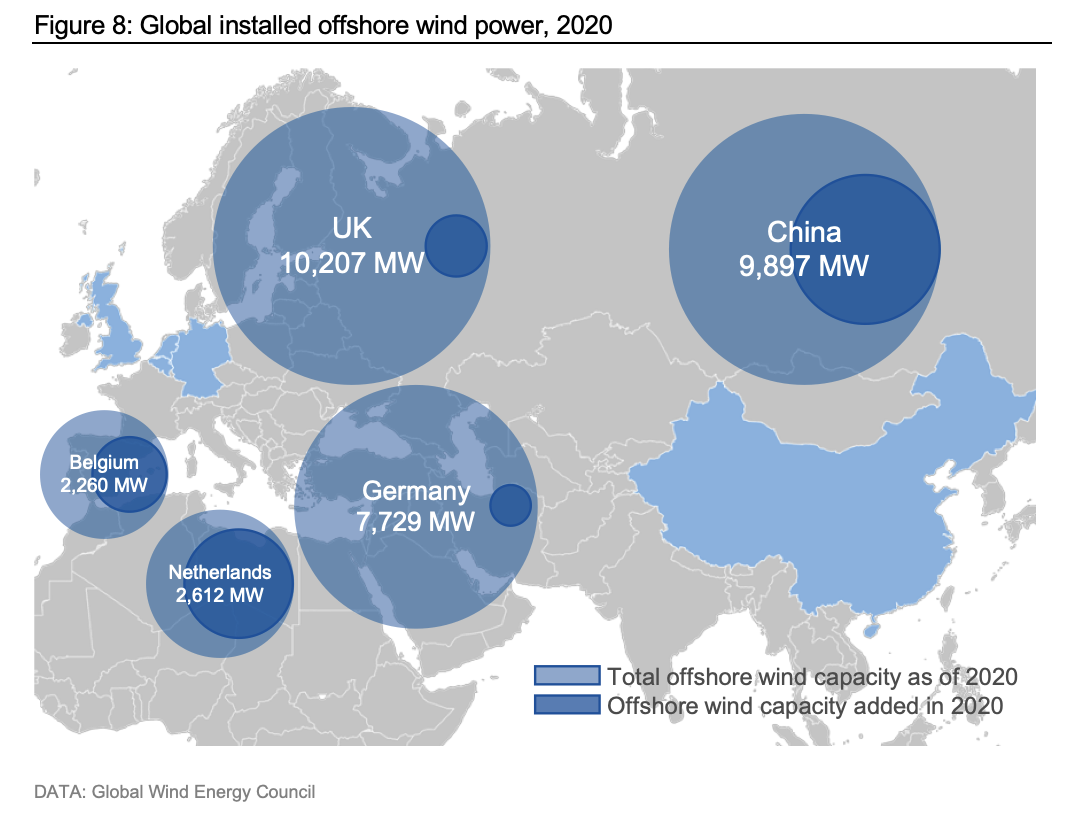 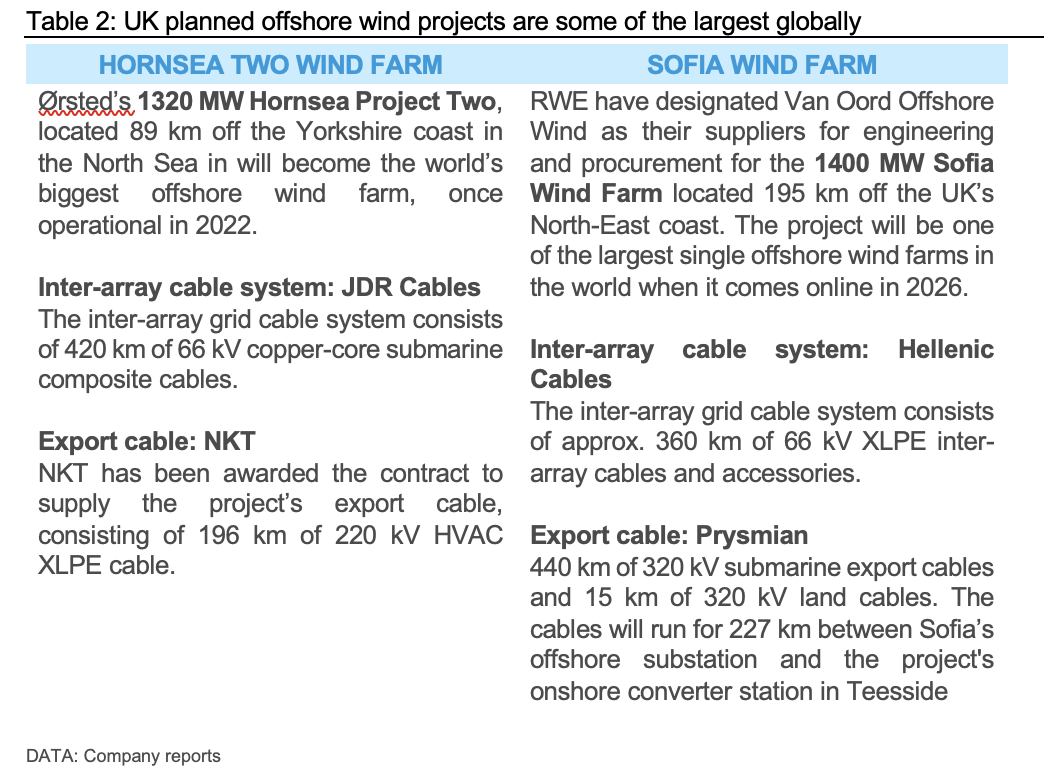 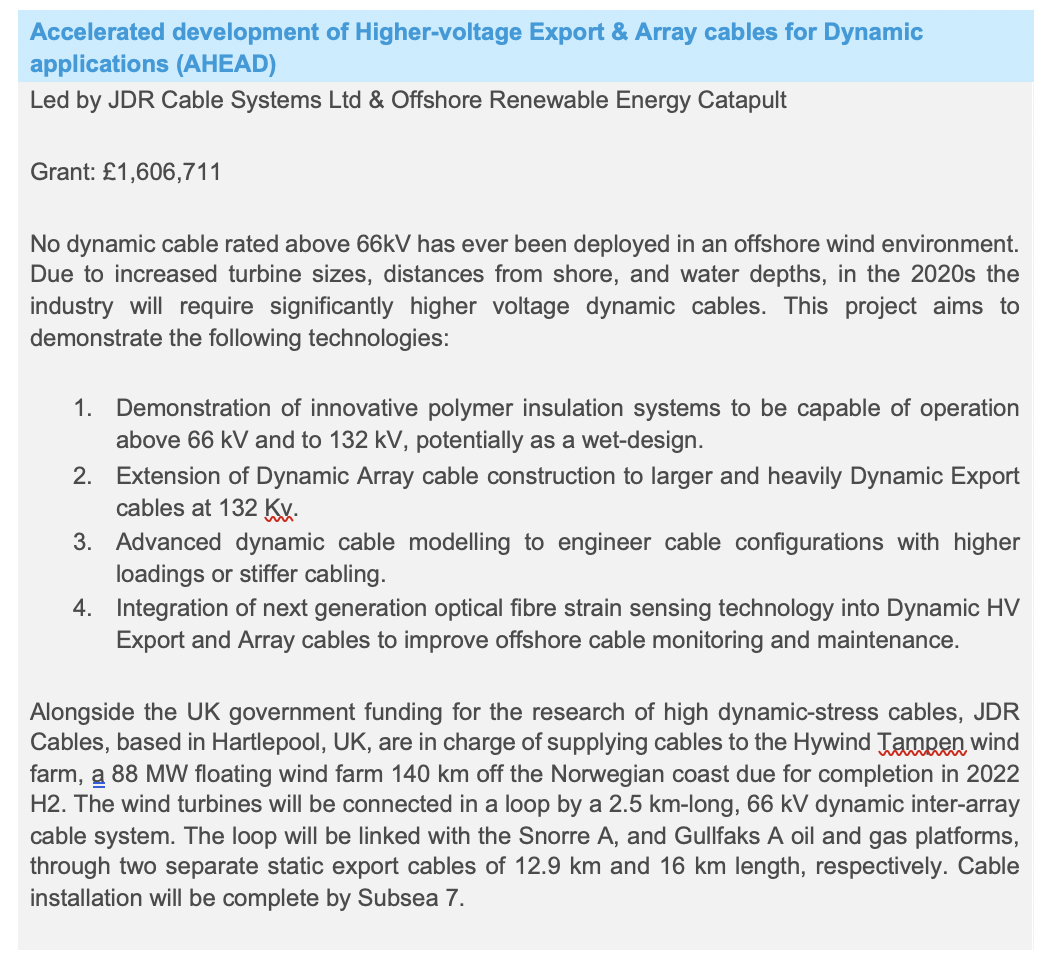 As of the end of February 2022, there were more than 780,000 plug-in vehicles with approximately 420,000 battery electric vehicles (BEVs) and 360,000 plug-in hybrids registered in the UK. 2021 saw the biggest annual increase in number of registrations, with more than 305,000 electric vehicles registered – a growth of 74% y/y. In 2022 Q1, BEVs and plug-in hybrids represented roughly a quarter of new vehicle registrations.

In April 2022, the UK new car market declined by 16% y/y compared to April 2021 – but battery electric car registrations bucked the trend, up 40.9% y/y. This is a trend that is set to continue as the UK hopes to reach its national decarbonisation goals.

The Climate Change Committee has estimated that to facilitate the transition to a net-zero transport sector, 49 million vehicles will need to be battery electric or hybrid by 2050, up from 858,000 as of May 2022 (2.1% of all UK vehicles). It is estimated that 325,000 public charging points would be required to service national demand. As of May 2022, there were approximately 32,000 public charging devices.