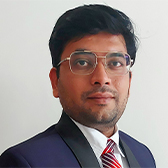 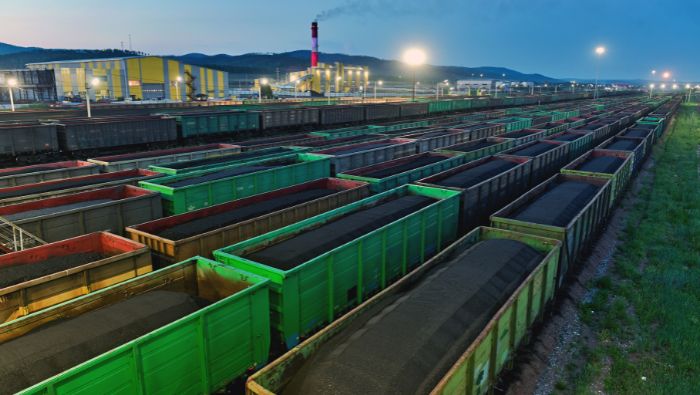 During October and November 2021, India experienced significant power outages as the country ran short of coal with stock levels falling to historical lows. Through 2022, with the exception of some shortages in April, India has managed to maintain sufficient coal stocks at power plants, even throughout the monsoon season, and thereby avoided major power shortages seen last year.

In this Insight, we will look at the actions taken by India’s largest coal producer, Coal India Limited (CIL), and by power plants and the Indian government which have led to sufficient stock availability at power plants. We will also talk about how India’s thermal coal trade flows have changed since the start of the war in Ukraine.

Indian monsoon season typically starts in June and lasts until end-September or early-October. During this time, there is heavy rainfall in most parts of India, starting in the southwest and then sweeping up north and east. The eastern part of the country, where the majority of coal mines are located, sees heavy rainfall during the last two months of monsoon season and thermal coal production and dispatches are normally severely reduced during that time.

Despite a y/y increase in coal production by CIL during the 2021 monsoons, the coal stocks at power plants kept falling throughout the season. India’s post-pandemic economic recovery was greater than expected, leading to a strong electricity demand that resulted in coal-fired power generation growing by 13% y/y in the Apr-Oct 2021 period. Logistical issues due to monsoons also constrained coal supply, despite there being enough pithead coal stocks available at CIL. Furthermore, thermal coal imports during the Jun-Sep 2021 period were down by 4% y/y as some buyers turned away from the import market due to the sudden surge in prices in the seaborne market during this period compared to Jan-Apr 2021.

Consequently, the total coal stock at power plants fell to just four days of consumption with 16 power plants having zero inventory by the first week of October 2021. As a result, several states saw coal-fired power plants shut down due to coal shortage and India recorded a power supply shortage of ~1,200 MWh in October 2021 with many households in northwestern states facing power cuts.

Furthermore, in April 2022, many cities in the northern part of India faced power outages and some industries were forced to shut their operations temporarily. The poor stock planning by generators, the intense heat wave and logistical challenges resulted in failure of power generators to meet peak demand. 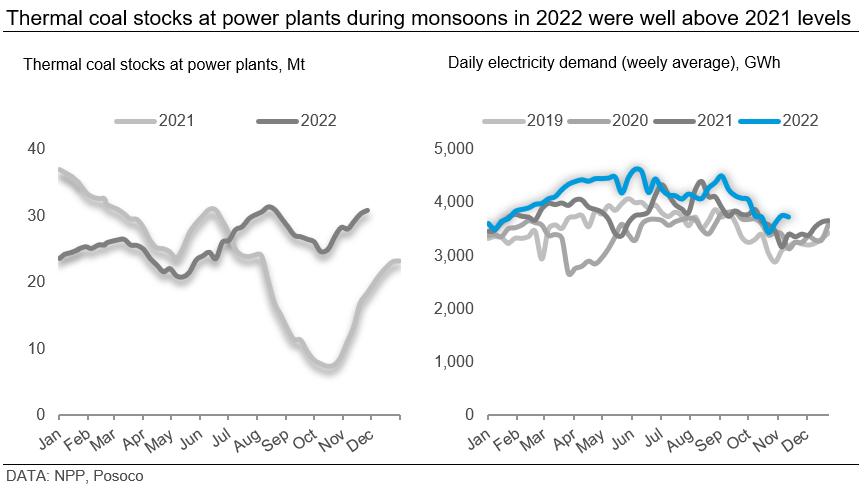 To avoid a similar situation during the 2022 monsoon season, the Ministry of Power (MoP) in May 2022 mandated all coal-fired power generators to use 10% of imported coal in their input coal blend and allowed them to pass on higher coal costs to consumers. Additionally, the Ministry of Power also intervened to ensure a timely release of payments by distribution companies to power generators, which in turn improved their liquidity to place import tenders. Therefore, coal imports rose sharply in 2022 Q2 as shown in the chart below. While imports have subsequently fallen from Q2 highs, they remained higher y/y, resulting in 8% y/y growth during Jan–Oct 2022.

At the same time, coal production by CIL has been rising with the increased capex on the coal supply chain and usage of newer mining technologies, leading to 12% y/y growth in the Jan-Oct period.

Nevertheless, CIL faced issues with the delivery of coal to consumers and thus coal dispatch grew by only 7% in the same period. 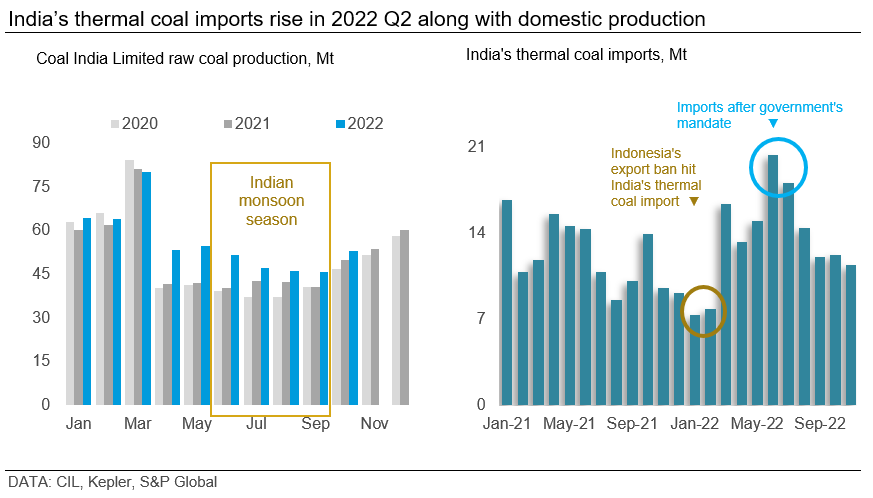 In addition to increasing coal production, the company also awarded a contract to Indonesian firm Bara Daya Energi for procurement of 6 Mt of imported thermal coal over the next year to meet the rising needs of power producers.

However, in the middle of August 2022, when stocks at power plants reached 31 Mt, the Indian government relaxed the earlier mandate for usage of imported coal in blend. As a result, import volumes declined in September to November.

Despite imports falling from their peak in 2022 Q2, coal stocks have been rising due to seasonally weaker demand and improvement in coal dispatches by CIL, which rose by 3% y/y in the Jul-Nov 2022 period. Consequently, coal stocks were at 30 Mt by end-November. 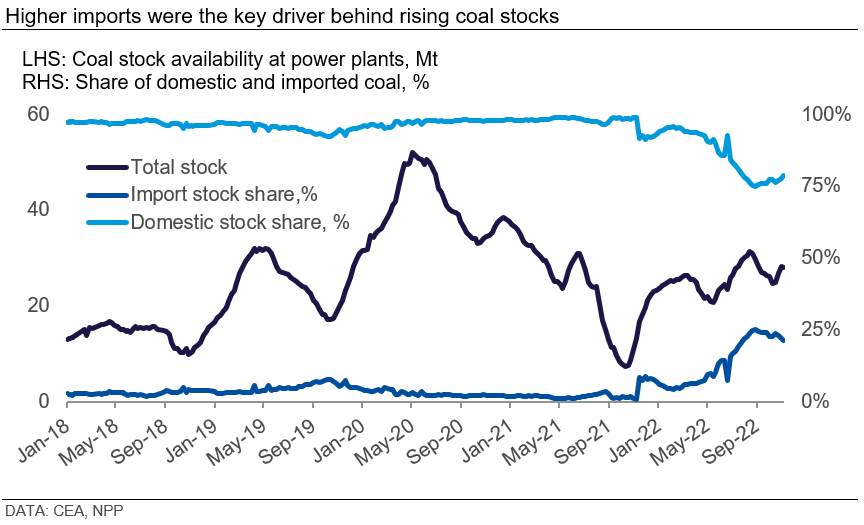 Strong growth in Indian thermal coal imports this year has been primarily driven by higher imports from Indonesia, as well as from Russia and Mozambique, while import volumes fell from all other key suppliers, like South Africa, Australia and the USA.

Falls in imports from these suppliers have been primarily caused by supply and logistical constraints from those countries. Australian coal production has been severely impacted this year by extremely wet weather, which has resulted in the country’s exports falling to multi-year lows. Total South African exports have also been down this year due to poor railway performance, but the particularly large drop in sales to India has been the result of South African sales being redirected to Europe. US exports have also suffered from railway constraints and have also been redirected to Europe.

A significant 293% y/y rise in imports during Jan-Nov 2022 from Russia resulted from a European import ban on Russian coal. Russia has been looking for new customers and has been offering large discounts compared to other seaborne suppliers.

Overall, Indian buyers had to rely more on Indonesian coal imports this year. Thus, India’s imports from Indonesia surged by 35% y/y during Jan-Nov 2022 even despite the Indonesian export ban in January 2022. 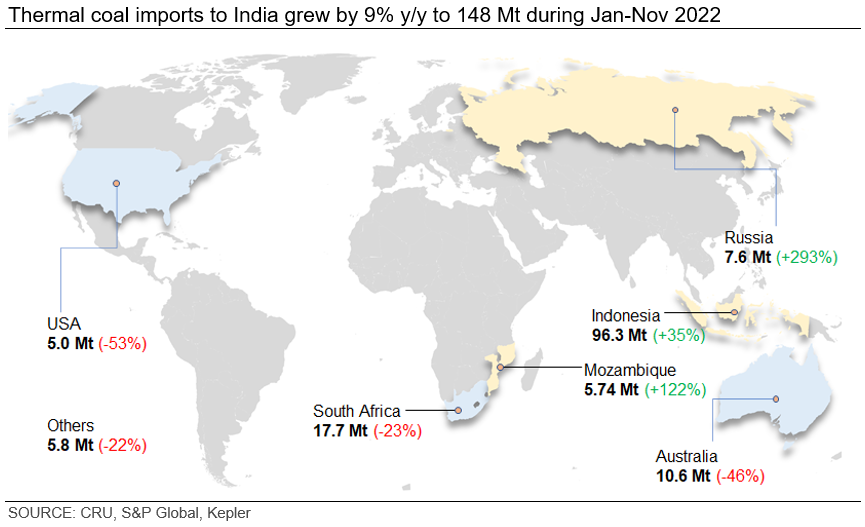 In 2023, CRU forecast India’s electricity demand to grow by 6% y/y, while coal fired generation will grow by 4% y/y. To avoid the repeat of coal shortage and power cuts situation of 2021, the government is planning to build up coal stocks at power plants to 45 Mt by current fiscal year-end on 31 March 2023, which will be the highest level since April 2020, during the Covid-19 lockdowns.

Reaching this coal stock level with domestic supply only is highly unlikely. While coal production in India has been growing strongly, growth in coal deliveries has been substantially lagging behind. For instance, during Apr-Oct 2022, India’s coal production grew by 18% y/y, while coal dispatches grew only by 8% y/y. This has been the result of logistical issues, such as limited rakes availability and rail line congestion.

While coal dispatches are expected to improve in the coming months due to numerous steps taken by the government to improve logistics, the target of building 45 Mt of coal stocks in the next four months looks unachievable without stronger imports. Consequently, Indian thermal coal imports are likely to rise over the coming months from current levels.