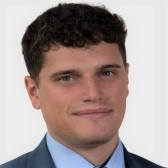 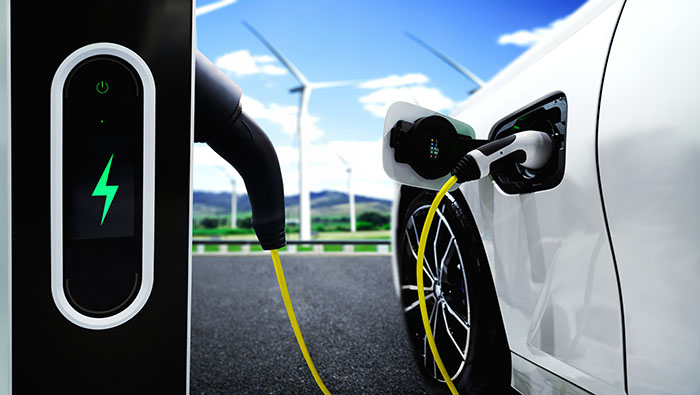 Rare earth permanent magnets (NdFeB magnets) are crucial to the development of a green economy due to their use in electric vehicles and wind turbines. As demand for NdFeB magnets continues to grow rapidly, opportunities to establish new supply chains emerge. However, at present magnet production outside of China is hardly economic, with low Chinese labour and electricity costs - further supplemented by existing state support – allowing Chinese magnet makers to force razor-thin margins on global competitors.

As such, sizable government support is a major element in  helping non-China magnet production grow, and thereby key in developing a geopolitically secure supply chain. Governments (principally the U.S., EU, and U.K.) are taking steps towards developing future supplies of rare earth magnets outside of China. Within Europe, the EU and U.K. are following similar paths in the development of strategy and policy regarding rare earths. The EU established the European Raw Materials Alliance (ERMA) whilst the U.K. is establishing a critical material expert committee – both of which are comprised of industry and government members. There exist several facets of financial support, though these funds are generally designated for a wide array of minerals and products crucial to the green transition. The U.S. is following a more direct approach than the EU and the U.K. by providing financial support directly to rare earth magnet makers, and even through placing restrictions on rare earth products purchases for national security related usage based on the origin of contained rare earth material.

Several routes of production exist within the rare earth magnet supply chain,  most of which is occurs in China. The rare earth magnet used most across the globe is the NdFeB magnet, or neodymium (Nd) iron (Fe) boron (B) magnet. These magnets require not only neodymium praseodymium alloys (NdPr), but also Dysprosium (Dy) and at times Terbium (Tb), which are added to maintain performance at higher temperatures.

In the production of NdFeB magnets, magnet material (NdPr and Dy alloys) is initially produced via processing and separation of rare earth ore, and subsequently fed into magnet plants to produce magnets. An overview of the NdFeB magnet value chain is outlined below: 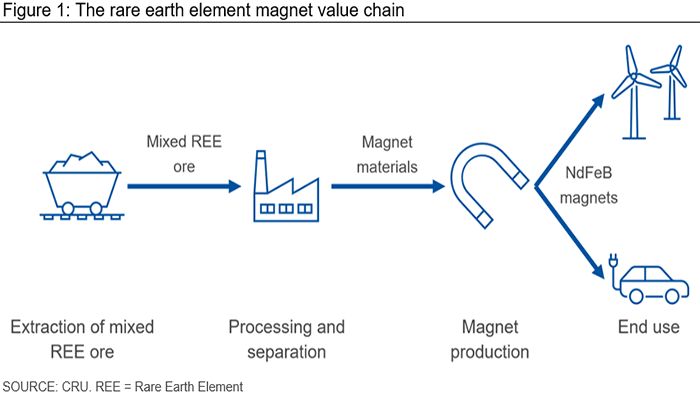 The dominance of China within the rare earth market is well documented. Significant Chinese capacity coupled with low magnet production costs make China difficult to compete with. State support for Chinese magnet producers in the form of a 16% VAT rebate gives Chinese producers the upper hand in the magnet making market. Such subsidies account for a large share of the competitive advantage - compounding on existing market advantages in cheap labour and electricity. Our analysis indicates that subsidised Chinese producers have costs of production up to 35% cheaper than non-China producers,  with labour and electricity costs up to 50% per kg magnet lower in China compared with non-China producers.

This has led to lacklustre investment outside of China, as standard economic conditions on suitable markets meant non-China producers would struggle to meet any return on investment greater than other downstream opportunities. In fact, existing producers in Germany and Japan have displayed difficulties in expanding their magnet making capacity. Neither market or state provided the signals nor support required for such investments to make sense. Now that the market tightness is beginning to raise anxieties about supply security, the status quo might change. 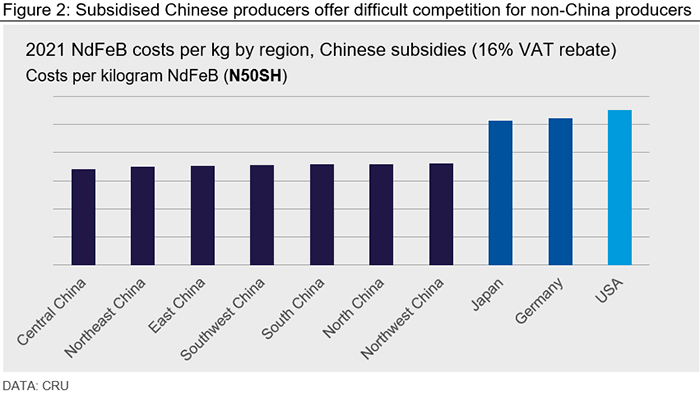 The U.S. recognised the issues facing rare earth magnet supply chains and on 8 August 2021 the HR5033 bill, ‘Rare Earth Magnet Manufacturing Production Tax Credit Act of 2021’, was introduced to the House of Congress. HR5033 is significant in that it proposes two subsidies to U.S. rare earth magnet producers, producers which at present do not exist.

Comparison between U.S. and Chinese producers (figure 2) shows that U.S. producers would be on average ~$30/kg more expensive than Chinese producers, a cost difference echoed in most non-China supply, indicating the need to bring non-China supply costs down to competitive levels. The HR5033 bill is informed in its approach to stimulate the U.S. magnet market and introduce non-China supply chains, a $30/kg subsidy would reduce U.S. costs by 40% and place the U.S. producers at Chinese cost levels. The quantitative impact of the proposed U.S. subsidy is shown below in figure 3. 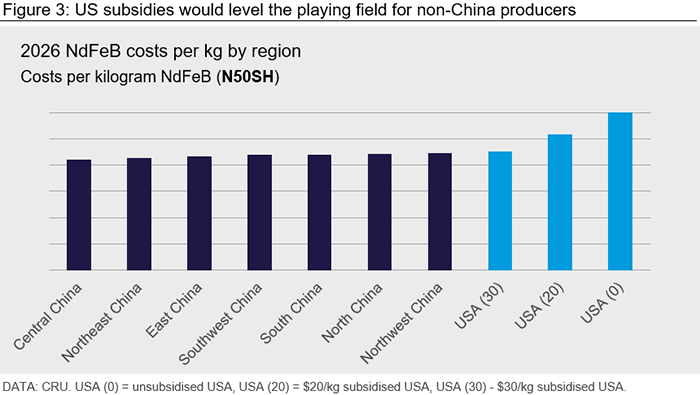 The subsidy proposed is highly targeted, with eligibility for the subsidy dependent upon material sourcing, if any material is sourced from non-aligned nations (China, Russia, and Iran as examples) then the magnet producer is not eligible for the subsidy. Such eligibility criteria has the potential to significantly impact the magnet producing value chain, both in the U.S. and abroad.

At present, no established rare earth magnet manufacturers exist in the USA, resulting in almost complete reliance upon China to access rare earth magnets. Whilst non-China suppliers (Germany, Japan and South Korea) do exist and are utilised, capacity is restrained in growth outlook and thereby increasingly insufficient to prevent bottlenecks in supplying explicit non-China demand, a rising concern amongst OEMs. The bill aims to mitigate the risk of potential geopolitical instability by limiting China’s ability to undermine non-China consumers with bans on exports during periods of tension.. By restrictive criteria to not allow Chinese-sourced material two immediate impacts would be expected:

With two nations (China and the USA) seeking to subsidise magnet production, other non-China nations could look to provide U.S-style subsidies themselves to adapt to a new magnet making market, in turn ensuring subsidies become a market norm. Equally, other nations may look to incentivise the closed-loop recycling of magnets, with a focus on a more circular economy.

Recent developments in the U.K. include planned construction of two rare earth separation plants adjacent to freeports, such developments raise the idea of a more holistic approach to the magnet market whereby no direct policy is needed for rare earths, instead companies can take advantage of existing tax incentives.

Companies within ERMA may look to lobby EU policy in the future, a collective effort towards driving competition in the magnet making market. Recent work undertaken by the EU appears recycling and design focused in its approach, with DEMETER, an EU training network for magnet motors, aiming to improve both recycling and production of rare earth magnets – with a life cycle assessment focus. As such, it may be that the EU is seeking innovation over incentivisation in the case of rare earth magnets.

The proposed U.S. subsidy raises questions as much as it seeks to answer the question of supply stability for consumers within the rare earth magnet market. On one hand, the subsidy has the potential to establish a new U.S. market and drive competition with Chinese producers on like terms. On the other hand, questions are raised regarding whether the magnet making market is heading towards the path of a subsidised market – with further questions raised concerning the duration of subsidies and those expected to foot the bill.

Talk to CRU – our expertise is at hand

When it comes to rare earths, CRU is one of the world’s leading research and consultancy firms in the market. We have dedicated a wealth of resources to analysing and tracking these markets in recent years, including the development of long-term automotive and renewable demand modelling, supply cost modelling and price forecasting across a range of rare earth elements. We have worked closely with a wide range of industry participants that includes established miners, aspiring projects, investors, and regulators in order to improve market understanding of these elements and in turn refine our own knowledge and modelling capabilities. In addition to this, our dedicated teams of analysts and consultants in Shanghai and Beijing give us strong insight into the rare earths market which is unavailable elsewhere. If you would like to discuss any of the issues raised within this Insight with a CRU expert, contact our experts Matthew Burford and Daan de Jonge.