Sanctions against Russia are nearly certain if an invasion of Ukraine occurs.

The White House briefed the press on 25 January. The message was not if sanctions would occur or not, but rather “the size of the financial institutions and state-owned enterprises that we’re willing to target, the severity of the measures that we’re contemplating, the immediacy of the effect of sanctions that we’re preparing.”

Metals have not been singled out, and it is unclear if companies deemed close to the Kremlin could face sanctions.

Given how low inventories are across copper, nickel and aluminium, sanctions against Russia would likely send prices substantially higher. The energy exposed commodities (aluminium and zinc) would rally more than copper, given the impact on gas and energy costs in Europe and the risk of smelter closures.

Platinum and palladium are a risk, but in the past the US has been hesitant to sanction anyone related to the palladium supply chain, given Russia’s very large market share.

Aluminium, nickel and copper face a larger risk of sanctions by that measure and given that all three markets are very tight, this could be a big issue. It is worth noting that Russia has had an export tax on these metals through 2021 Q4, which ended on 1 January. This did not disrupt the market greatly, but it was always likely to be a temporary tax and the material could still flow out of Russia.

Another risk to consider is logistics. If Russia is exporting via the Black Sea, then even without sanctions we could see disrupted supply chains if there is conflict. 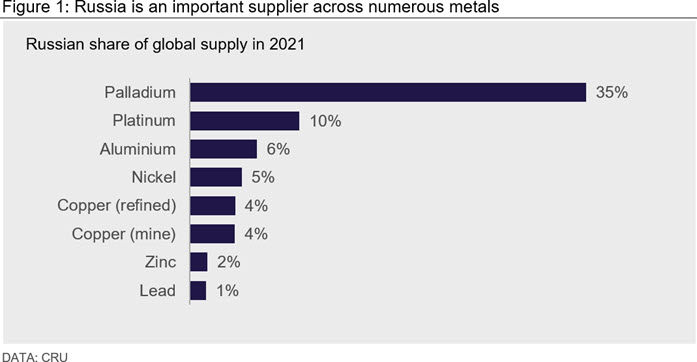 Lessons from the UC Rusal aluminium sanctions in 2018

Once sanctions are in place, a company can be blacklisted by financial institutions around the world. Doing business with a sanctioned company is too risky for banks, as they could face enormous fines.

The US learnt that sanctions against a raw materials supplier can be very disruptive to manufacturing around the world. You cannot easily disentangle supply chains and have a clear picture of which industries may be impacted by sanctions. For instance, UC Rusal has a large alumina refinery in Ireland. The halting of shipments from that refinery to aluminium smelters in Europe was nearly as disruptive as the halting of metal exports from Russia.

To limit disruptions to manufacturing, it is highly likely that any existing contracts would sit outside of sanctions. This will likely be the case but is not certain. There are some potential problems though which can be difficult – the Russian company may not want to supply, if they feel that accessing the cash payment is too burdensome or risky.

It is important to note that lawmakers initially underestimated the impact of the UC Rusal sanctions, and it was only after substantial lobbying that rules were tweaked. Metal inventories are so low today that a replay of that error would be explosive for prices.