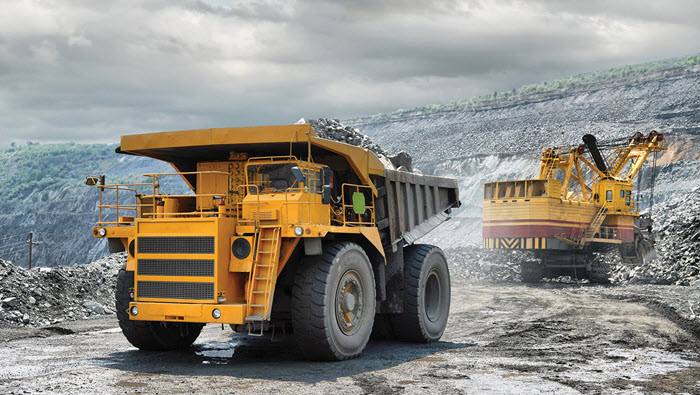 North America’s EV makers are dependent on overseas producers of both EV batteries and their constituent materials. Given the recent experiences of trade restrictions, the Covid-19 pandemic and global semiconductor shortages, North America’s automakers are seeking to regionalise their supply chain. Lessening dependence on the imported raw materials that go into making battery cells – lithium, nickel, cobalt and manganese – is easier said than done given that, of these metals, only nickel is currently produced in abundance in North America. Further, producing nickel in a ‘green’ manner, consistent with lower carbon emissions and evolving ESG principles, adds another layer to the challenge in regionalising the supply chain.

CRU estimates that the global demand for all light duty vehicles (LDVs) in 2020 was just over 79 million units. New energy vehicles (NEVs) – which includes plug-in and fuel cell power trains – totalled 3.35 million units. By 2030, annual global demand for NEVs is expected to increase more than ten-fold to 31.2 million units.  Of that, North America is forecast to produce just under 6.5 million NEVs, or 21% of the global total. This drastic increase in EV production is creating a scramble for raw materials, most crucially the metals that are used in the production of the cathode. 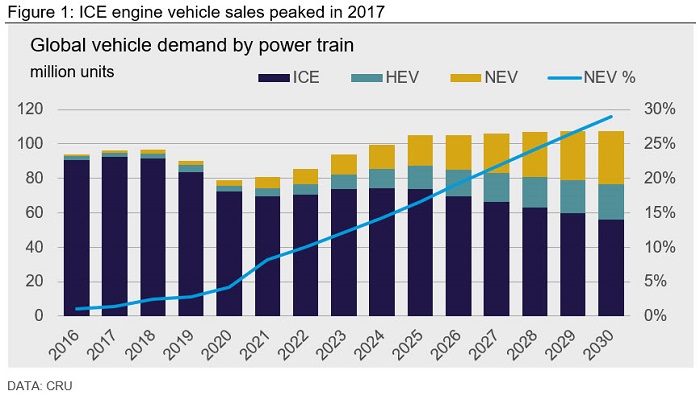 The production and sale of millions of EVs will require a massive increase in the production of lithium-ion battery cells. Historically, most automakers have relied on cells produced by third parties, companies such as Korea’s LG Energy Solutions, Samsung SDI, SK Innovation, Japan’s Panasonic, or China’s massive cell manufacturer CATL. Although Tesla makes its own battery cells in the US, it imports the cathode materials from Japan. More recently there has been a rash of announcements of new battery making capacity coming on stream in the region during the next five years from Ford, GM, Stellantis, Rivian, Toyota, and UK producer Arrival, with many of these involving partnerships with established battery manufacturers. Critically, it is unlikely that all these cell manufacturing plants will also incorporate integrated precursor (PCAM) and cathode active material (CAM) capacity, and it is at the PCAM step that the nickel and other cathode raw materials (lithium, manganese, cobalt) are consumed. If the PCAM is imported, then the consumption of the cathode raw materials will remain outside of North America.

In a positive development for alleviating this supply chain gap, GM has announced intentions to backward integrate into battery and PCAM production via a joint venture with South Korea’s Posco Chemical. Tesla has also mentioned plans to develop PCAM production facilities within the USA, although details are scant.

PCAM production in turn requires nickel in the form of nickel sulphate1, but minimal NiSO4 production capacity exists in North America; little additional capacity is currently planned, with none that is at an advanced stage of development.1

1 Excluding lithium iron phosphate (LFP) and some other cathode formulations which contain no nickel. Tesla and some other companies have discussed potential plans for PCAM production using nickel metal powder rather than NiSO4, but at present all PCAM facilities use NiSO4, and high-nickel cathodes are expected to dominate in the North American market.

The figure below traces the nickel supply chain from mine to EV and includes materials that are integral to the battery chemistry. North America produces a significant volume of mined and finished nickel products, but nonetheless lacks a full supply chain to cells and EVs – in particular missing the nickel sulphate and precursor-cathode active material (PCAM & CAM) stages in the process, as mentioned above. 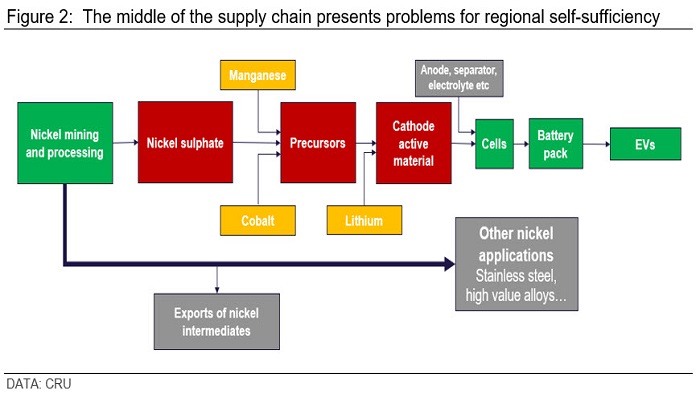 Total self-sufficiency for North America in battery materials would likely require new mine supply and/or a major shift at incumbent operations to produce NiSO4 instead of the metal products they produce currently (which may be high value-added products which achieve a greater premium than NiSO4). North America’s largest nickel producer, Vale, has stated a non-specific intention of supplying Tesla, which could be an important step towards the recalibration of upstream supply chains to better serve the growing North American battery and EV sector. However, apparent NiSO4 and PCAM investment in the region severely lags the potential requirements for lithium-ion battery cells and EVs. Without this capacity, cell production will remain dependent on imported PCAM (or imported NiSO4 if PCAM is developed without battery chemical capacity), dominated by Chinese and Indonesian suppliers. Without this investment in the midstream of the battery/EV supply chain, new and existing nickel miners do not have a route to market to benefit from battery metal interest. To solve the problem of a lack of midstream investment begetting a lack of new mined output, each step in the supply chain would ideally have both raw material and offtake secured, in a similar way to the joint venture project between Nornickel and BASF in Finland.

The chart below quantifies just how large a gap there is in terms of the availability of NiSO4 and PCAM relative to the quantity of nickel that would be needed to completely fulfil the nickel requirement of the expected regional cell and EV output. More than 100,000 tonnes of nickel contained in PCAM for these end use applications will need to be imported unless investment in both local NiSO4 and PCAM is dramatically ramped up. 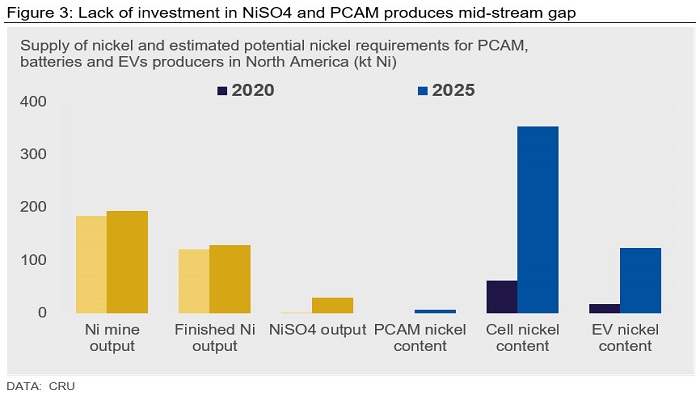 ESG considerations complicate the goal of a regional supply chain

Beyond creating a secure supply chain is the pressing need for automakers to comply with decarbonisation goals. In North America, the US is well behind the curve in terms of doing what is necessary to meet Paris Agreement/COP26 climate change goals. A sign of progress is the Biden administration’s infrastructure plan, passed in November 2021, which pledged $7 billion in grants for the raw materials, manufacturing facilities, and recycling operations needed to grow battery production domestically.

A commitment to US domestic manufacturing is only a small part of the equation, however. Companies will want to craft responsible sourcing requirements and to be able to meet new accounting standards for emissions and other green financing metrics to secure the funds needed for this investment. Facilities are likely to be located near to vehicle-making operations to reduce both the pollution generated by transportation as well as to minimise costs.

How green NiSO4 is depends entirely on the route to output. As the next chart illustrates, nickel sulphate from nickel pig iron matte is, by far, the most emission-intensive process for NiSO4 production, even if only Scope 1 emissions are included. It produces more than twice the emissions than laterite HPAL routes do at this stage and adds much more in Scope 2 and Scope 3 emissions.

The lowest carbon intensity of a major NiSO4 production process is via traditional sulphide concentration, smelting and refining. This route yields a pure nickel metal product which can then be dissolved to produce NiSO4. 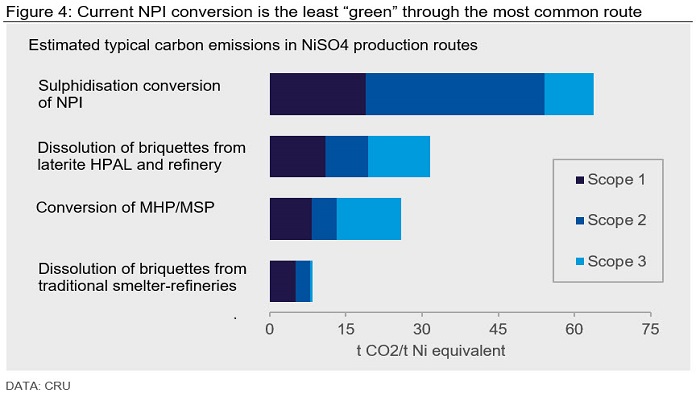 Although consumers want their supply chains to give preference to ‘green’ nickel, this may not be an achievable goal in the near term. ESG sits alongside other procurement objectives and, in a competitive market, consumers are unwilling to rule out certain sources of supply unless they are certain of a secure, cost-effective alternative.

Although the goal of decarbonising and reducing emissions is a higher priority than in the recent past, there is little clarity in terms of where the line will be drawn on quantifying CO2 emissions. Other important ESG metrics, which are even less easy to measure than carbon emissions, increase the uncertainty for future investors in the critical midstream of the supply chain.

In this Insight we have not mentioned recycling spent batteries as an option in securing raw material for new batteries. However, the viability and necessity of this strategy is clearly recognised by the industry, despite the lack of a global standard for material recovery. Redwood Materials, headed by a Tesla co-founder, announced in September 2021 it would create a circular supply chain for battery materials, with an initial focus on anode copper foil and cathode active materials. In November 2021, Northvolt, a Swedish battery manufacturer backed by VW and Goldman Sachs, announced it had produced a battery cell from 100% recycled nickel, lithium, cobalt and manganese. In January 2022, Battery Resourcers, a vertically integrated lithium-ion battery recycling and engineered materials company, announced it will open a commercial-scale, lithium-ion battery recycling facility in Covington, GA which will be fully operational in August 2022. It will be North America’s largest battery recycling site, able to process 30 kt of discarded lithium-ion batteries and scrap annually in order to produce battery grade lithium, cobalt and nickel which can be returned to the regional supply chain. And, most recently, in February 2022, Glencore and Britishvolt announced their intent to build a battery recycling plant in the UK.

It is important to note that recycling – while hugely important to increasing upstream raw material availability and ensuring the sustainability of the EV industry – is unlikely to be able to solve the midstream supply gap issue by itself. This is because for as long as the EV market continues to expand rapidly, the number of cells for EVs being produced in a particular year will always be much larger than the volume of end-of-life batteries available for recycling, since the latter will be a function of the former, lagged by obsolescence period of an EV battery (roughly a decade). As a comparison, even though stainless steel recycling rates have steadily increased over the past 20 years, the dramatic expansion of the market has resulted in a decline in the global proportion of stainless steel being produced from recycled materials.  While this rule of thumb should hold globally, at a regional level it can be distorted by regional trade in either cells, EVs or end-of-life batteries. It is also impacted by changing trends in cathode chemistry.

Recycling is therefore unlikely to be a silver bullet, and collaboration between upstream producers, automakers, and governments will be needed to develop large volumes of upstream and especially midstream (NiSO4 and PCAM) capacity if self-sufficiency in the North American EV supply chain is to be achieved.

For more on the EV battery puzzle, see the following CRU :

The Missing Pieces in the Battery Puzzle - Part 1

The Missing Pieces in the Battery Puzzle - Part 2