The missing pieces in the battery puzzle - Part 2

Regionalisation of the electric vehicle battery supply chain is becoming more critical for the EV transition to occur at scale.

As we discussed in Part 1 of this series, North American and European OEMs are heavily reliant on Asia in the downstream (precursors-cathodes-batteries) and a select number of countries further upstream. For cobalt, this is primarily the Democratic Republic of Congo (DRC), China and increasingly, Indonesia.

A number of drivers, including diversification of suppliers, ESG concerns around convoluted supply chains, and the importance of batteries being close to EV production (for freight cost and safety reasons), will support a continued trend in the regionalisation of battery supply chains.

In this Insight, Part 2 of this series, we will look more closely at the cobalt market.


Cobalt output is currently limited in Europe and North America

Both mining and refining of cobalt is limited in Europe and North America. In 2021, the two regions only contributed 4% of global mined supply combined, and 15% of refined supply. By 2026, this share will decline to 13% for refined supply, despite some volume growth as other countries increase output more rapidly. 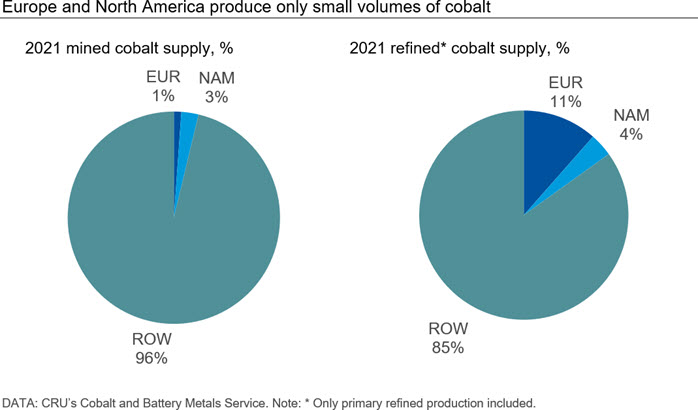 Currently the only European producers are in Finland, totalling 1.8 kt of mined cobalt in 2021. For refining, the major producers are also in Finland at Umicore and Jervois’ Kokkola operation and Nornickel’s Harjavalta; as well as Glencore’s Nikkelverk in Norway, totalling around 18 kt. Refineries in this region source raw materials from a number of sources due to limited local mined production – for example, Kokkola processes cobalt hydroxide from the DRC, Harjavalta from Cuba and its Russian operations; and Nikkelverk imports mined feed from Glencore’s Canadian operations.

In North America, the major cobalt mining operations are at Glencore and Vale’s Canadian assets including Raglan, Sudbury and Voisey’s Bay, with total output from the region of just 4.2 kt. Refined production is marginally higher at 5.7 kt, from Sherritt and Vale in Canada. As well as Canadian material, the refiners also import raw materials, for example from the Moa Bay operation in Cuba.

Refining likely to be the answer in Europe

Cobalt reserves are limited in Europe – the United States Geological Survey (USGS) doesn’t individually list any European countries in its reserve ranking. The closest major reserves are in Russia, with 3.5% of the global total.

Freight routes between the DRC (via South Africa) are relatively straightforward so Europe could benefit from the growing volumes of cobalt hydroxide from the DRC – the world’s largest cobalt producer, which has more than 50% of reported global reserves. To increase cobalt volumes in Europe to serve future battery production, it is therefore likely that refined capacity will lead the way, rather than new mine developments.

Our industry contacts report increasing traction in Europe for potential new refined capacity which is likely to involve partnerships with the DRC to secure raw materials supply. Production from the DRC is forecast to increase by 62 kt over the next five years, accounting for 55% of global growth. It is worth noting, however, that close to 50% of mined supply from the DRC is Chinese-backed and is therefore likely to be refined at existing capacity in China. European ventures will need to secure hydroxide volumes from other players.

An example of this strategy has been demonstrated recently by Jervois. Alongside its investments in the Idaho Cobalt Operations (ICO) project in the US and the São Miguel Paulista refinery in Brazil, it also acquired Freeport Cobalt in July last year. This includes toll refining at Kokkola in Finland and the existing hydroxide feed contracts from the DRC. When ramped up, it will produce around 8.5 kt/y at Jervois Finland and in Brazil to become the second largest cobalt refiner outside of China – second only to Umicore. It is also considering downstream opportunities in precursors, batteries and recycling. We expect to see increasing investment and regionalisation in Europe to increase cobalt volumes and diversify away from Asia.

There are currently no further announced plans – so Europe will continue to rely on refined cobalt from China at least in the medium term. However, this will need to change to support the ambitious battery plans from a number of auto OEMs such as VW, Renault and Nissan.

North America differs to Europe with higher mined output and growth potential in the medium term from the Jervois and Fortune Minerals projects. Regional volumes are expected to double in the next five years, albeit only reaching 8.4 kt (3% of global output). Reserves are more notable than in Europe with 4% of the USGS’s current estimates, primarily in Canada, leaving room for further mine development. Material could also be sourced from Cuba – subject to trade restrictions and sanctions. Refined supply also has upside potential, with a current expectation of 8.4 kt of growth to 2026 from Vale, Electra and Fortune Minerals, to reach around 14 kt of refined production.

We expect to see a combination of mine and refinery development in North (and possibly South) America. As discussed above, Jervois plans to start operations at the Idaho Cobalt Operations (ICO) this year and eventually process material at its Brazilian refinery – another example of regionalisation and shortening the supply chain to supply battery raw materials closer to a major, and growing, end-use market.

Electra (previously First Cobalt) is planning an integrated Battery Materials Park in Ontario, Canada. This will include cobalt and nickel sulphate capacity, a precursor production and Li-ion battery (black mass) recycling. Electra would thus become the first battery grade cobalt producer in North America. It is also looking to develop a cobalt project in Idaho and have recently signed a five-year tolling and supply contract for cobalt hydroxide from Glencore’s DRC operations. This is a further example of cobalt supply developments in North America to support future battery production capacity and downstream integration to improve the efficiency and environmental credentials of the supply chain.

The approach will differ for Europe and North America but both regions will need to invest further in cobalt capacity to support their battery production capacity plans in the medium to long term. Based on current plans, both regions combined will only provide 4% and 13% of global mined and refined cobalt production, respectively, in 2026. In comparison, China will produce 57% of refined cobalt in the same year. 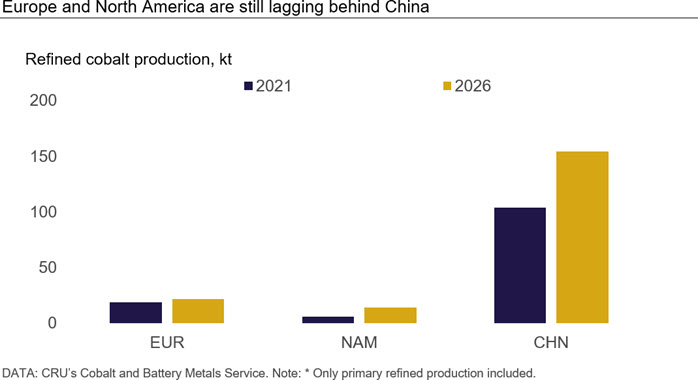 We are already seeing strategic regionalisation shifts in these key regions and this will continue over the coming years to reduce the complexity of the battery materials supply chain and the reliance on Asia.

In the next, and final part of the Insight Series we will discuss similar challenges for the lithium market.