China clamps down on scrap importers 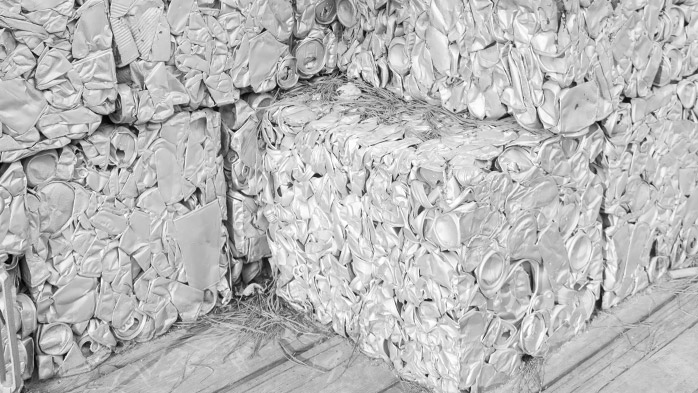 CRU understands that the Chinese government has moved to limit imports of Category 7 scrap types. CRU’s Beijing analysts conducted a market survey, speaking with industry associations, processing facilities, and secondary plants in China so that we can understand the impact these restrictions will have on the copper and aluminium markets.


Our analysis suggests that the policy will have far reaching implications for the copper market and cause the off-shoring of some Chinese scrap processing.  The impact on the aluminium market will be small but the policy will hasten the current trend of increasing domestic scrap generation and it will strengthen the current bullish sentiment in the Chinese aluminium industry.

Our reliable contacts suggest that Category 7 scrap processors who fail environmental inspections this year will be forced to stop importing scrap immediately; those who pass the inspection will be able to continue importing until the end of 2018.

Copper will be affected far more than aluminium.

China will off-shore processing of Category 7 copper scrap
There were doubts about this policies viability when it was discussed in late-2015 because the policy would involve many companies and the impact on the Chinese scrap processing industry would be substantial. China imported 3.35 million tonnes of copper scrap in 2016. We calculate the average copper recovery rate was 43%. More than 50% of Chinese copper scrap imports are category 7 scrap types.

As well the large scrap processors listed above, there are also many other medium and small sized processors who rely on imported scrap as their feedstock.

Chinese scrap processors will be forced to move or build facilities in overseas countries, such as South East Asia, to process these Category 7 into Category 6 (No.1 and No.2 scrap) and then transported this into China.  We have already seen the beginnings of this but this policy would hasten this trend.

As a result of this off-shoring, there will be a sharp decline in the total tonnages of copper scrap that China imports.  However, once Chinese processors have established facilities outside of China and have started to import category 6 scrap instead, the grade of copper scrap will be higher.  Ultimately, there may be only limited changes in the absolute tonnages of copper that China imports in its scrap.  In short absolute tonnes of scrap will decline but imports of purer scrap types will rise.

Scrap discounts for Category 6 and Category 7 will be affected
In the short term, the discount for Category 7 might widen as China moves out of this market.  However, discount of Category 6 will narrow as the Chinese market demands more of these cleaner scrap types. Also some scrap processing companies will turn to the fledgling domestic market.  This could tighten this market, causing higher scrap prices and encourage higher generation rates.

Chinese importers will need to apply for a quota from the government for importing Category 7 material.  This will prevent them from importing material to grow stock levels. Importers need to use more than 50% of their previous quota before applying for a new quota; this will become even more stringent in the future. 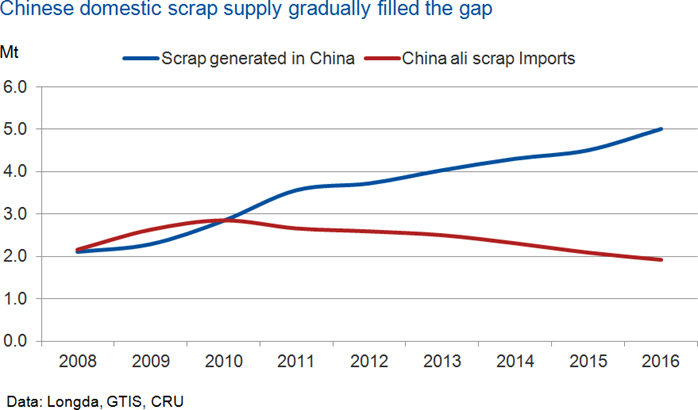 The Chart above shows that Chinese aluminium scrap imports have been declining for some time and domestic generated scrap has been growing by more than the decline in imports.   Chinese scrap imports declined by 26% to 1.92Mt in 2016 from 2.59Mt in 2012, while Chinese domestic generation of aluminium scrap has grown by 34% to 5.0Mt in 2016. The vast majority of this scrap goes into the production of secondary aluminium, mainly being used to produce cast aluminium parts for under-the-bonnet application in the automotive markets.

There has already been a major shift among many secondary producers in China; companies such as Longda, Chongqing Sigma rely on the domestically generated aluminium scrap for all their feedstock. The import restriction will be felt most acutely by plants that are imported scrap for tolling business; these are mainly located in Guangdong area.

China imported 1.07Mt of aluminium scrap in H1 2017. Assuming that China imports 2Mt in the year as a whole, and that 25% is Category 7 material, then these can relatively rapidly be filled in by domestic generated material.

Overall, this policy is not a game changer for the Aluminium market but will reinforce the already positive in the market. In the longer term, the policy will encourage domestic generation at the expense of imports, hastening rather than changing the underlying trends already at play.