China: Era of cost deflation is over for primary aluminium 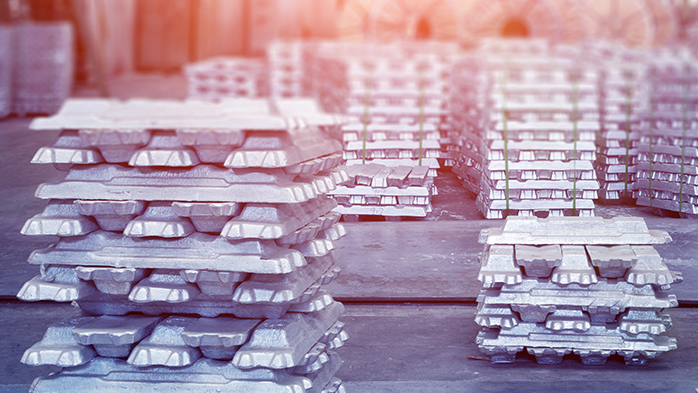 Chinese aluminium business operating costs have been in decline since 2011. Indeed, we have seen average Chinese smelting costs decrease by 37.1% between 2011 and 2016, as shown in the left-hand graph of the following chart. However, Chinese operating costs have started to rise in recent months, and are anticipated to start rising y-o-y from 2017.


Producer prices in China rose in September for the first time in nearly five years, gaining 0.1 percent from a year earlier. Rising domestic prices of steel and coal, amid the government's push to cut excess capacity, helped boost producer prices, as shown in the right-hand graph of the following chart. China's producer price index is expected to continue to increase year-on-year in the coming months. The Purchasing Price Index for the nonferrous metals industry also showed the same trend, which reflects upward moves in the delivered prices paid by industrial enterprises purchasing raw materials, fuels and power from the market, or from other energy or raw materials producing enterprises. 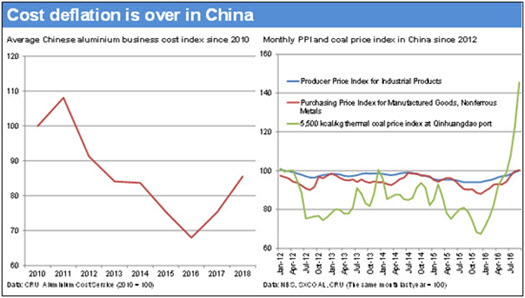 CRU's recent coal mine visits in China lead us to conclude that production controls will continue through next year. However, the enforcement will be adjusted in order to achieve a balanced market. Thermal coal prices are expected to ease from their current multi-year highs. However, with thermal coal prices having risen, and expected to average higher in 2017, the power generation costs for aluminium smelters with captive power stations is anticipated to increase on a y-o-y basis. Some Chinese companies have both aluminium and coal assets, and one might imagine that these companies would be isolated from market coal prices rising. However, in reality, aluminium smelters with captive power stations need to pay market prices to their coal suppliers, even though they belong to the same company.

A wide variety of power market reforms have been implemented across China in recent years. Chinese aluminium smelters that purchase electricity from the grid have benefited from a series of new power policies, including direct power purchasing, reduction in transmission charges etc. Much of this reform has already passed though to the benefit of many primary aluminium producers in China. CRU does not see any significant further reductions in power tariffs for Chinese smelters next year, specially under the current high coal price situation. Some aluminium smelters with captive power stations may still gain advantage from avoiding the government funds in their power price that they should pay, which could make the power market unfair for other large power consumers that purchase electricity from the grid. If the Chinese government reinforces to levy these government funds on these aluminium smelters with captive power stations, there is a possible further increase in their power cost in the future.

Additionally, China will be instating a new nationwide carbon emission trading system from next year. Although CRU understands significant allowances will be given to manufacturers during the first stage, these allowances are likely to gradually decrease, meaning that power tariffs should be under upwards pressure over the next few years.

Logistics cost are also very important for Chinese companies. China estimates its logistics costs as representing about 16% of its GDP in 2015. That's much more than double the 7.9% percent of GDP in the US. Most recently, the Ministry of Transport of China published new Regulations of Highway Administration for Overload Vehicles, which has been implemented from September 21, 2016. According to CRU's latest survey, the impacts on logistics costs vary among provinces, due to implementation and varying freight requirements. Road freight costs have risen by over 30% in Shanxi province after the overload restriction policy. At the same time, the transport tariff by rail has also been increased, especially for coal. Rising road and rail freight logistics costs have driven up prices of all kinds of raw materials, including bauxite, alumina and other commodities.

CRU also expects the RMB to experience modest depreciation in 2017. Although it is helpful for Chinese manufactures to export more goods to the rest of world, it will increase the cost of imported alumina and bauxite for the Chinese aluminium industry. The expected increase in alumina refining costs and the strong demand for alumina from more smelting capacity in China will continue pushing alumina prices upwards.

Average business costs of aluminium smelting in China are now rising notably, and in 2017 the BC will likely average 10.6% higher than in 2016 based on CRU's latest base case assumptions for raw material input prices. The higher costs are a combination of higher power prices as a result of thermal coal price increases, higher alumina and other raw material prices, plus the impact of increased freight costs. The era of cost deflation for the Chinese aluminium industry looks to be over for now.