At the end of April, the Chinese government announced that it will be conducting a nationwide investigation to crack down on tax fraud.


Similar actions have been taken in recent years to prevent a reduction in government tax revenue, but square bar exports from Tianjin and Hebei have come under particular scrutiny this year. Exports of certain alloyed-steel products qualify for a VAT rebate, and government authorities allege that a large amount of billet has been disguised and exported as an alloyed-steel product in the form of square bar to benefit from a VAT rebate. This not only conflicts with the government’s intention to export value-added products, but also hurts multilateral trade relations.

It was previously said that eleven major billet exporters in Tianjin and Hebei were under investigation, and that their bank accounts were frozen by the government. The tax bureau supposedly deferred all VAT rebates for shipments dispatched in the past several months, while China’s customs authority gave a red light to any shipment due for export in June if there was any concern that the product was being incorrectly declared as square bar. However, the most recent trade data does not support that information. In fact, instead of contracting in June, net exports of square bar surged by 35% m/m, reaching an all-time high.

The incentive for billet exports under the name of square bar
The act of exporting billet under alternate trade codes is incentivised by VAT rebates of up to 13% which apply to certain value-added steel products, namely those that contain alloying elements. In contrast, billet is considered a primary product, and billet exporters are required to pay a 20% export duty on top of the basic VAT rate of 17%. Although calculations are always more complicated in practice, a simple sum up of the 13% VAT rebate and the 20% export duty leads to a 33% difference between billet and value-added products.

Though large volumes of billet exports have been leaving China since 2013, the classification of that material has changed considerably. Bar and rod products containing a minimum 0.0008% boron fall under HS code 7228.3010, and in 2013 exports under this code started to surge as exporters spotted a way to circumvent duties, using this trade code to qualify for VAT rebates. However, the government suspected that a large amount of these exports were actually billet and from 1 January 2015, boron-containing steels no longer qualified for a VAT rebate. The market was quick to respond, and as boron-containing exports came to a halt, exports under HS code 7228.3090 which require a minimum chrome content of 0.3% rose sharply, allowing exporters to once again qualify for the VAT rebate.  Taking a closer look at the exports under the code of 7228.3090, volumes from Tianjin and Hebei surged in 2015 and reached about 70% of total exports in the first half of 2016. 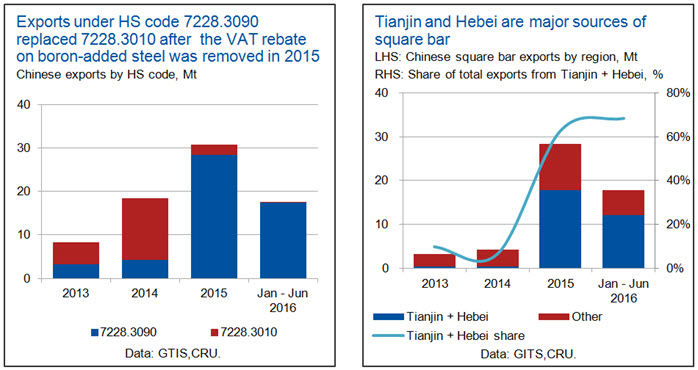 Although square bar usually has a smoother surface because of the rough rolling process and contains some alloys, it is not easy to discern the two products from one another in appearance.  In addition to the similarity in appearance, insufficient pre-shipment inspections on chemical composition also emboldened exporters to export under a square bar trade code.

The possible impacts of the investigation
This raises the question: to what extent will the investigation impact the global steel market? For China, the impact is likely to be much weaker than previously expected, evidenced by the strong export data in June. Even if the government had put stricter regulations in place, the impact would have been short term rather than long term as, in the longer term, billet can be further worked into real square bar and continue to be exported. As we see in the following graph, Far East Asian import prices for billet sourced from the CIS have carried a stable premium over Chinese-origin billet with only a few exceptions. The average premium over the most recent 19 months is $16/t. Supposing Chinese mills further process billet into square bar, additional costs can still be controlled at around $16/t. In addition, longer lead times are generally associated with CIS-origin billet compared with that from China. In other words, real square bar from China will remain competitive relative to CIS-origin billet once Chinese mills adapt their operations.

In the short term, the impact could be material if the government decided to take a harder stance on the issue.  Total Chinese exports under the code of 7228.3090 came to nearly 18 Mt in the first half of this year, equivalent to a monthly average of around 3 Mt.  If we simply assume all products declared in Tianjin and Hebei are billet rather than square bar, billet exports have averaged 2 Mt on a monthly basis.  In other words, if mills maintained current production levels and that billet was retained inside China, there would be significant downward pressure on domestic steel prices.  From another angle, the dollar amount of 2 Mt of billet is above $600 million at current prices.  If billet production due for export continues but is retained by the customs authority, this may hurt the industry more seriously in the near-term given tight credit supply in the steel industry in China. 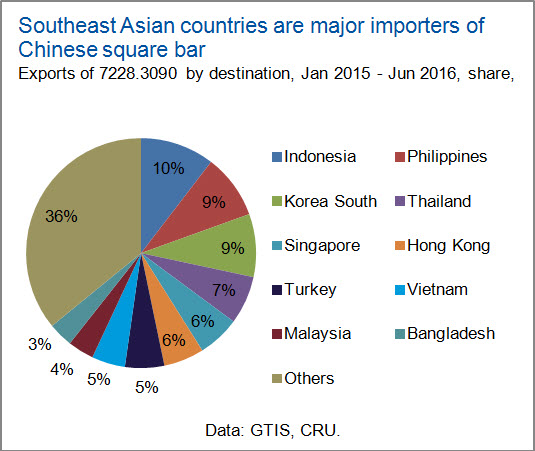 Southeast Asian countries, who are major importers of Chinese billet, could also be impacted. Six out of the ten top importers of the product under HS code 7228.3090 are Southeast Asian countries, whose imports accounts for 40% of total Chinese exports. Given a high reliance on Chinese material and concerns about the sustainability of Chinese exports, some traders in those countries have already started to seek replacements from other countries like Russia. If this continues, buyers in those countries may have to accept a 5-10% increase in billet prices.

Explore this with CRU
Want to read more? Register to continue reading and gain access to all CRU Insights