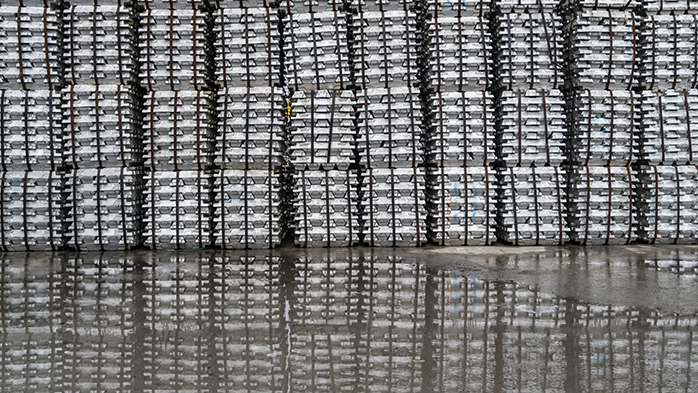 
In China, reported stocks are largely reflective only of ingot stocks at SHFE warehouses and other registered sheds. The only other element of reported stocks is State Reserve Bureau (SRB) stocks. However, CRU recognises that there are considerably more stocks in the Chinese market than implied by reported stocks. Stocks will be held at smelters, while valued added shape stocks will also be held at independent operations that produce casthouse shapes such as billet. This has increased in importance as smelters have increasingly reduced the proportion of output at their casthouse of ingot in favour of liquid metal to supply directly to adjacent downstream facilities, and other casthouse shapes. Stocks will also be held in transit, and this has increased in significance since capacity has shifted to regions such as Xinjiang and Inner Mongolia and away from traditional sources of consumption.

CRU believes that it is important to focus on a number of key issues that affect the inventory level of ingot in the market, and how it may not always fully reflect the state of the market. 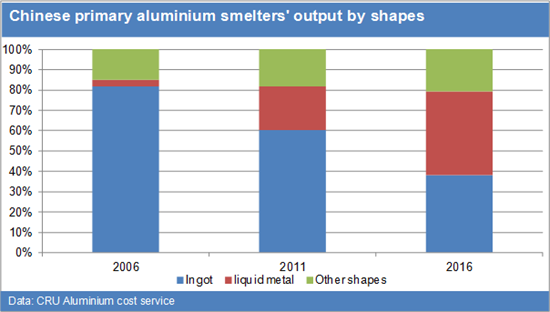 Changes in smelter product mixes have been significant over the last decade. CRU's value-based costing methodology is based upon us understanding each smelter's product mix around the world. According to our first hand research for our aluminium cost analysis, liquid metal is expected to become the biggest output form from Chinese smelters in 2016, accounting for 41% of total aluminium production in China.

Other casthouse shape products from Chinese smelters, including billet, slab, foundry alloy, CC rod and CC strip, will account for 21% of total aluminium output in 2016. The proportion of aluminium ingot has decreased significantly over the last ten years, to 38% from 82% in 2006 and 60% in 2011. In terms of quantity, the primary aluminium ingot produced between 2011 and 2016 is at a similar level, at around 12Mt. During the same period, the total Chinese primary aluminium output has been increased by over 12Mt. As such, it becomes clear the growth in smelting production has come from value-added casthouse products and liquid metal rather than ingot.

A more recent issue has been the change in transportation standards that has affected aluminium deliveries. As we have noted, in recent years, most greenfield aluminium projects have been located in northern or north-western China. These smelters are located far away from major regions that consume the metal. The transport of metal is affected by a variety of factors, such as the weather, changes in transport capacity, and government priorities during national holidays, which prioritise the transport of people and food.

For example, in Xinjiang, the smelters have to rely on the railways to ship their metal. However, the available transport capacity by rail is not always enough. For example, when fruit or cotton needs to be transported to other provinces from Xinjiang, other products, including aluminium ingot, will not get priority over them. The decrease in ingot inventory in southern or eastern China will be temporary, and give a false signal. <''>Most recently, the Ministry of Transport of China published new Regulations of Highway Administration for Overload Vehicles, which has been implemented from September 21, 2016. If this new regulation is fully implemented, it will definitely increase road transport costs, probably by around 30% based on CRU estimates. It will also drive the railway transport capacity even tighter in some regions. The metal delivery time to the warehouses will become uncertain and longer, which will affect the aluminium ingot inventory in Chinese markets.

The impact on ingot inventories has been dramatic. Inventory at warehouses tracked by CRU fell from 258.7kt from 327.1kt between mid and late September, causing a significant spike in physical market prices.

Environmental pressure also affects the demand for aluminium ingot in China. The Chinese government has encouraged downstream producers to use liquid metal or value added shapes directly rather than remelting ingots. It can reduce the energy consumption and CO2 emission. CRU understands some downstream producers in southern China have removed or built their billet casting lines nearby some smelters in other regions in order to directly use liquid metal. Many third party billet suppliers make it possible for some aluminium extruders to purchase billet rather than make billet.

In future, CRU expects ingot output from Chinese smelters will continue to decline. In China, many aluminium industrial areas will be formed, which will cover the power-aluminium-downstream value chain. Some of them will even include bauxite and alumina. In these industrial areas, liquid metal will be used by downstream companies and/or more value-added casthouse shape products will be produced by smelters. Under such circumstances, more inventory will be held in the form of casthouse products.