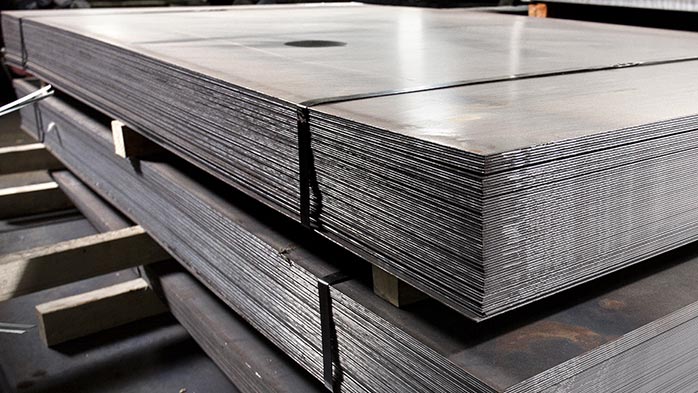 China’s high-carbon ferrochrome (HC FeCr) smelters see the prospect of making a profit once again. Price signals effectively told smelters there was too much supply in the market during Q2. That message changed dramatically in July.


CRU believes that most smelters are profit making at current input prices. Various factors—primarily good underlying demand for stainless steel in China and the existence of sizeable chrome ore stocks—should make market conditions less volatile than they have been so far in 2017.

Chinese HC FeCr tender price rebounds 30% in July
Recent events have confirmed the Chinese chrome market’s tendency for volatility. Within the last week, Baosteel, one of China’s largest stainless steel producers, increased its July tender price for HC FeCr by 30% month-on-month. This effectively undid the reduction in the tender price that took place in June. At the same time, chrome ore prices in China have been rallying, despite the fact there is more material at Chinese ports than at any time since H2 2015, which, unlike today, was a period when chrome ore prices were in decline.

Analysis of the cost of production of Chinese HC FeCr gives some insight into what is happening in the Chinese market. CRU’s Ferrochrome Cost Data Service, which was released last week, showed that in June HC FeCr spot market prices fell well below marginal production costs. No HC FeCr smelter in China was capable of making a profit while China’s largest stainless steel mills were offering less than 65ȼ/lb DDP (ex-VAT) for their monthly tender purchases (see chart 1). As a result, there was a sharp reduction in Chinese HC FeCr supply between late May and June.

Additionally, the decline in Chinese HC FeCr prices persuaded some of South Africa’s charge chrome makers to instigate deeper cuts to their planned production between July and August, months in which they face paying a significant premium on electricity prices. From being in substantial surplus in Q2, the global HC FeCr market is set to slip into deficit in Q3. 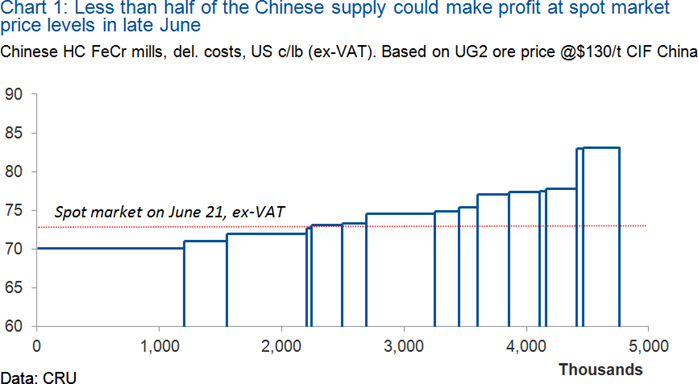 As a result, CRU felt that the Chinese stainless steel market was in a position to rebound reasonably quickly—we identified late Q3 as a probable turning point. Within the last two weeks or so, however, we have seen the Chinese stainless steel market’s potential to be acutely affected by events. The end of government environmental inspections, which affected manufacturing in a number of provinces during May and June, triggered downstream demand for stainless steel. Nickel prices also rallied by around $600/t over the second half of June. The combined impact of these two developments led to an increase in Chinese 304-grade stainless steel prices that, in CRU’s view, went beyond this rise in nickel prices alone.

Chrome price rally will be constrained by ore stocks
CRU understands that mill orders for July are up month-on-month. Mills that were running below capacity in May are now returning to normal; stainless steel output could top 2mt for the month. Consequently the message being given by mills to HC FeCr smelters is that greater supply will be needed in the near term. At today’s chrome ore prices, CRU estimates that at least 80% of Chinese HC FeCr supply is profitable on sales linked to Baosteel’s tender price (see chart 2). That is quite a change on the picture in May and June, when stainless steel mills effectively told HC FeCr suppliers they would have to sell at a loss.

In CRU’s view there are a number of near-term conditions that should favour relative price stability. Most importantly, there is no shortage of chrome ore in China at present, in spite of the recent rise in prices. Some of this ore will have been purchased at a price well above the current market—this material might be effectively withheld from the market until price rise again substantially.

However, little of this stock is being held directly by Chinese smelters. This means they have a free hand in the short term to resume chrome ore buying, safe in the knowledge they stand a decent chance of making a profit at current HC FeCr spot market prices. And if chrome ore prices do go on rising in the near future, they would come under corrective pressure as currently idle ore stock would be encouraged to flow back into the market. As a result, we see the current upside in HC FeCr and ore prices being capped at around 10¢/lb and $40-50/t, respectively, above today’s prices. 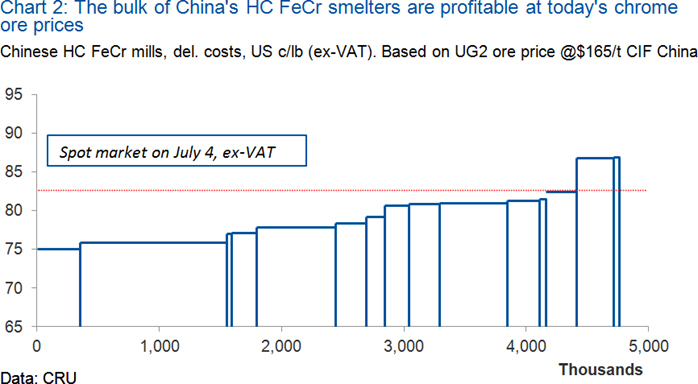